November 19, 2019
Stari Grad on island Hvar is a beautiful historical city. Its name, meaning old city, couldn't be more appropriate. In fact, Stari Grad was formed the same year Aristotle was born in! Moreover, the connection with the ancient Greeks doesn't stop there. This city was actually formed by Greek colonists from island Paros who came here looking for a safe place to live after a natural catastrophe destroyed their homes. In this secluded bay, the ancient Greeks found both safety and beauty. They named this city Faros. This stunning port city, Aristotle's contemporary, can boast with five thousand years of continuous urban tradition. It is also an amazingly beautiful, authentic and picturesque touristic destination. More than five thousand years of urban tradition is not something you see every day. Walking these streets, you can really breathe in history and culture. Autumn is a great time to visit but winters are also pretty mild here, so a winter stay makes sense too. 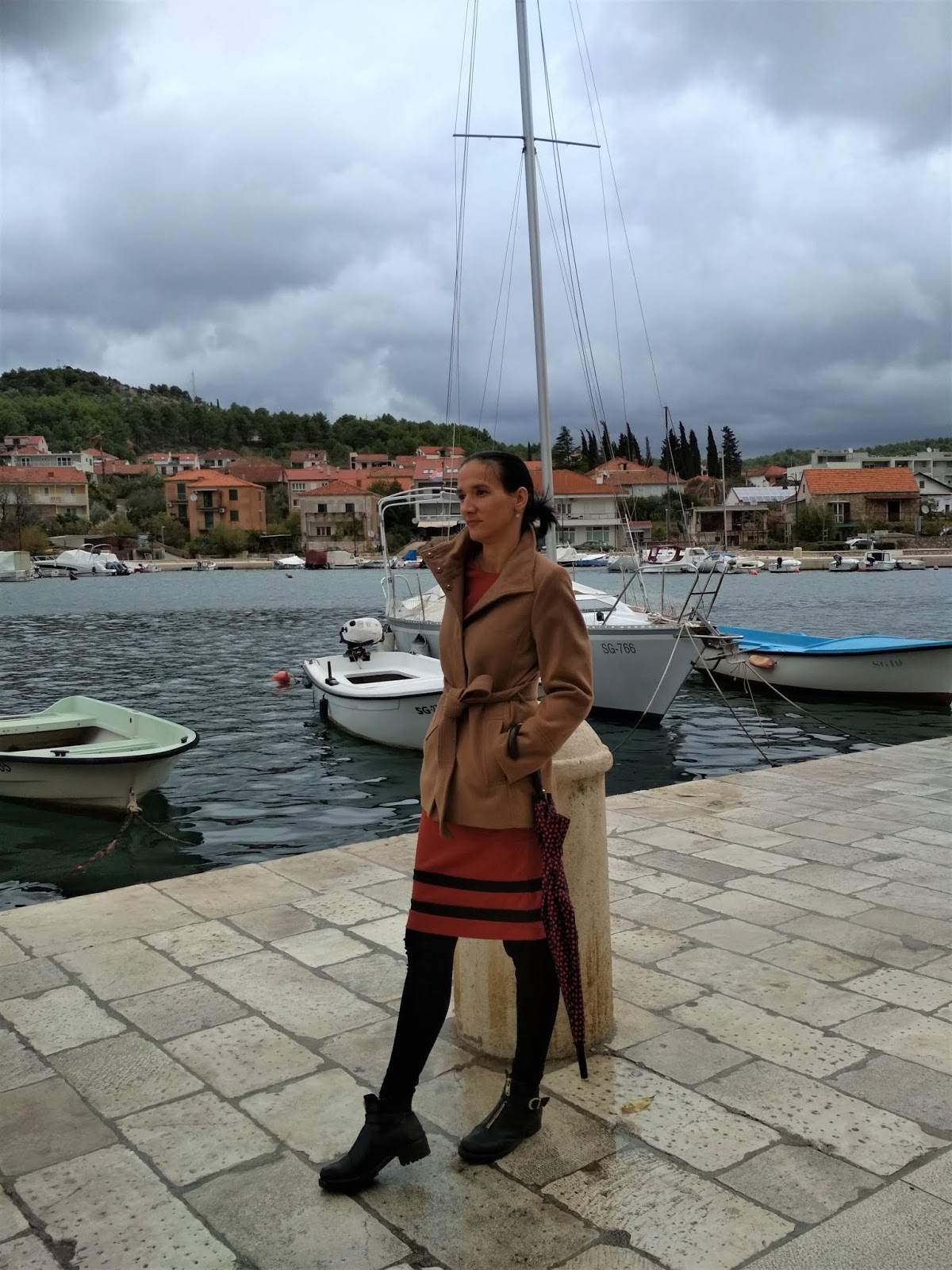 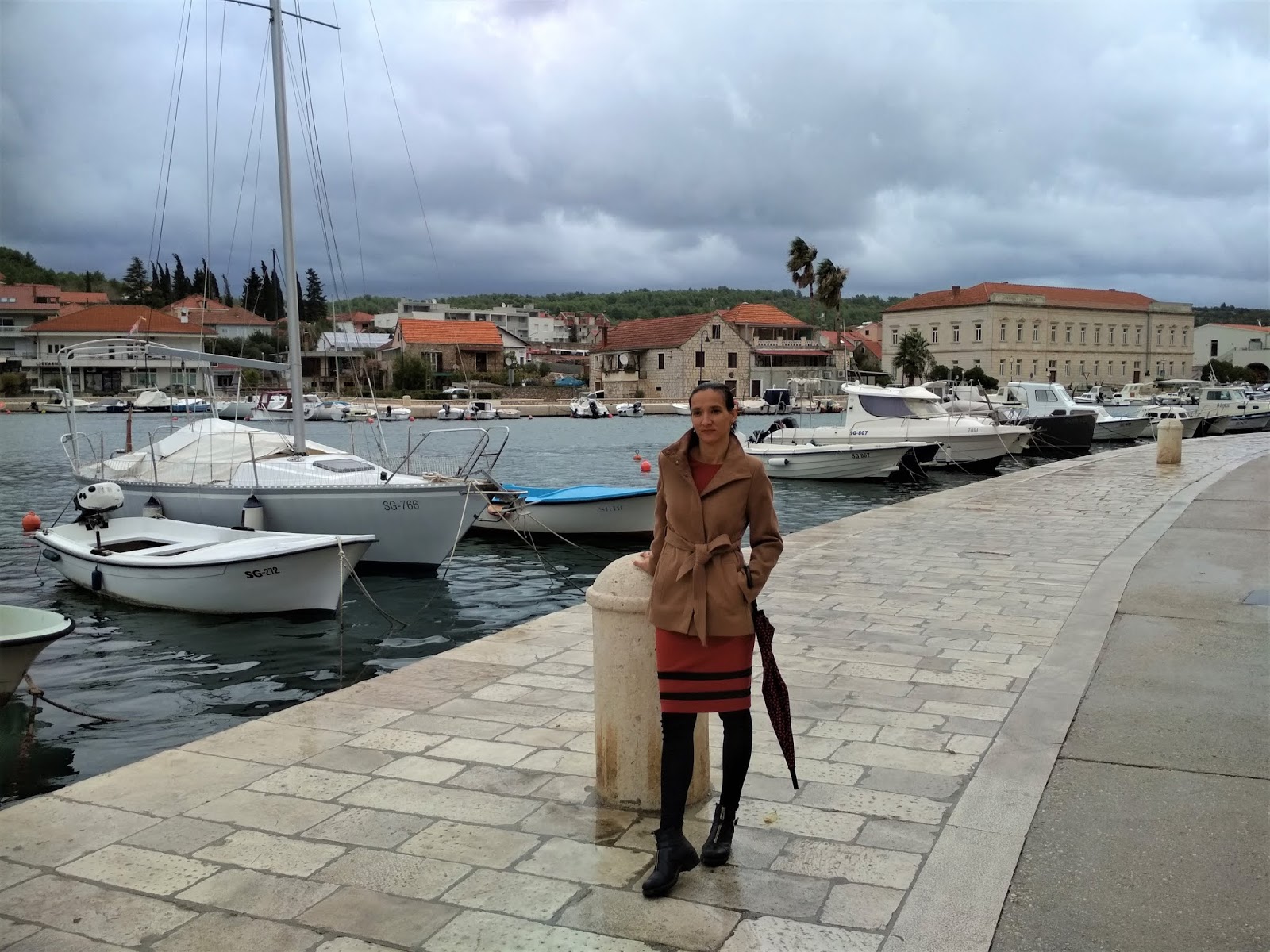 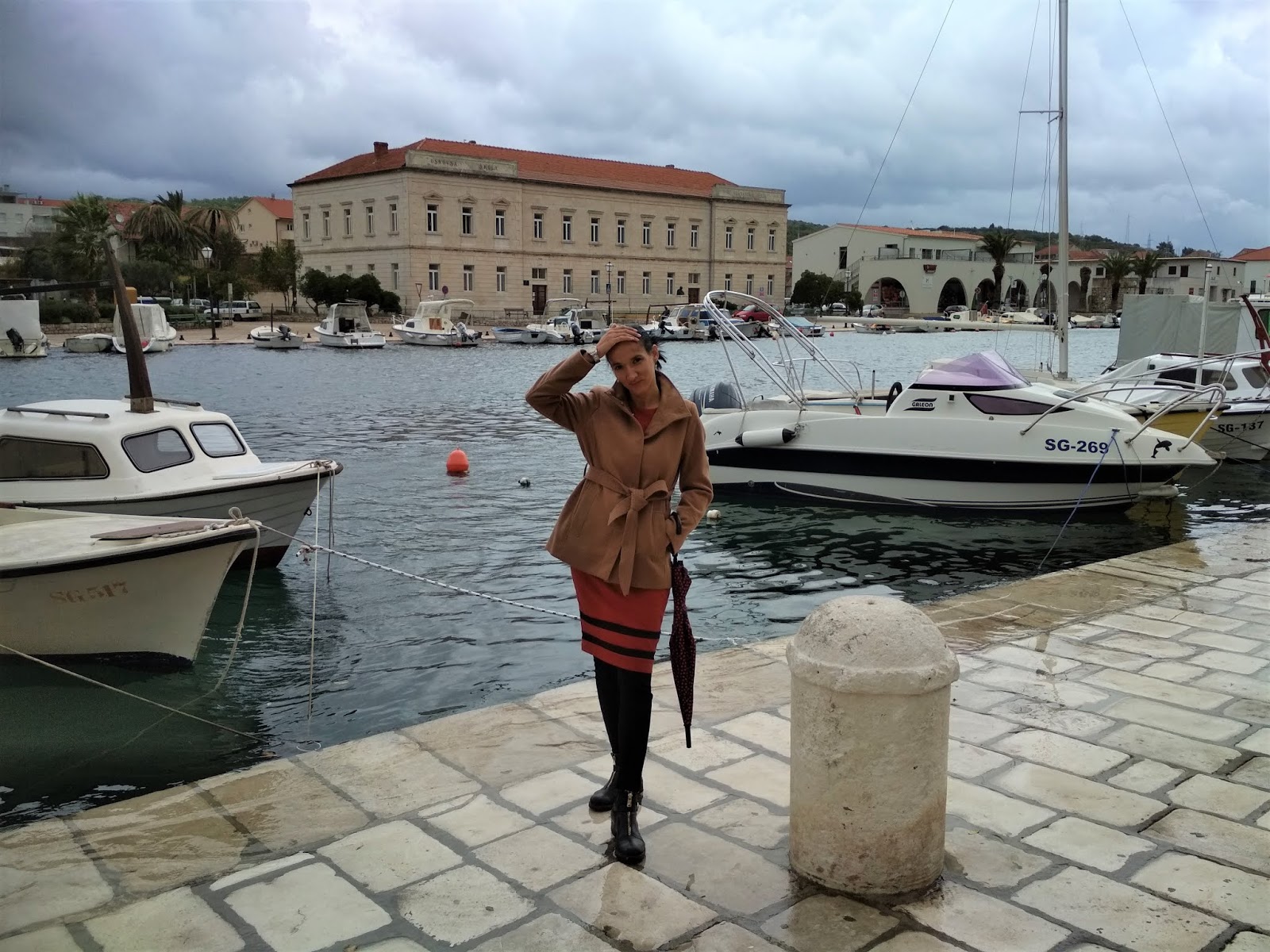 As I explain Stari Grad (old city) is indeed an appropriate name for this city, for it is the oldest city in Croatia. In fact, it is one of the oldest cities in Europe. Being such a historical treasure, it is protected by UNESCO. Originally island Hvar was populated by Illyrians, an ancient Indo-European tribe that didn't survive as such but is preserved in genetic mix of this area. Stari Grad city was originally founded by the ancient Greeks from the island of Paros in 384 BC. The Greeks were not the first people that had lived there. I already mentioned the Illyrians but the history of this island goes even further into the past, to the eve of mankind we could say. You see, the neolithic tribes lived there between 3500 and 2500 BC. At any rate, the ancient Greeks were the first who had formed a formal city.  As you may know, the culture and cities of the ancient Greeks were quite advanced for its time. I'm not sure how familiar with the history of the Adriatic you are, but long story short, the ancient Romans took the city from the Greeks with the rise of the Roman Empire. Later on, Croats (Slavic tribe) took it from the Romans when some of them settled here in the 8th century. During history Stari Grad city was placed under Venetian rule for a number of years. In the 16th  century Stari Grad was attacked twice by the Turks. Furthermore, some parts of the city were burned in the second attack. Those parts were slowly rebuild in the following centuries and the town has grown very prosperous because of the sea trade and agriculture. Today the population of the city isn't numerous in the colder months, but during the warmer months, this city is visited by many tourists.

THE CHURCH OF SAINT ROCH
The church of saint Roch is not large, but what it lacks in size, it makes up for in charm. Named after the patron saint of Stari Grad city, this beautiful little church dates back all the way to the 16th century. You can find it located in the vicinity of Hektorovich's Tvrdalj and not far from the bay. 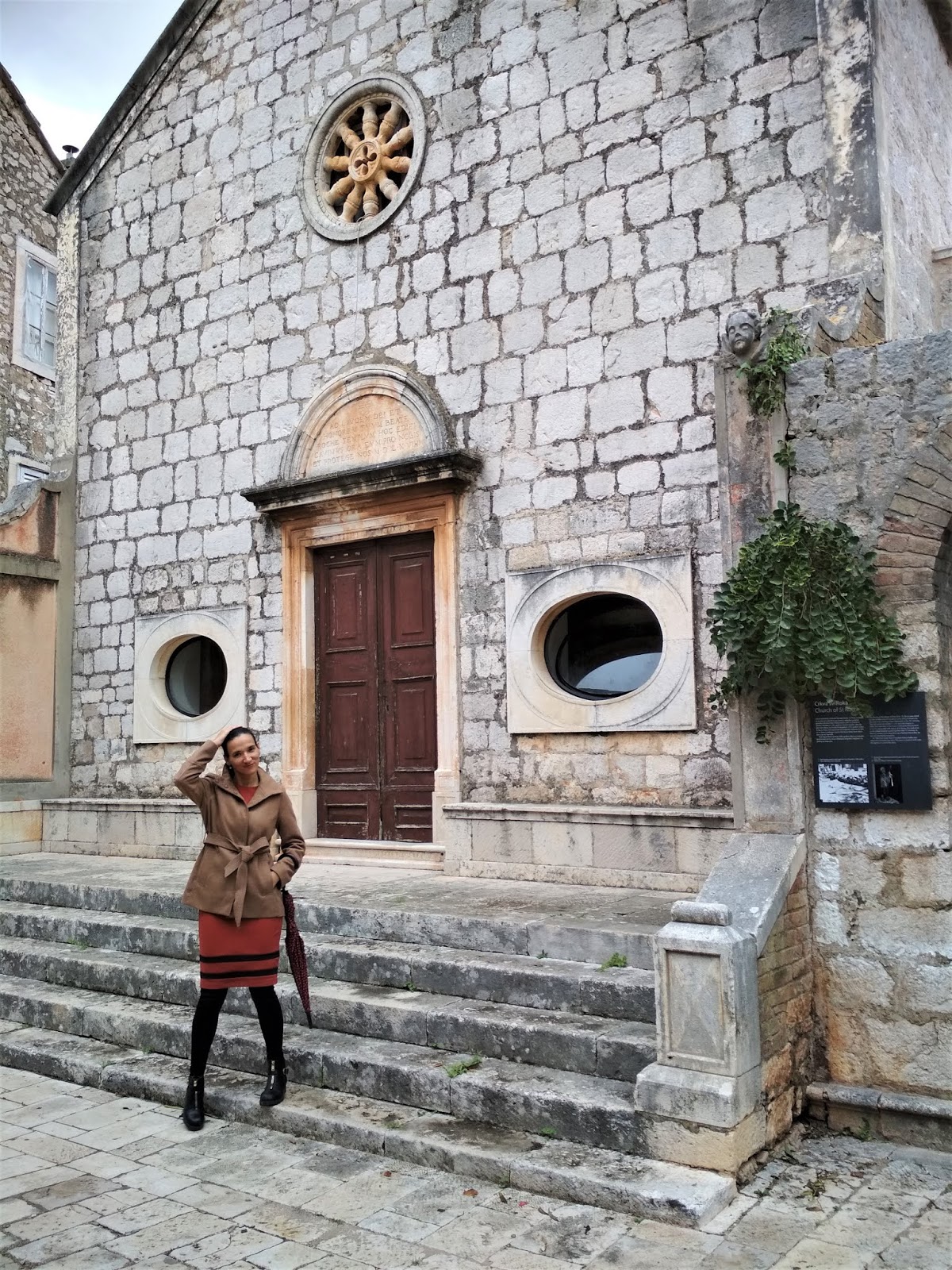 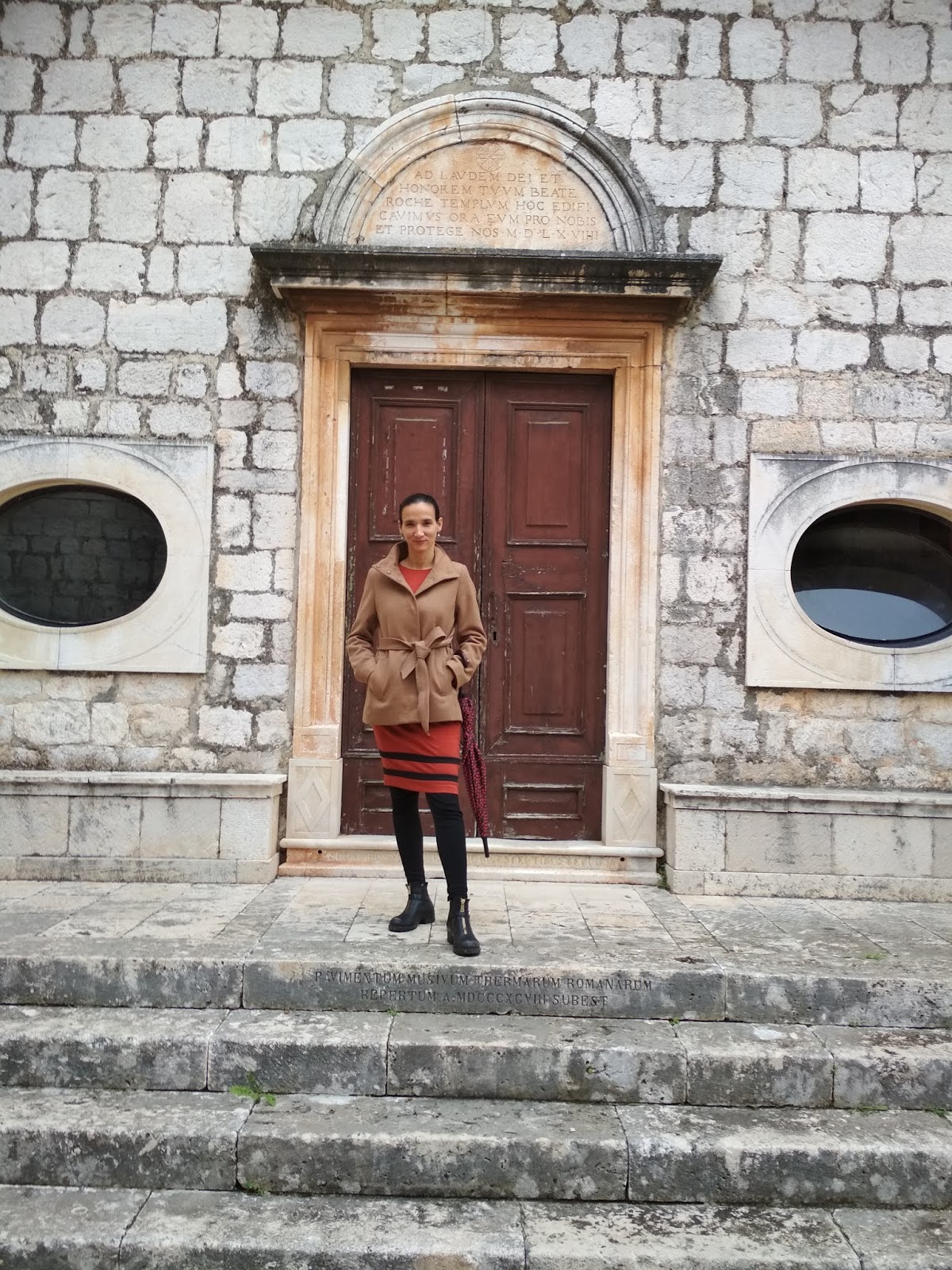 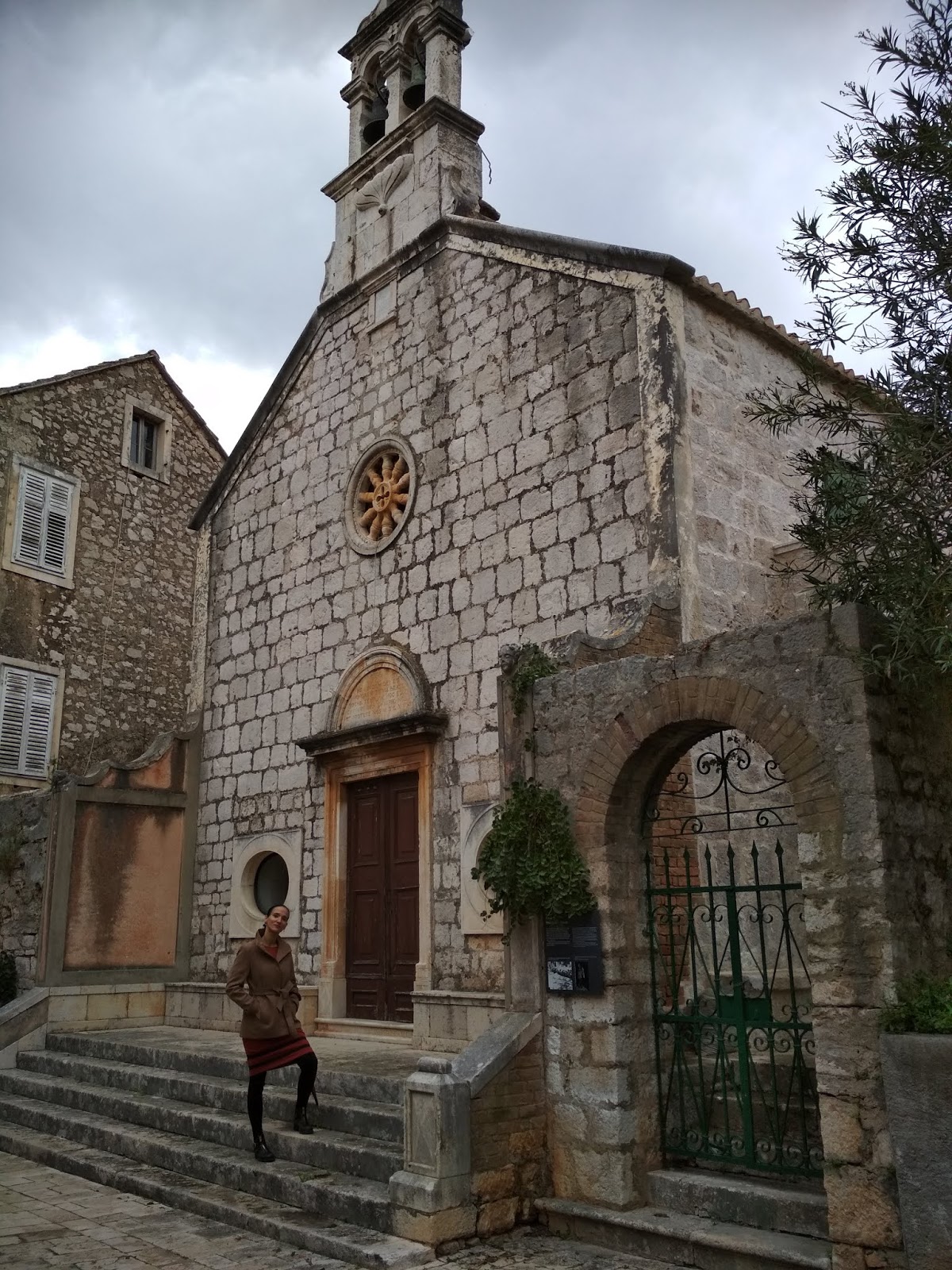 THE CHURCH OF SAINT PETER THE MARTYR AND DOMINICAN MONASTERY
One of the first things you'll notice about the church of saint Peter the martyr (and the accompanying Dominican monastery) is the fortified part of it. My husband is really amazed by how many fortified  churches (and even some church fortresses) there are on island Hvar. If you have read my earlier posts about the Turkish attacks on this island, you'll understand why the churches were fortified. In this beautiful historical church you can find the tomb of a famous Croatian Renaissance poet and noble man Petar Hektorovich. This church was founded in 1482. The accompanying Dominican monastery holds a collection of old works and writings, including writings in ancient Greek. 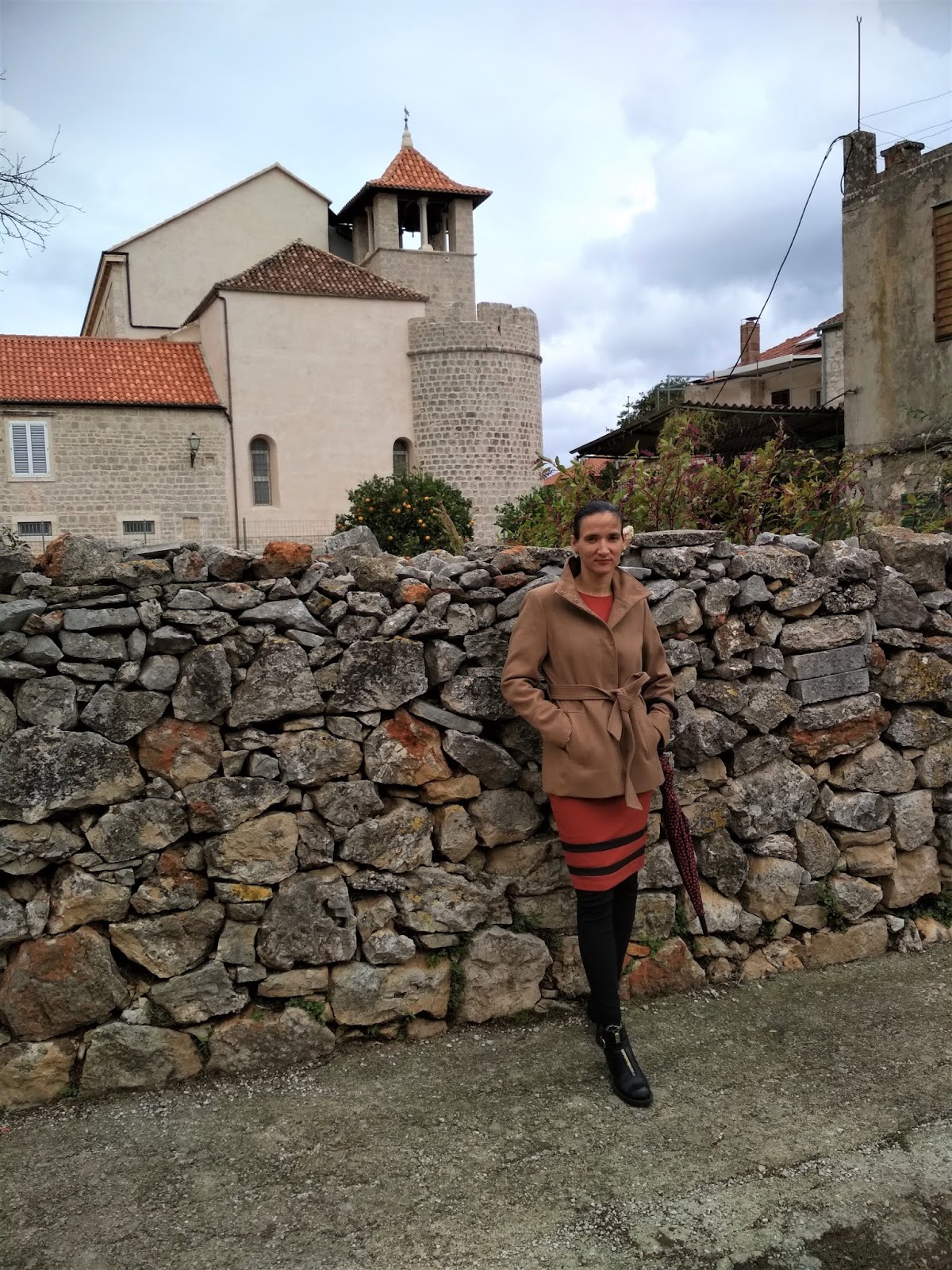 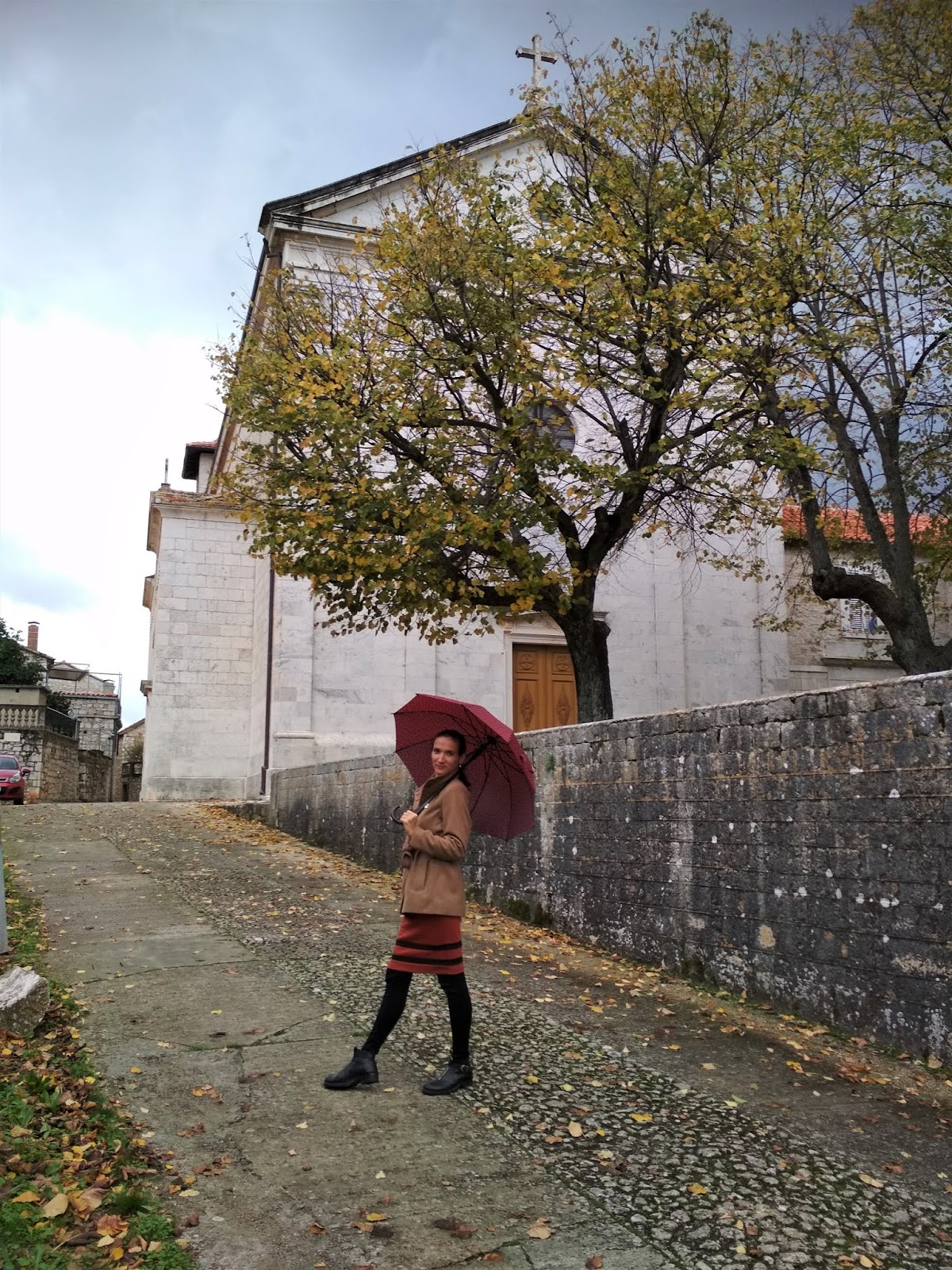 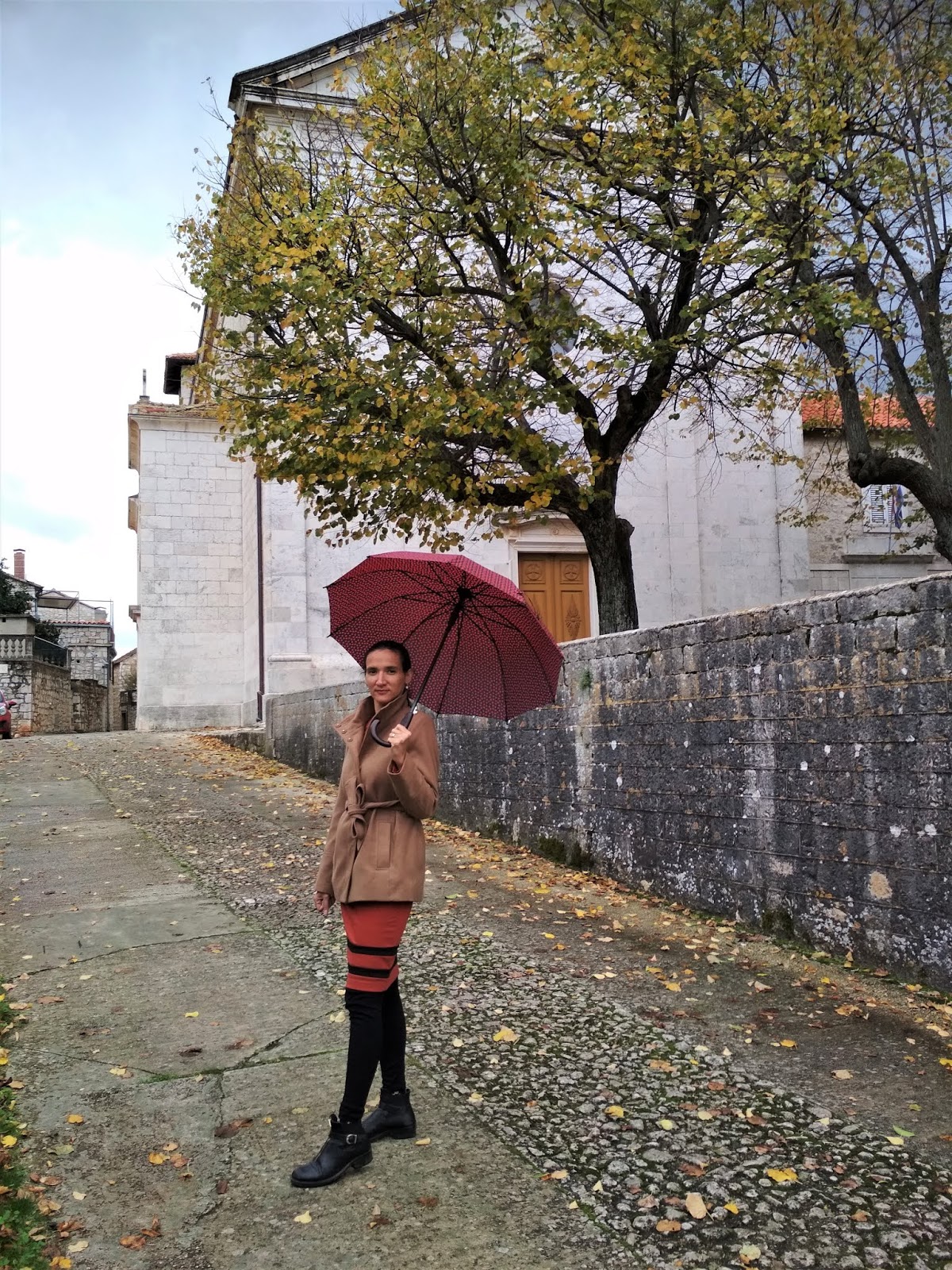 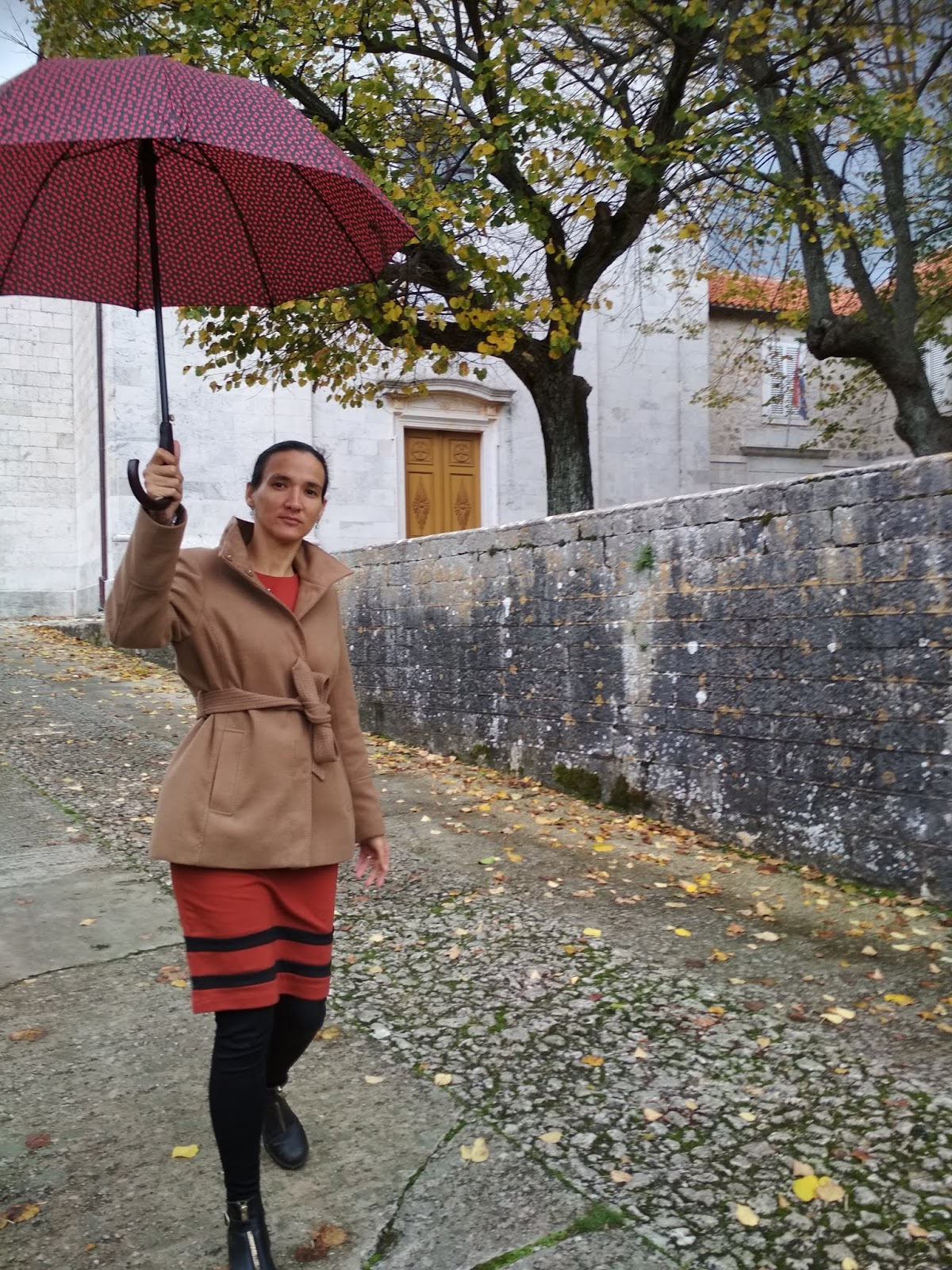 WHERE TO EAT IN STARI GRAD?  BISTRO KOD DAMIRA
Not all the restaurants remain open during autumn and fall. So, the culinary offer is typically not as varied in the colder months as it is in summer. Fortunately, there are exceptions to the rule.  We were fortunate to stumble on this cult little restaurant named 'Bistro kod Damira' that specializes in local cuisine. They remain open all year around and their selection of dishes is really impressive. There is a daily offer and it is wonderfully versatile. We really enjoyed dinning there. Both the service and the food were amazing. I had fish soup and grilled veggies and my husband had beans with a sausage. I will probably revisit it, for you can't beat friendly service and great food. 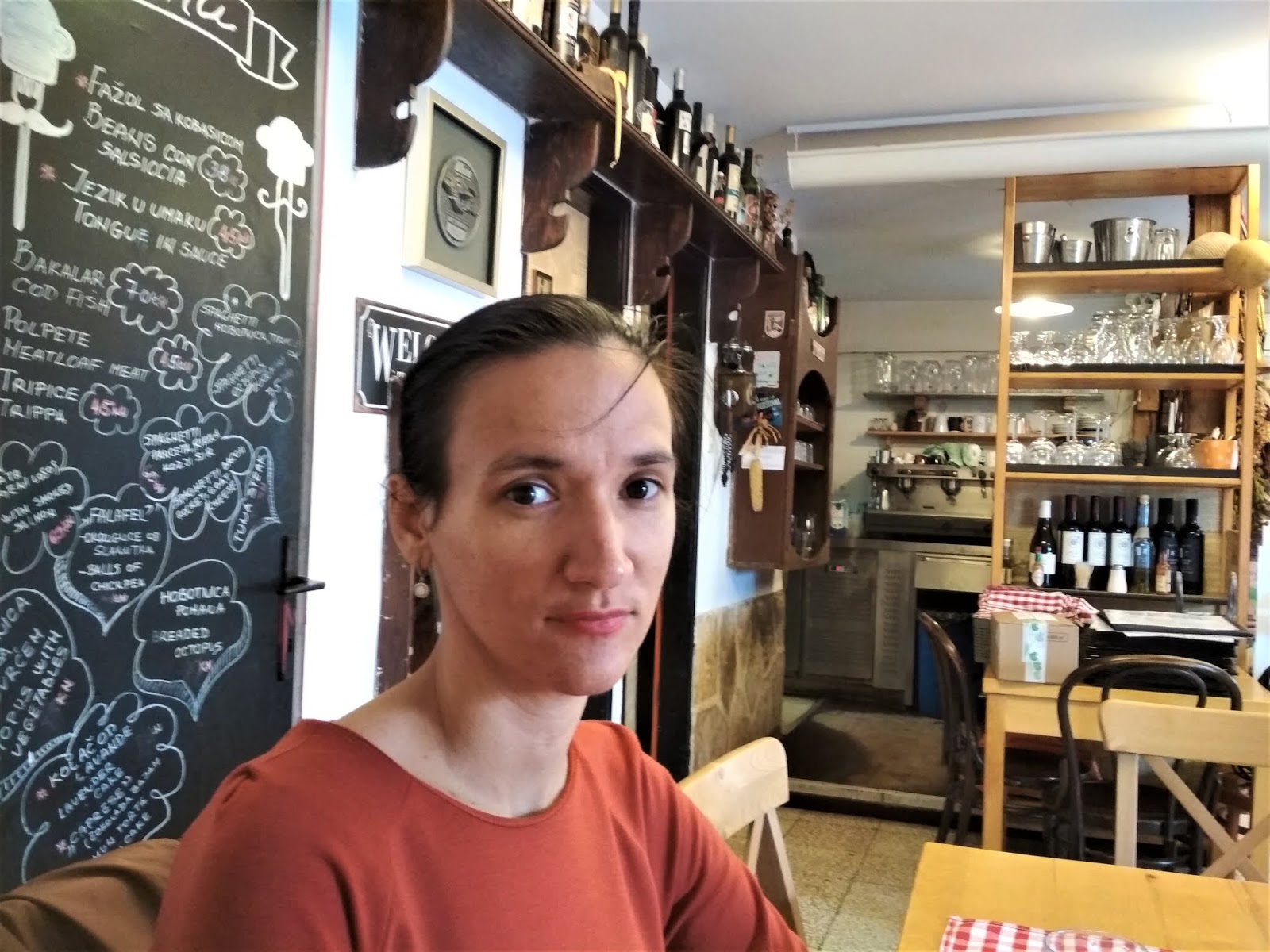 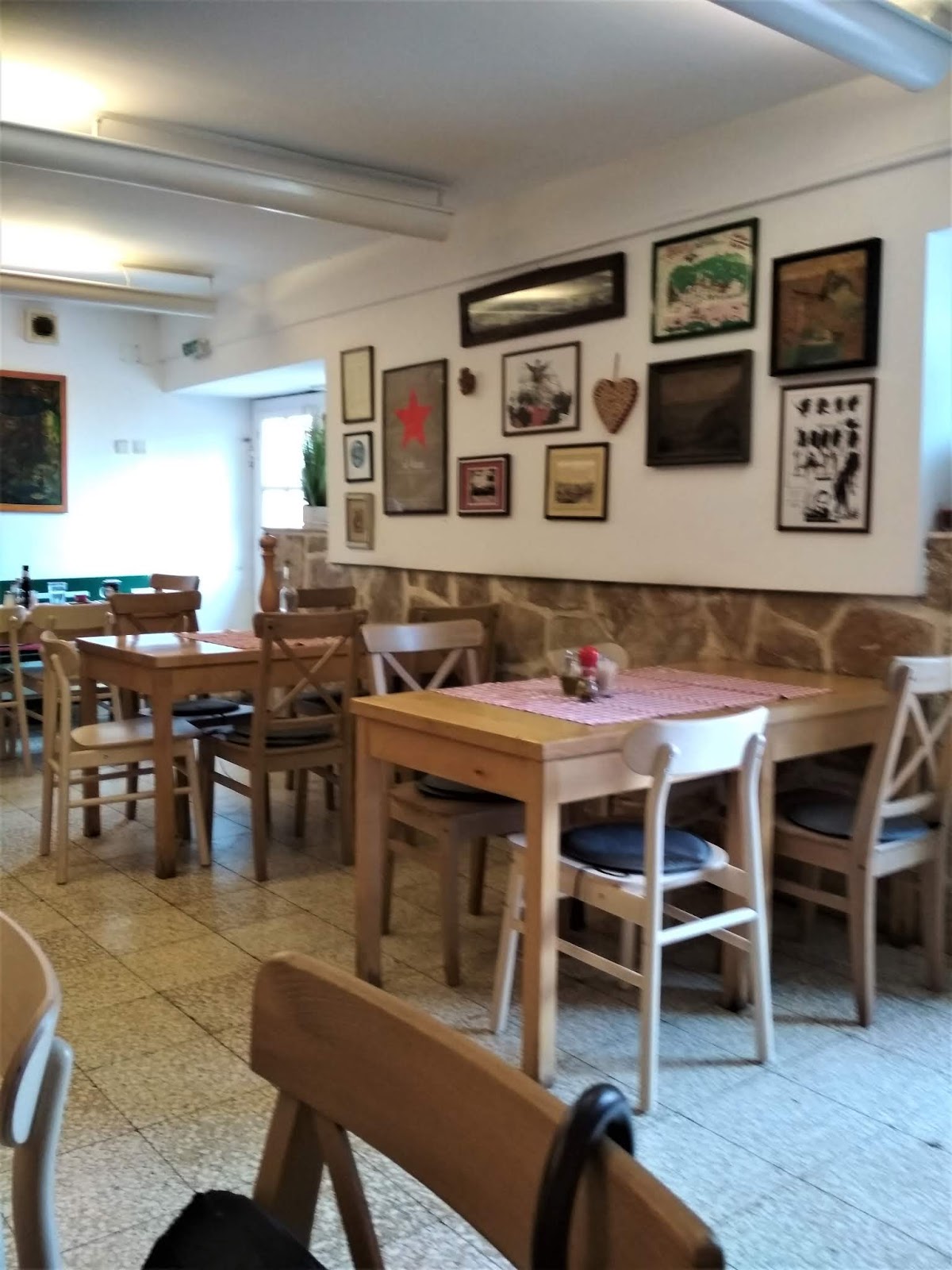 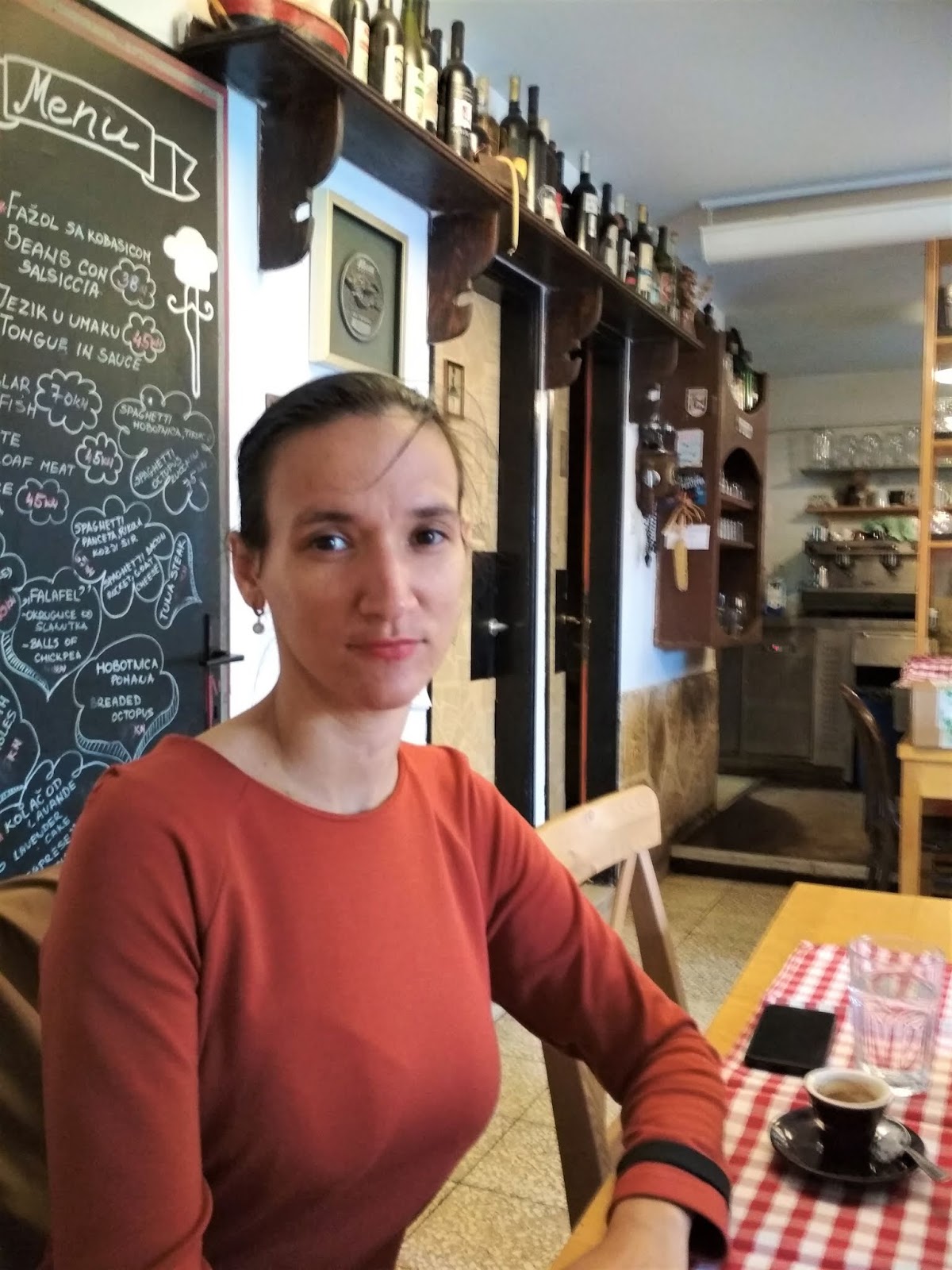 LET'S TALK ABOUT THE OUTFIT, SHALL WE?
I broke my 'no new purchases' period or better to say, my husband broke it for me when he bought me this beige coat. To be honest, I don't really like it. This shade of camel is a bad choice for my skin shade  and the cut of this coat feels clumsy. It is definitely not something I would pick up for myself, the kind of fast fashion purchase I try to avoid, but I'll probably wear it for sentimental reason (and to avoid being wasteful). Speaking about being less wasteful, the other items in my outfits are old so I'll link them up with my older posts to show you multiple ways to wear them.

HOW I WORE IT BEFORE?
This orange dress from Bellissima is quite versatile and very comfortable. I've had for a few years now. You can see how I styled this orange dress before with a faux fur coat (here), with a tartan blazer (here), with a white blazer and leopard heels (here)  and with a green vest (here).  The biker boots are one of the most worn shoes in my closet. You can see how I styled them before here, here, here , here , here and here. 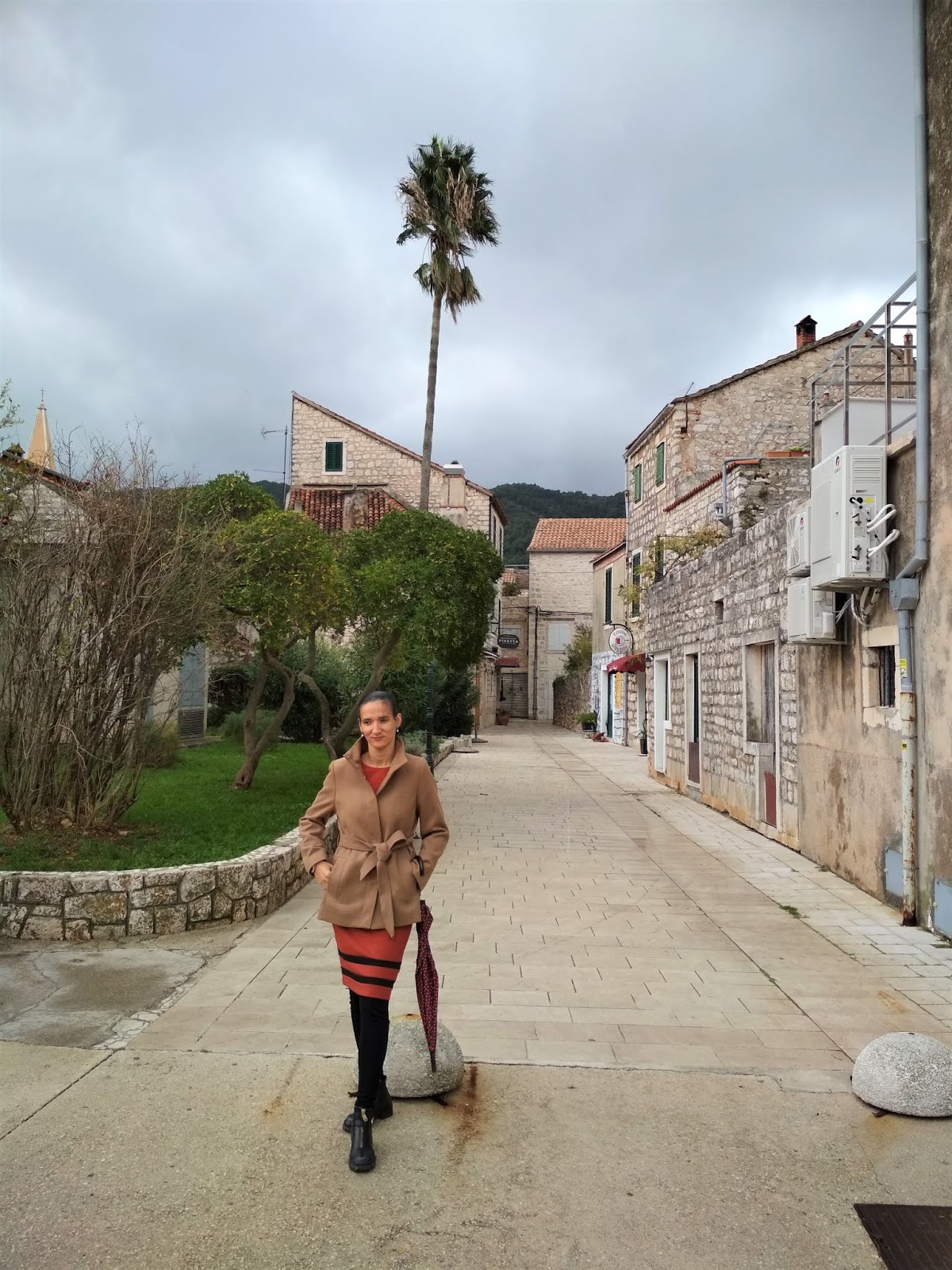 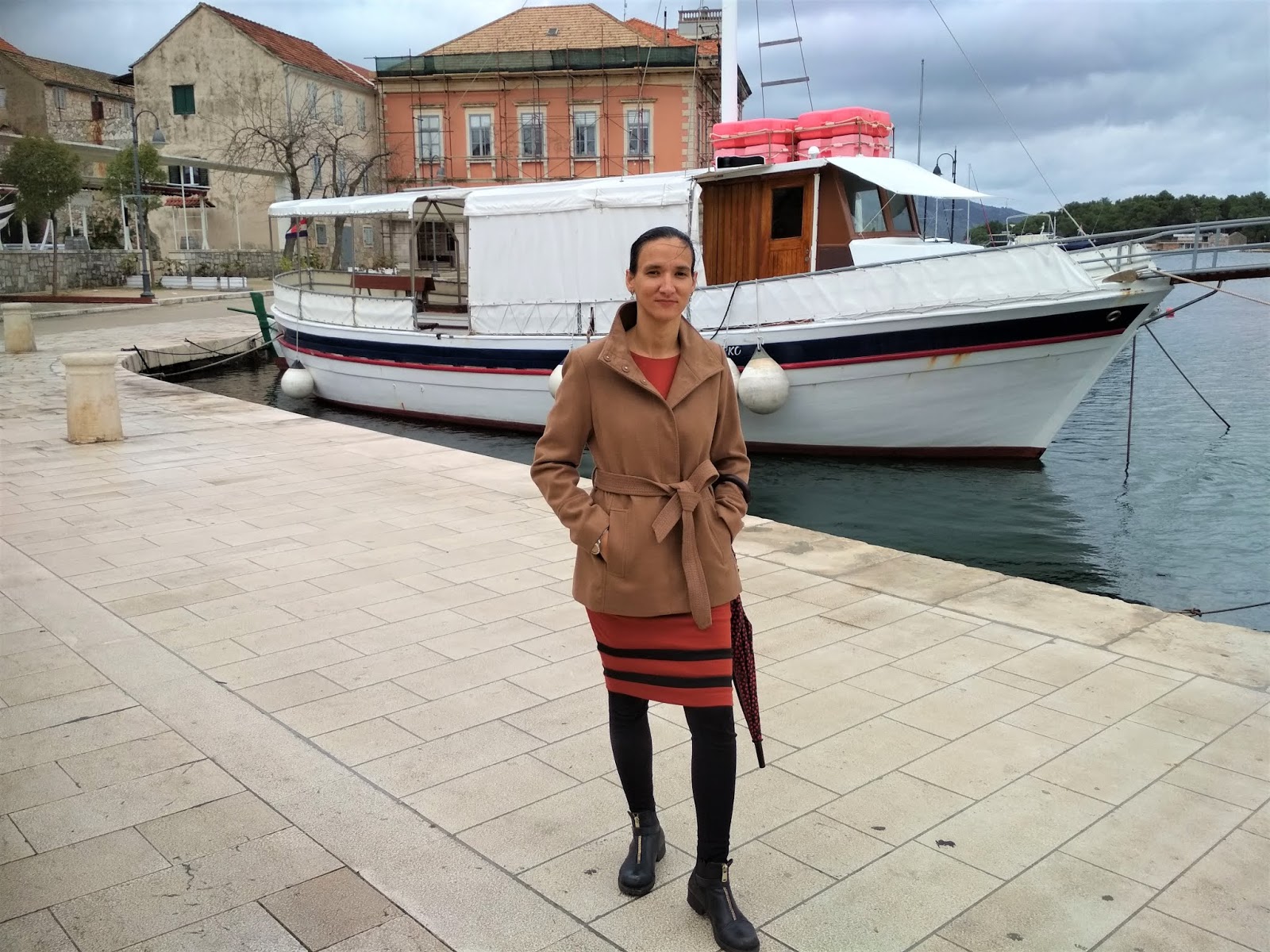 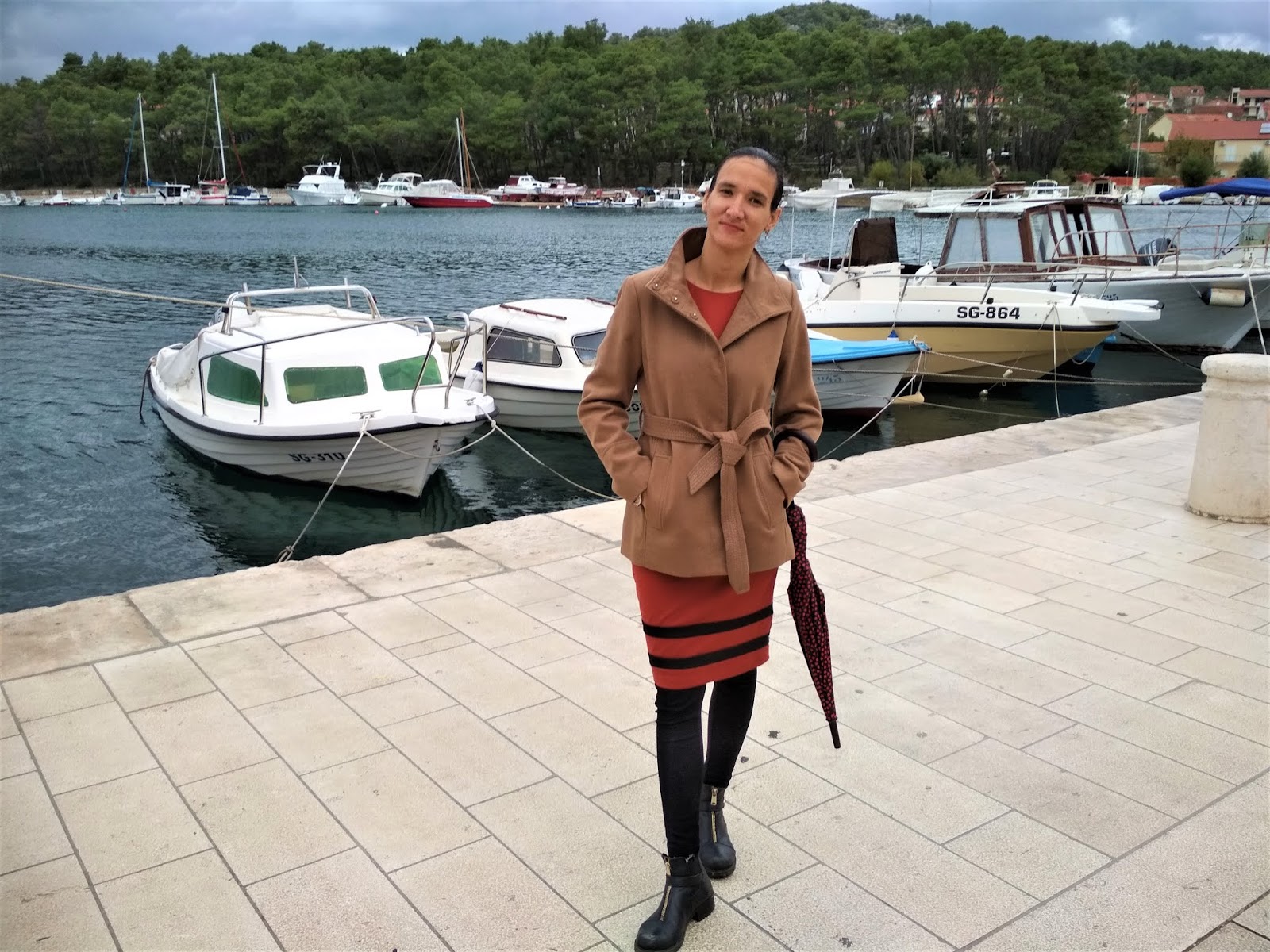 Let me know what you think about this look. Do you like wearing dresses? How do you typically style them? Do you wear biker boots? Do you find them comfortable? Do you own a shorter camel coat? If yes, how do you style it? Do you like my new umbrella? How is the weather where you're from?

How do you like Stari Grad city? Would you like to visit it? If yes, what time would you choose autumn and winter or spring and summer? I always enjoyed my summer visits to this place, but I think I like it even more in the colder ones. I'm already looking forward to visiting this place again. 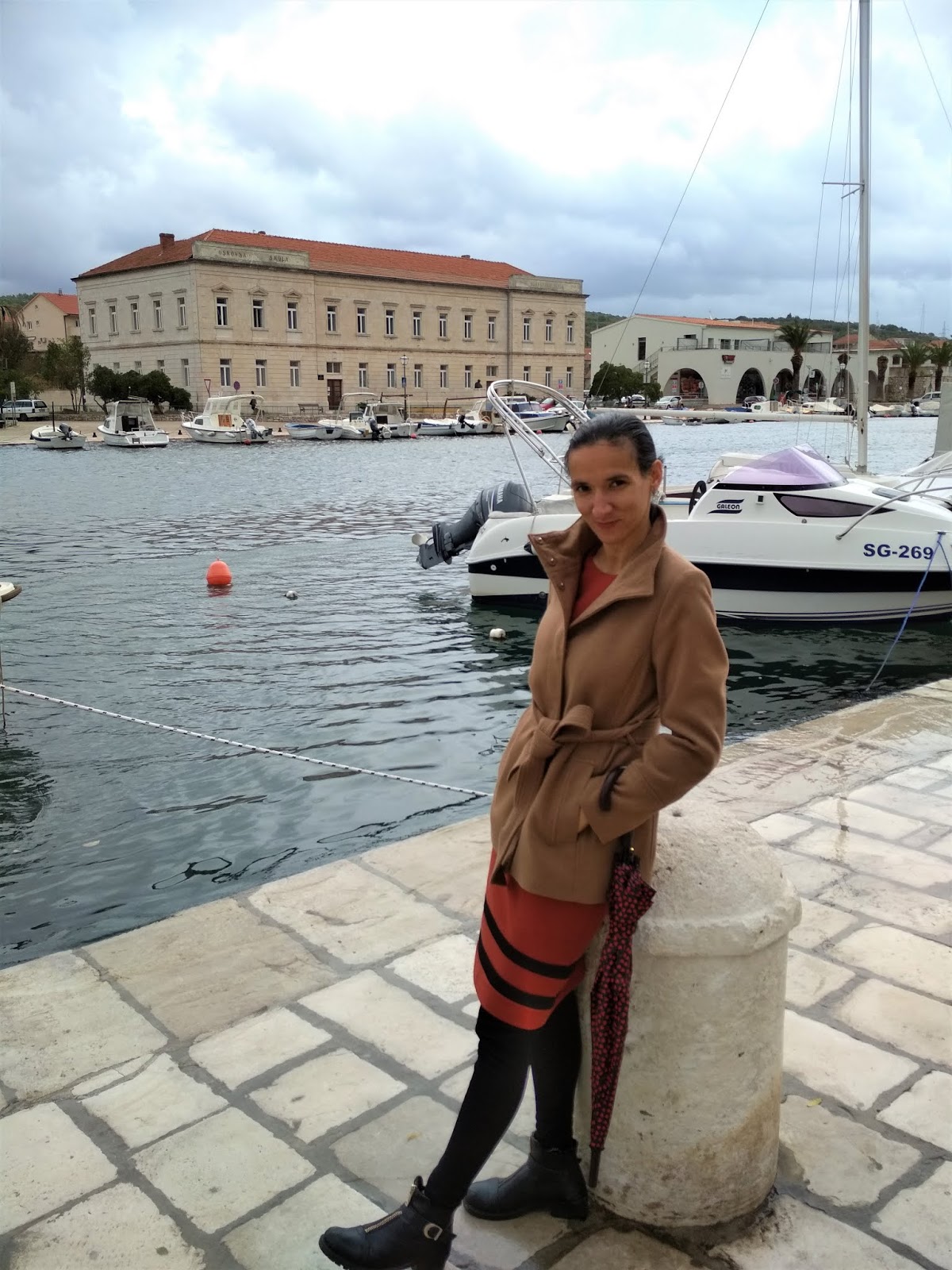 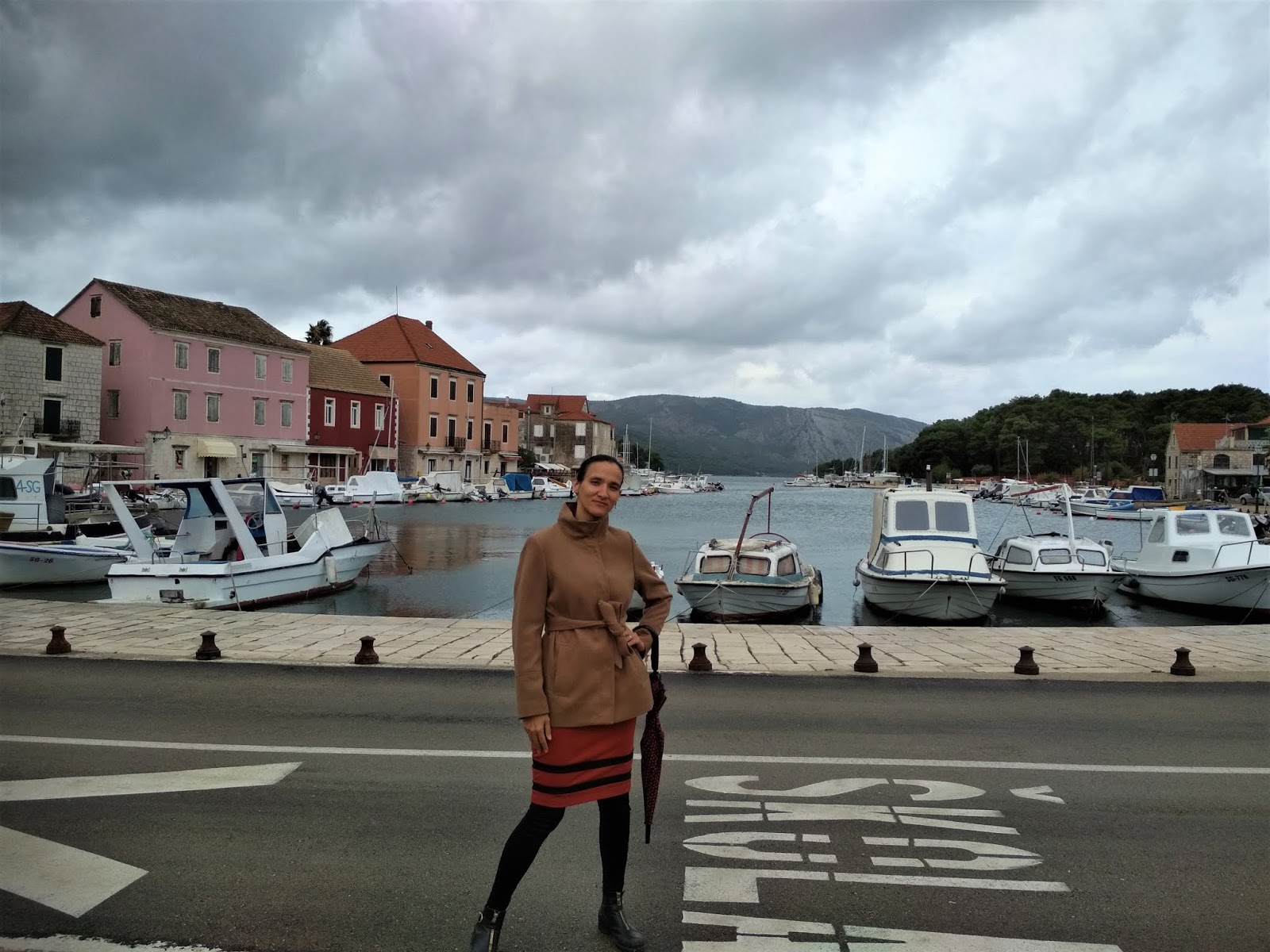 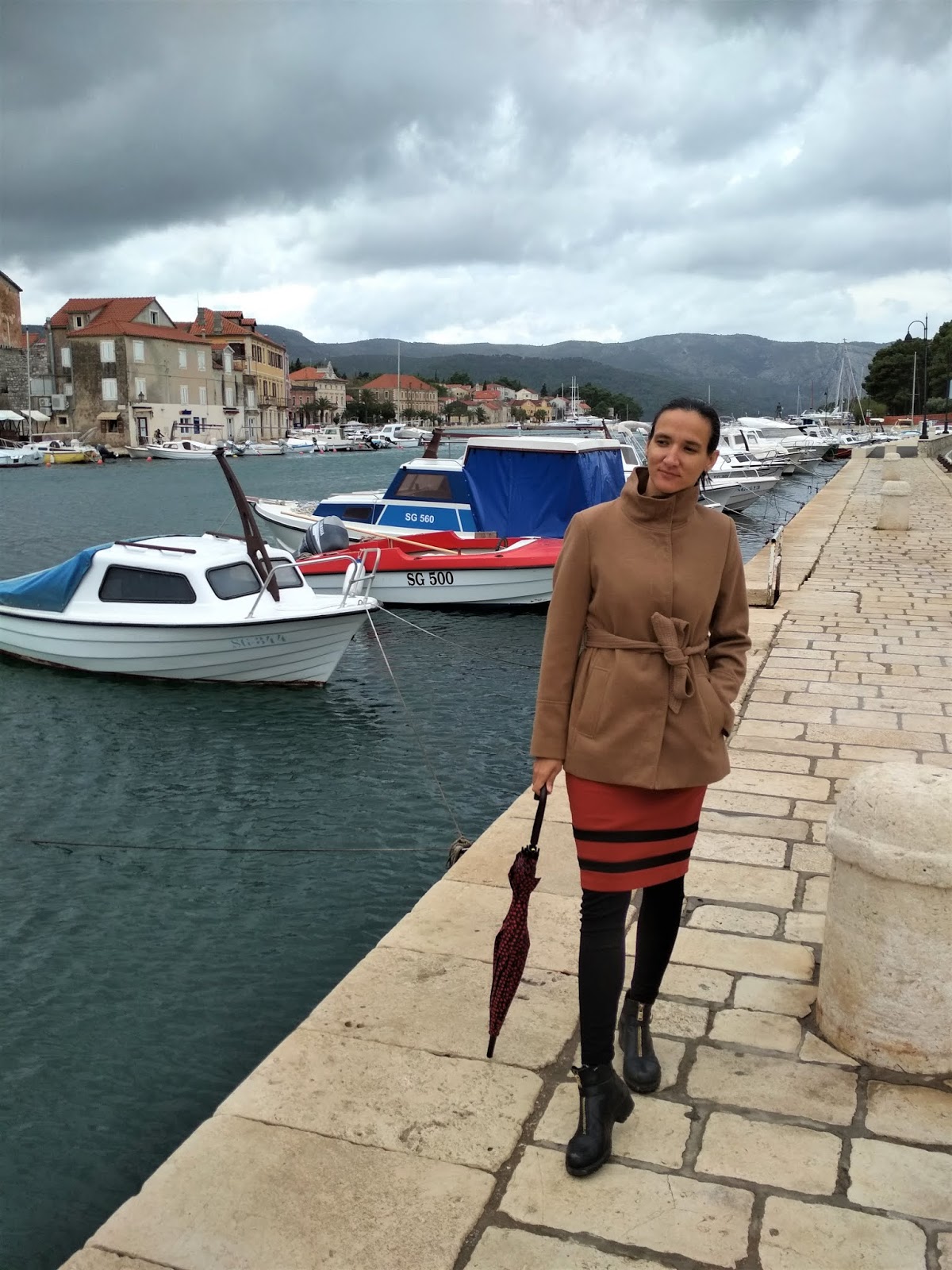 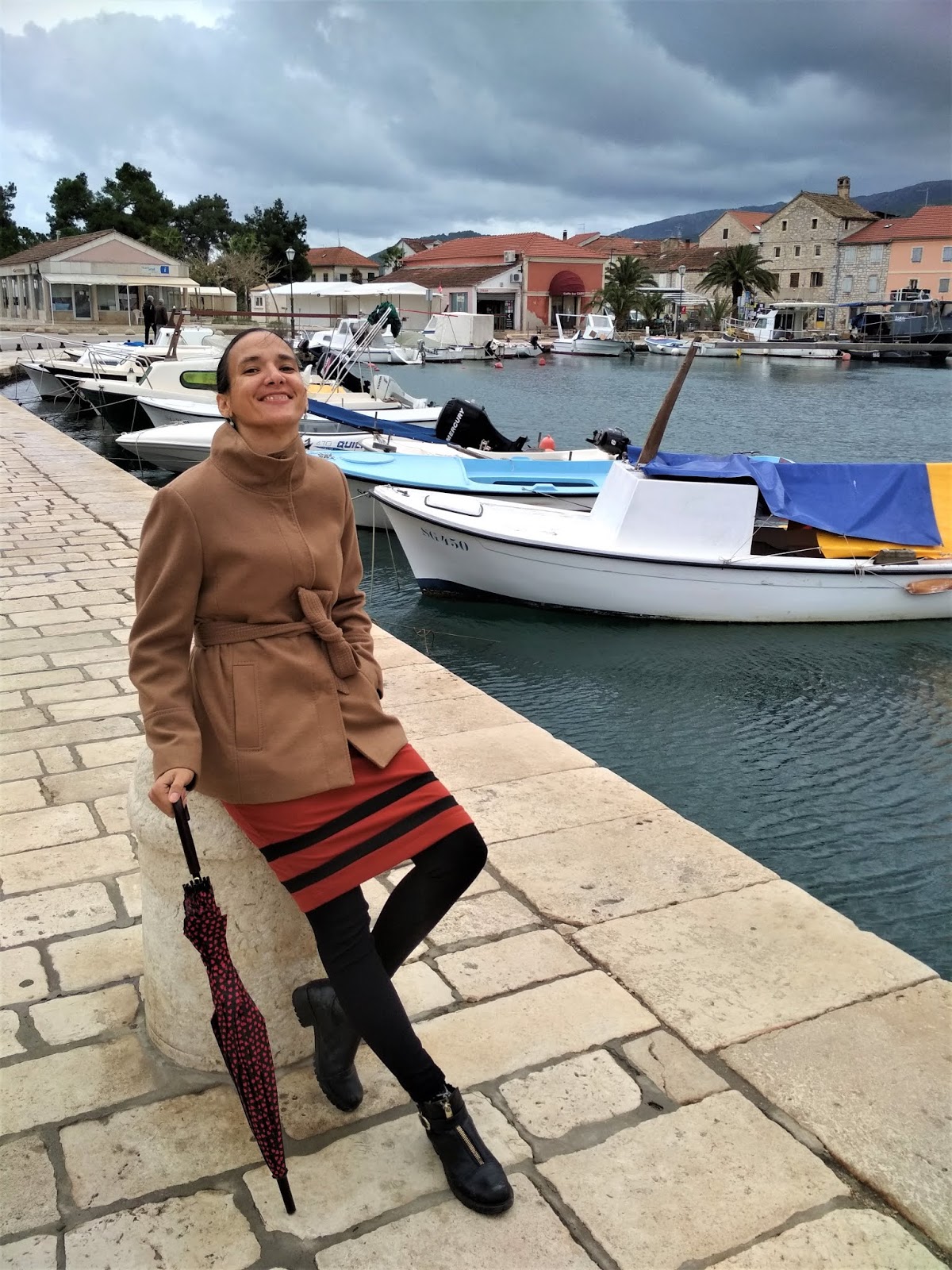 As always, thank you for reading and visiting!