BOOK REVIEW AND RECOMMENDATION: A RIVER SUTRA, A NOVEL BY GITA MEHTA 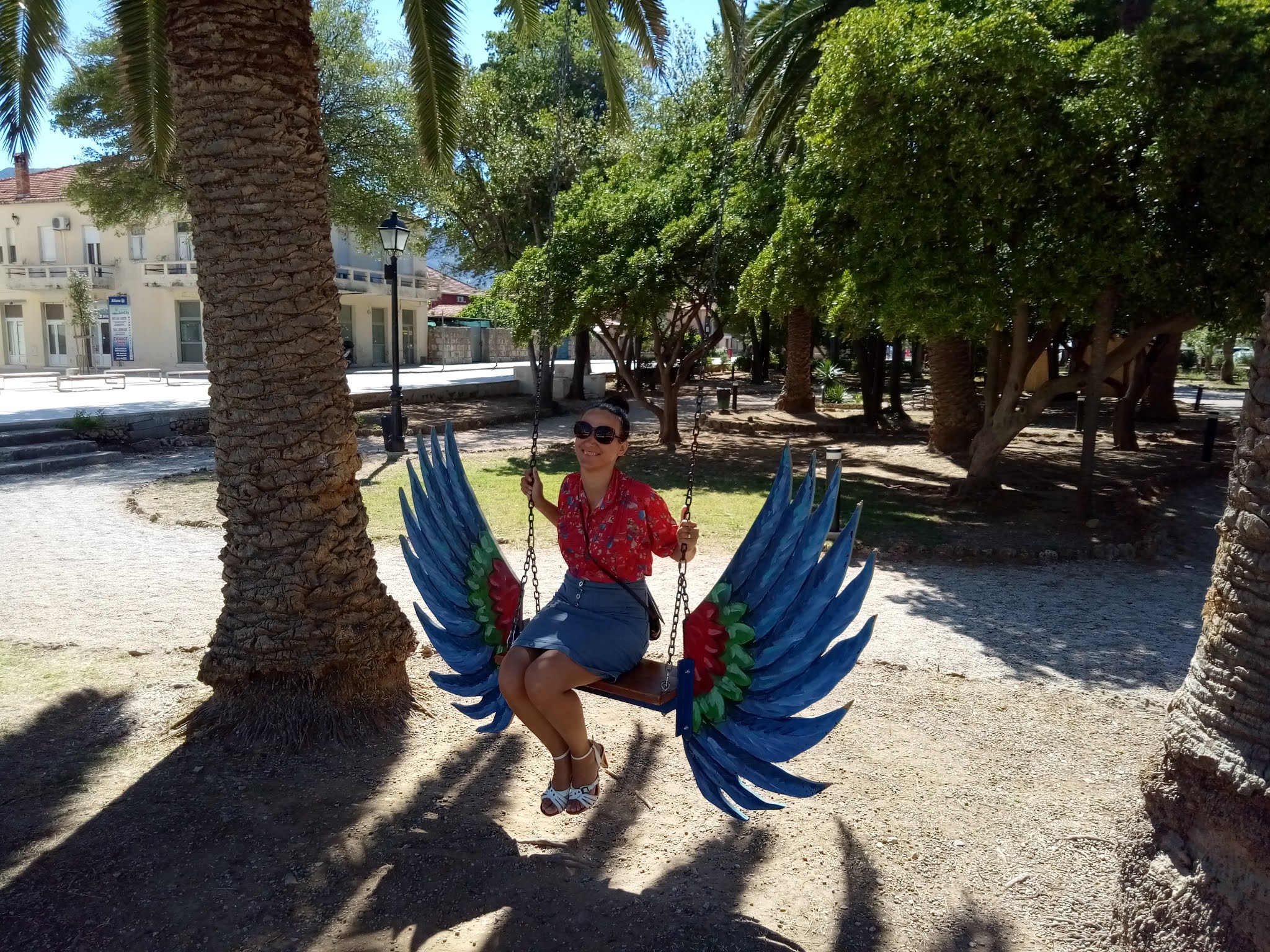 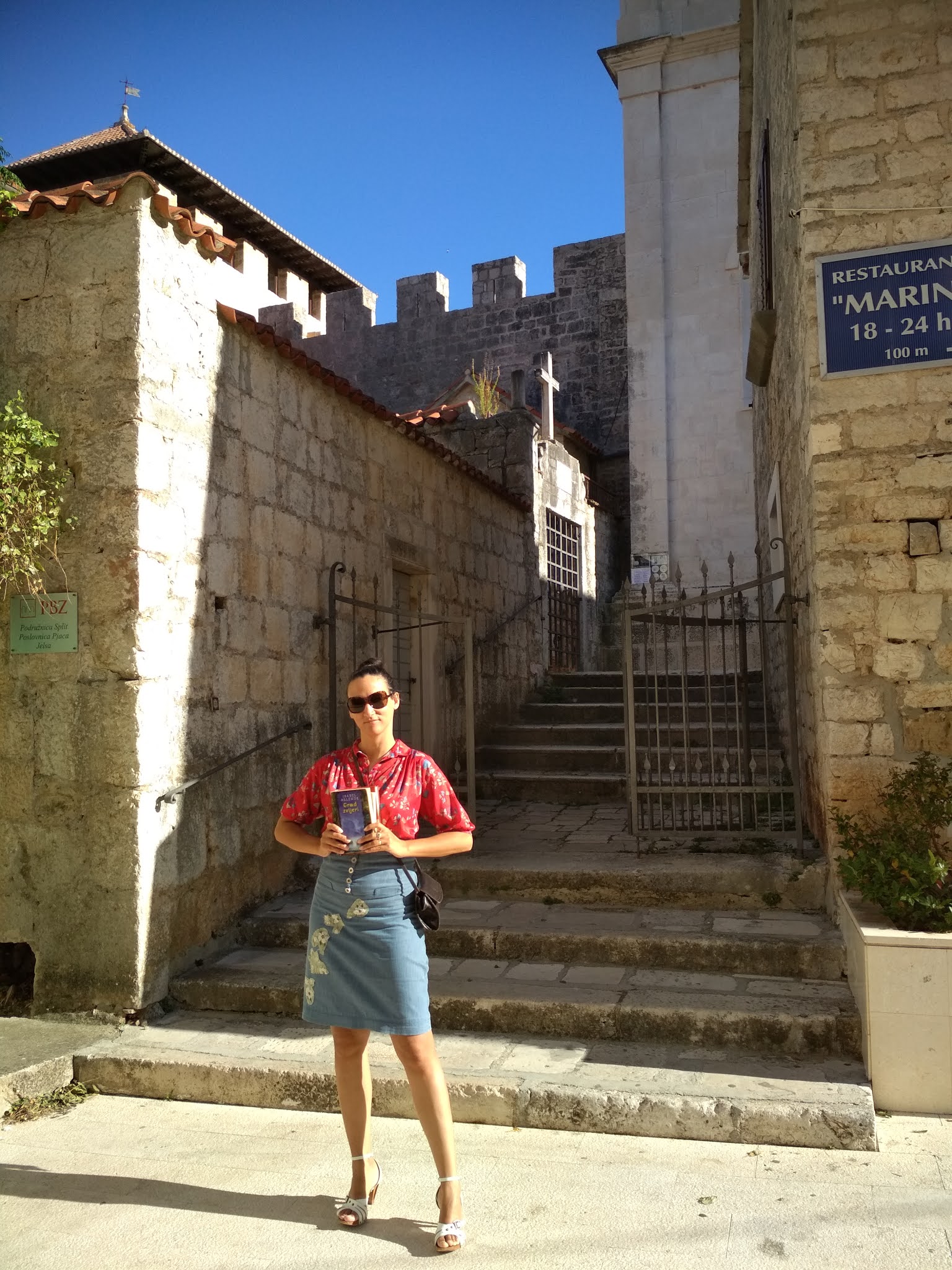 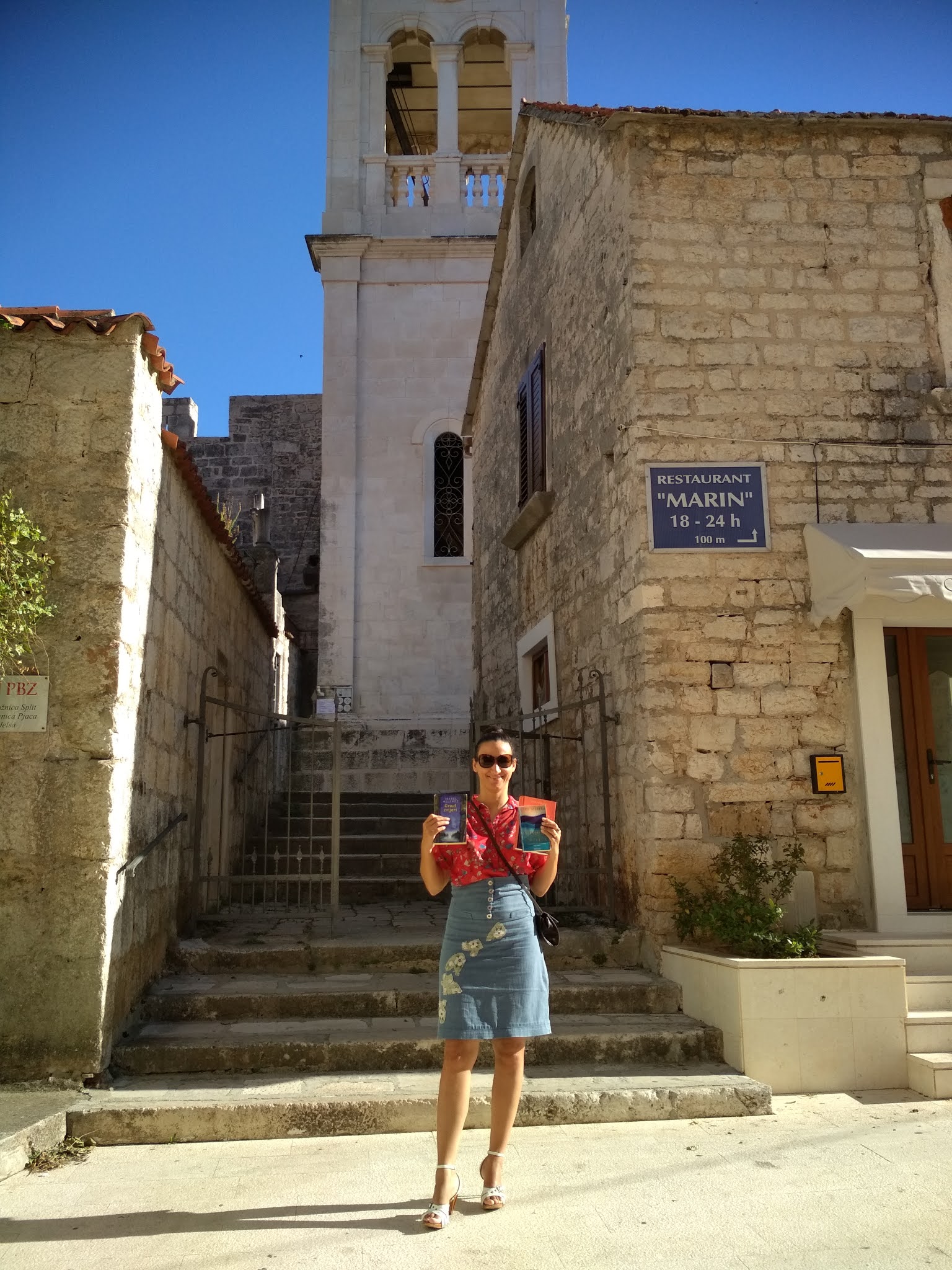 A RIVER SUTRA, A NOVEL BY GITA MEHTA
A River Sutra was published in 1993 in Toronto by Randon House of Canada.  The copy I have was published in 1944 by Mandarin Paperbacks. It has received much attention and is a critically acclaimed novel. Like many Anglo-Indian novels, it seems to be largely directed to the Western or in other words a foreign reader.  By that I mean that the novel itself often explains things about Indian culture that are probably obvious to an Indian reader. I'm not saying that it excludes any reader or implying that the fact that is written in English makes it less authentic. I cannot be the how authentic the novel is in describing India for I'm not Indian. I can only write about my reading experience and novel as such. 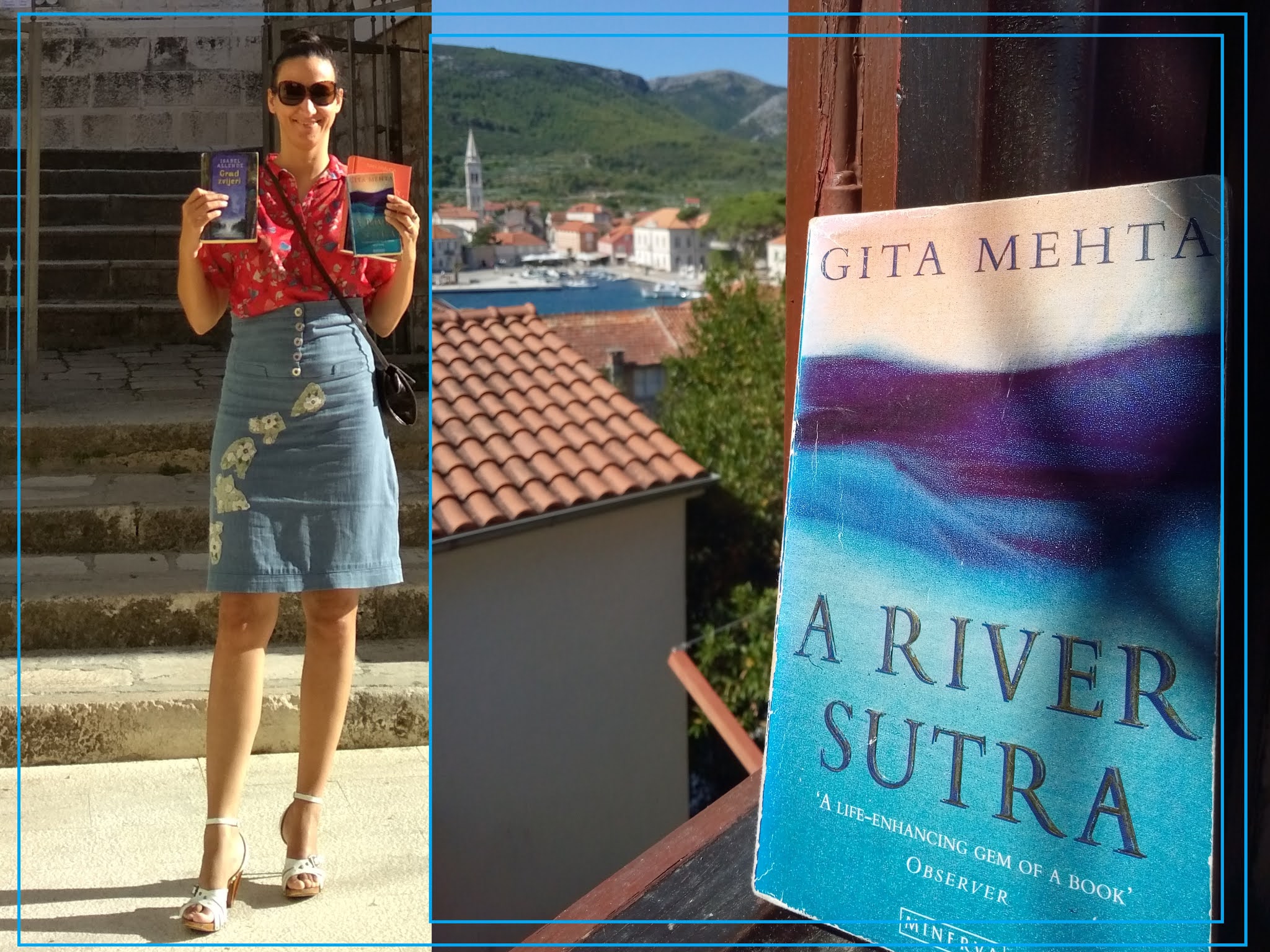 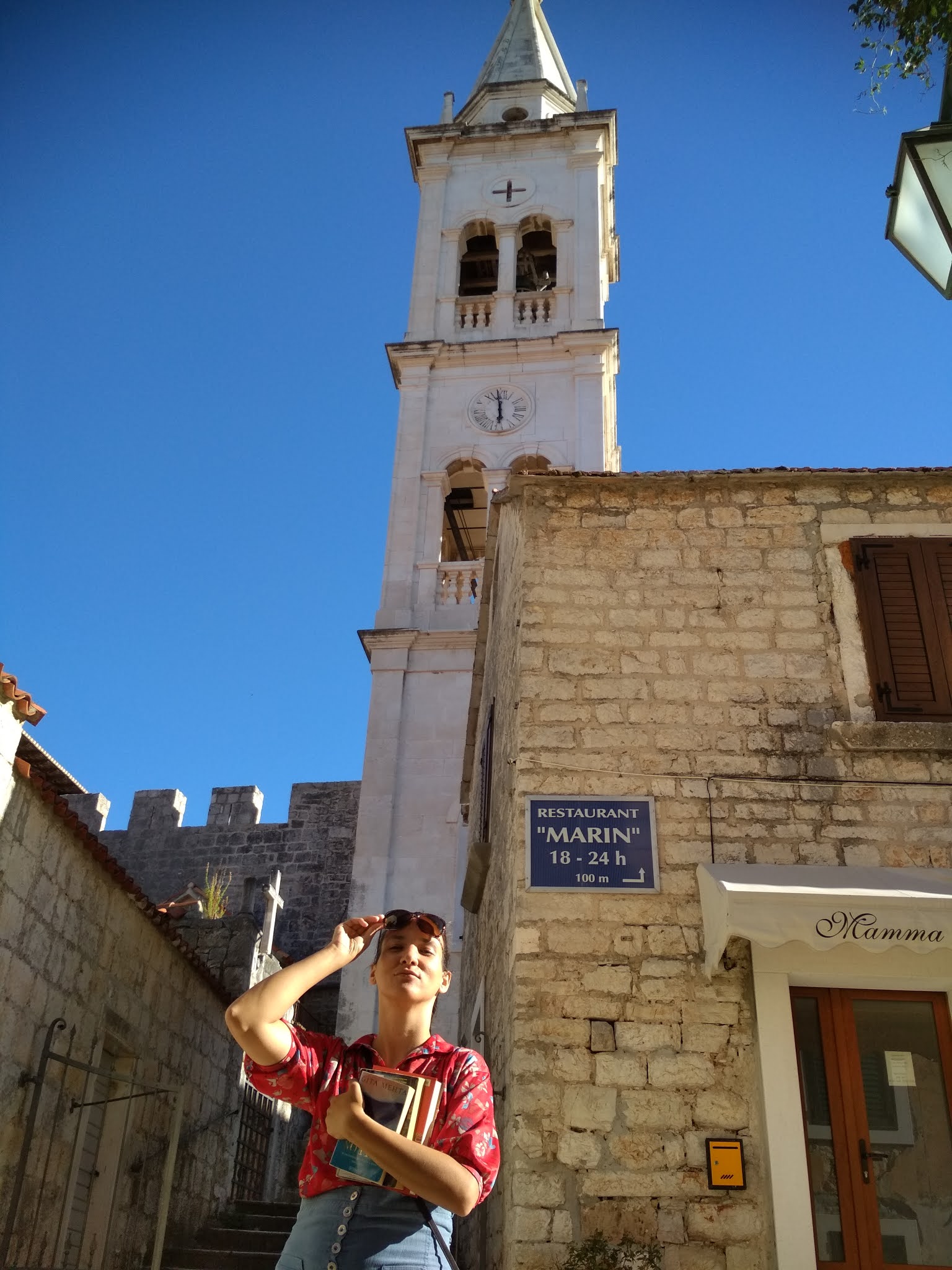 WRITING STYLE AND NARRATIVE USED IN A RIVER SUTRA BY GITA MEHTA
A River Sutra is written in mid to late twentieth century style, so it is true to its time period, one could say. This novel uses a framed narrative. The narrator of the novel is an aging burocreate who decides to leave the world and retire as an in keeper.  In some sense, the novel could also be called a collection of short stories. Almost every chapter in a novel is somebody's life story. All the characters in the novel including the protagonists are Indian. There are no foreign characters in the novel. The in keeper, that is the protagonist, comes in contact with both local people and travelers. The protagonist and the narrator of the novels listens to all of these stories, sometimes adding his own comments to them once they are done. However, the protagonists of these stories are narrators in their own right for it is them who tell their stories. I would say that Gita Mehta choose a good narrative technique as it enables the stories to come to life.  A framed narrative is quite suitable for this work of literature and works into this novels's advantage. This novel is often about people, as the novel's opening quote from Love Songs of Chandidas implies: "Listen, O brother, Man is the greatest truth. Nothing beyond. " 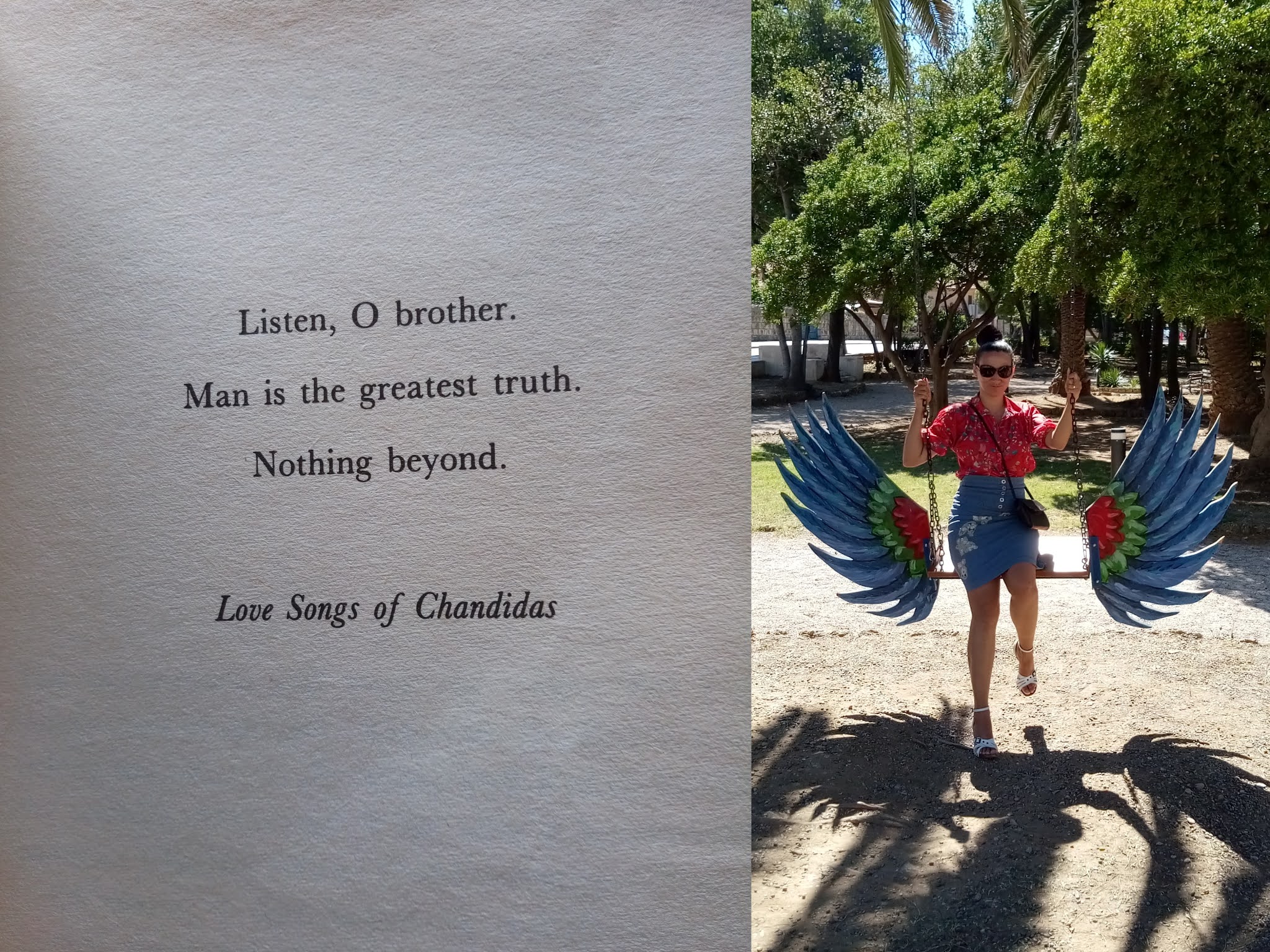 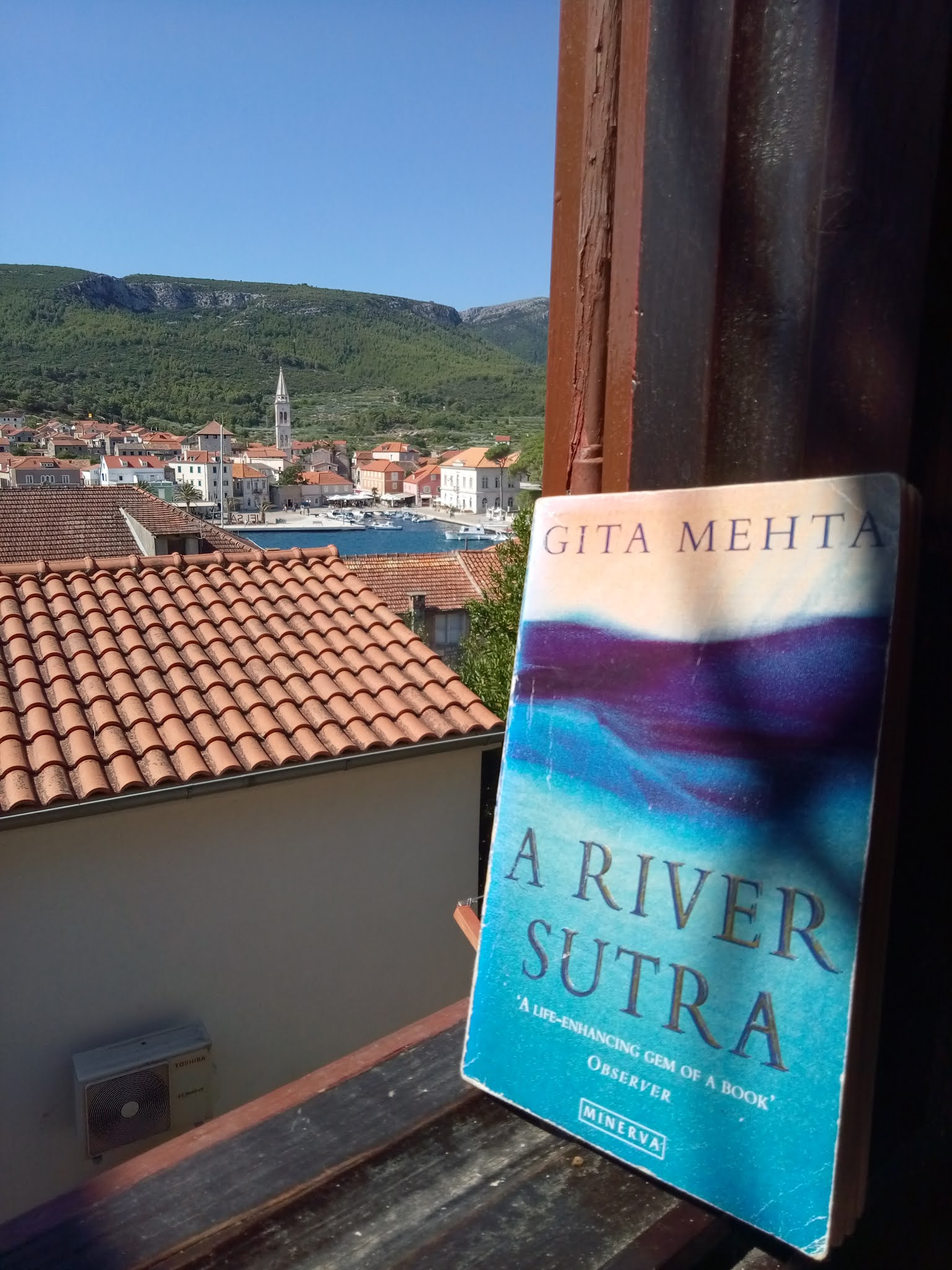 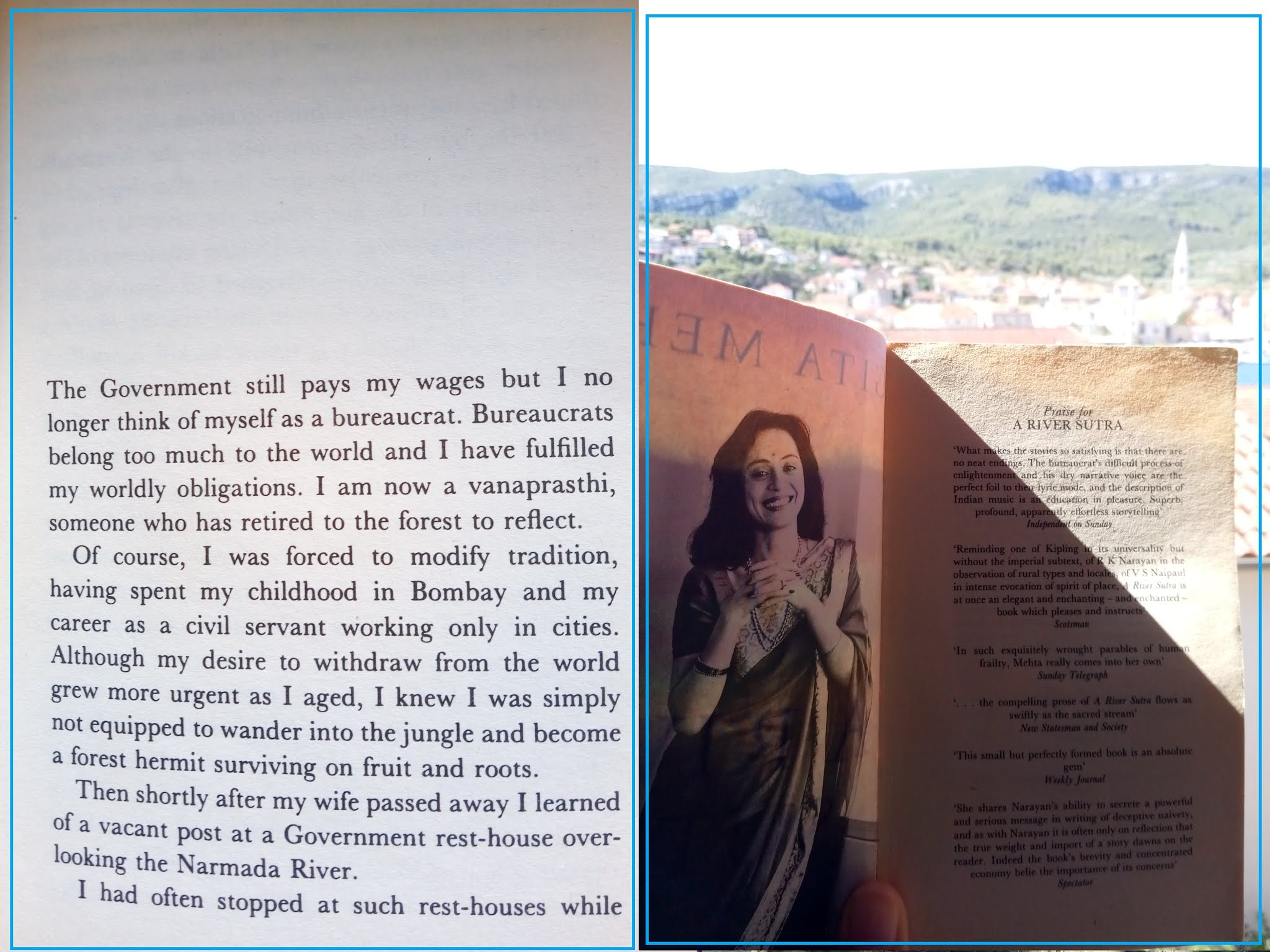 CHAPTER THREE- TARAQ MIA AND AN INTRODUCTION TO A NEW STORY
Chapter Three opens with following words: "For some time the memory of the monk disturbs me" (p. 40). Like the protagonist, I was somewhat disturbed by the monk's story but I also loved it. What is the only thing the monk has ever loved? Was it love itself, the human capacity for love? It is only when the monk stopped accusing his father and sympathizes with him, that he understood the true meaning of compassion. Chapter Three introduces another character, an elderly teacher Taraq Mia with whom the protagonist often plays chess. Besides impressing him with his simple love for the Lord showed in his singing prayers, Taraq Mia also serves as a narrator for another story. This is the pattern that the novels follows. Many chapters are stories in their own right while other chapters are reflection on those stories. Most stories are told directly but sometimes there is another character who tells these stories, so we get a story within a story.
WHAT KIND OF NOVEL IS A RIVER SUTRA?
How to describe this novel? What it is about? I described the opening paragraphs, the protagonist, the first few chapters, the writing style and so on. I analysed one of the stories in this novel in more detail and - but what is this novel really about?  I would say that is about life itself, about life, love and suffering.
The majestic river Narmada serves as a connector to all these stories. Its 'immortality' is often referenced. This is a novel about India, the modern and the old country of mystery. The author connects the ancient Indian mythologies, religions and teachings with the present beautifully. What a beautiful novel this is. It could also be described as a collection of stories for it,as I already stressed, features many different stories. The central characters is a man who has left his important job and in some sense retired. He is without a family and wants to renounce the world. However, he keeps meeting different people who tell him his life stories and this makes him realize that leaving the world may not be as easy at it seems. What it means to denounce the world? As he hears the stories of a mystic, a monk, a music teacher, a courtesans and a government official, our protagonists learns a lot but is left with perhaps even more questions than ever. As a reader I was left with many questions as well and I loved it. I actually like how this novel doesn't give you any definite answers but rather encourages you to find your own answers. MY READING EXPERIENCE- HOW LONG IT TOOK ME TO READ THIS BOOK?It didn't take me long to read this book, about two hours in total. I was immediately drawn into it. I set to read this book during a ferry ride and despite being distracted by a horrid group of drunken tourists I managed to finish it within two hours. It really says something about how wonderful this book is for that group of young men was insufferable. When one watches TV, you see this type of men, the loud MTV style jackass idiots, but I always assumed that those kind of people are not real. Tourism made me realize that such specimens of humans not only exists but seem to be prevalent among young in Western societies. I escaped the saloon in an effort to get from that pathetic sight, but some of them went out as well and continued being obnoxiously loud. However, this novel was so engaging and well written that it made it easier for me to ignore the outside noise. Now, that I think of it, perhaps my reading experience was appropriate and had a lesson to teach in itself. Often in my life, I have chosen to distance myself in an effort to keep a piece of mind and now I wonder has it left me a colder person. I wonder if I have lost some of my sympathy along the way. I'm an emphatic person but I don't think it's the same as sympathy and love. This novel gave me a lot of food for the thought.
CONCLUSION- A RIVER SUTRA IS AN ABSOLUTE GEM OF A BOOK
This was my first novel by Gita Mehta, but I doubt it will be the least. This is a gem of a book. I do recommend it to everyone but especially to lovers of mythology and India. 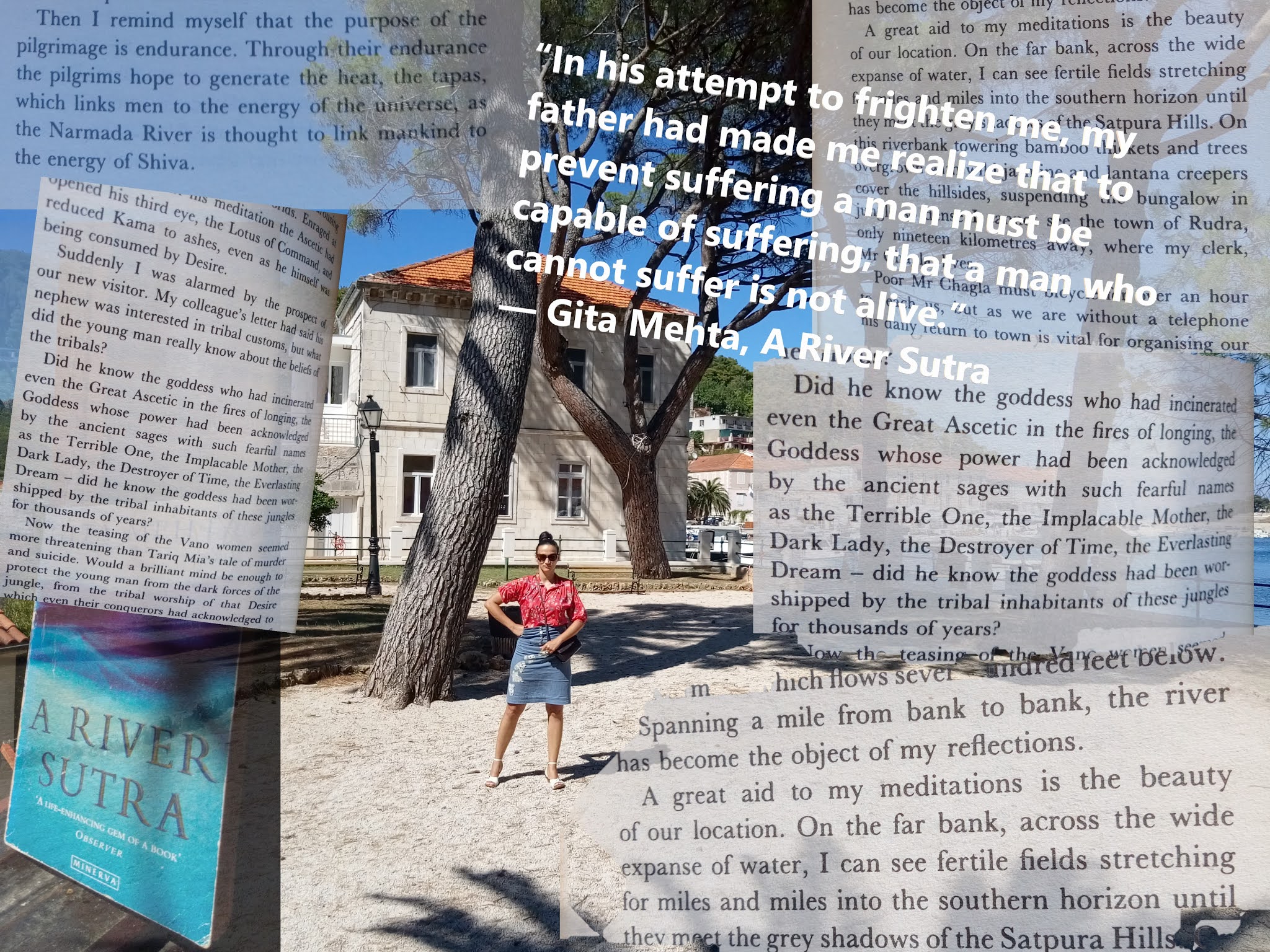 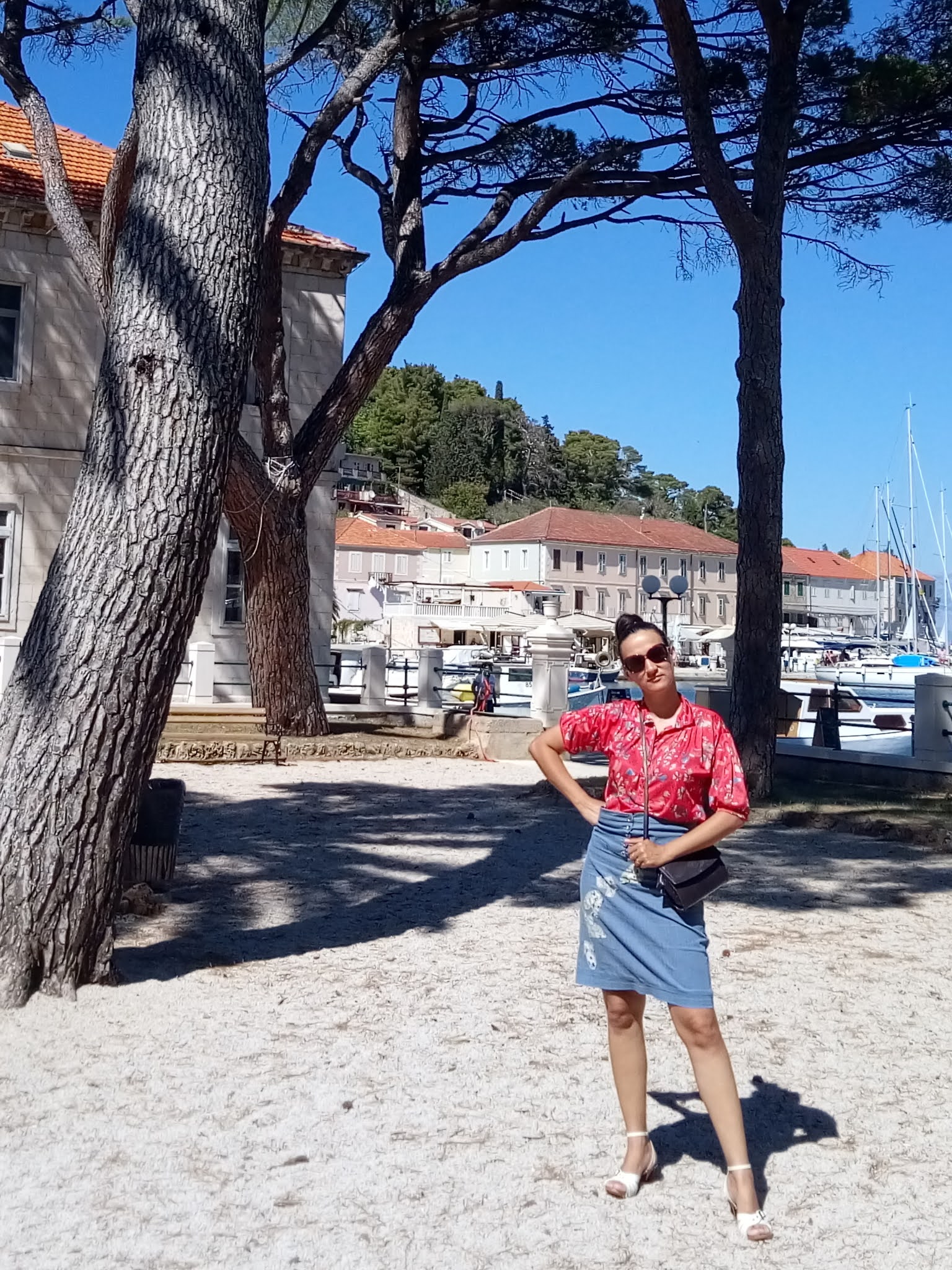 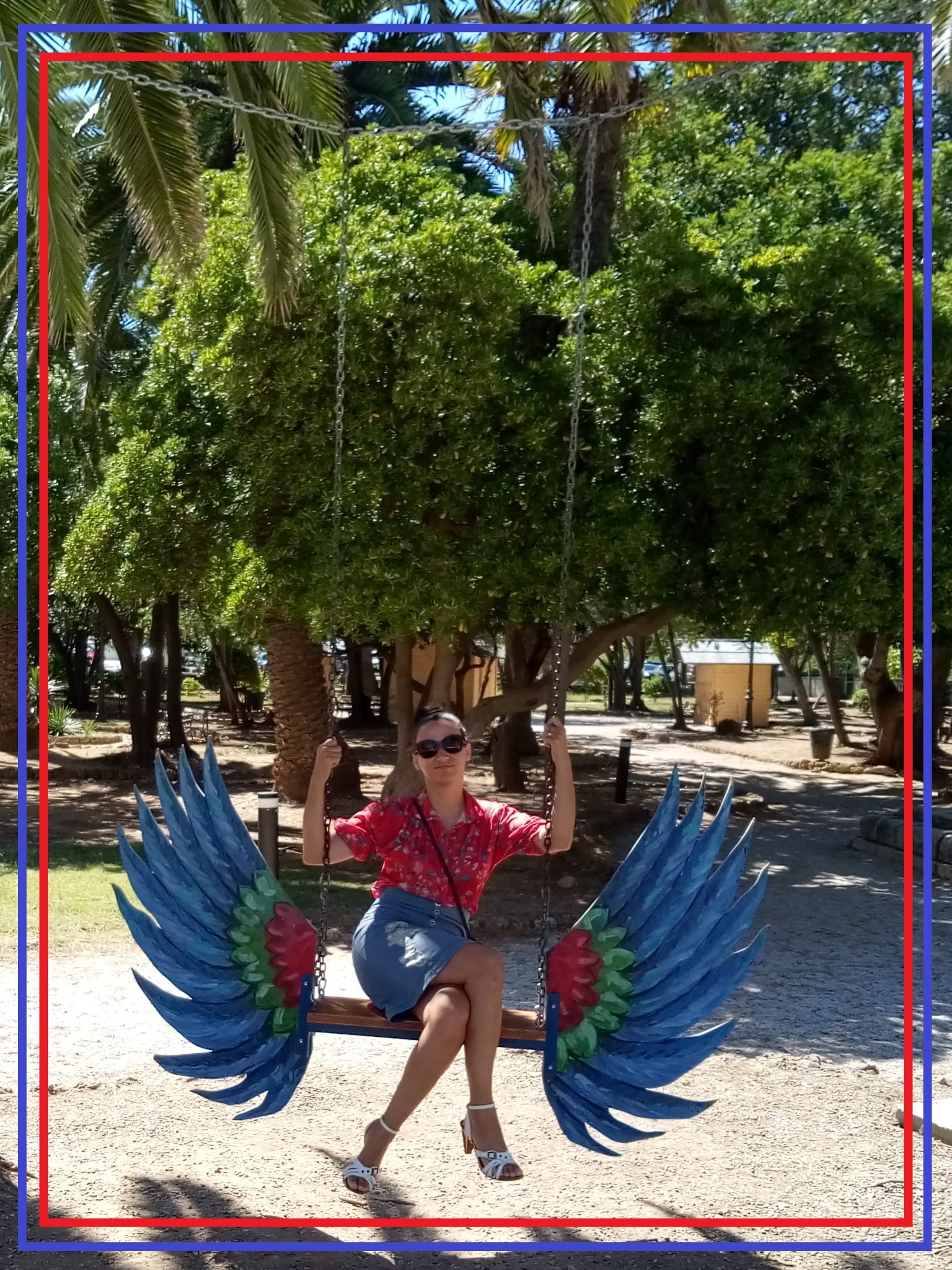 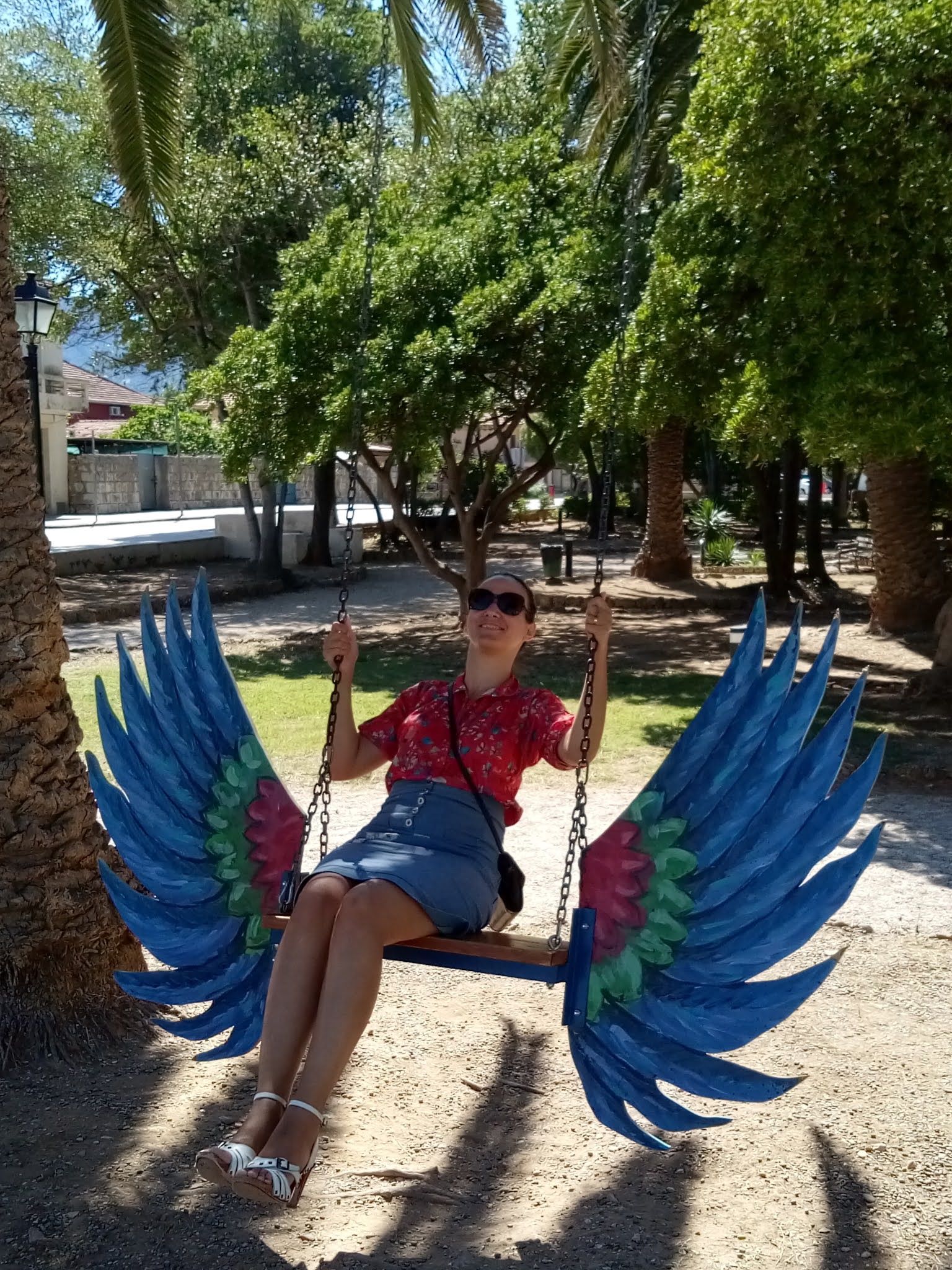 Isn't it fun how I found a swing that matches my outfit? As always thank you for reading and listening. Have a nice day!