Hello there! This post is going to be super short because I'm feeling depressed and tired, probably because of all the art projects I'm currently working on. I'm probably spending too much time drawing these days for I cannot see another reason why my energy levels are so low. Anyhow, today I'll just show you a couple of illustration I did (in different versions). So, let's start the one I'm most satisfied with. Bellow you can see how I illustrated a girl sitting on her balcony in an urban setting. After I finished the original illustration, I painted it digitally in Paint 3D in two main ways: one was colouring and working with the original colours and the other was by turning it black and white and then colouring it from the beginning. I ended up with five or six different version and I really cannot pick a favourite, they are all interesting in their own way. I also love that this illustration just came straight out of my head, without any planning or thought.  I just started drawing a cute outfit consisting out of a furry dress and high heeled boots and somehow all the other stuff just appeared on paper as well. I like how this 'Girl in the City' illustration is melancholic but also kind of optimistic at the same time, especially with added light effects. We need a bit of optimism now. Scroll down to see and read more.

A CHRISTMAS IN THE CITY: A GIRL SITTING ON HER BALCONY 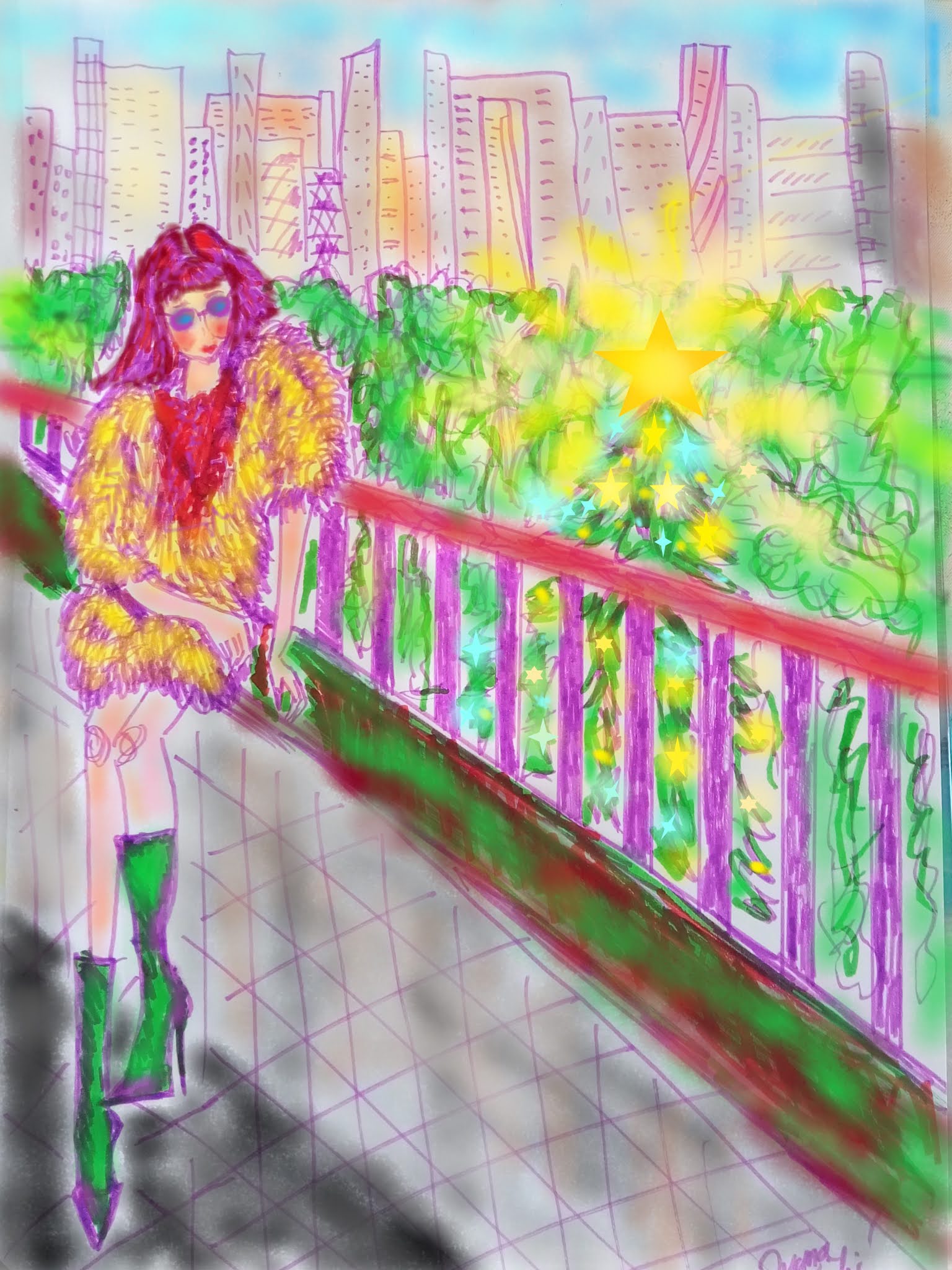 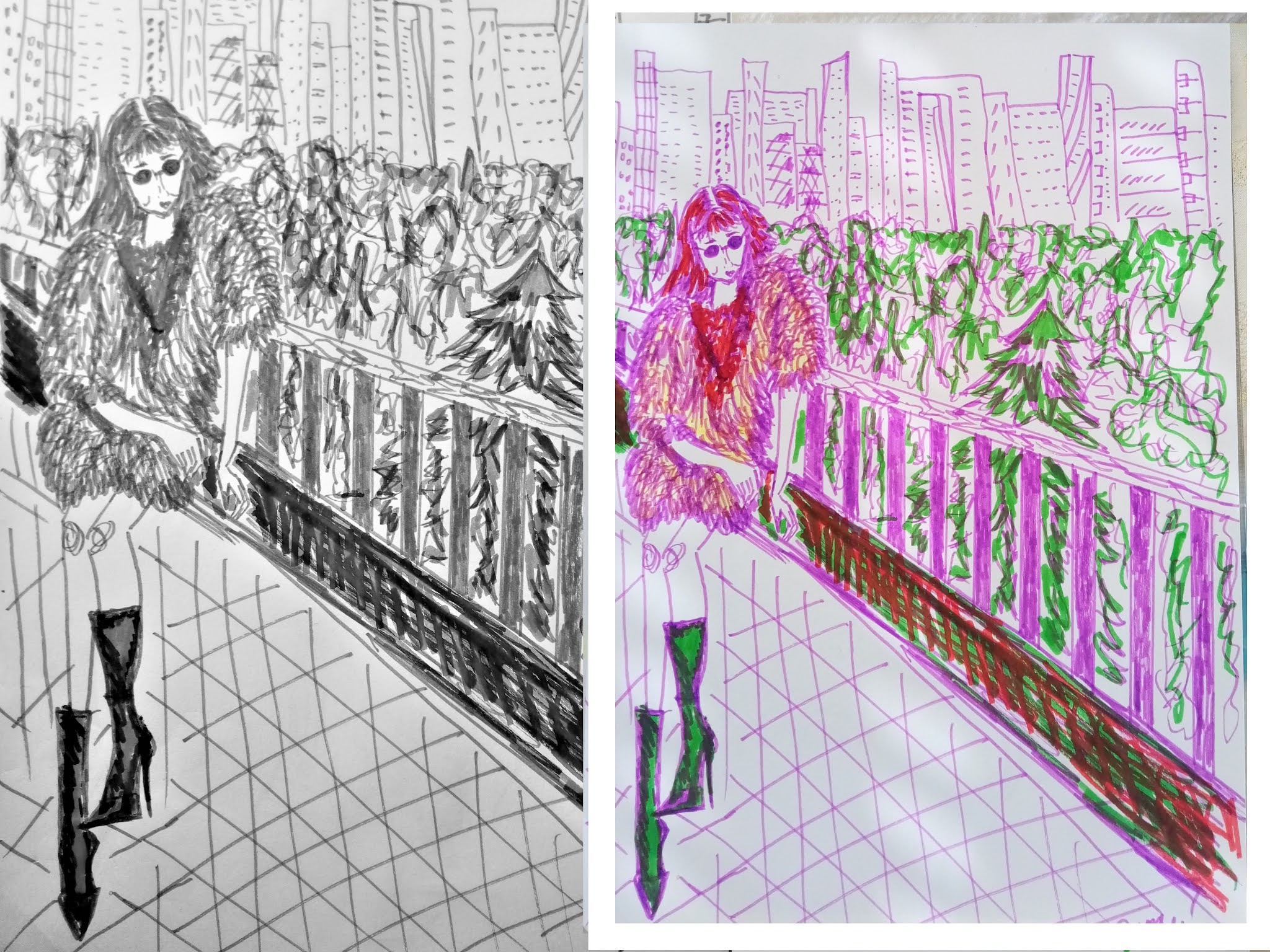 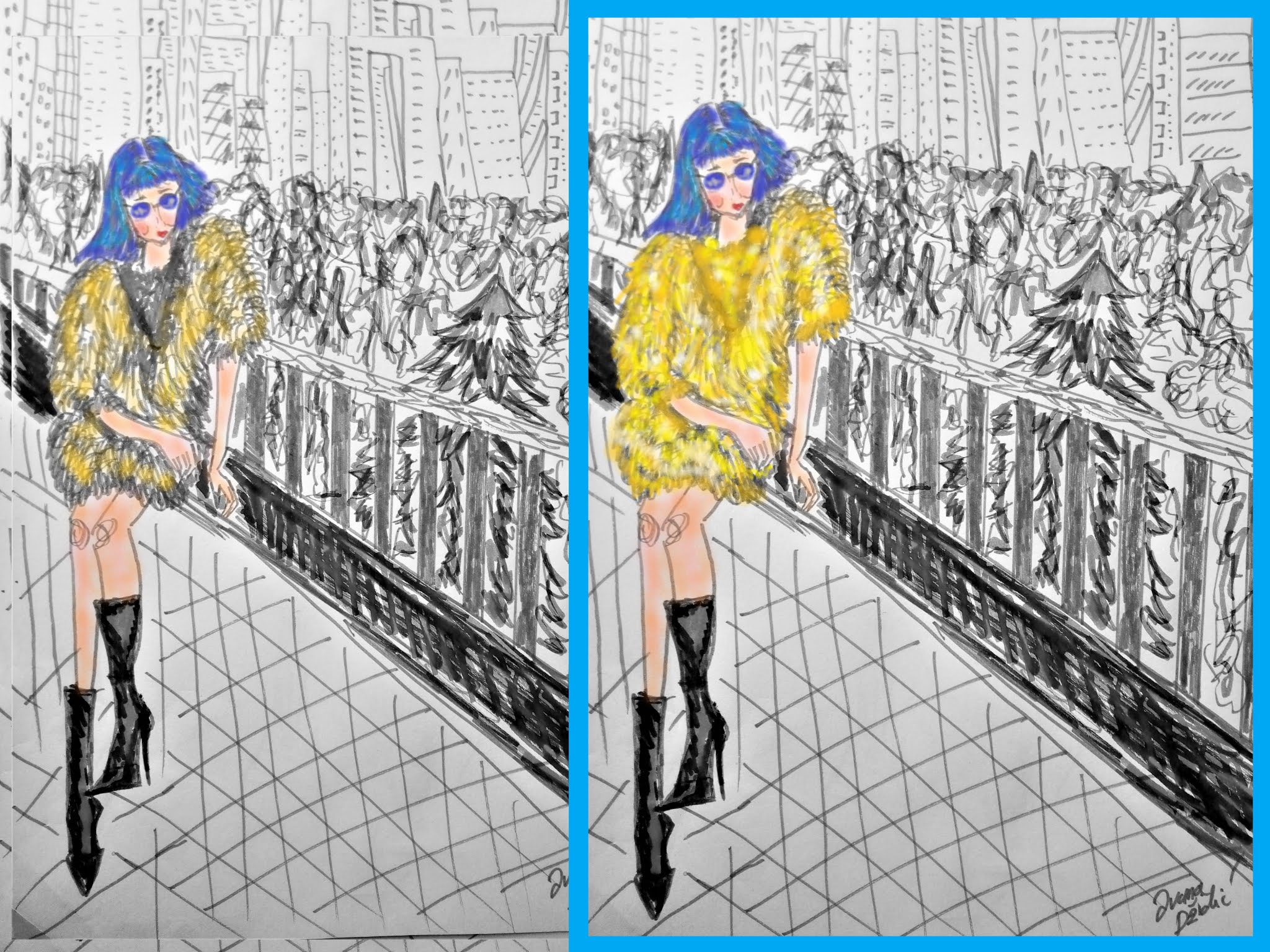 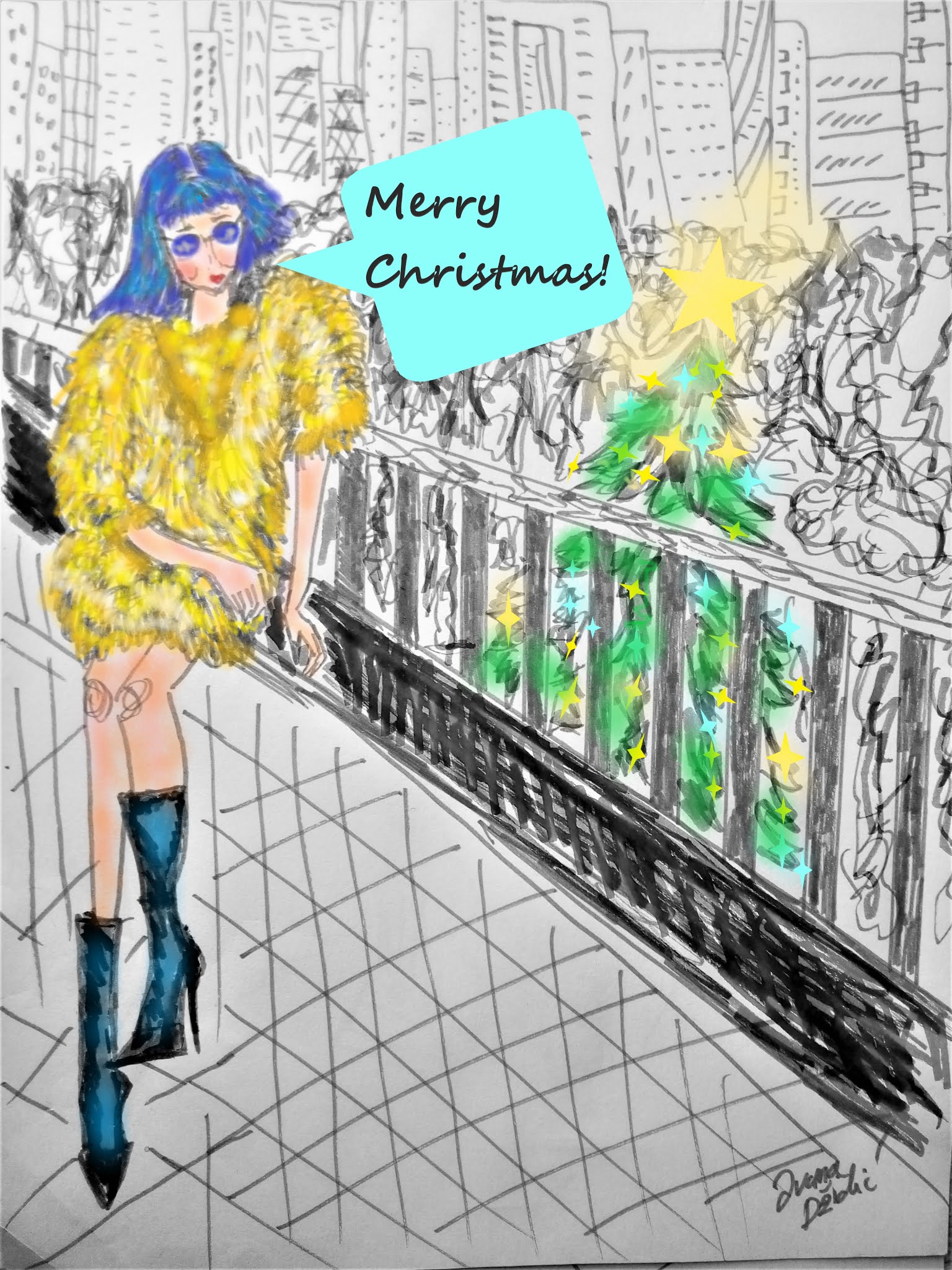 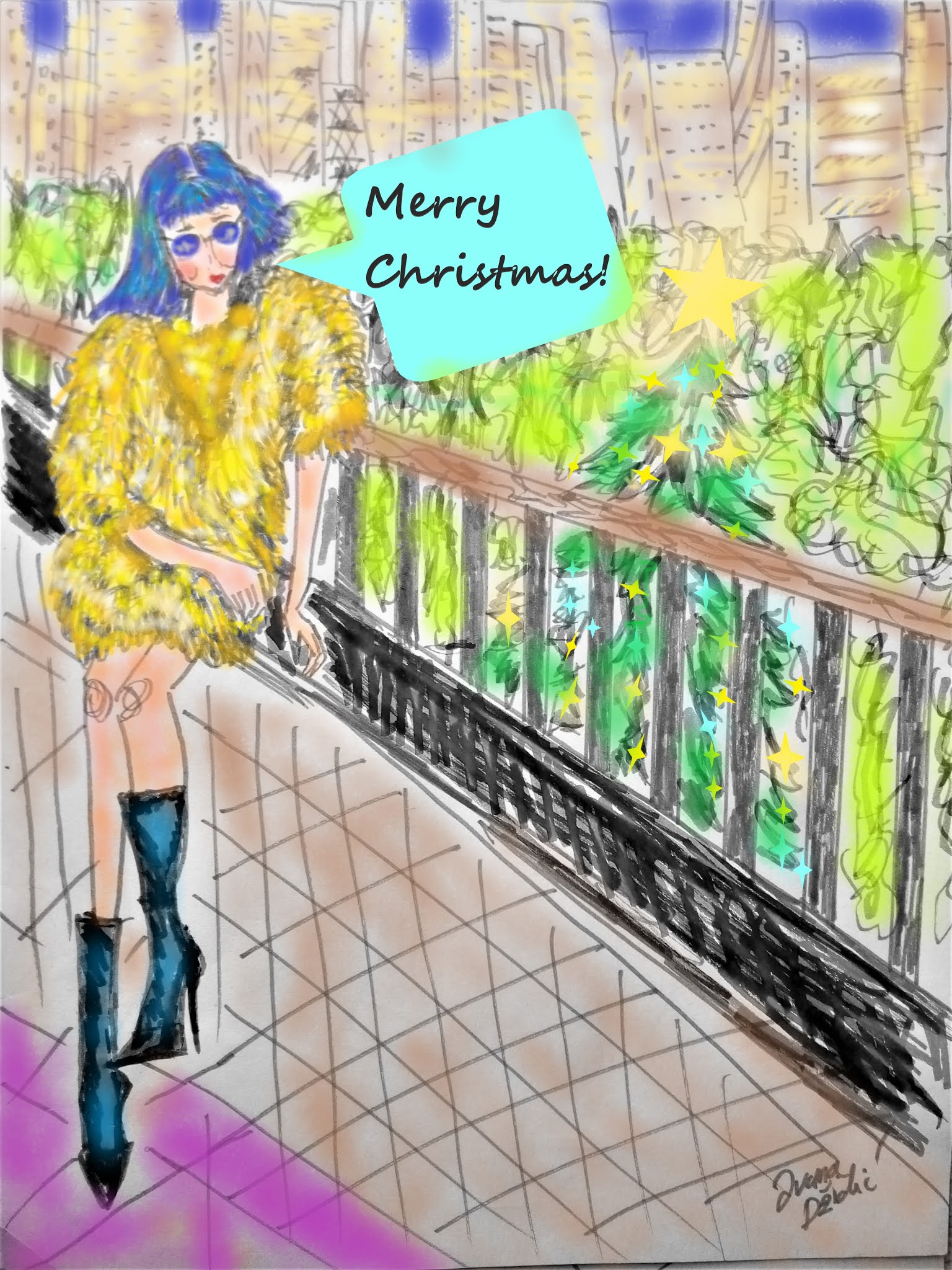 THE ORIGINAL MARKER ILLUSTRATIONS WITHOUT ANY RETOUCHING: 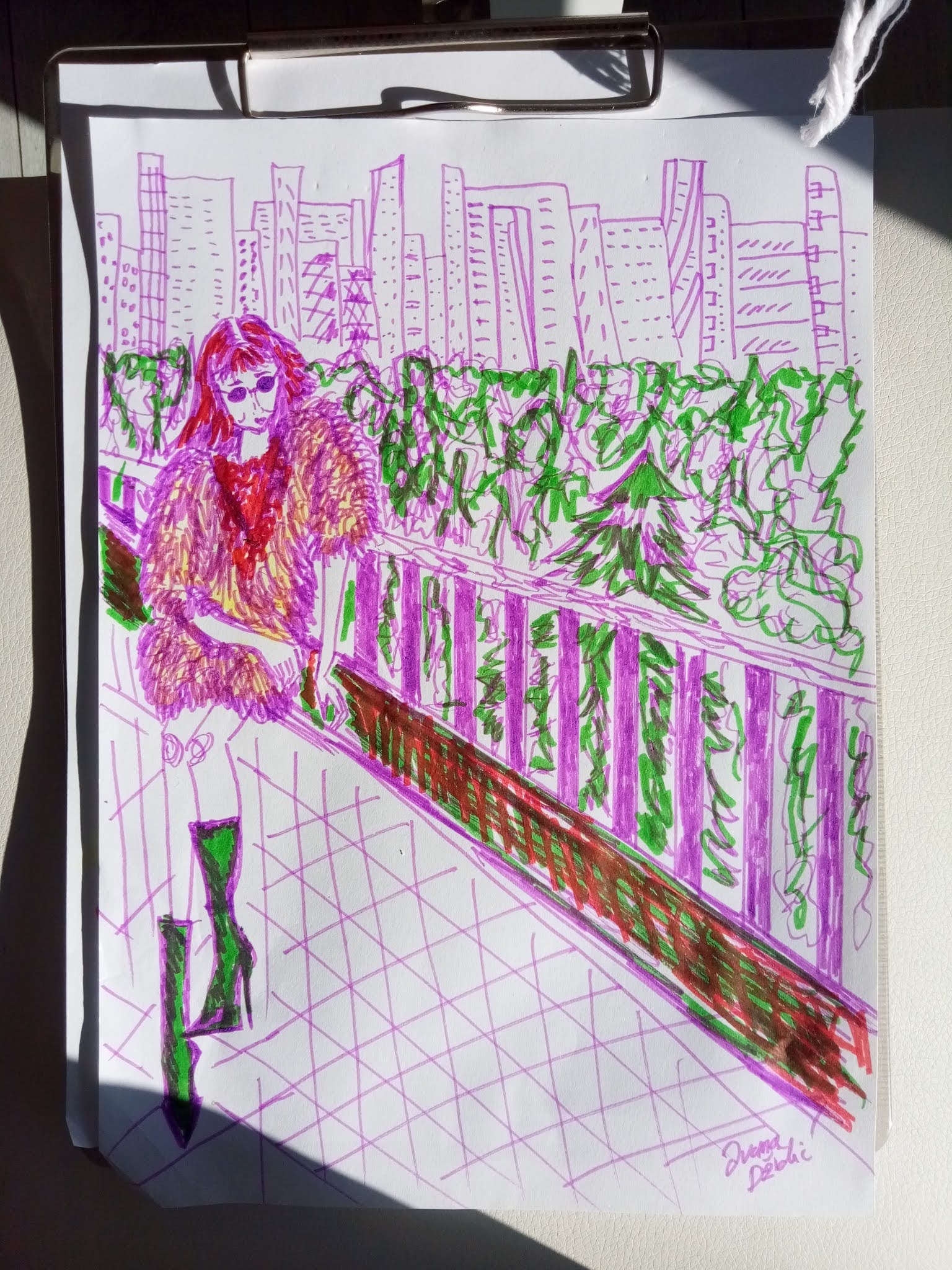 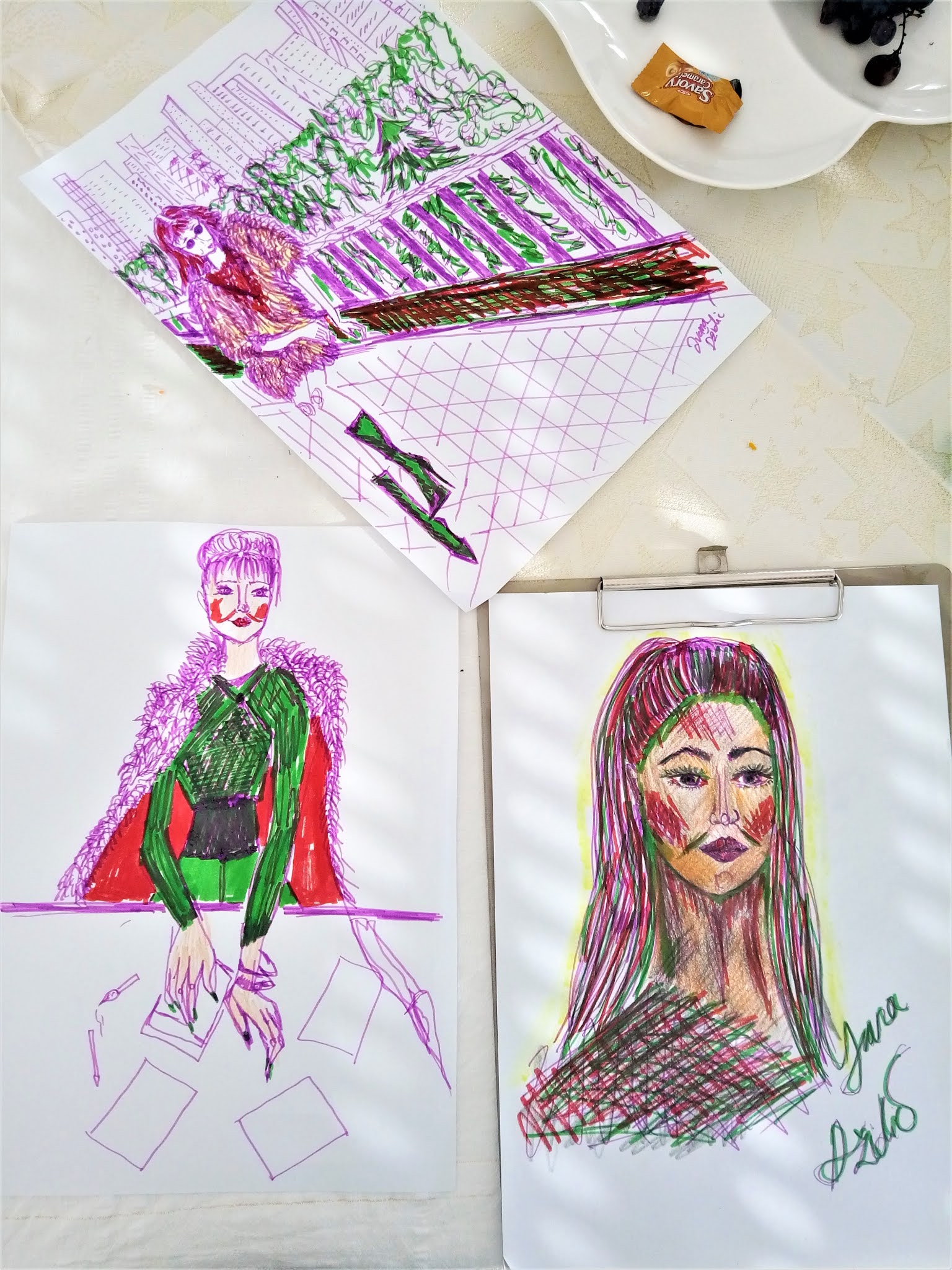 MORE MARKER ILLUSTRATIONS, FASHION SKETCHES AND PORTRAIT PRACTICE- I'm currently making some new fashion templates for myself to use, trying to find and illustrate poses that are not so common, just to keep things interesting. While I was working on the pose, I also illustrated some clothes- why let paper go to waste? I also sketches some faces really quick. I also illustrated one girl walking with a bouquet of flowers- that's a recurring theme in my illustrations now that I think of it. 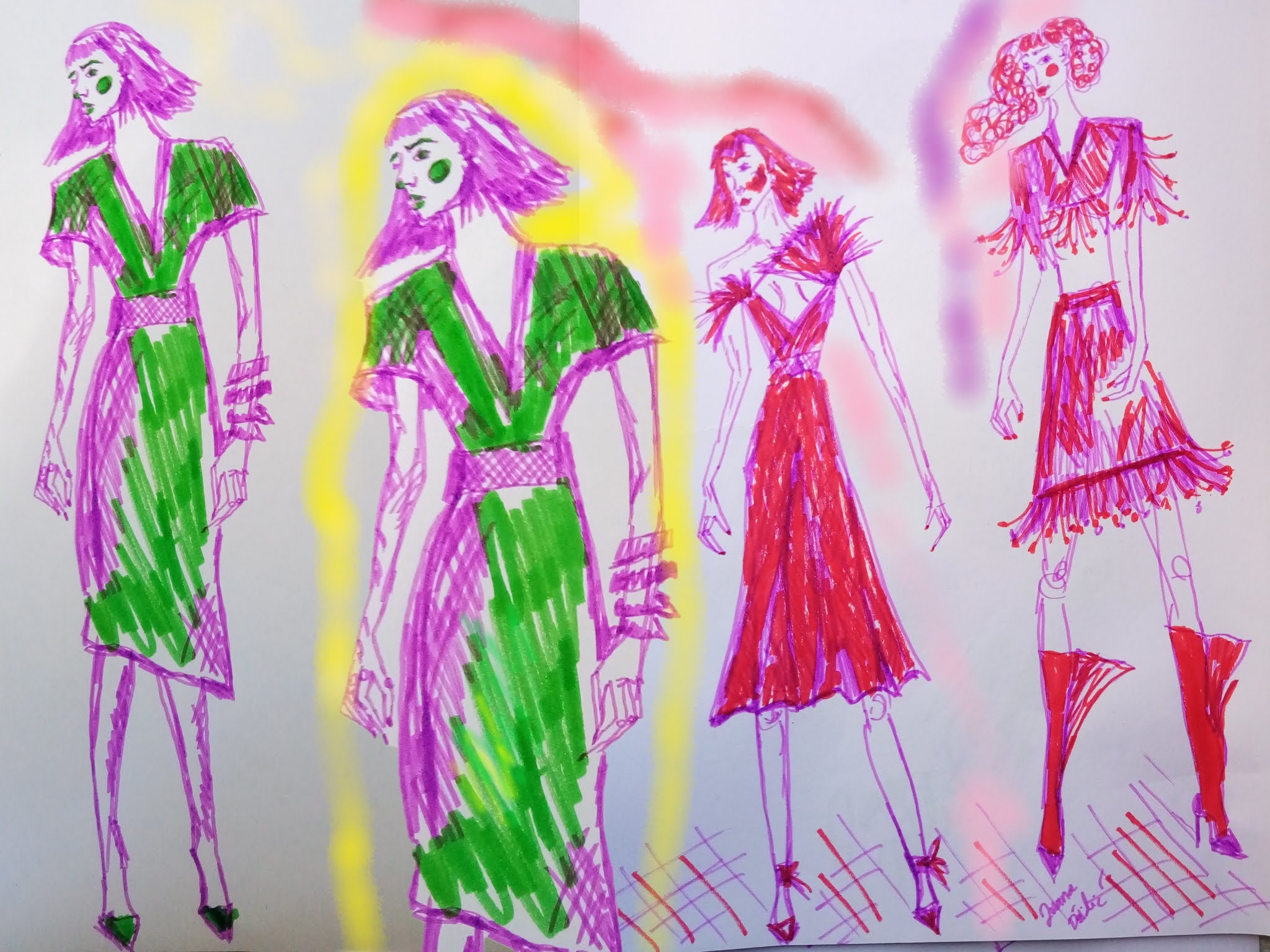 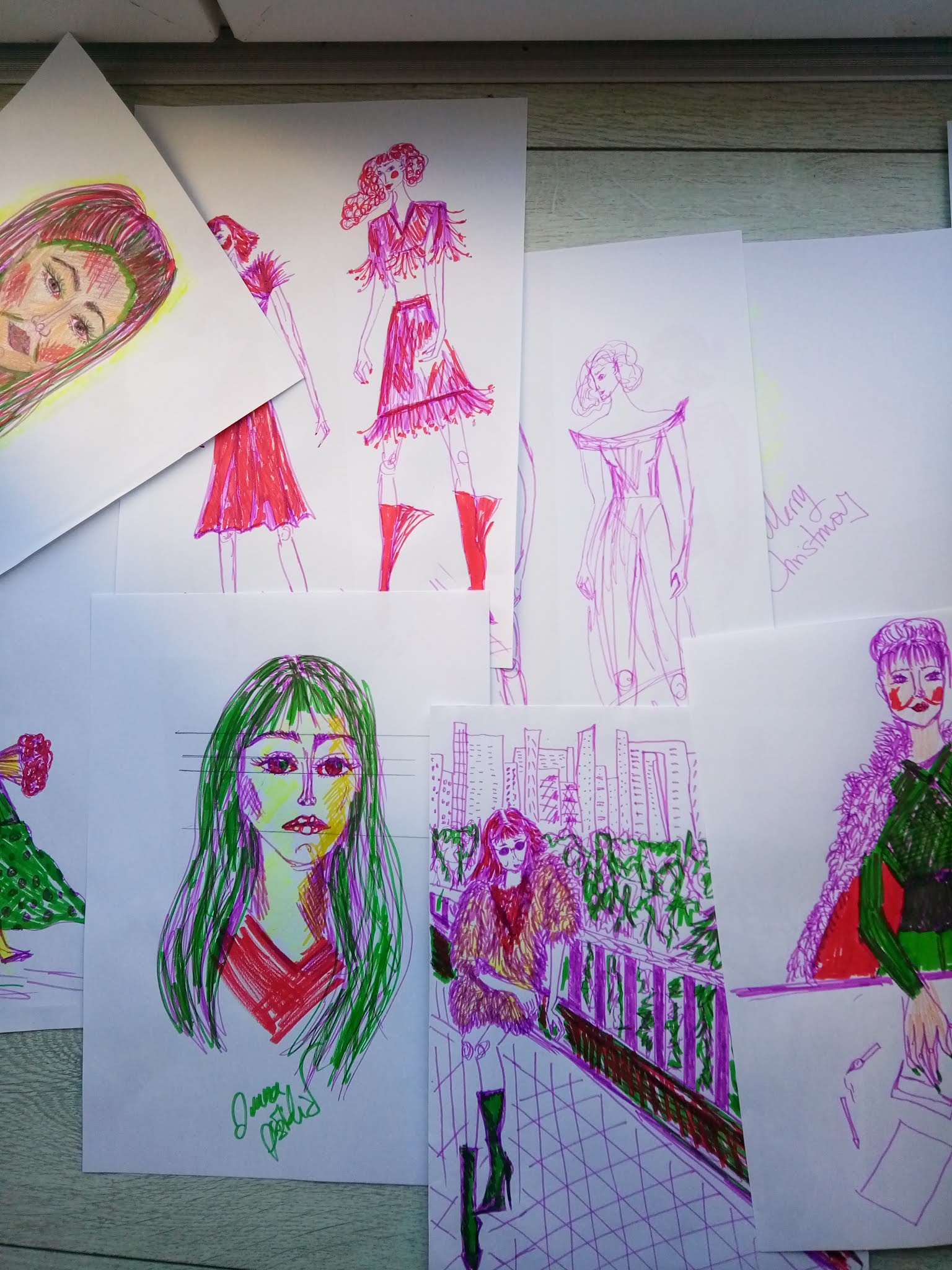 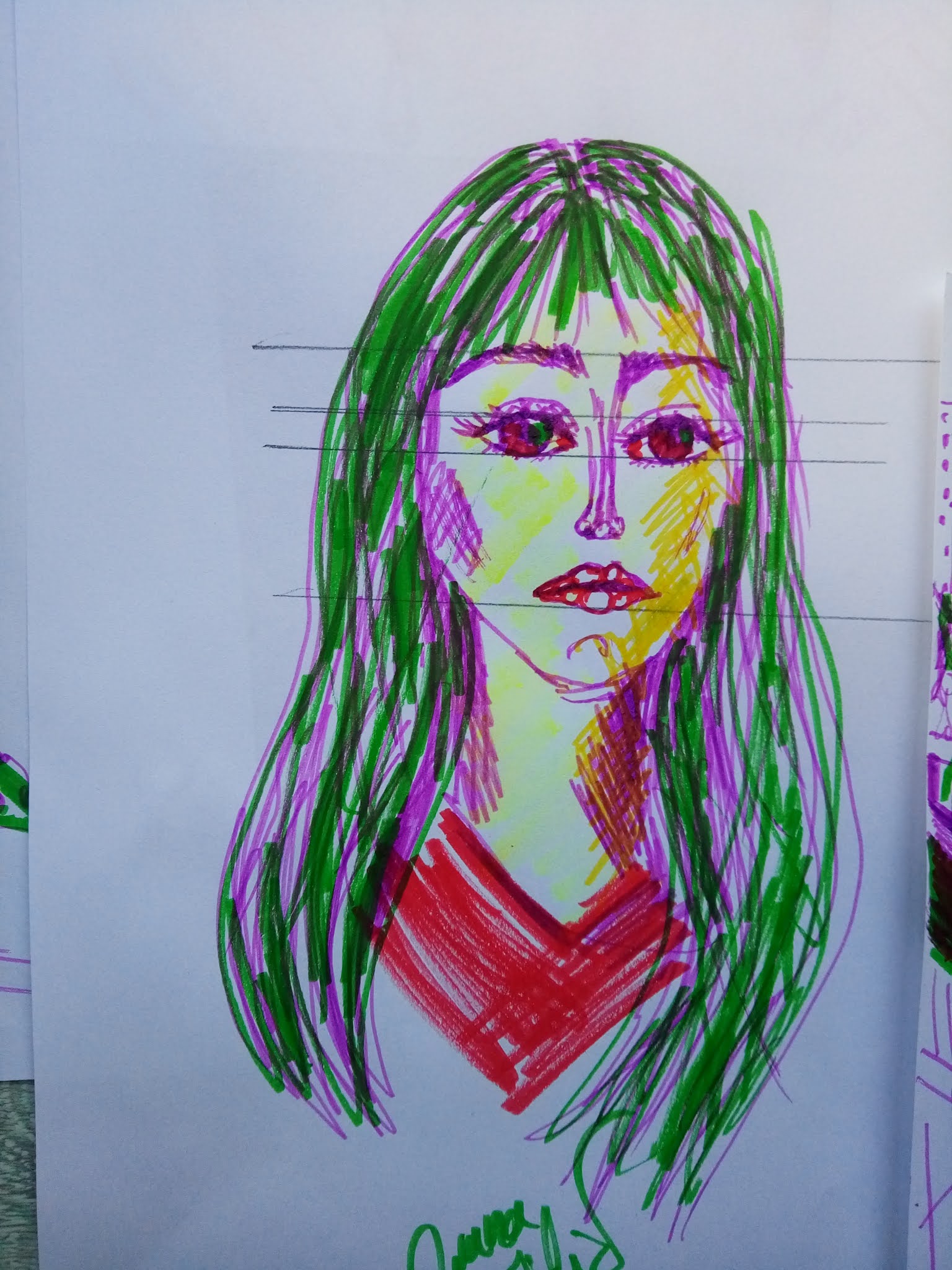 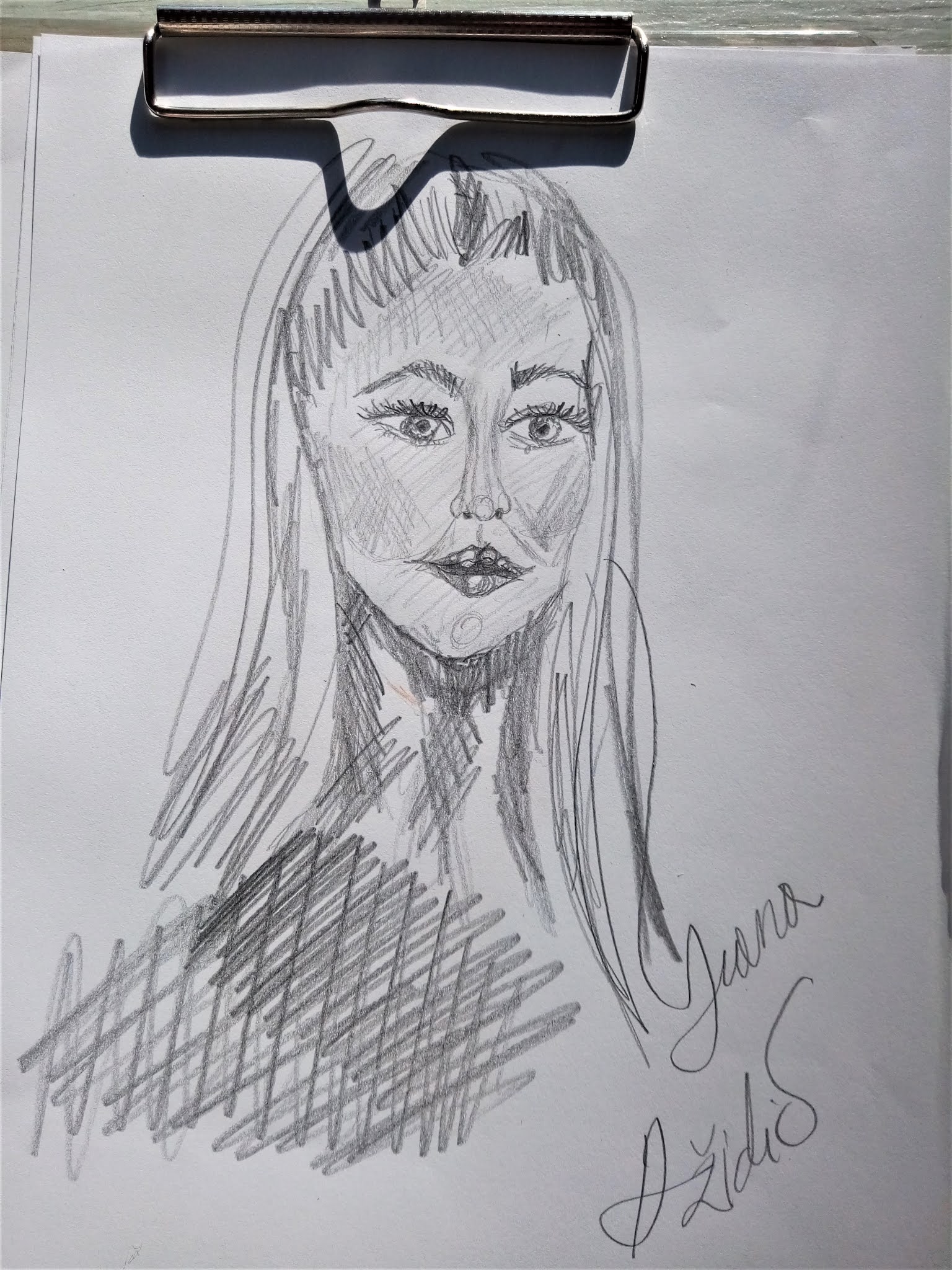 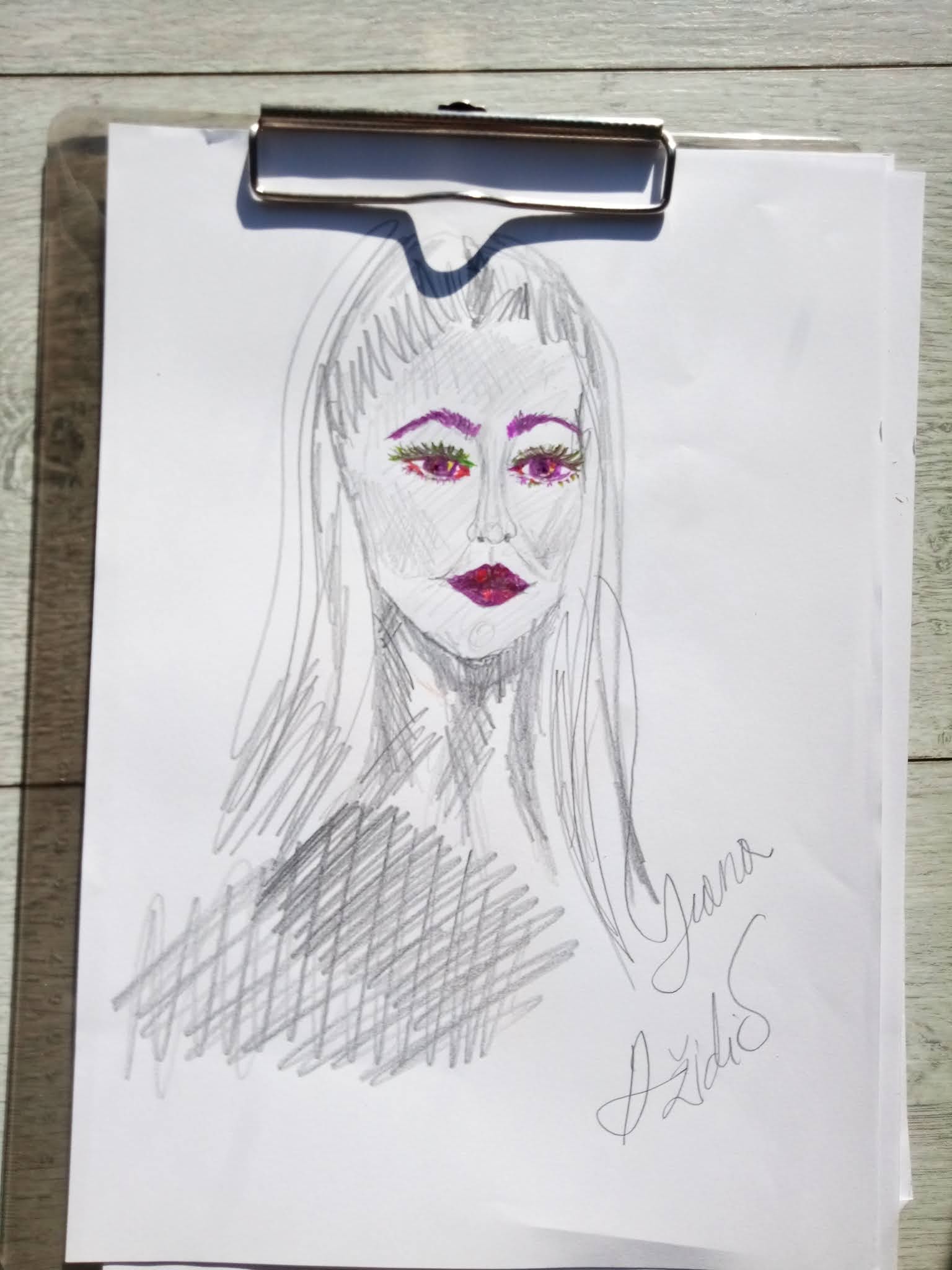 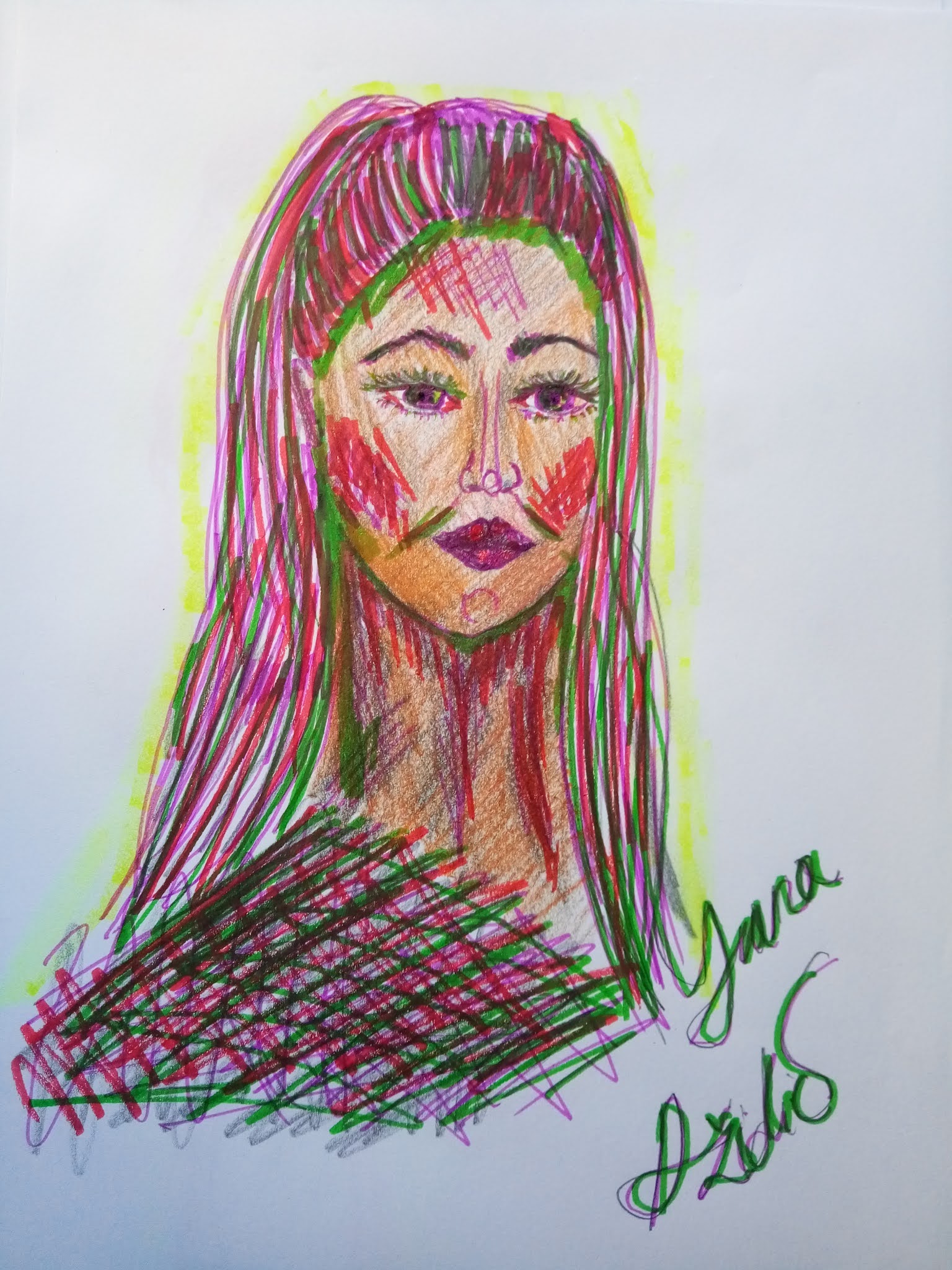 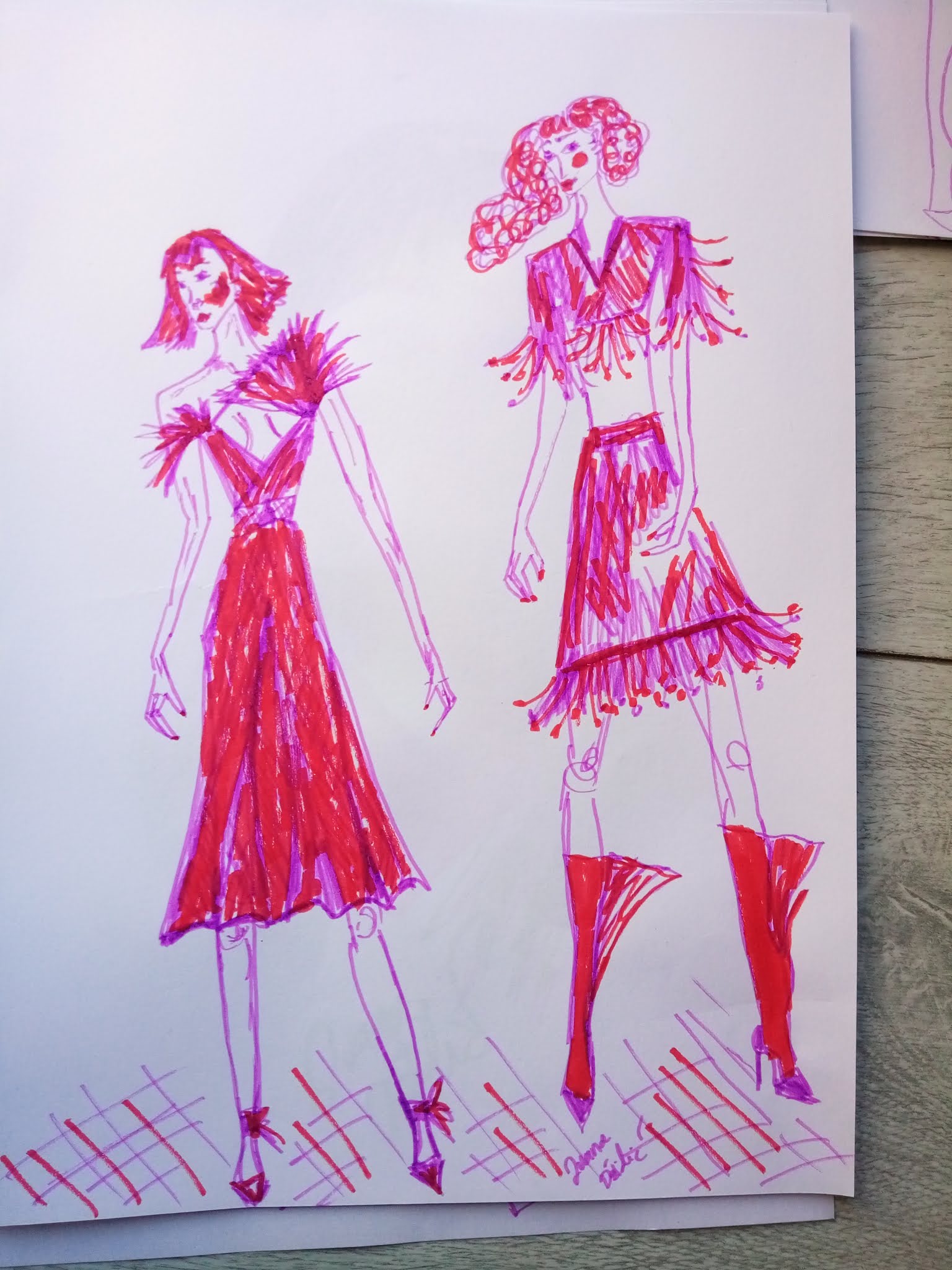 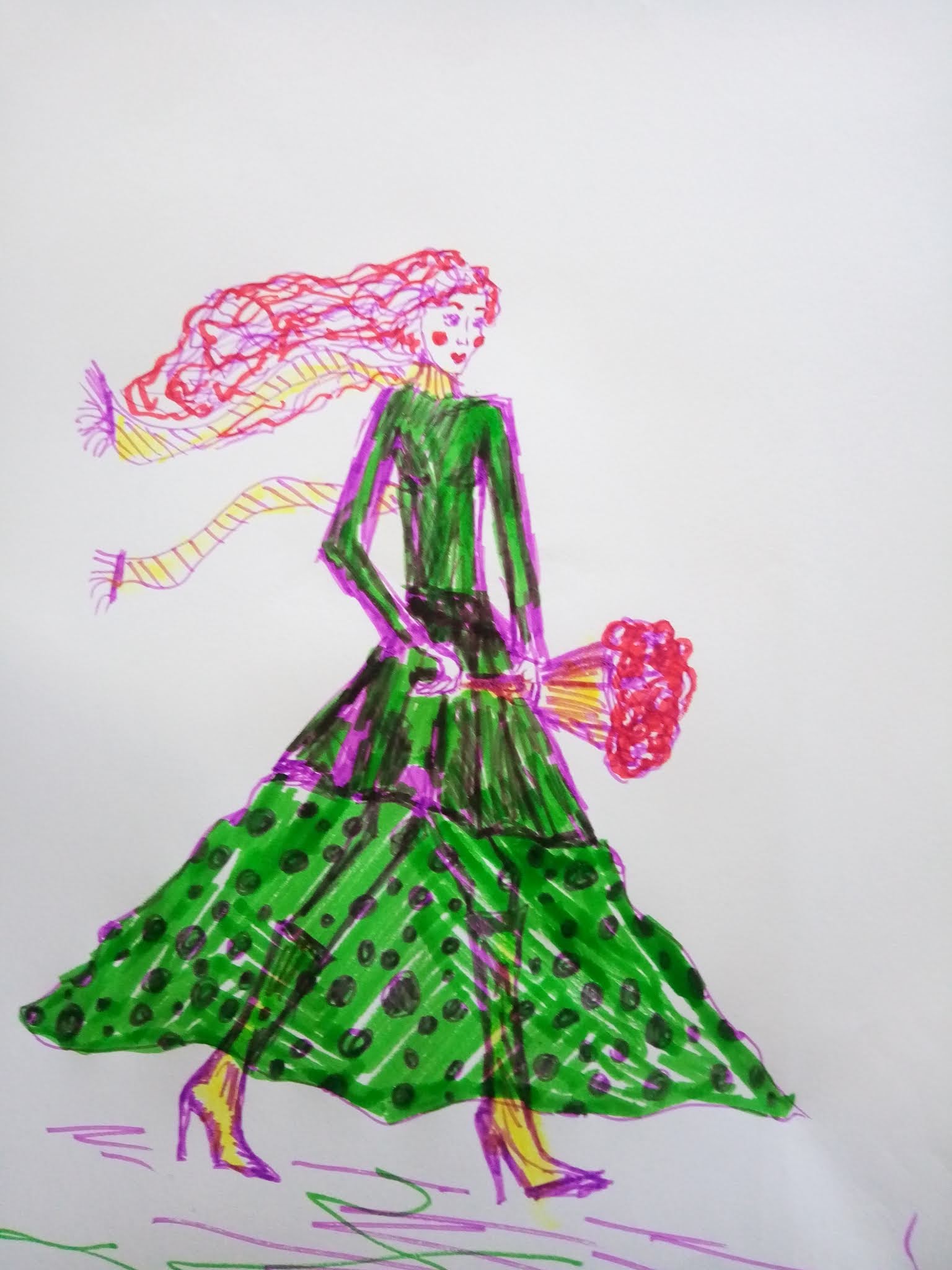 FASHION ILLUSTRATOR AT WORK- ART IN THE MAKING
Bellow is an illustration I'm still working on. I had this idea to draw an illustrator at work so I draw a quick version with markers and then I coloured it digitally. I already have five or six different versions of this idea. I'll show them all some other time. Who knows what will be the final version? 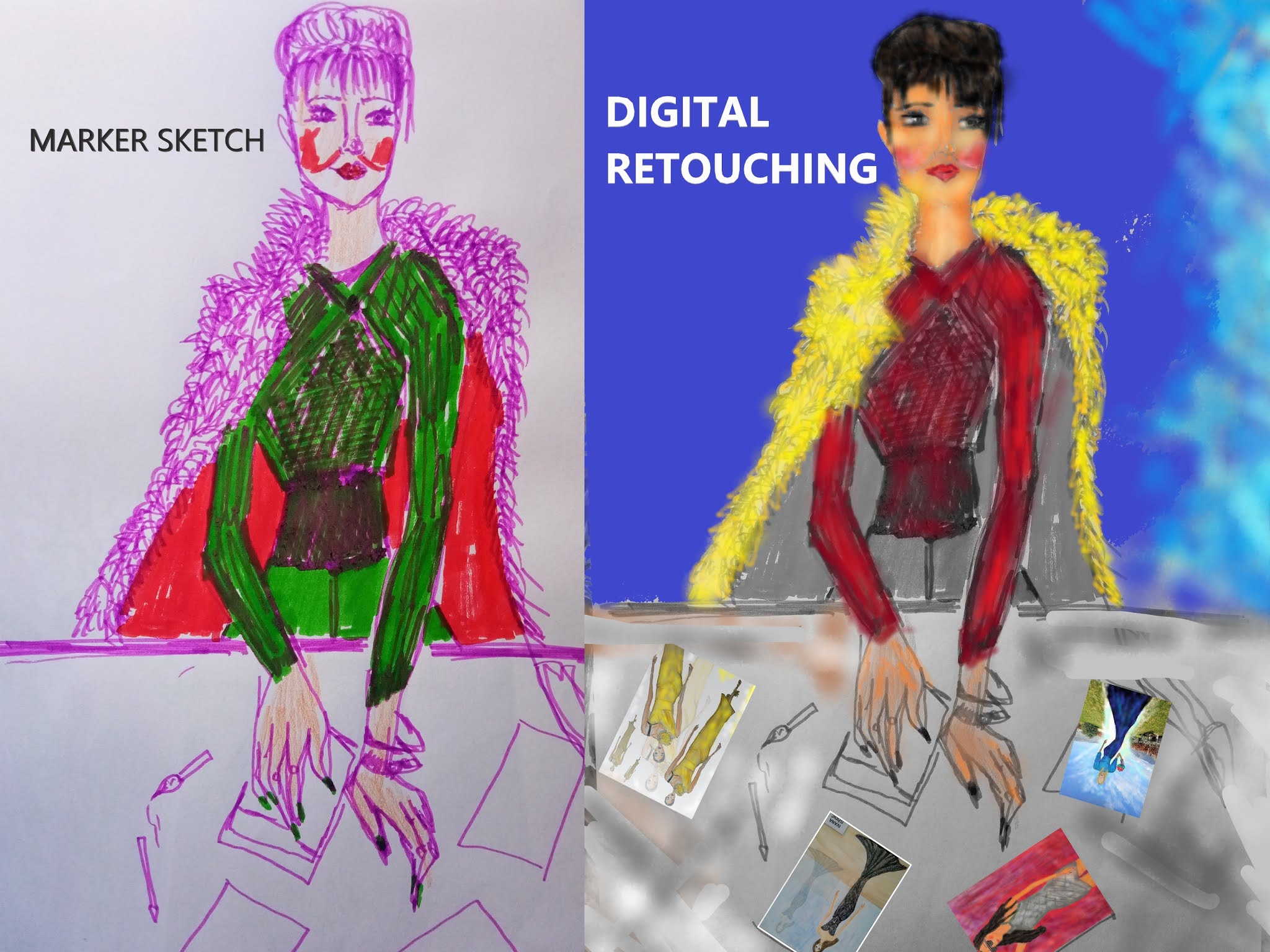 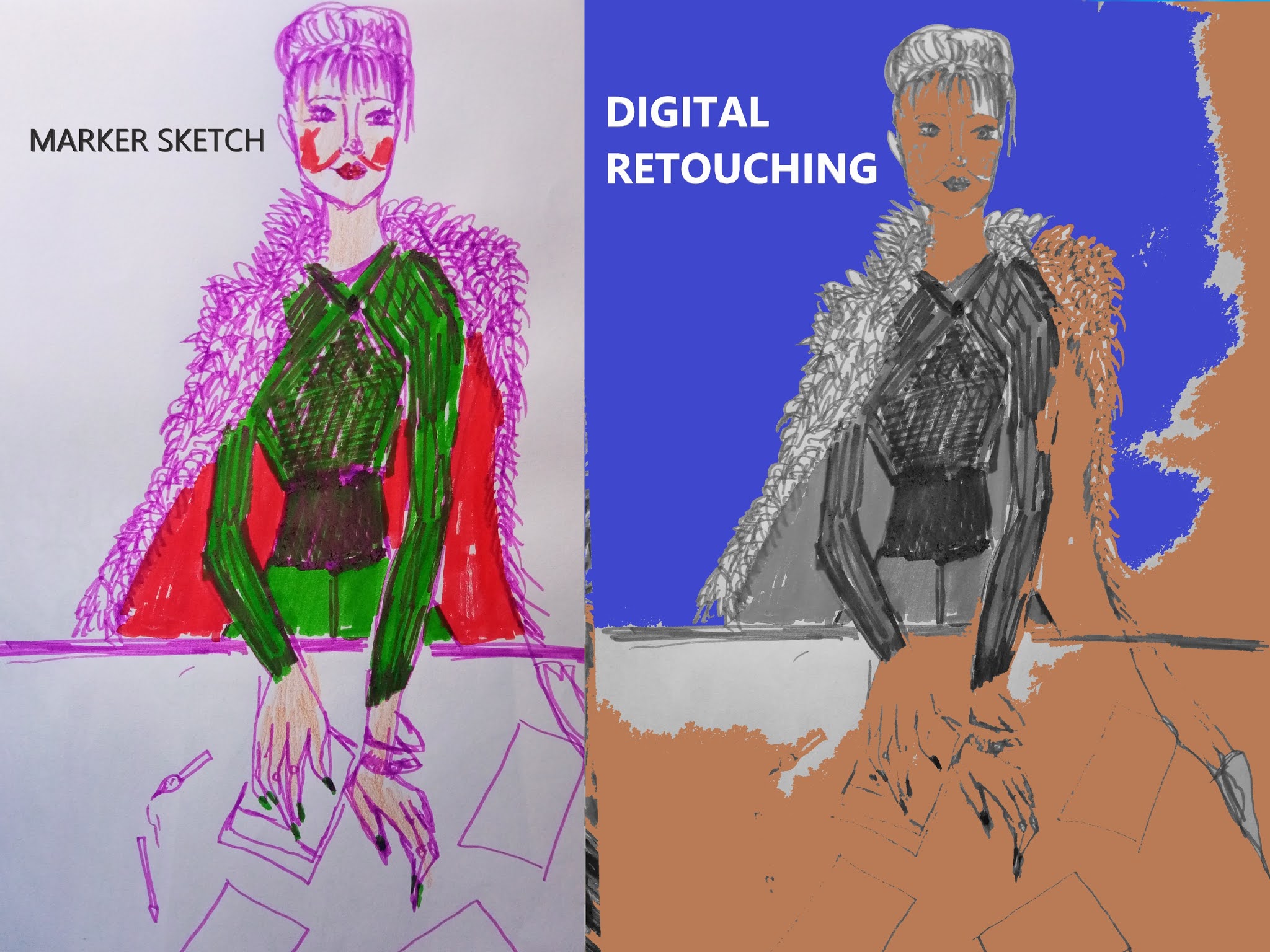 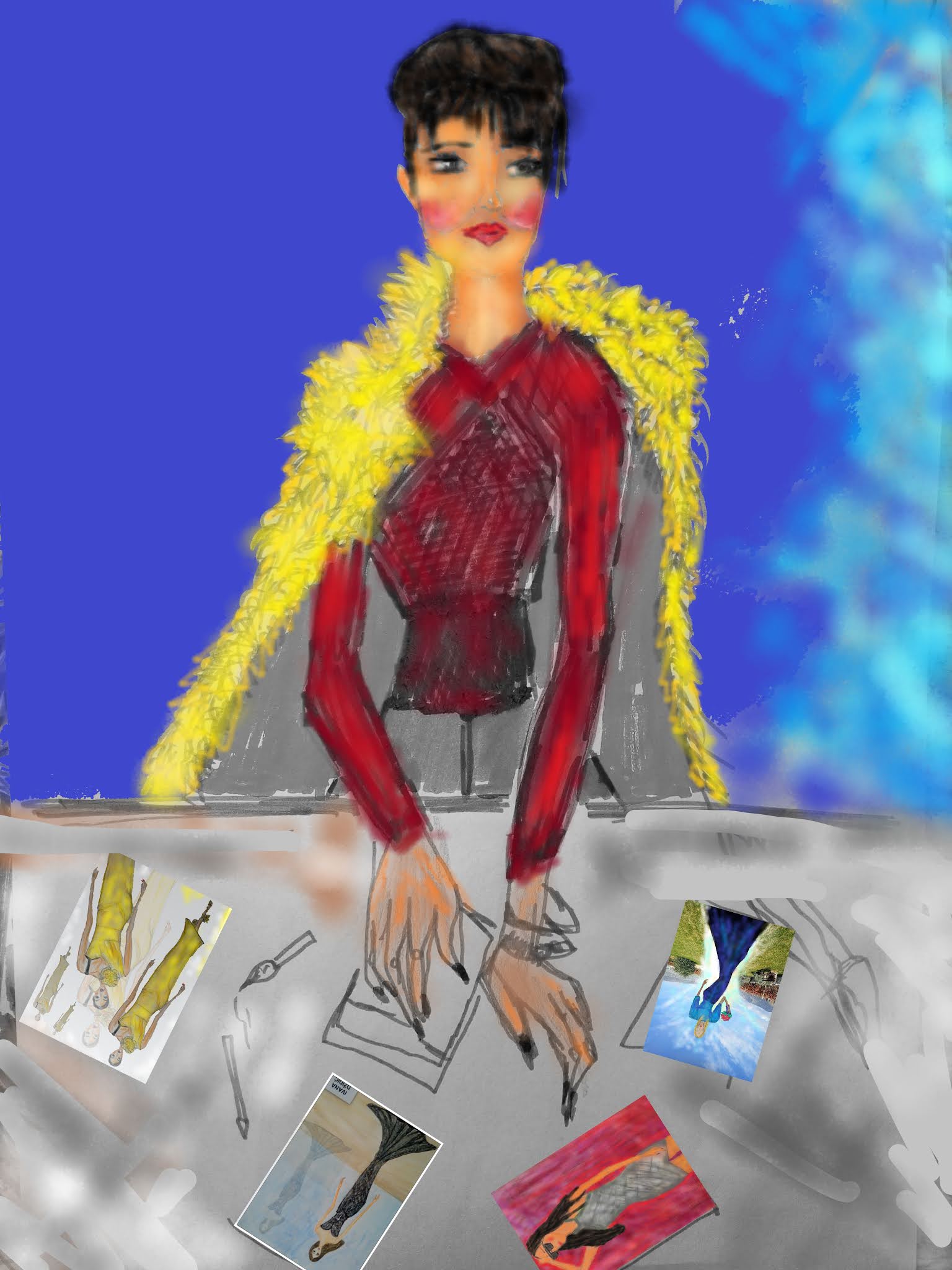 Thank you for stopping by and reading. Have a nice day! Happy Sunday! 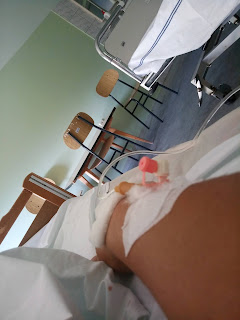 Hi guys! I'm currently in hospital because of complications related to my Chron disease. I was  admitted two days ago  and  I  will probably be discharged by Monday. Still, it will depend on my test results. I've felt better ever since I received blood transfusions yesterday. Hopefully, I will be out soon. For better or worse, I have a lot of experience with hospitalizations, so I adapt easily enough to them. What must be done, must be done. When you live with an immune and chronic illness, you have to learn to be patiented, disciplined and strong. Thank you for stopping by.
Read more 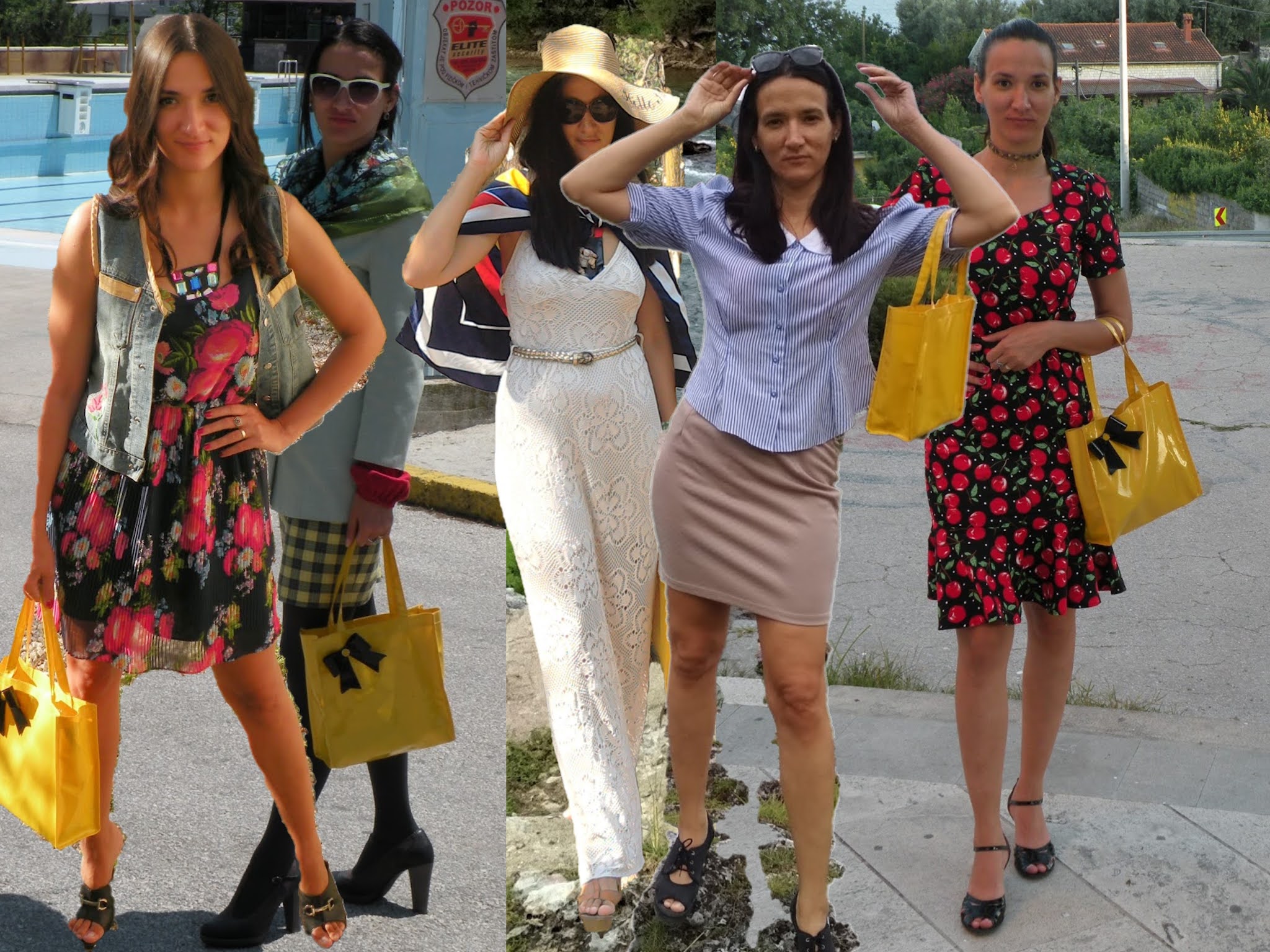 Hello readers and fellow bloggers! How are you doing? Today I will show you forty- five ways to style a plastic yellow bag. I told you I wear this bag often enough for it to be considered a sustainable piece in my wardrobe. However,  telling is one thing and showing it is another. So, this evening I have spent more than 2 hours behind the screen of my laptop, going through old outfits published on my blog. Guess what? I managed to find 45 outfits with this yellow bag. I'm sure I could find a few more if I continued looking but I think three hours is more than enough time spent putting together a post, don't you? Not that I consider it lost time. Going through my old posts, I revived a lot of memories. Isn't it amazing that I have been blogging since 2012? That's almost a decade of continuous posting. I've had this yellow bag since 2014 so that's quite some time. I'm not sure what is the real number of times I have worn it because I don't document all of
Read more 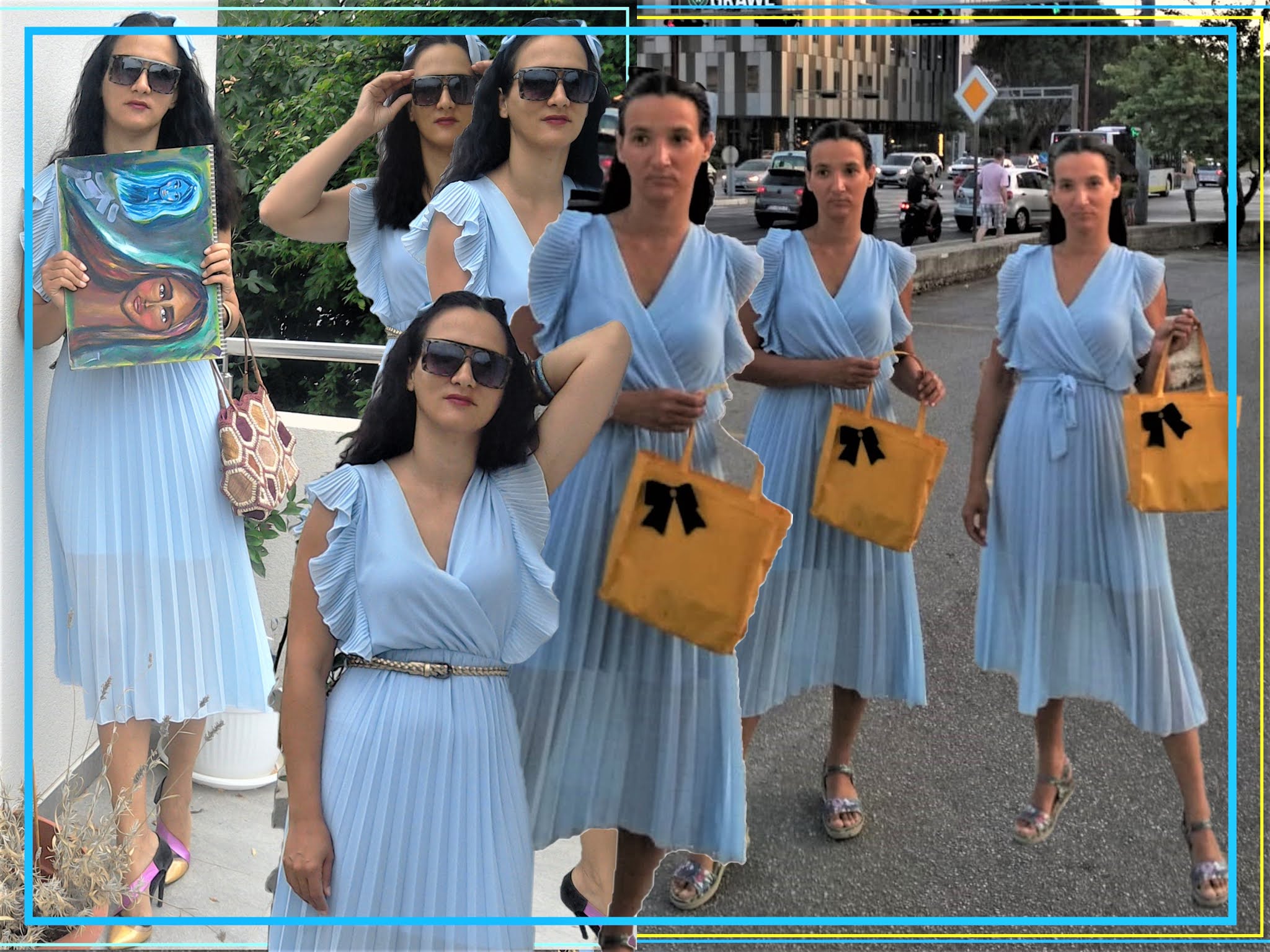 Hello dear readers and fellow bloggers! I think I may have found THE perfect blue dress for me. You know that I'm very selective with what I bring into my closet because I enjoy shopping my closet so much. Sometimes I do buy something new. Do you remember how in my last post I promised to show you what was in my shopping bag? Well, today I will do just that. The newly acquired item in my closet is a pleated blue dress with ruffled sleeves. It's from Croatian fashion brand Amadeus (aka AMDS). I've never collaborated with this brand, but I've written about them many times just because I like them so much. I browsed their website shop looking for this dress to link it up for you, but I didn't manage to find the exact one (maybe it sold). So, I will link up this dark blue pleated dress that is quite similar instead.  When I walked up in the store, this dress immediately caught my eye. It was on sale, but I would have bought it even if it wasn't because it is so perf
Read more