July 02, 2019
With summer being in full spring, I caught myself thinking about iconic summer outfits. Do you know what came to my mind? Costumes/outfits worn by Monica Belluci when she played Malena Scordia in an iconic Italian movie set on Sicily.  The costumes for that movie were designed by an acclaimed Italian costume designer Maurizio Millenotti and he outdone himself! Seeing that Malena is a historical movie, Maurizio choose quite timeless outfits and cuts that will ever go out of style. That fact makes Malena movie the perfect place to look for inspiration! Moreover, I feel that Monica Belluci's personal style is quite similar to Malena's (i.e. to the style of the character she is playing). There is definitely a Mediterranean lady feel about Malena/Monica Bellucci. What says summer better than Mediterranean and Sicily? Today we'll analyze Malena's style and see what we can learn from her. There is much to learn! Having analyzed looks that Monica wore in iconic Malena film, I've came up with 10 style lessons we can take to heart ( I will elaborate on them a bit later), and they can be summed up in ten fashion commands:

This will be neither a movie review nor a cosplay post. I won't be recreating any of her vintage looks (that's a fun idea for a future post, though), rather I will browse my archives to look for Malena inspired outfits. This post will be more about hacking Malena's style, discovering the secret of her allure and elaborating on them. Seeing that I was born and raised in the Mediterranean region myself, this is a style that is very close to my heart. I'll share outfits that seem very 'Malena' to me (and who knows perhaps I was subconsciously influenced by Malena when I wore them). In fact, I have my husband to thank for this idea. He was the first to call me Malena (in reference to the movie) when I wore this Mediterranean style outfit back in 2015. 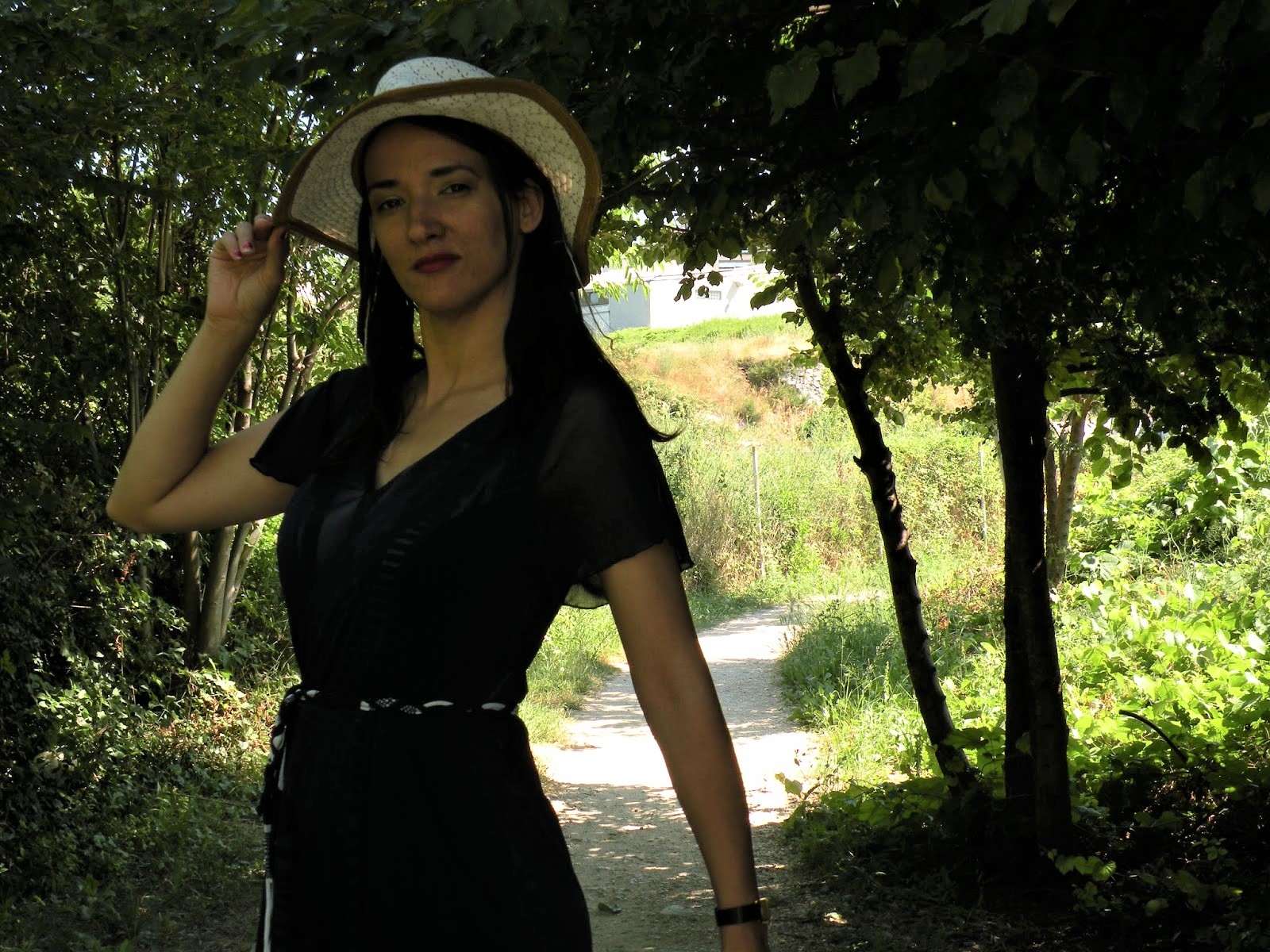 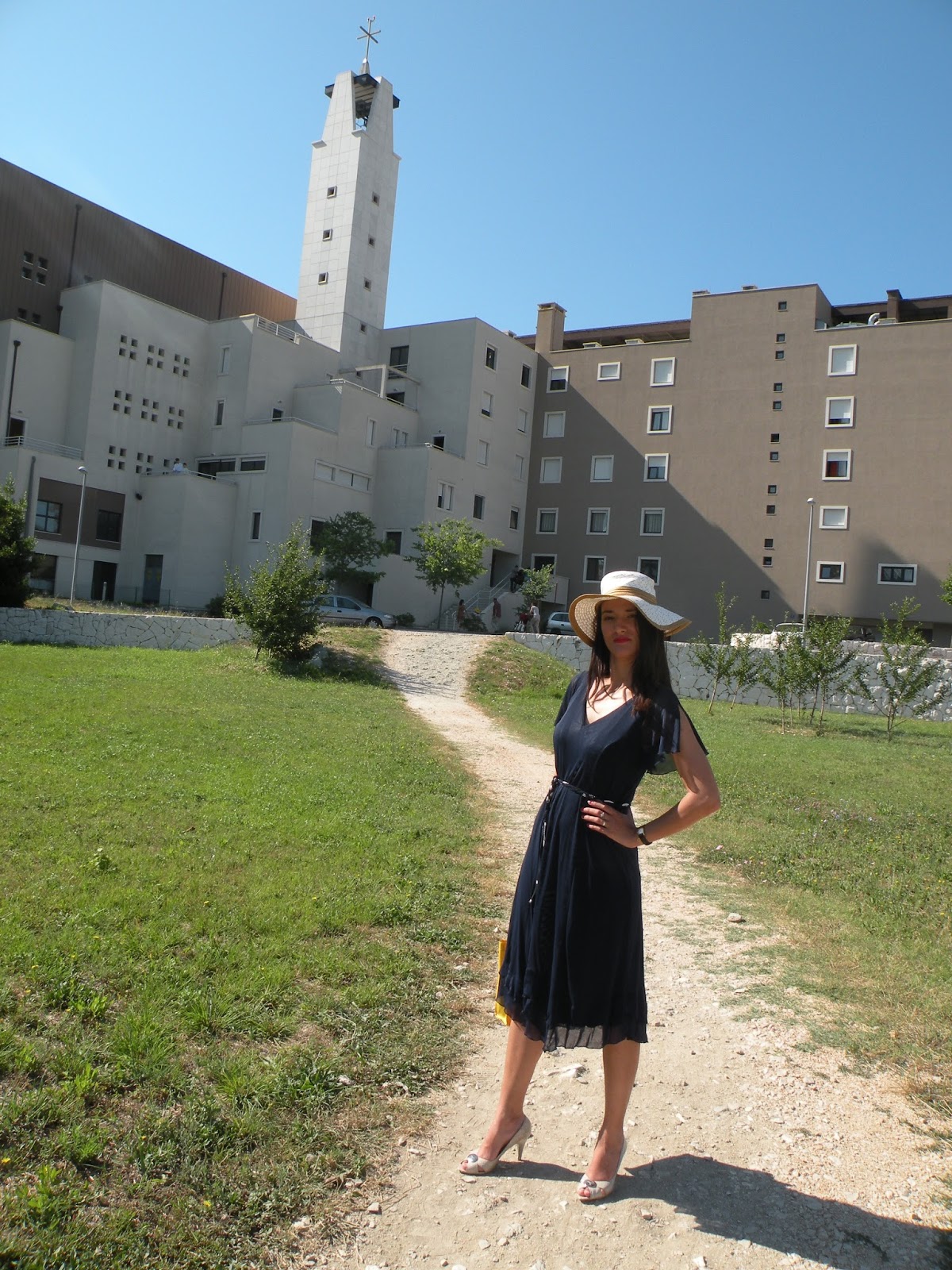 WHO IS MALENA?
I won't get into details about the film itself, you can easily find a summary of it online (if you haven't seen it), but it is worth noting that it is probably the film that propelled Monica Bellucci into stardom. The movie takes place prior and during the second world war, so think 1940-ties in terms of dressing style. Sicily is a mythical and magical island, and this movie does a great job at capturing that. Released in 2000 (almost 20 years ago), this movie continues to inspire fashionistas and fashion designers. If you take a look at Dolce & Gabbana's campaigns, you'll see a distinct Malena's flavour to them (and that is not surprising because D&G duo often cites Sicily is their inspiration). Readers of my blog will remember that I often illustrate D&G fashion runaway looks (see this fashion illustration here, here , here and here), so you know it's a style that I absolutely love. However, before we get into analyzing Malena's style, first we need to answer the question: Who is Malena? A beautiful Sicilian woman living in a small and enclosed community, Malena is cursed by her beauty because it makes all the men adore her and all the women hate her (and that makes her terribly isolated but somehow even more beautiful). As an Italian woman, Malena's sense of style would have been influenced by cultural and sociological influences, such as for example Catholicism and Mediterranean culture. 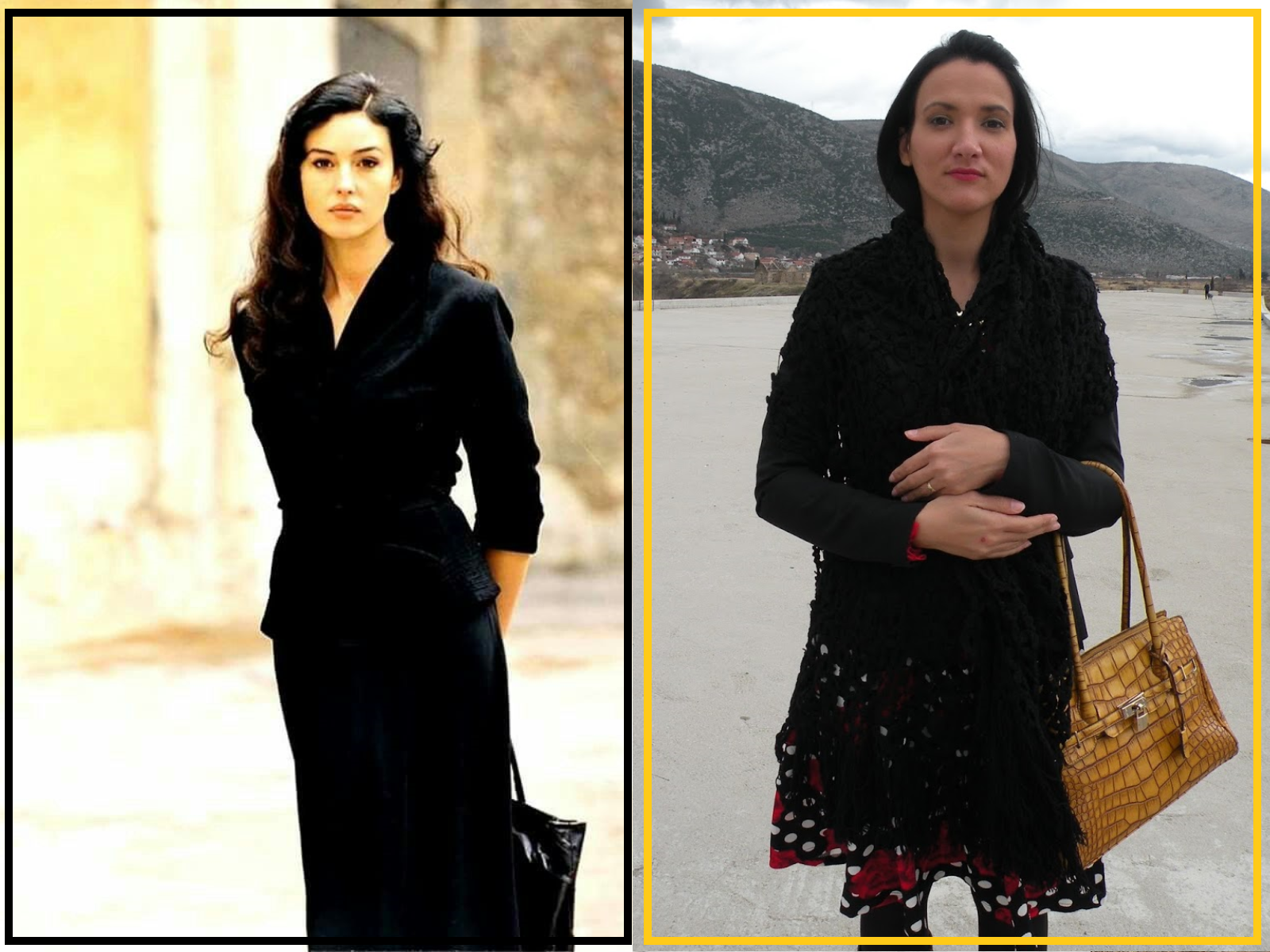 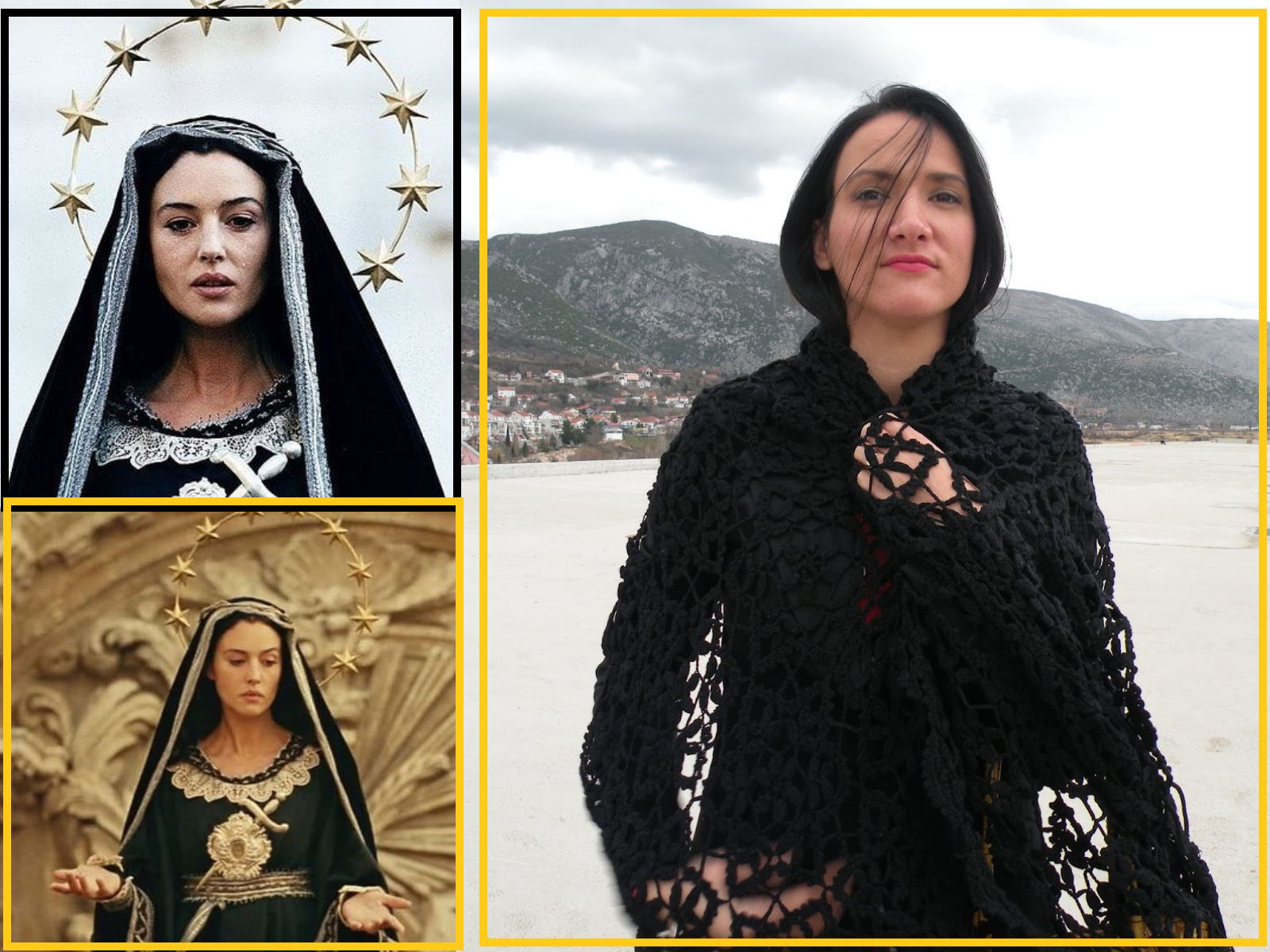 1. DON'T SHOW TOO MUCH SKIN AND STAY AWAY FROM REVEALING OUTFITS
One of the first things you notice about Malena's wardrobe is that she never shows too much skin. Malena's outfits are very balanced in terms of skin exposure. Her dresses and skirts are never too short, too tight and/or provocative. Instead revealing too much, Malena retains a sense of mystery and allure by keeping it classy. The only time she wears a dress without sleeves is when she wears a maxi dress. When Malena/Monica Belluci wears dresses and skirts, they are most often of classical design. In the film, Malena wears both V-neck and closed neckline, but she never reveals too much skin. Long story short, her style could be described as classical and ladylike. It is a vintage style, one could say, but with a distinct Italian flavour. 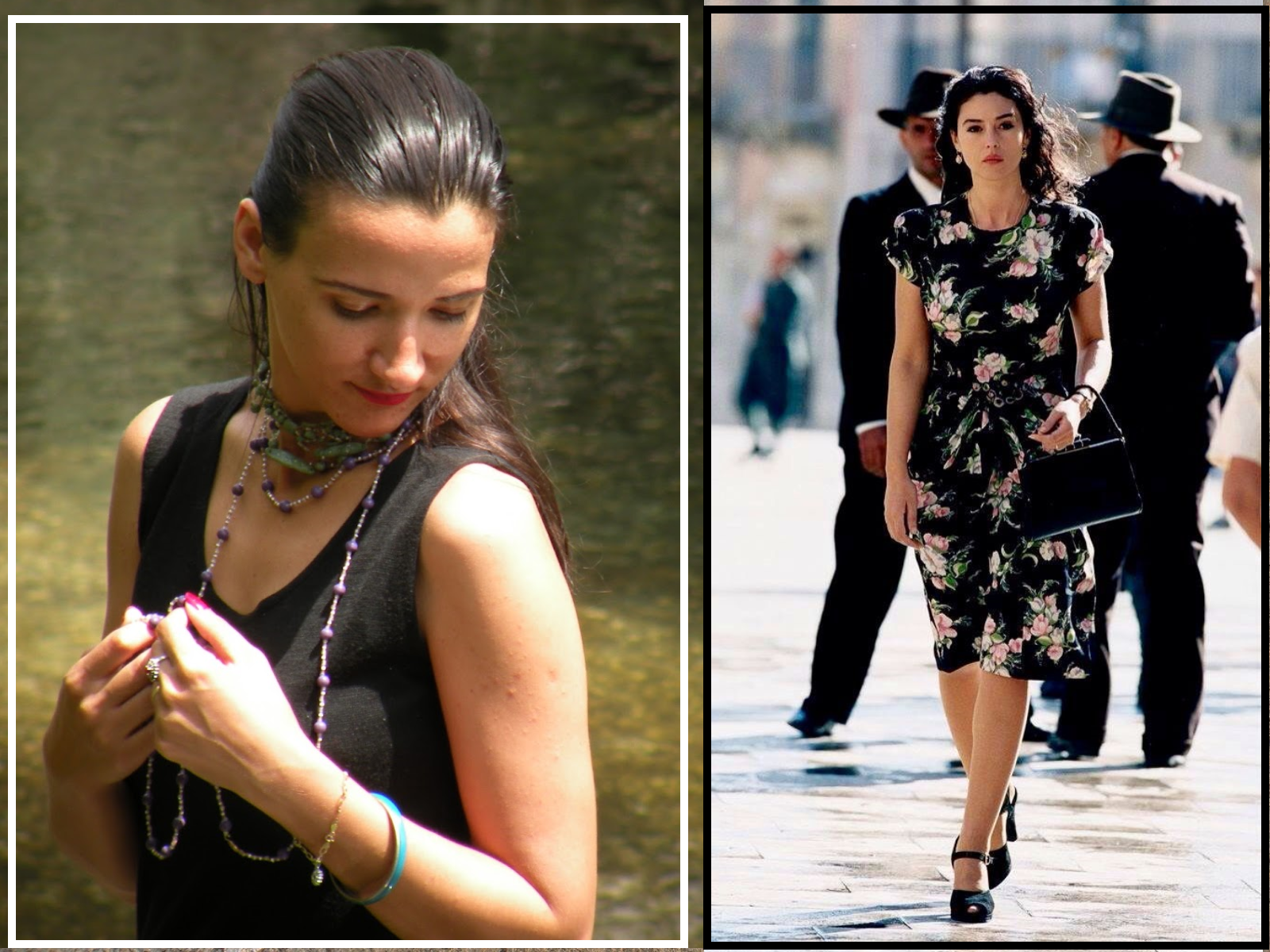 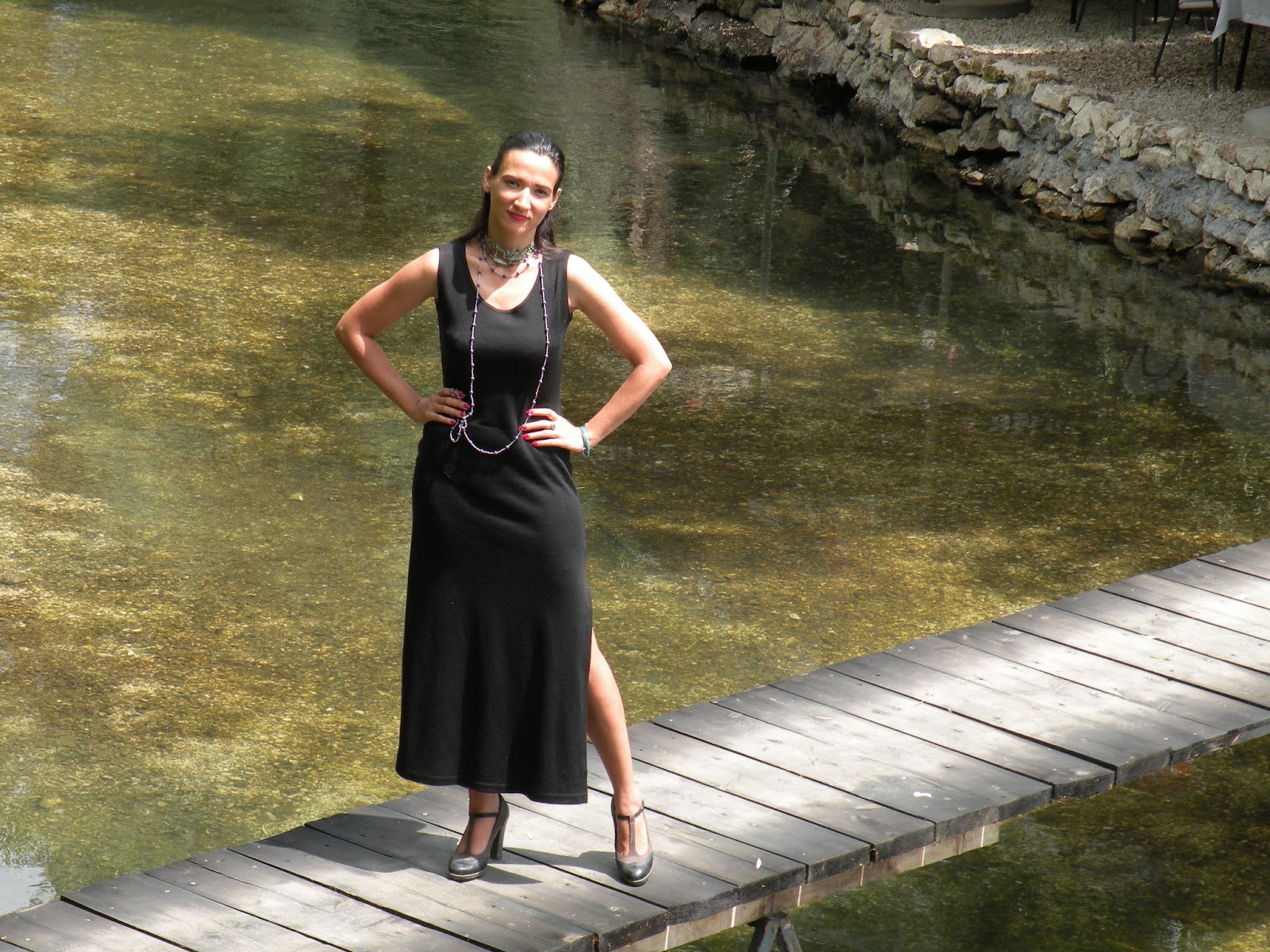 2. WEAR BELLOW THE KNEE PENCIL SKIRTS AND DRESSES
Malena/Monica Bellucci's favourite skirt and dress length is just bellow the knee. Malena is fully aware of benefits of rocking such a classy look. Bellow the knee and midi lengths can be very flattering when worn the right way. Malena often chooses pencil skirts and dresses that complement her hour glass figure perfectly. 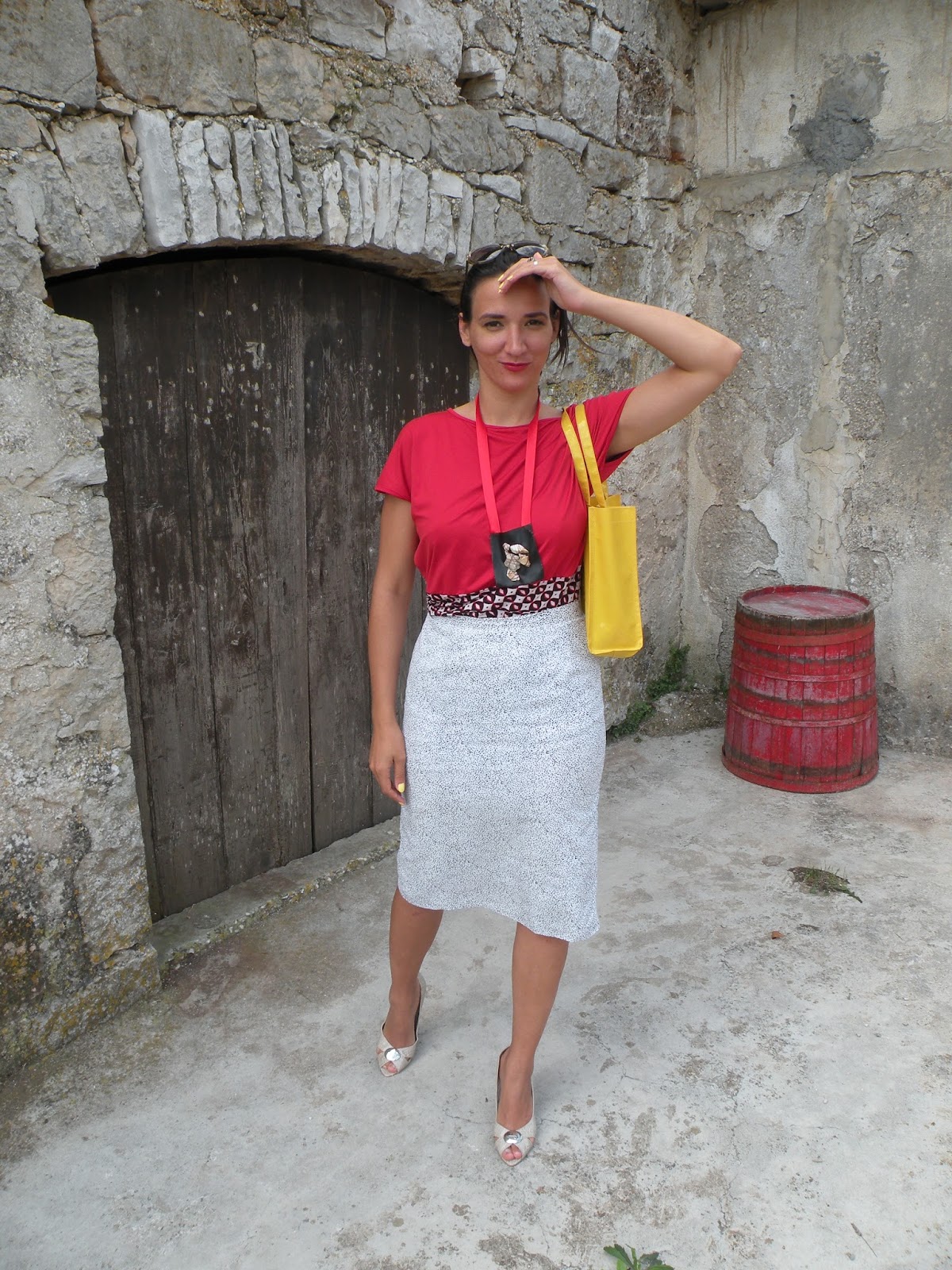 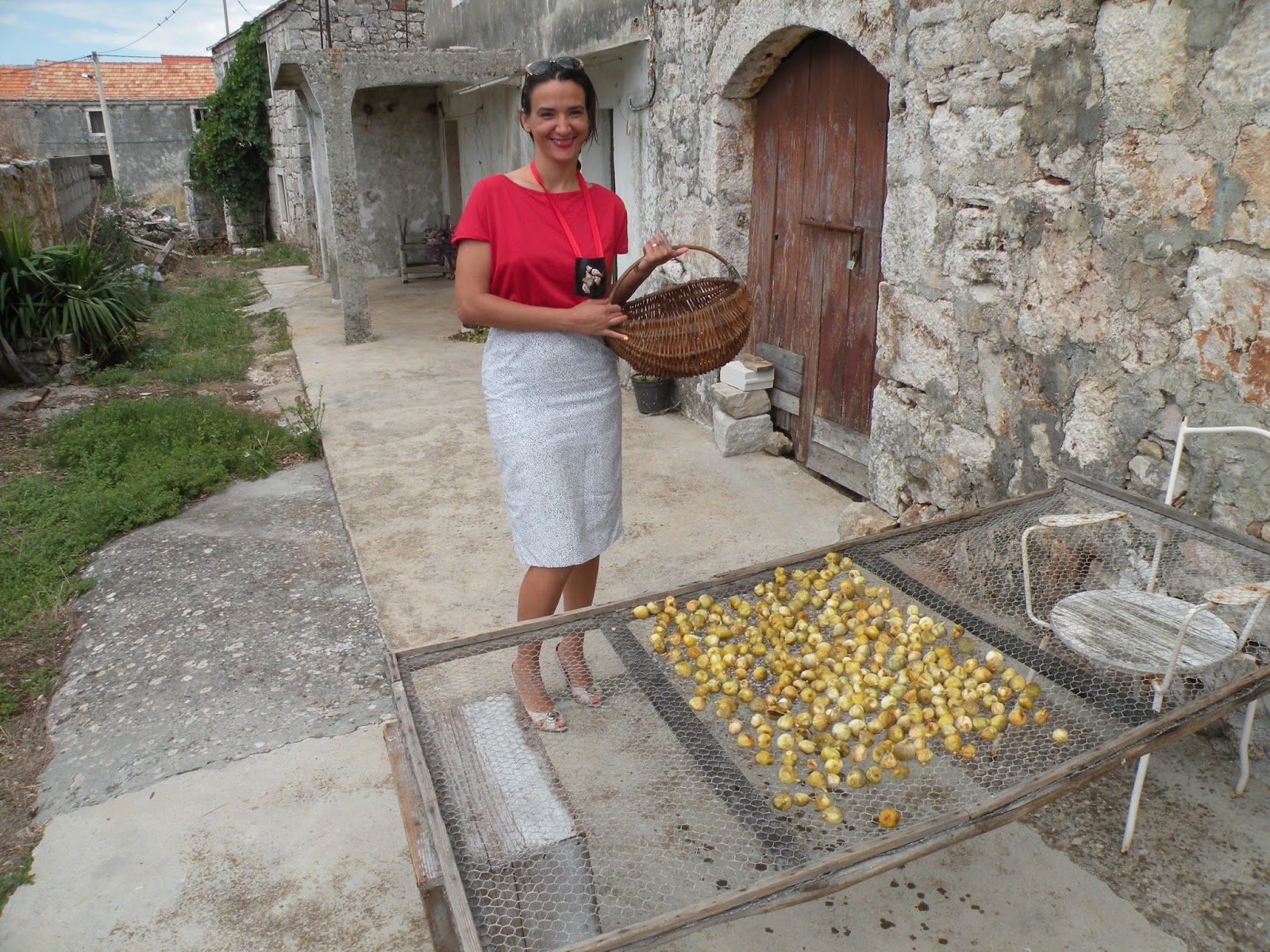 3. OPT FOR NEUTRAL COLOURS (DARK BLUE, WHITE AND BLACK)
Malena has that Mediterranean lady chic down. She is often mesmerizing in all black. In some ways, her style makes me think of Parisian chic, but it is more Italian in feel on overall. It is  a very elegant and chic style. One thing is sure, Malena knows how to wear black. Malena stays away from crazy and vibrant colours, instead opting for a more simple colour palette dominated by dark blue, black and white. If you ask Malena, less is more. 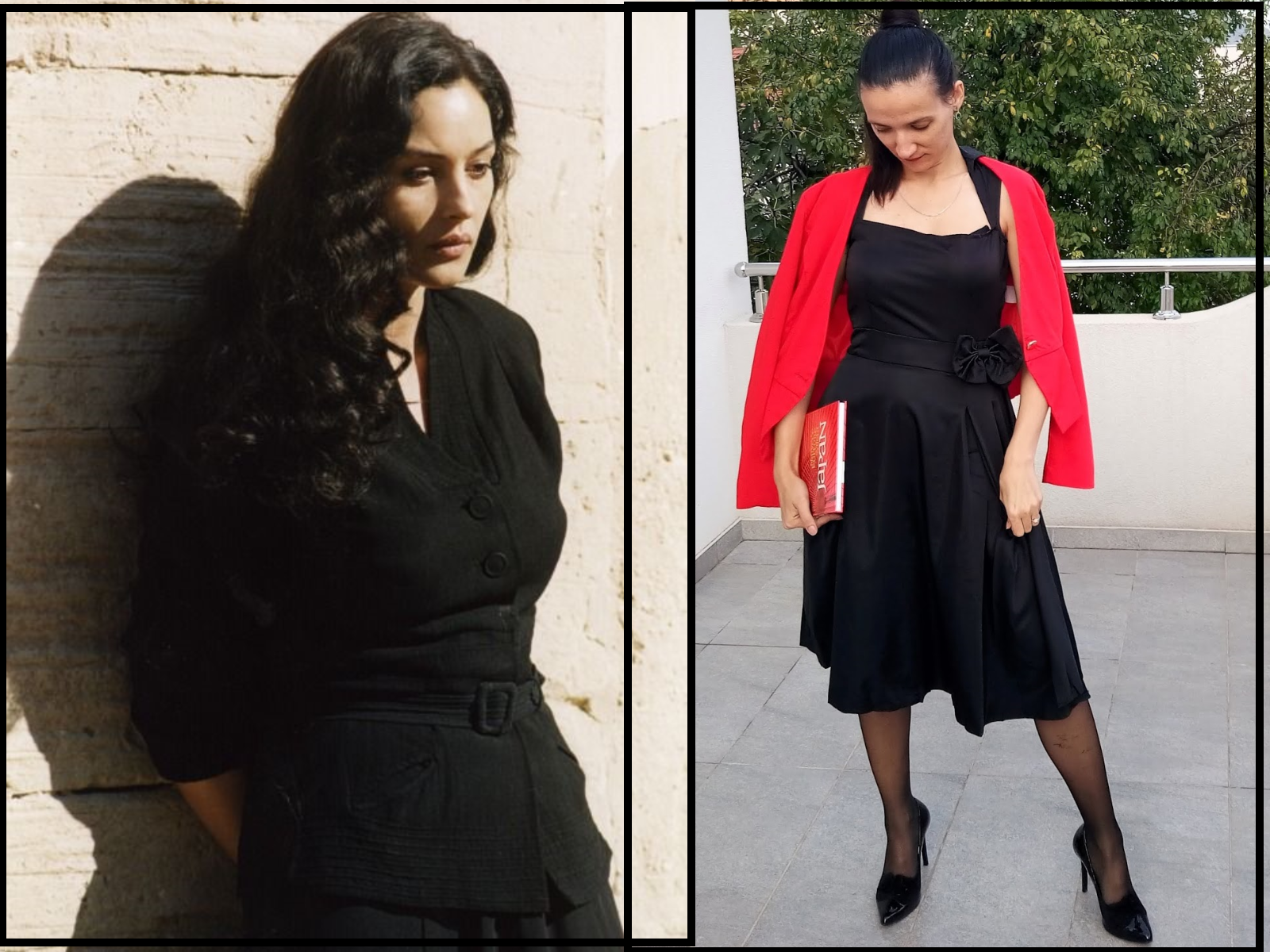 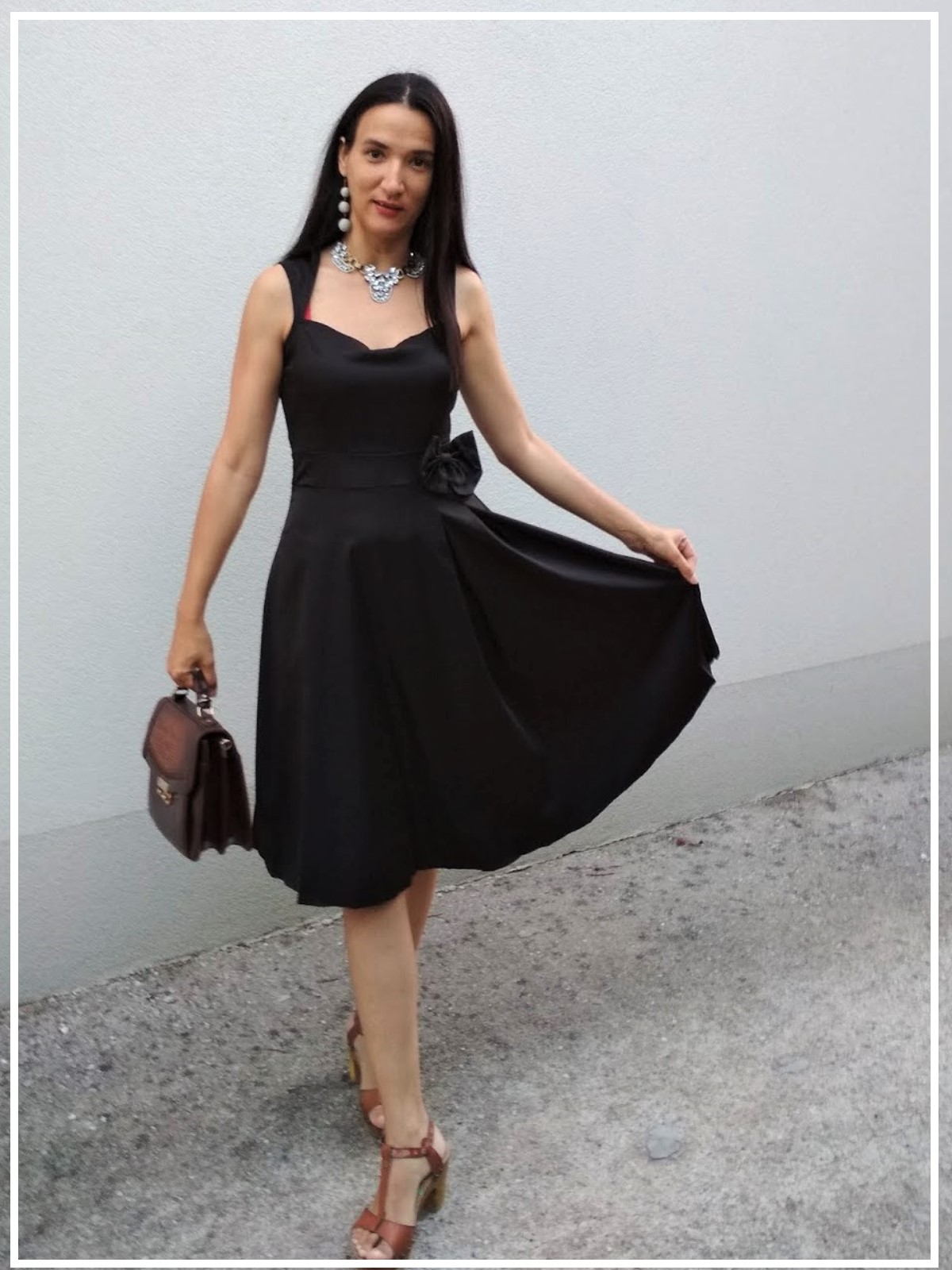 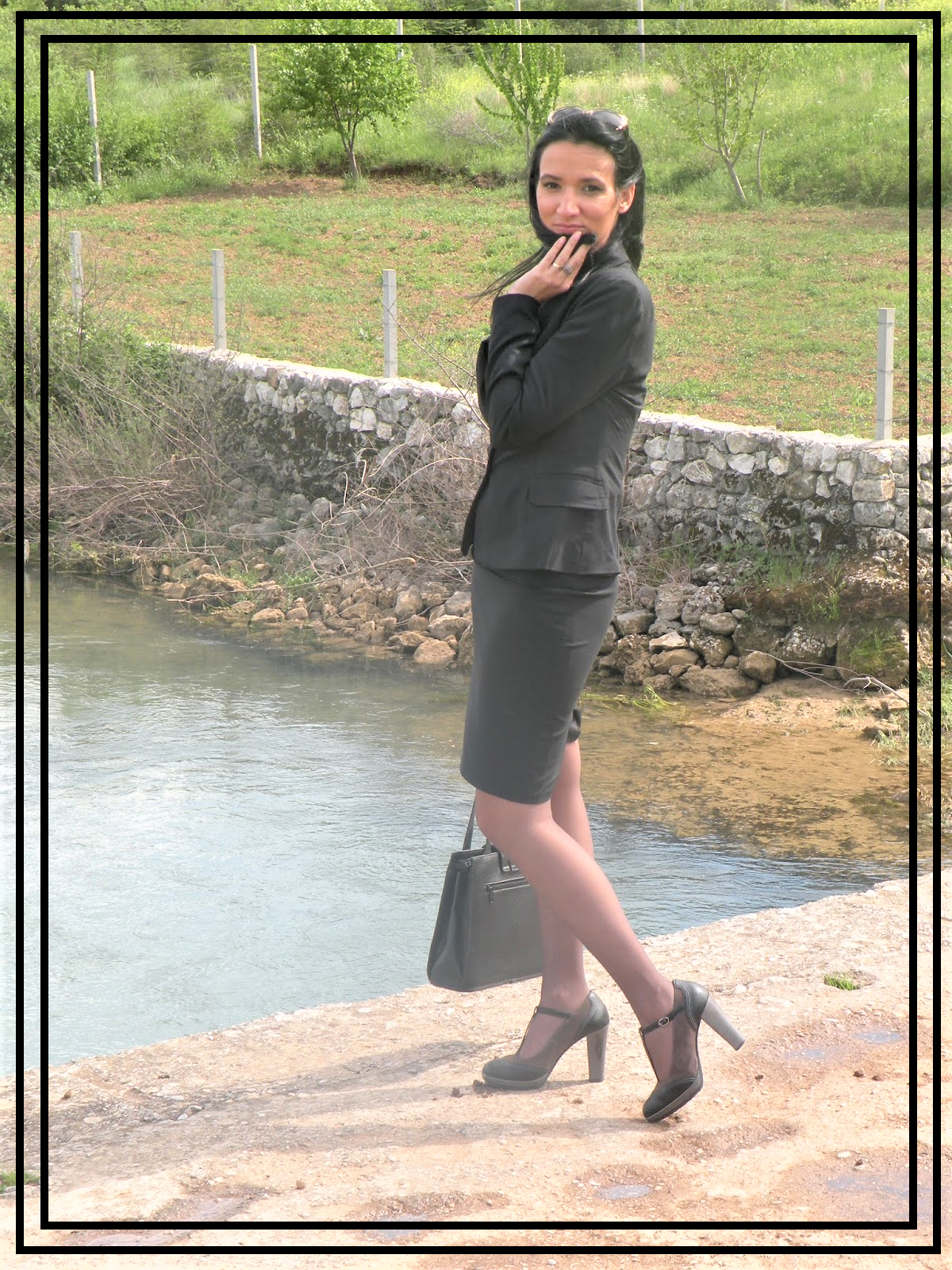 4. CREATE COLOUR CONTRASTS USING BASIC COLOURS (BLACK, NAVY AND WHITE)
Even though the colours that Malena wears are very basic, she knows how to make the most of them. She often contrast white with black or navy blue. Moreover, she will often wear a monochromatic look, for an example an all white look with black details or the way around. Whether it comes to accents or outfits, Malena knows how to make the most out of colour contrasts. 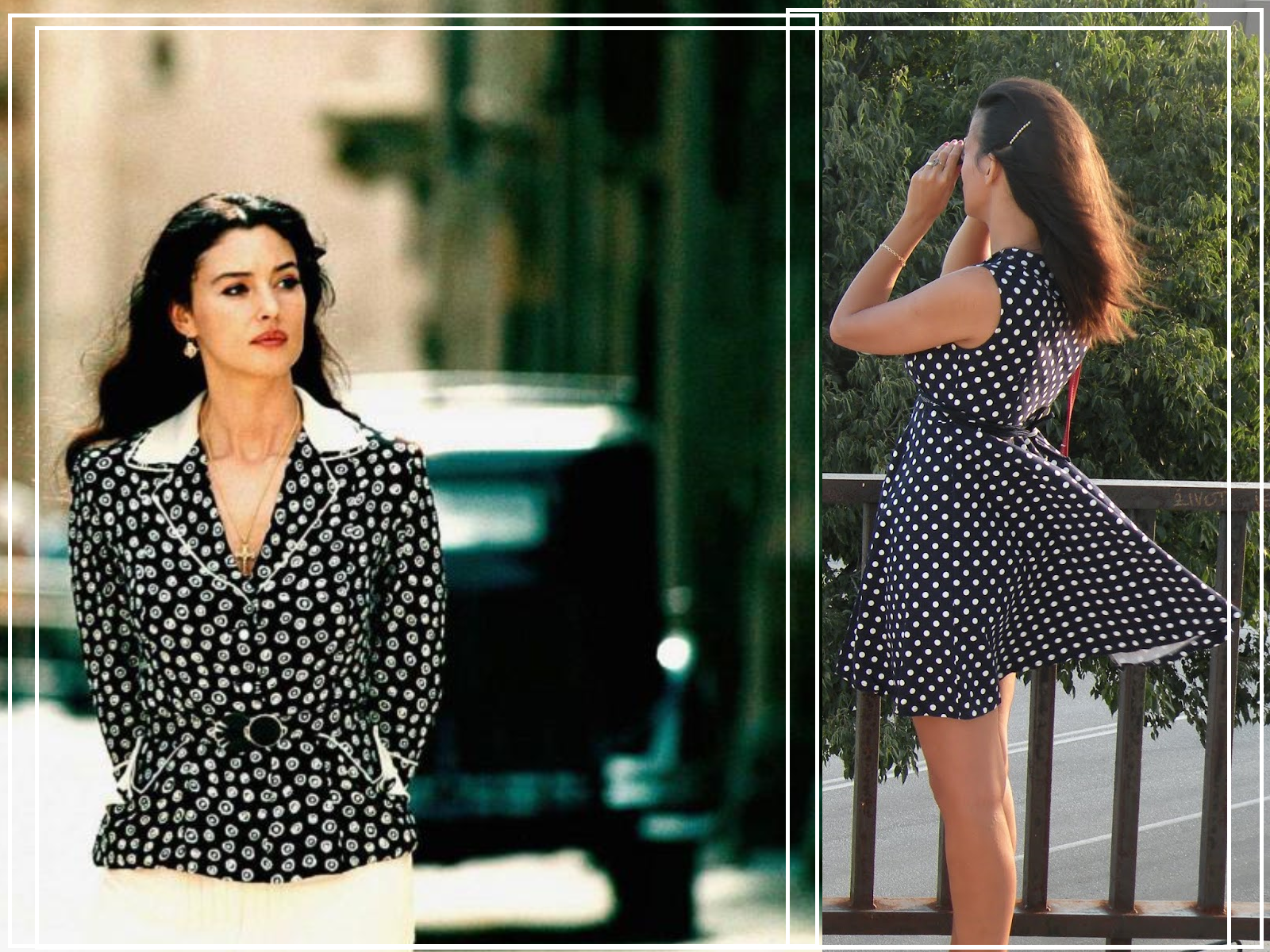 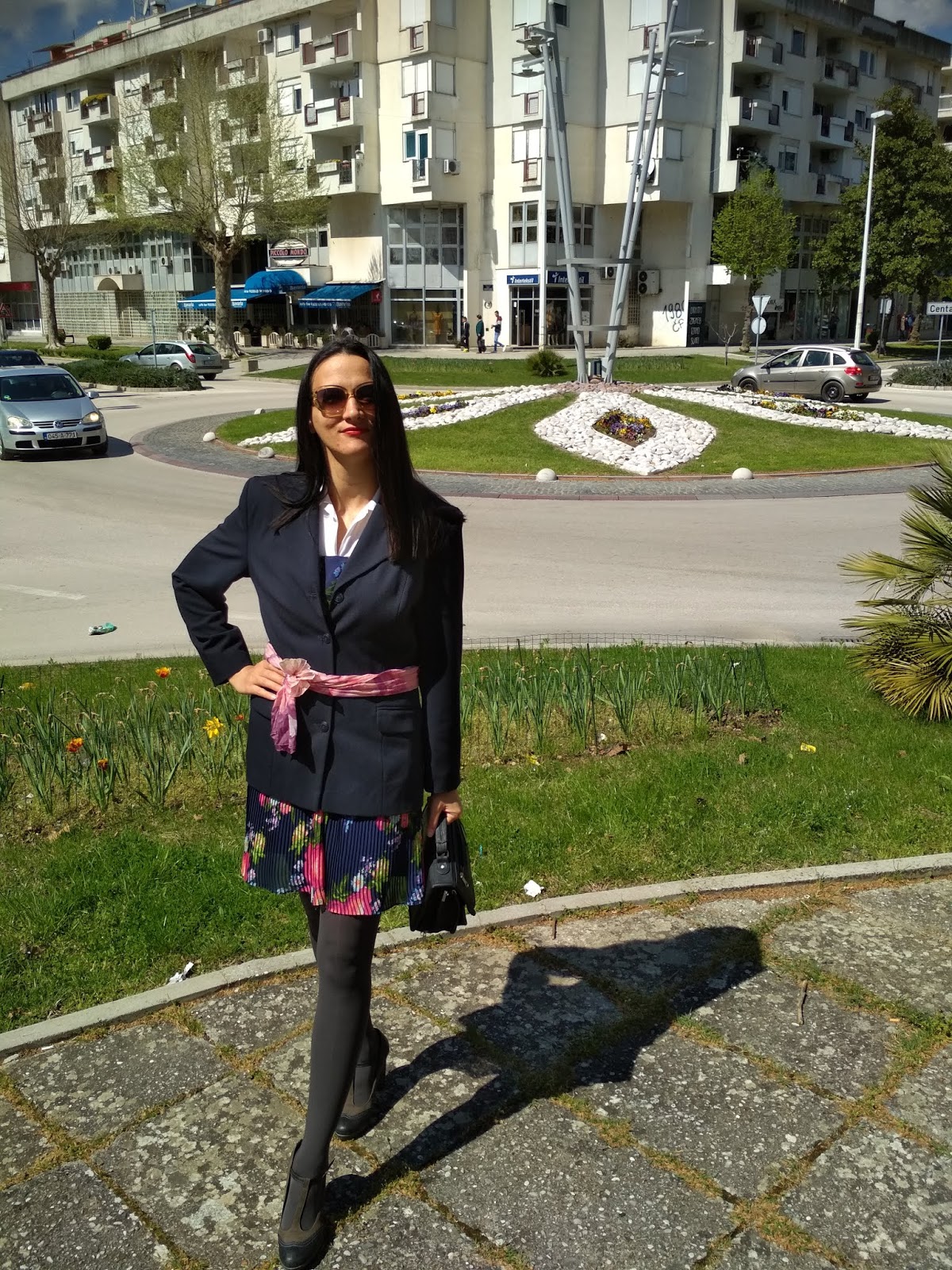 5.WEAR CLASSICAL PRINTS (FLOWER AND POLKA DOT PRINT)
Malena's style is very classical and timeless. It is no surprise that she opts for classical prints. When she is not contrasting basic colours to create a timeless outfit, she is wearing prints like it's nobody's business. What is more classical than a floral dress? Malena likes to wear floral and polka dot prints. If you want to imitate her style, you can opt for a nice classical floral print dress. If you want to be a bit more bold, you can choose a vibrant print instead of a neutral one(like I did in the outfit you can see bellow). 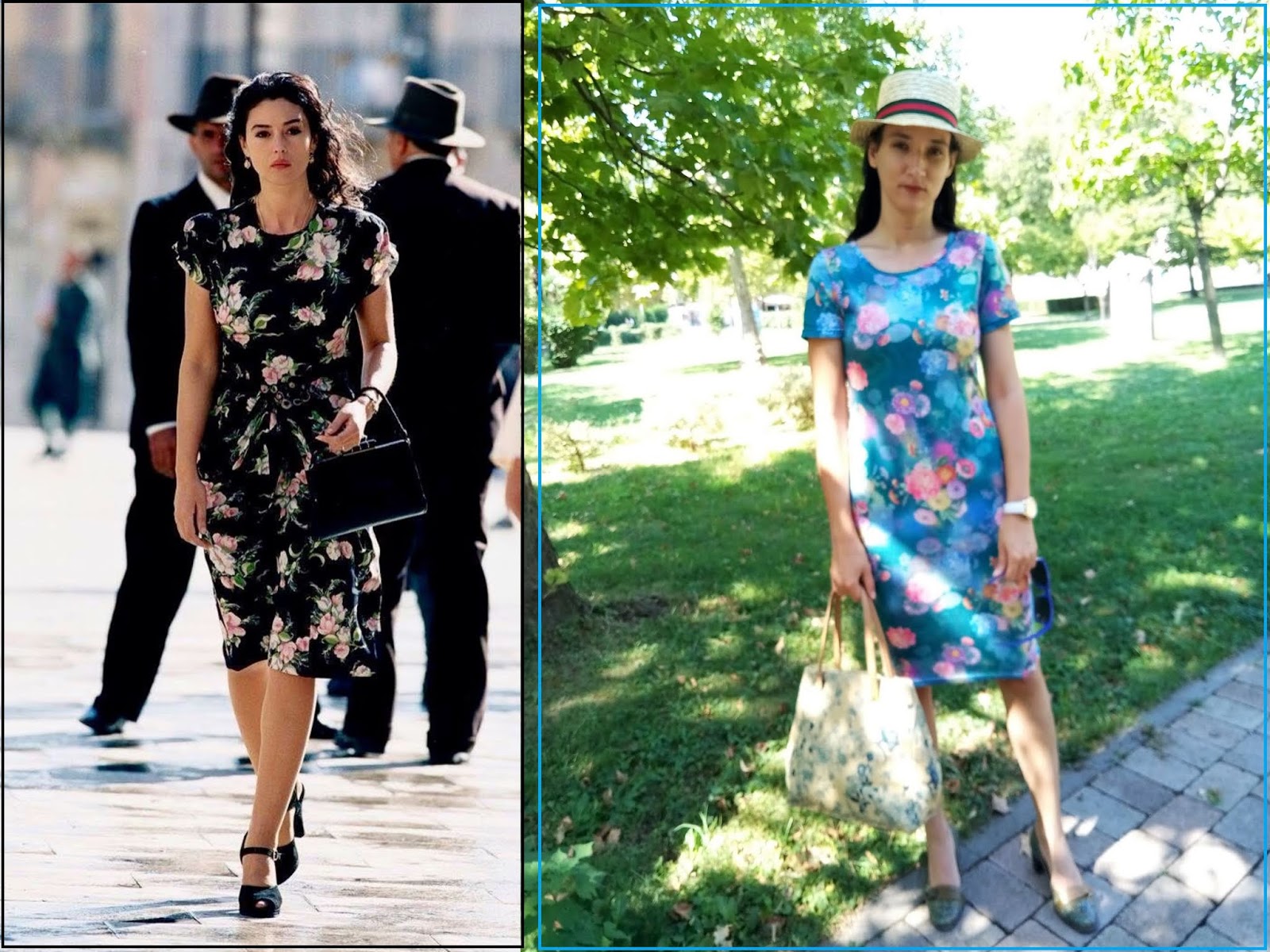 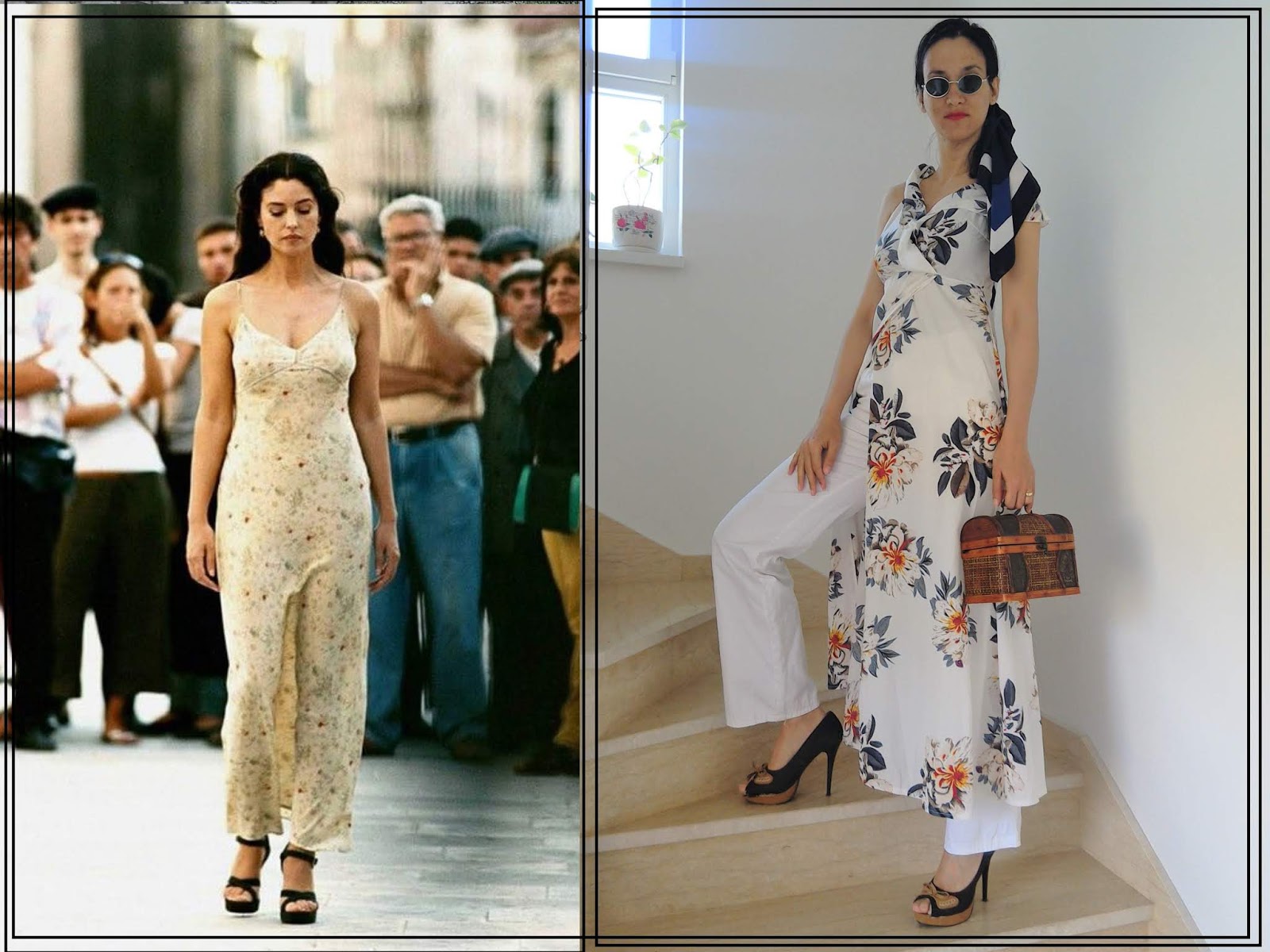 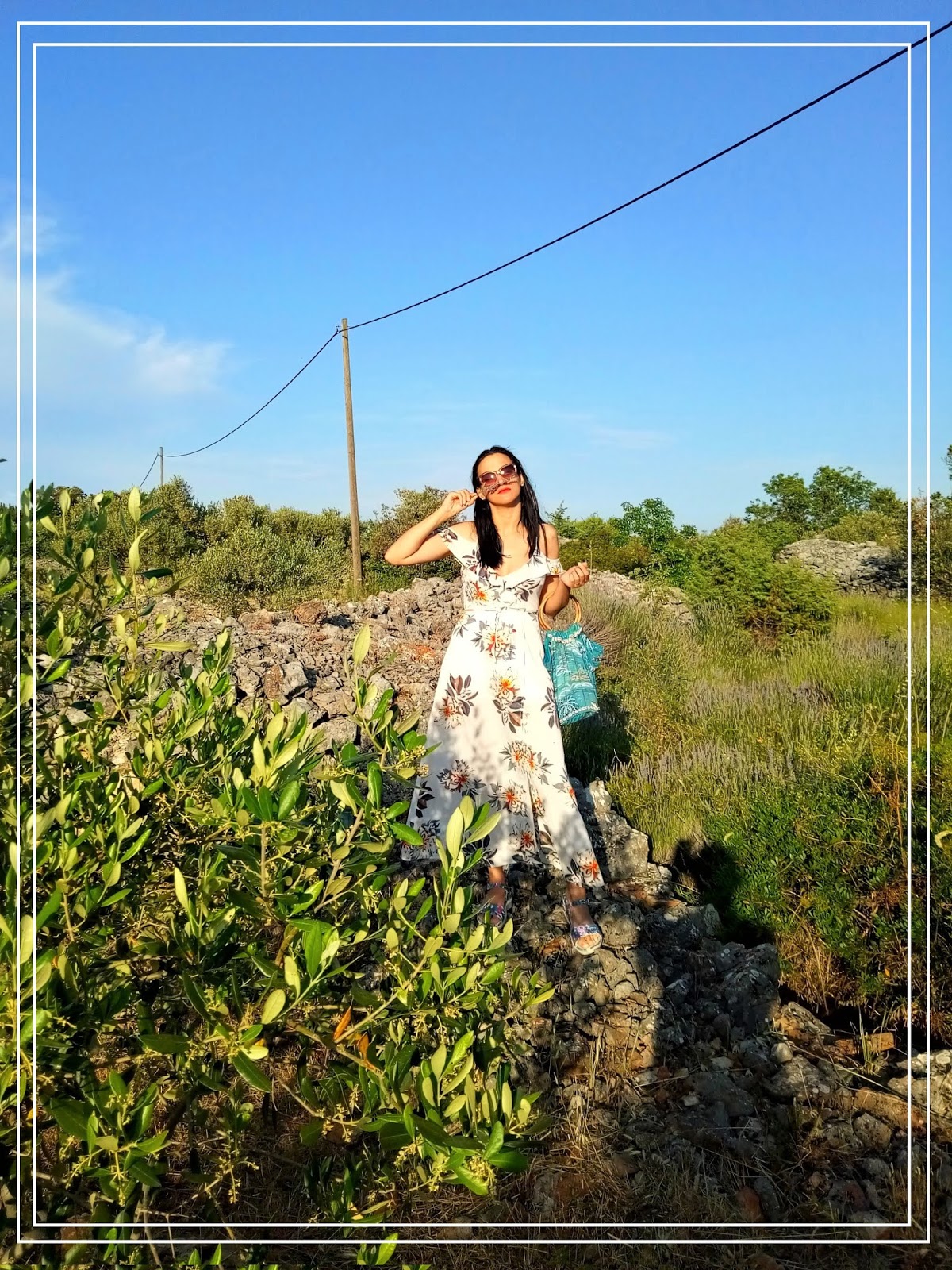 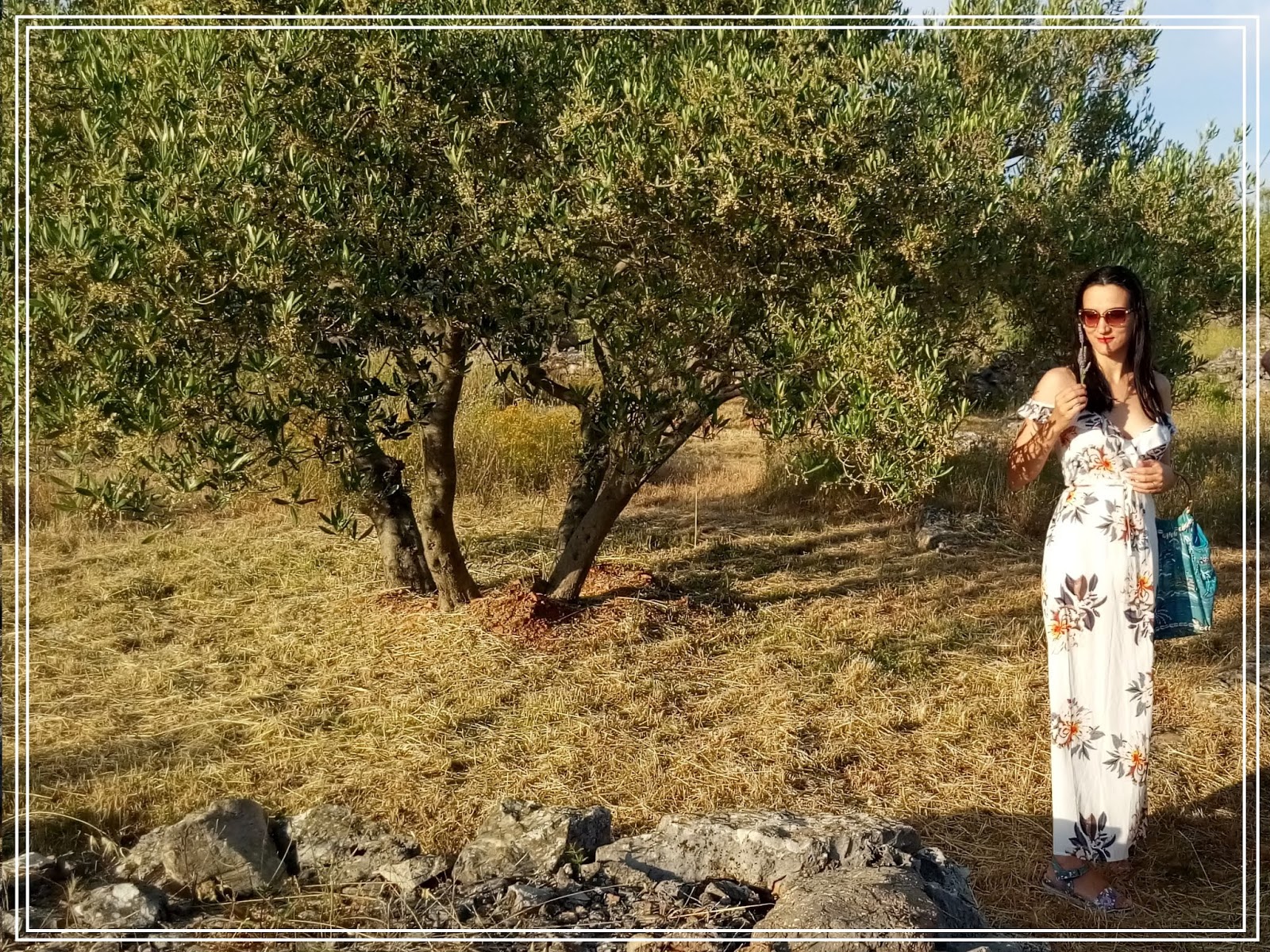 Malena/Monica Bellucci often opts for classical and timeless cuts. She wears classically cut blazers and blouses, pairing them with pencil skirts and chic accessories. Everything about her style feels timeless. Indeed, this historical film is a great place to look for vintage style outfits to get inspiration from. Malena's outfits are the kind of classic lady like combos that will never go out of style. 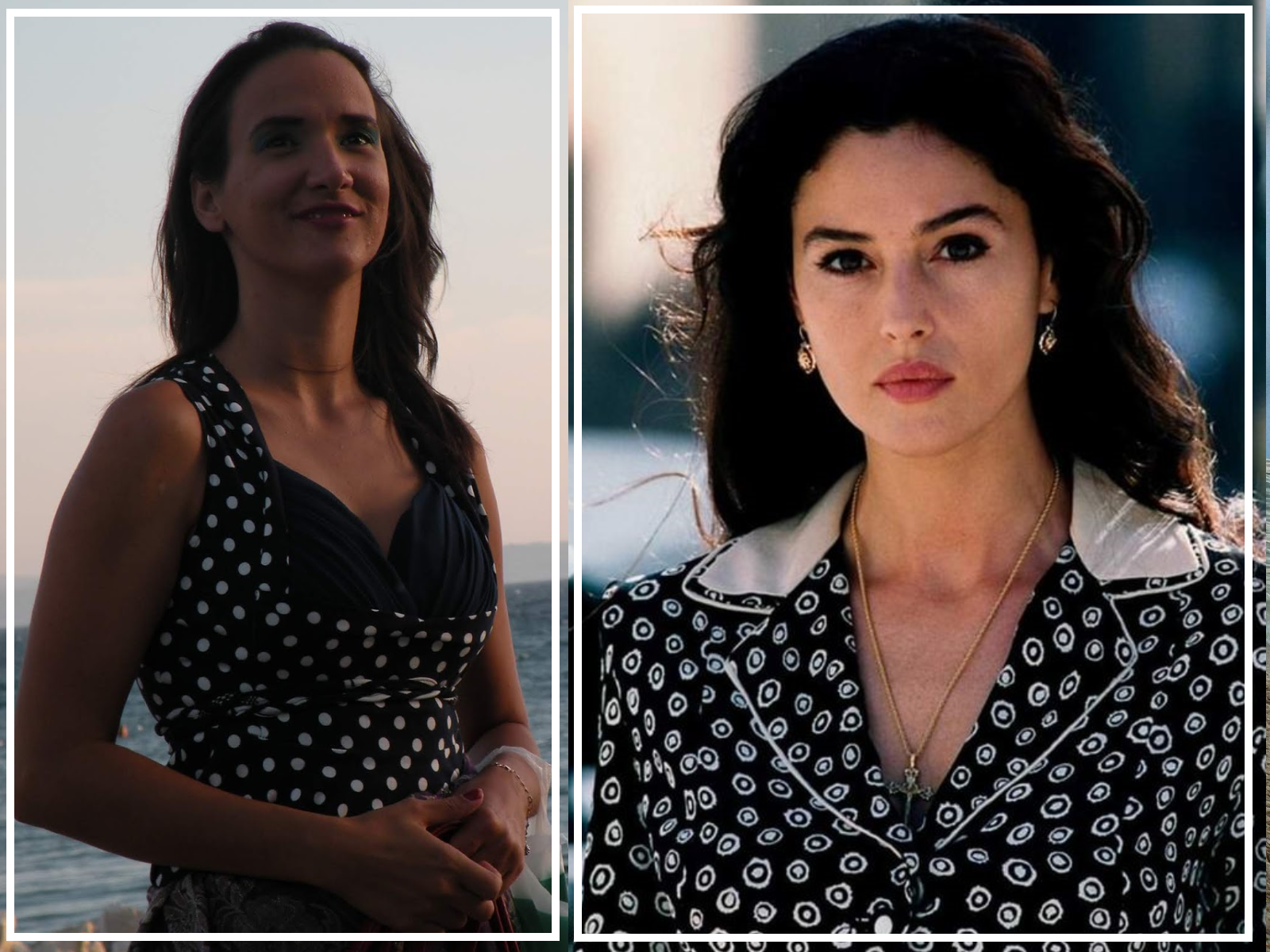 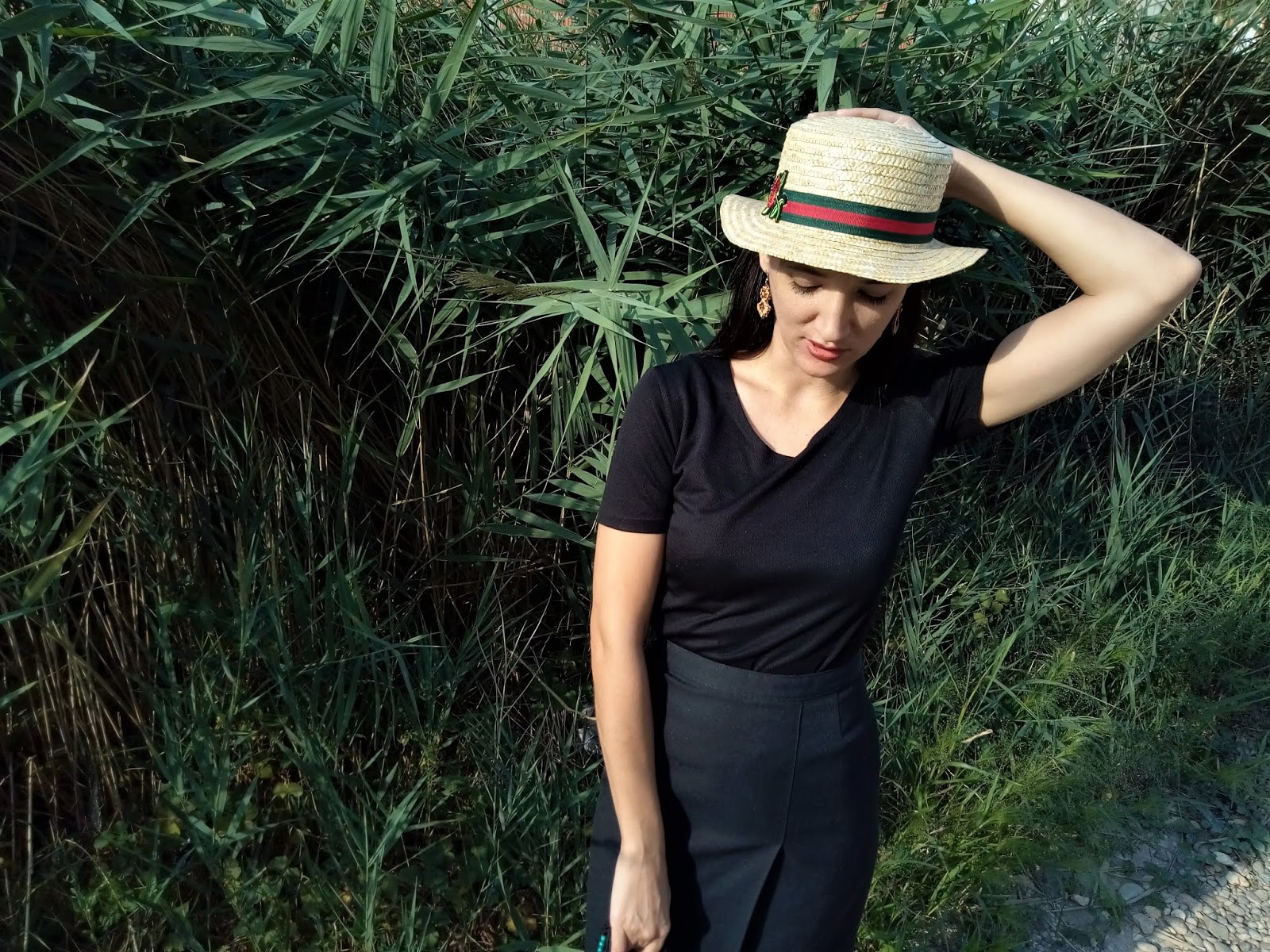 7. HEELED SANDALS ARE A GIRL'S BEST FRIEND
If you pay attention to Malena's outfits, you'll notice that she always wears heels. Heeled sandals are the perfect finishing touch to her summer outfits. The heels she wears make her look even taller and that is important because Monica plays a character that stands out. Her tragic beauty metaphorically elevates Malena (in the film) and heels play a part in that. Therefore,  another important component of Malena's style are the heeled sandals. Malena always opts for basic black and white ones to complement the colours she wears most often: white and black. 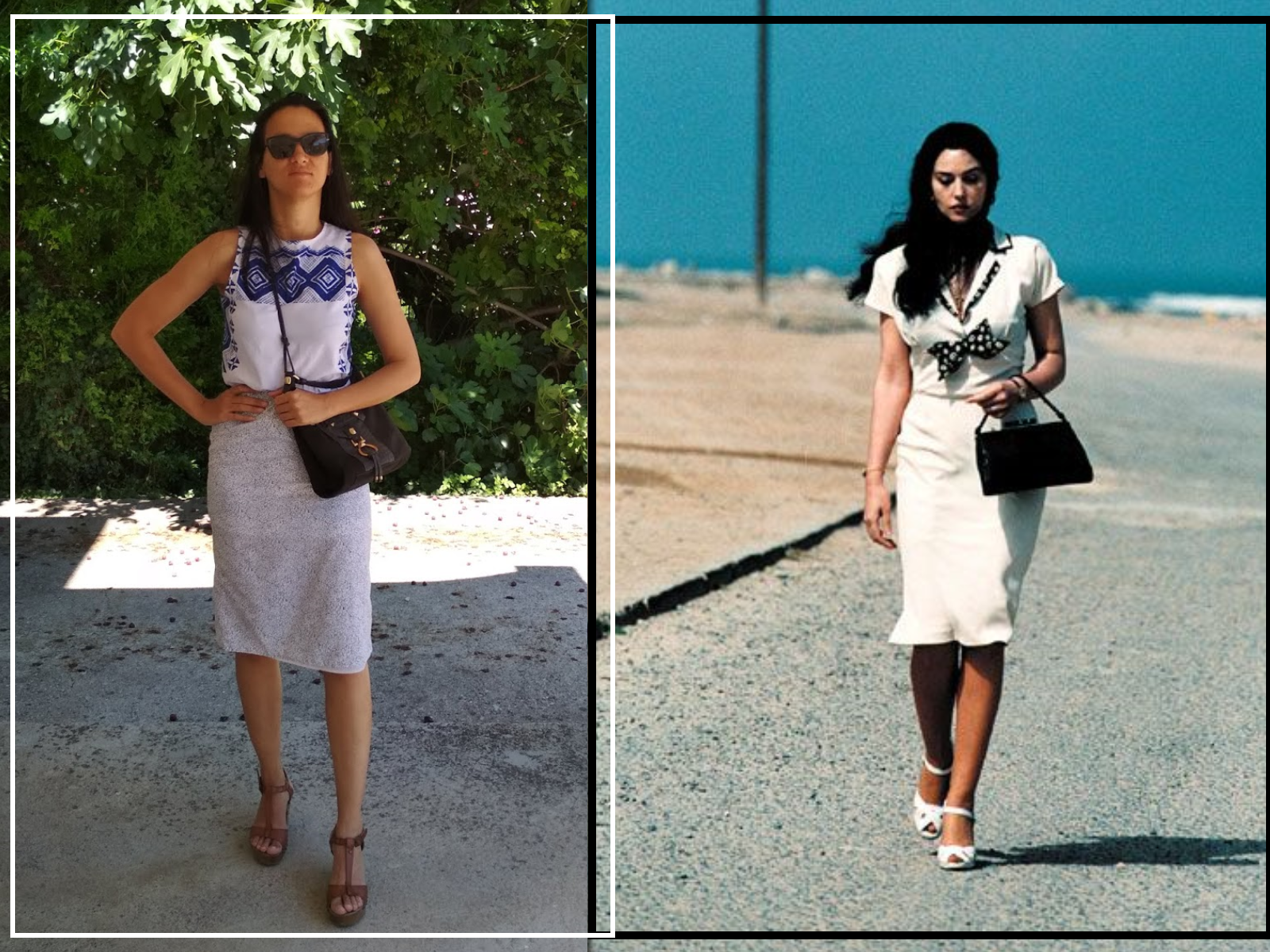 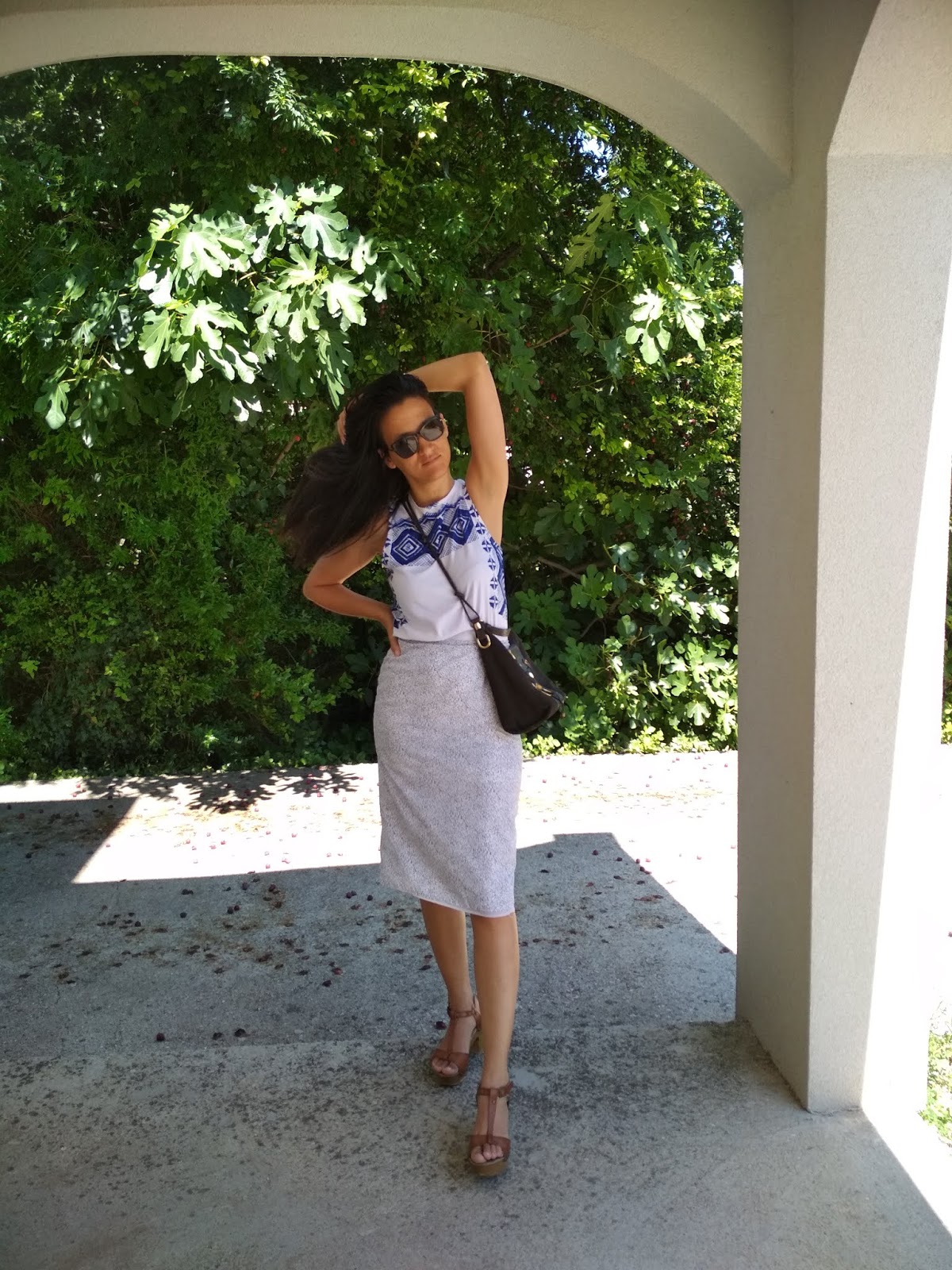 8. FEMININE DETAILS MAKE ALL THE DIFFERENCE (SAY YES TO BOWS)
Another important element of Malena/ Monica Bellucci's style are feminine details. If you observe her outfits in the film, you will notice that Malena often rocks bows or similar feminine details. She expresses her femininity with elegant outfits that stand out in their simplicity. Malena's bags are always very chic and they do a great job of elevating her outfits. Malena doesn't wear many accessories, but when she wears jewellery, it is always in the perfect balance with her outfit. As with colours, when it comes to accessories, Malena believes in less is more philosophy. 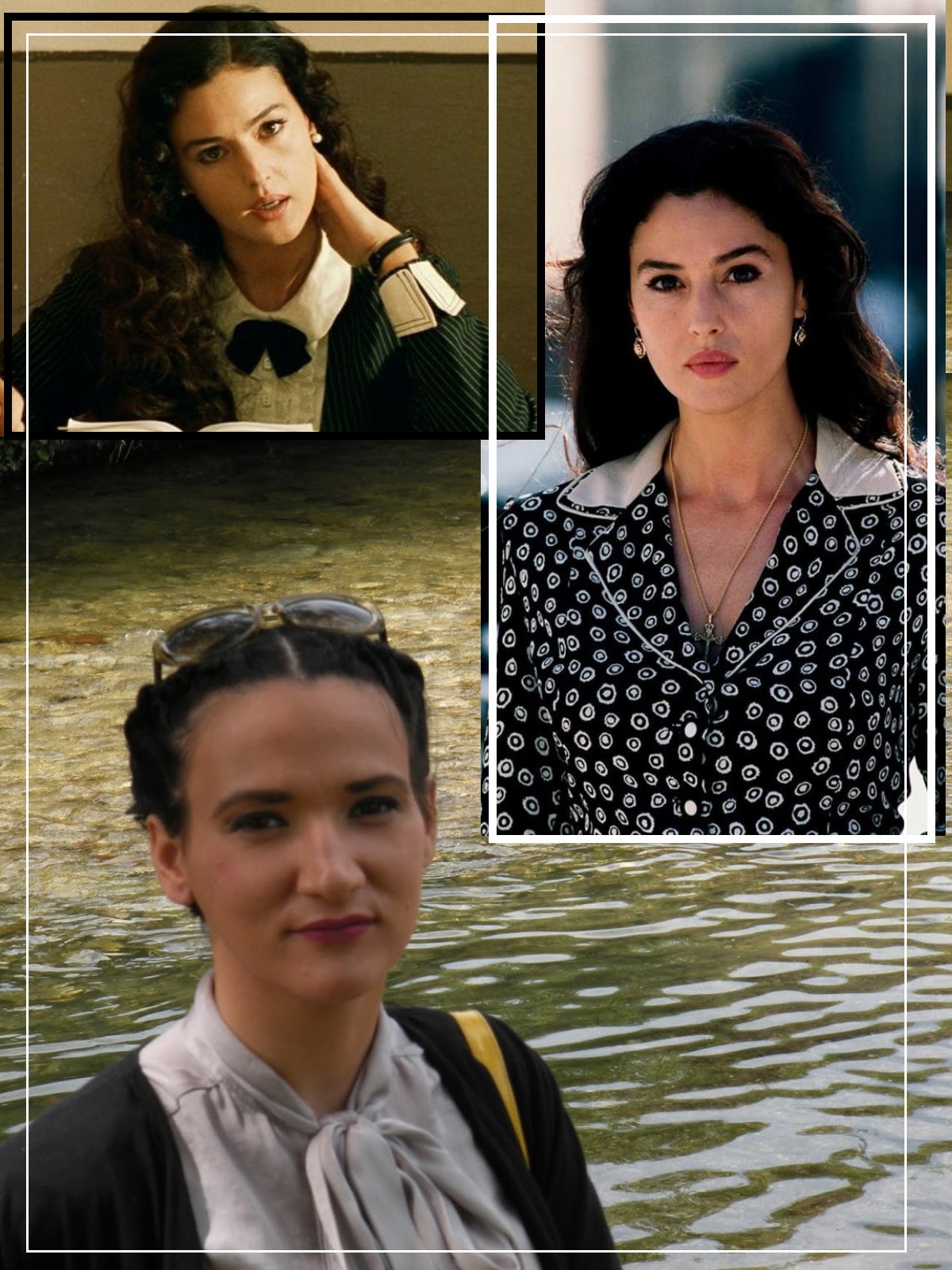 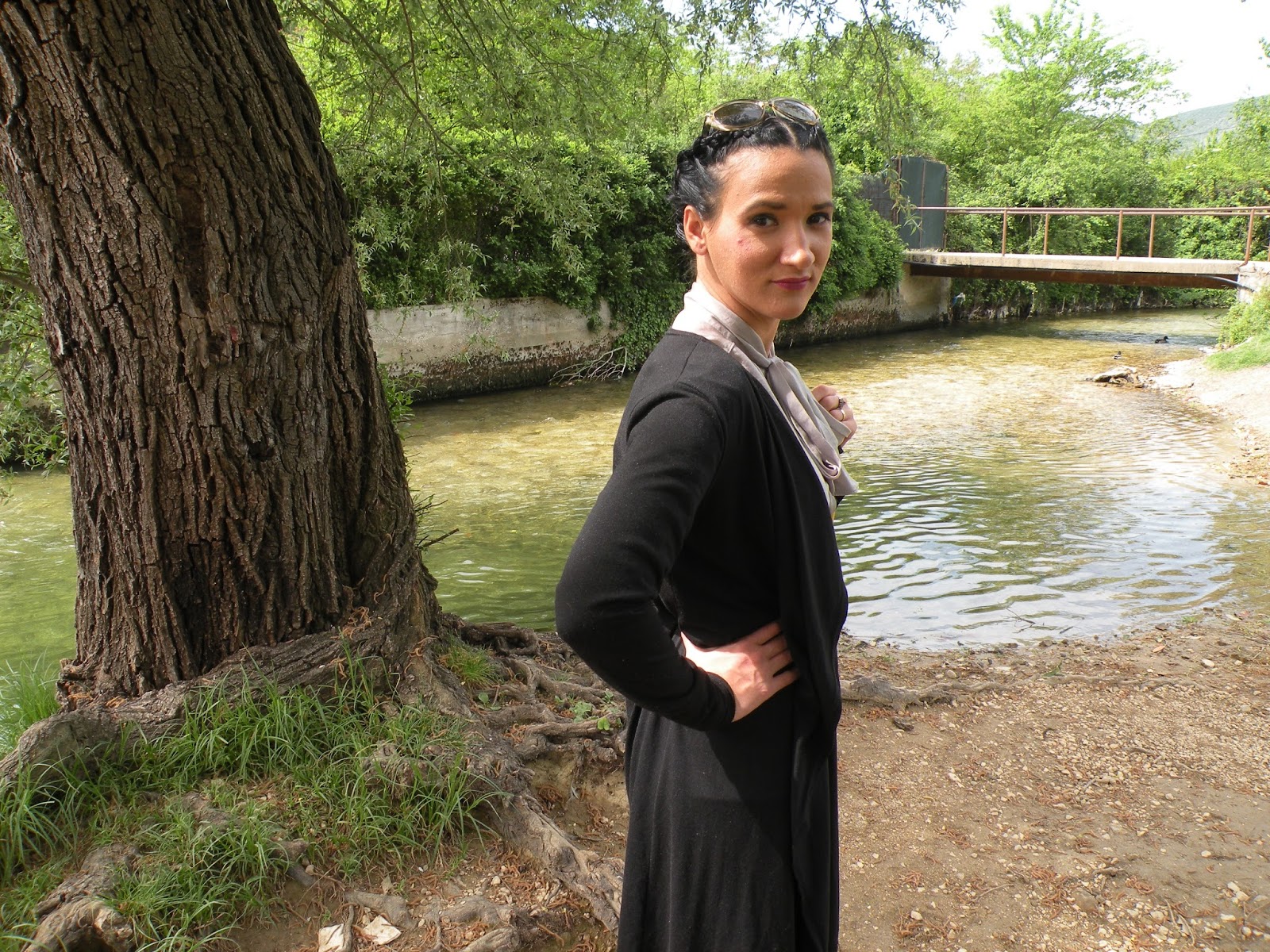 9. BELT IT! ALWAYS WEAR A BELT
Malena knows the importance of accentuating one's figure by focusing on the most narrow part of her body- the waist. Malena knows that to belt it is to win it. That is why she will always wear a belt (both with dresses and skirts!). Her fashion rule is simple: always wear a belt. The belts that Malena chooses are always simple and they don't contrast with the rest of the outfit. 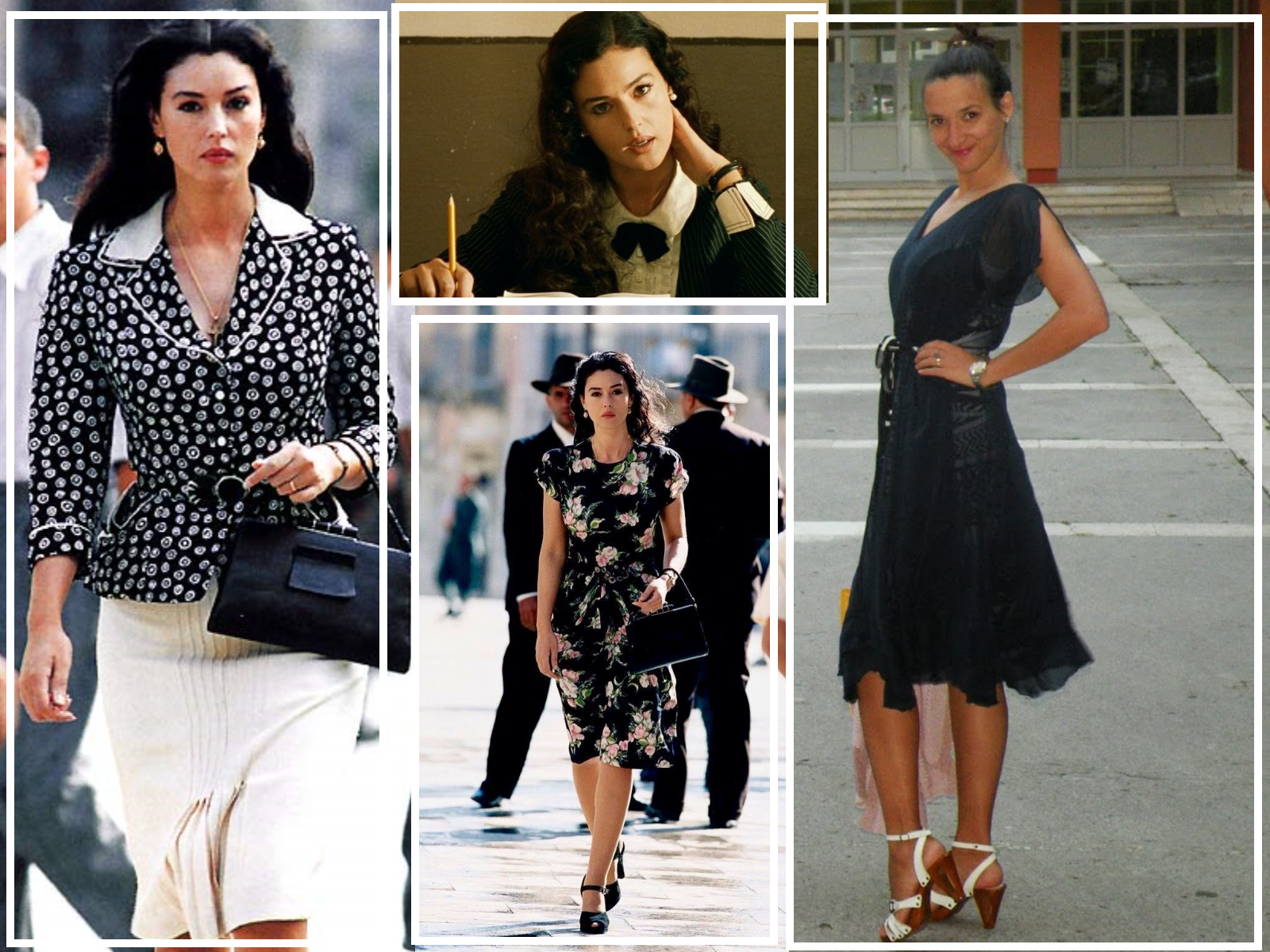 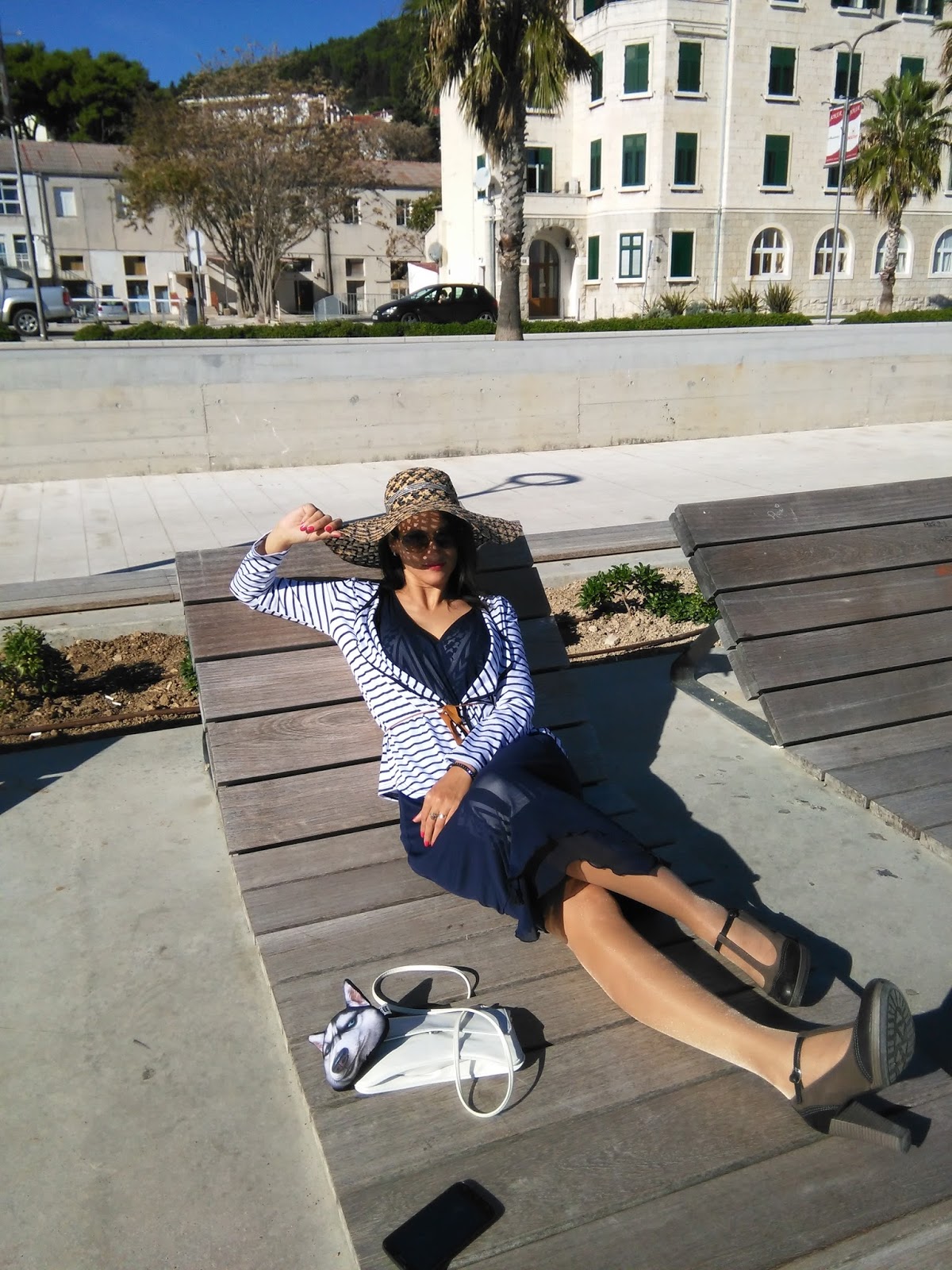 10. GO FOR SIMPLE AND CLASSICAL MAKE UP LOOK AND HAIRDO
When it comes to make up and hairdo, Malena likes to play it simple. Malena doesn't wear much make up and she stays away from crazy colours. No experimentation with unusual eye-shadow or lipstick colours. A classical red lip is allowed, though. The make up that Monica Bellucci wears in this film is very typical of the 1940-ties, but it is a bit downplayed.  The focus in this film is clearly on Monica's natural beauty so too much make up would only get in the way. In the film, Malena wears her hair let down. Her long hair attributes to her feminine allure and adds to her beauty. Pay attention to what happens when she eventually cuts her hair by the end of the film. There is a great metaphorical message in that, I'd say. 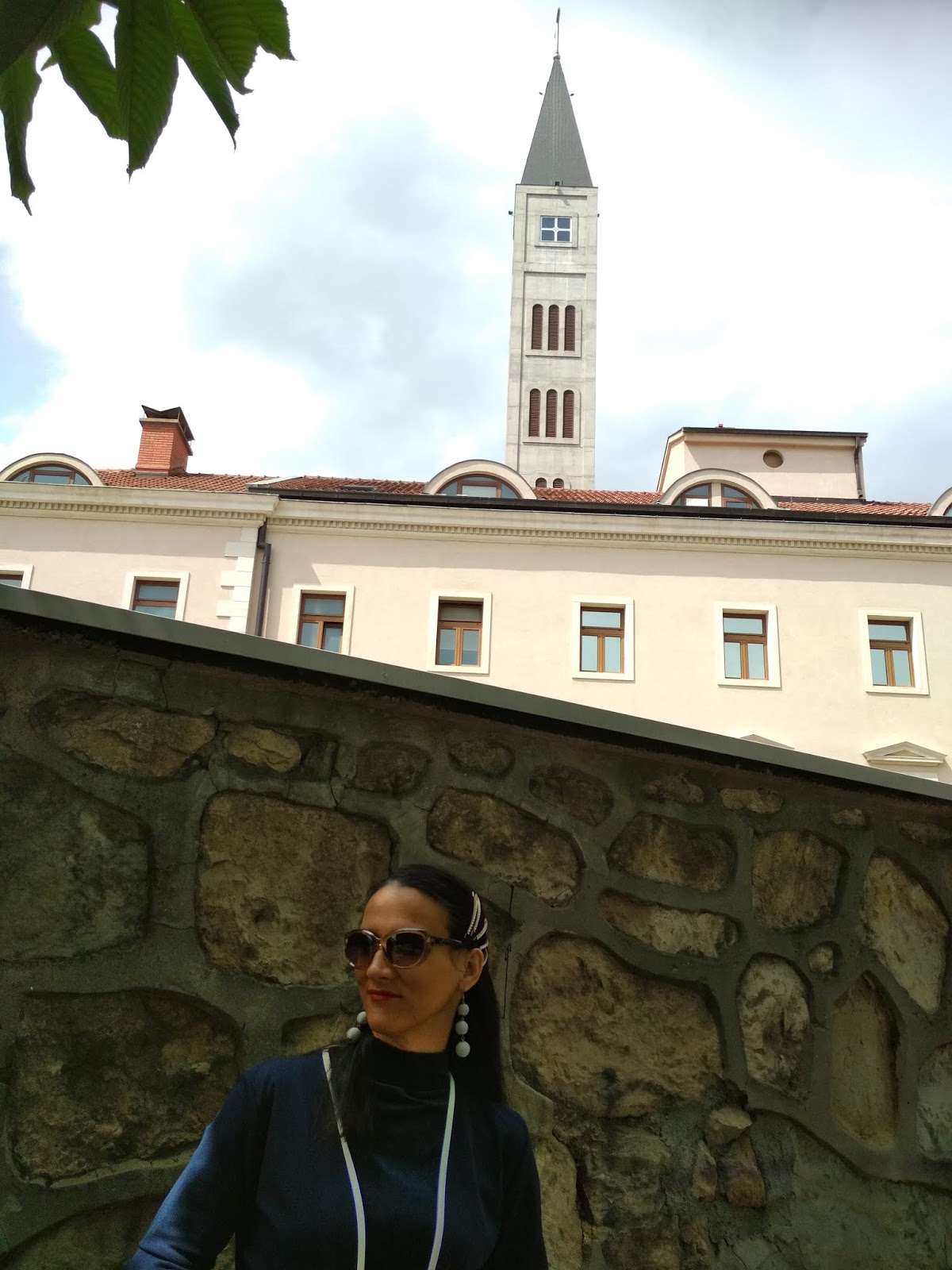 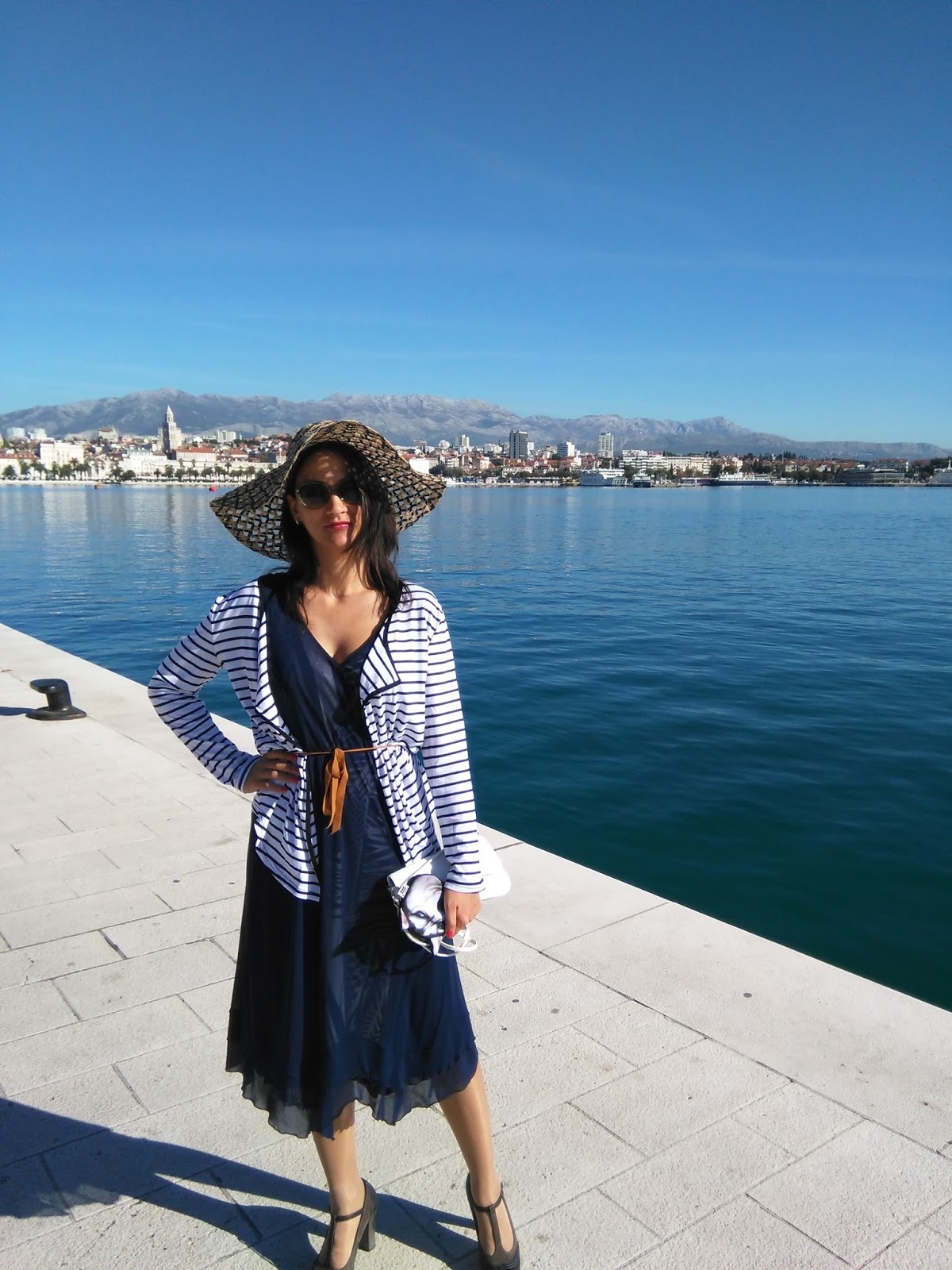 I hope you have enjoyed this Malena/Monica Bellucci inspired post. Did I do a good job of hacking her style secrets? Would you follow these fashion rules? Do you think Monica Belluci is a good style inspiration? Let me know in the comments. Until next time, thank you for reading.

February 18, 2020
Hello dear readers and/or fellow bloggers. Today I'm back with the part two of my visit to Hvar city. Today I'll show you a bit more of this city. This time I'm taking you a bit further away, to fully explore the beautiful promenade this town has to offer. If you take a close look, you'll be able to spot all the historical attractions, such as the fortress of Hvar, the city cathedral and so on in the background. The walking areas on both sides of the city are simply stunning, with lots of tropic and Mediterranean greenery among which you will notice palm trees, giant agava plants and cacti.  How's life treating you? I've been feeling under the weather. I have a nasty throat infection (hard thing to recover from when you talk for a living) and I've been down with fever for the last few days but I haven't missed a single day at work because this is such a busy period for me and I don't see how I can take any days off. I'm drinking ginger tea by t…
53 comments
Read more

February 21, 2020
It has been a while since my last reading update, hasn't it? I love writing book reviews and you seem to like reading them so I'm back with a new reading update. Today I'll share book reviews for three very different novels with you. The first one is a science fiction novel written by two North American writers. This novel doesn't take itself too seriously and is a fun read. The second book recommendation is a bestseller: an emotional novel  by an Afghan-American writer and doctor.  The third novel I reviewed a dark comedy novel by a Finish author. I'm also going to show you a few ways to wear a cherry print dress in winter. Scroll down to see and read more!


IF AT FAUST YOU DON'T SUCCEED BY ROGER ZELANZY AND ROBERT SHECKLEY 4/5 If at Faust You Don't Succeed is a religious satire of sorts, so it might be offensive to some who are easily offended. That being said, I think it's a great novel. I do like how Roger can make fun of religious concepts but at the …
32 comments
Read more

VISIT BAY PRAPATNA ON ISLAND HVAR WITH ME!