June 29, 2020
Hello dear readers and fellow bloggers! How are you doing? To be honest, I'm not feeling that great.  Besides struggling with what feels like a never ending migraine, I'm also struggling with some personal issues and griefs. However, I did manage to prepare a fun post for you, so let's get into that. Recently I have had the chance to visit my hometown Split. Today I'll share with you a few sights that you might want to see. There probably won't be as many tourists in Split as last year, as I imagine most tourists will avoid cities and head over  to more serene places on Croatian Adriatic cost (I know for a fact that many private bays on island Hvar island are all booked for summer 2020!), but there will probably still be people visiting Split city. If you are one of them, here are some sights worth visiting in the old part of the city. 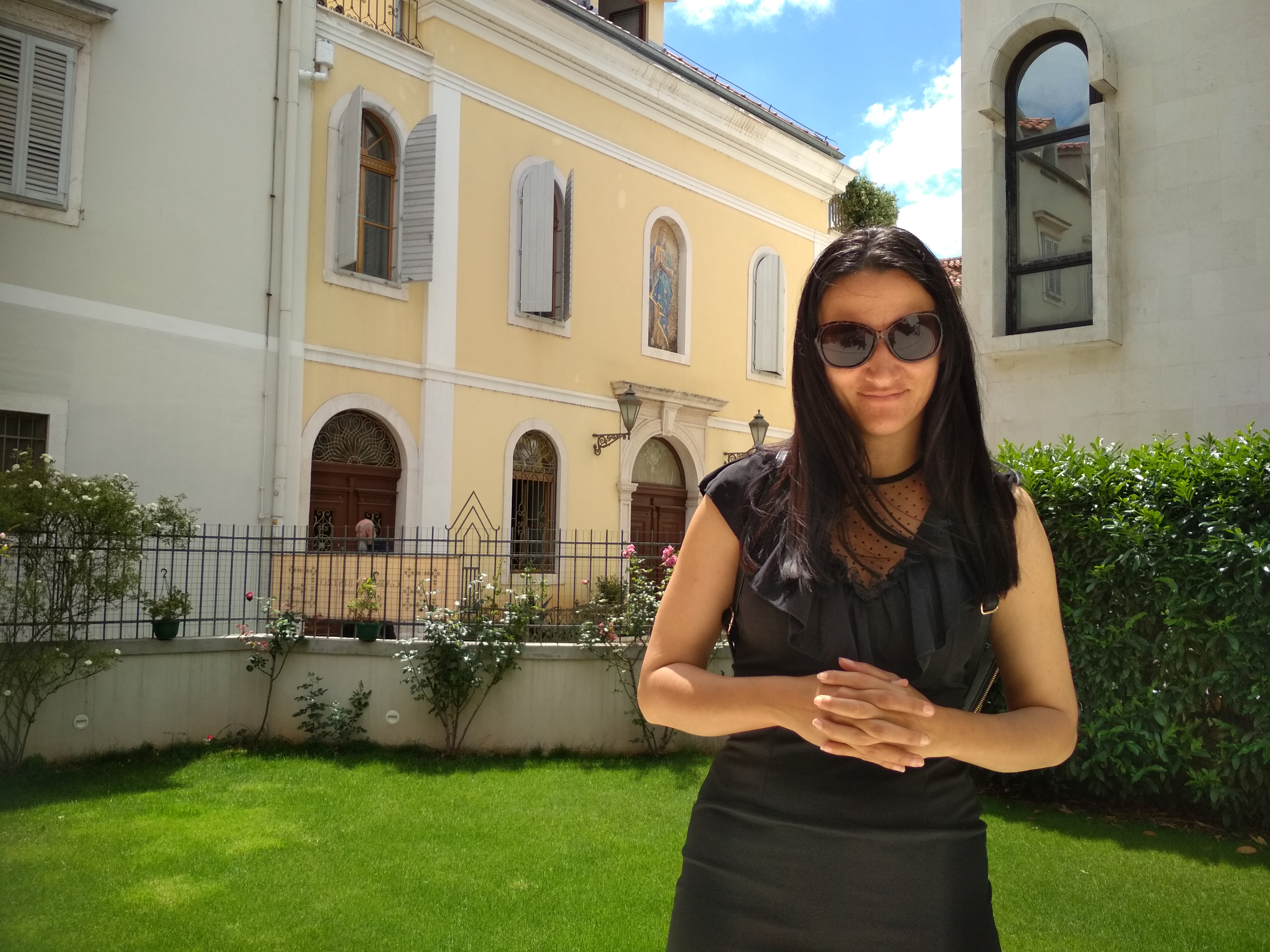 LET'S START WITH SIGHTS WITHIN THE ANCIENT WALLS OF DIOCLETIAN PALACE
Diocletian palace or in other words the old part of the Split city. One of the things that makes the historical centre of Split special is the fact that the 'old part of the city' is placed within preserved walls of a ancient palace. The walls are still standing and they are quite an impressive sight.  Diocletian's palace aka the old part of Split city was originally a summer palace build by a Roman emperor Diocletian, the only Roman emperor to ever willingly abdicate. All that so that the emperor could retire and live where present day Split city stands. Split started its life as a summer palace to a Roman Emperor. Well, it might be considered even older than that, as it was actually inhabited even before the ancient Romans set foot here and might be Greek in origin. Before the Greeks, there were other inhabitants and tribes.  Everything is ancient in these parts. 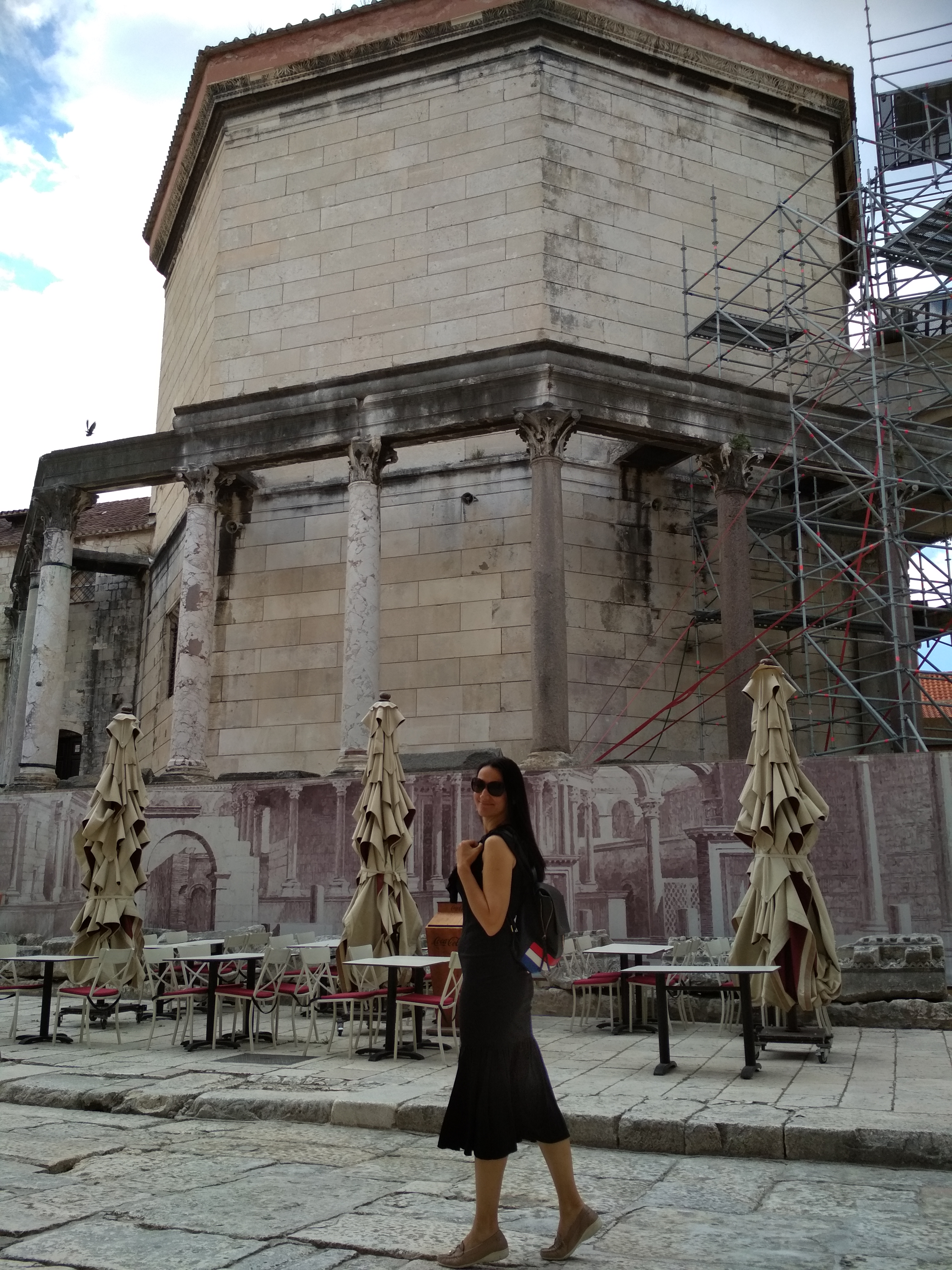 THE CATHEDRAL OF SAINT VIRGIN MARY (SAINT DOMINUS)
THE OLDEST CATHEDRAL 'TO BE PRESERVED IN ITS ORIGINAL FORM' IN THE WORLD
The oldest cathedral in the world to have been continuously used and still preserved in its original form is certainly a must see for history lovers. Funny thing is that this cathedral was originally a mausoleum of Diocletian  but early Christians had other ideas.  The patron saint Domnius was one of the martyrs supposedly killed by Diocletian, so maybe that is why they called the cathedral that. Strictly speaking, the church is devoted to the Virgin Mary and the tower to saint Domnius, but people tend to connect the both the cathedral and the bell tower with Saint Domnius.
THE BELL TOWER OF DOMNIUS CATHEDRAL
I already wrote in detail about the bell tower of Domnius cathedral. The cathedral is one of must see places in Split city. The Romanesque bell tower is obviously not as old as the cathedral, for the cathedral is truly ancient (the oldest christian cathedral to fully preserve its original form in the world). However, the bell tower of saint Domnius is a historical sight on its own. The bell tower is in many ways, a masterpiece of medieval architecture. Build in 1100 AD in Romanesque style, the cathedral saw some changes over the years but it has retained its beauty. Today this bell tower is one of Split city's most iconic symbols. 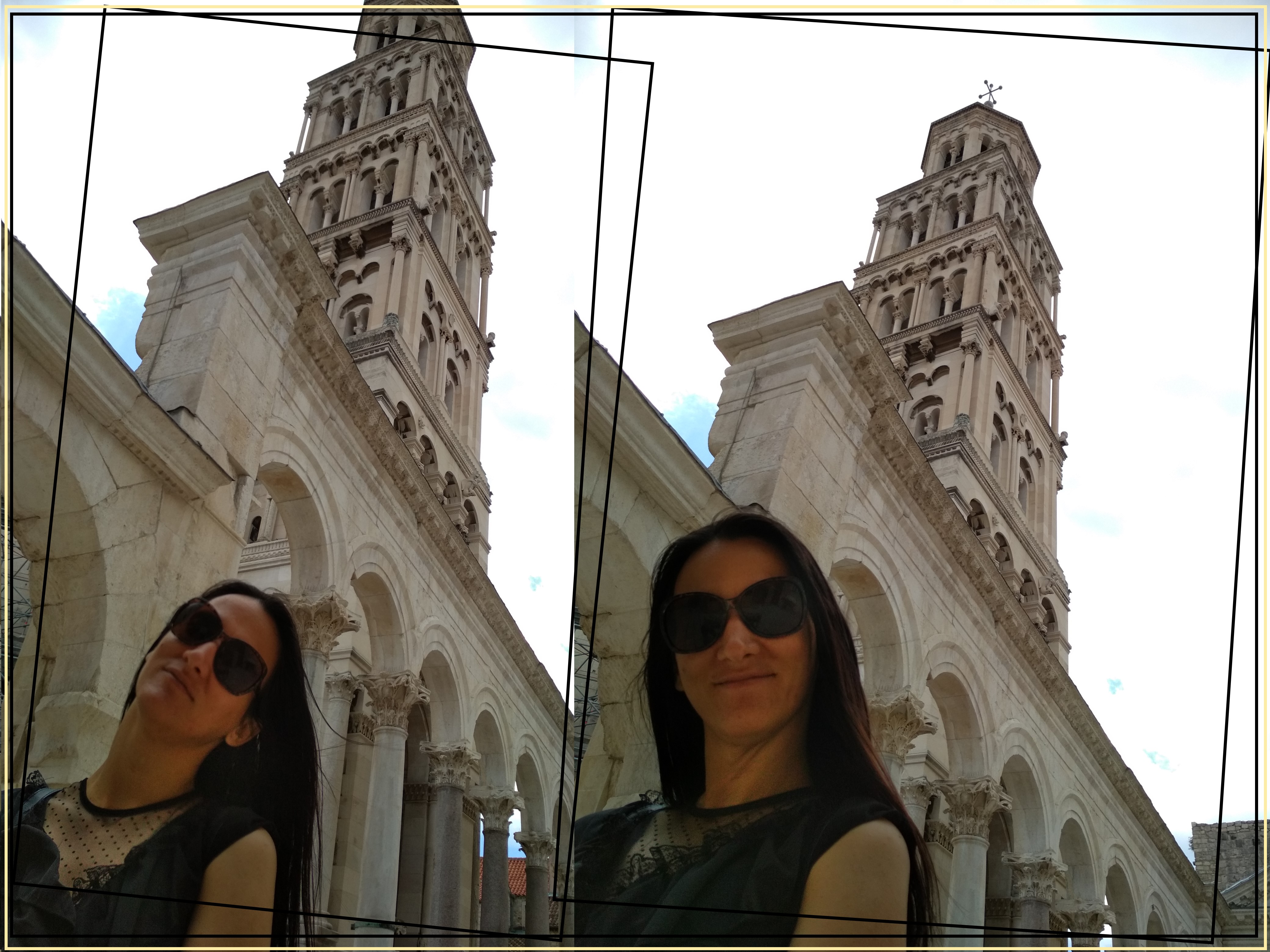 PERISTYLE- AN ANCIENT CENTRE OF CITY LIFEThe main square of Roman times is STILL the centre of city life. Peristyle is located immediately next to the cathedral that as I explained started its long life as a mausoleum of emperor Diocletian.  That makes perfect sense, if you think about it. The purpose of the square was to be the centre of social and religious life. This is where the emperor Diocletian would appear before his folk to be celebrated as the living son of Jupiter. Today there are actors who play the part of Diocletian and appear before the people in a symbolic act of celebrating the city's history. Moreover, because of its natural acoustics and the fact that is absolutely gorgeous, Peristyle often serves as a summer theater in the open. 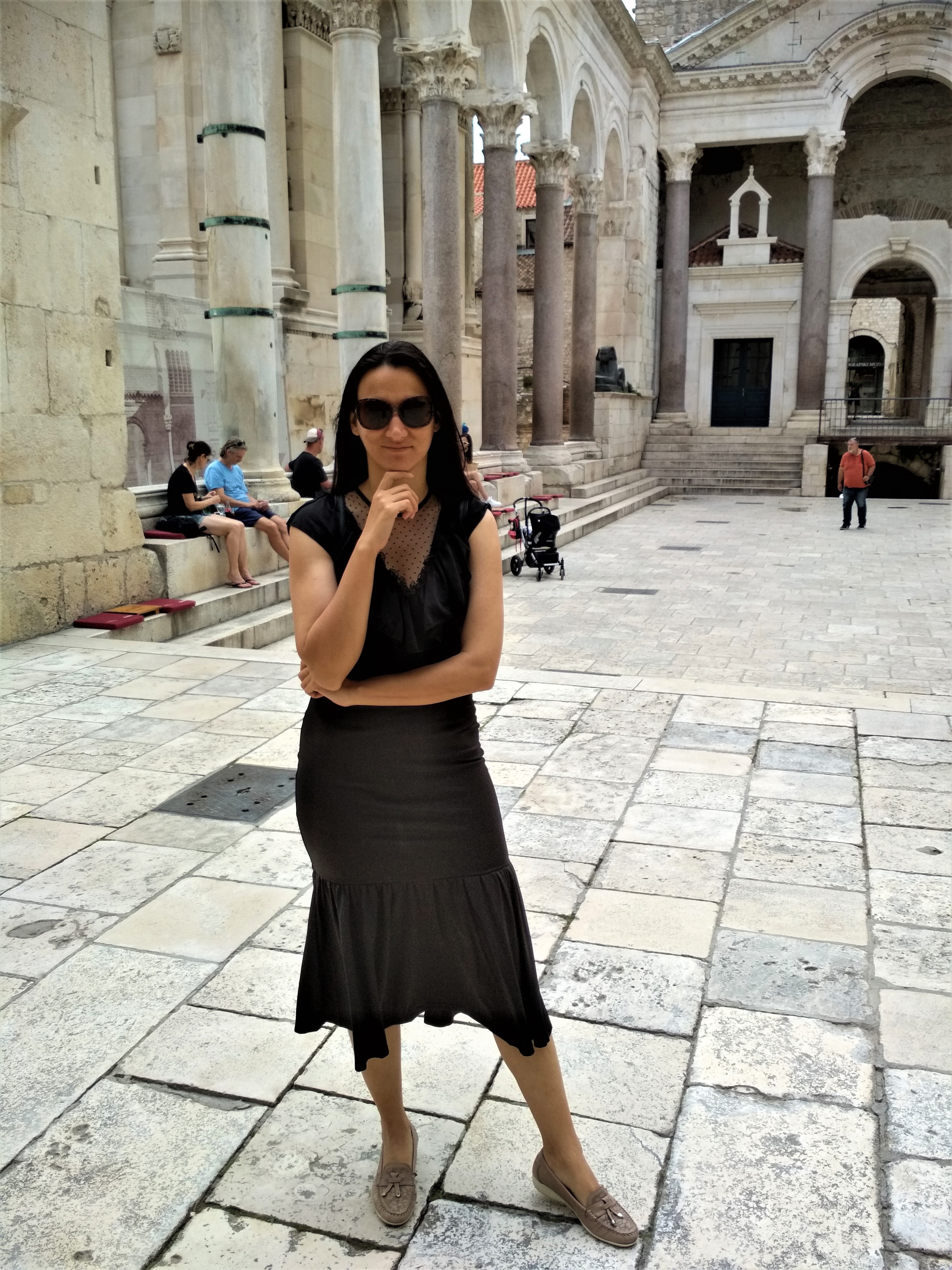 FOUR GATES: IRON, GOLD, SILVER AND COPPER GATES
What I wouldn't give to be able to travel in past and see these ancient doors with my own eyes. Their remains are nothing short of magnificent and I cannot help wondering how impressive they must have looked like in their own time. The old historical city, the so called 'city centre' is hidden within these beautiful centuries old walls. One of the main attractions when it comes to these historical walls themselves are certainly the gates. In the old days, the four main gates were made of gold, iron, silver and copper. From the original four gates,three gates are still standing. On the photograph above you can see one of those walls! the northern gate, better known as  'silver gates'. Well, the silver part is gone but the gates still stand. The norther gate is more simple when it comes to its appearance, especially compared to the golden gate, but I think they are all quite amazing. I would say that all the gates are a must see sights, and you won't have problems locating them because they are quite grandiose in size. 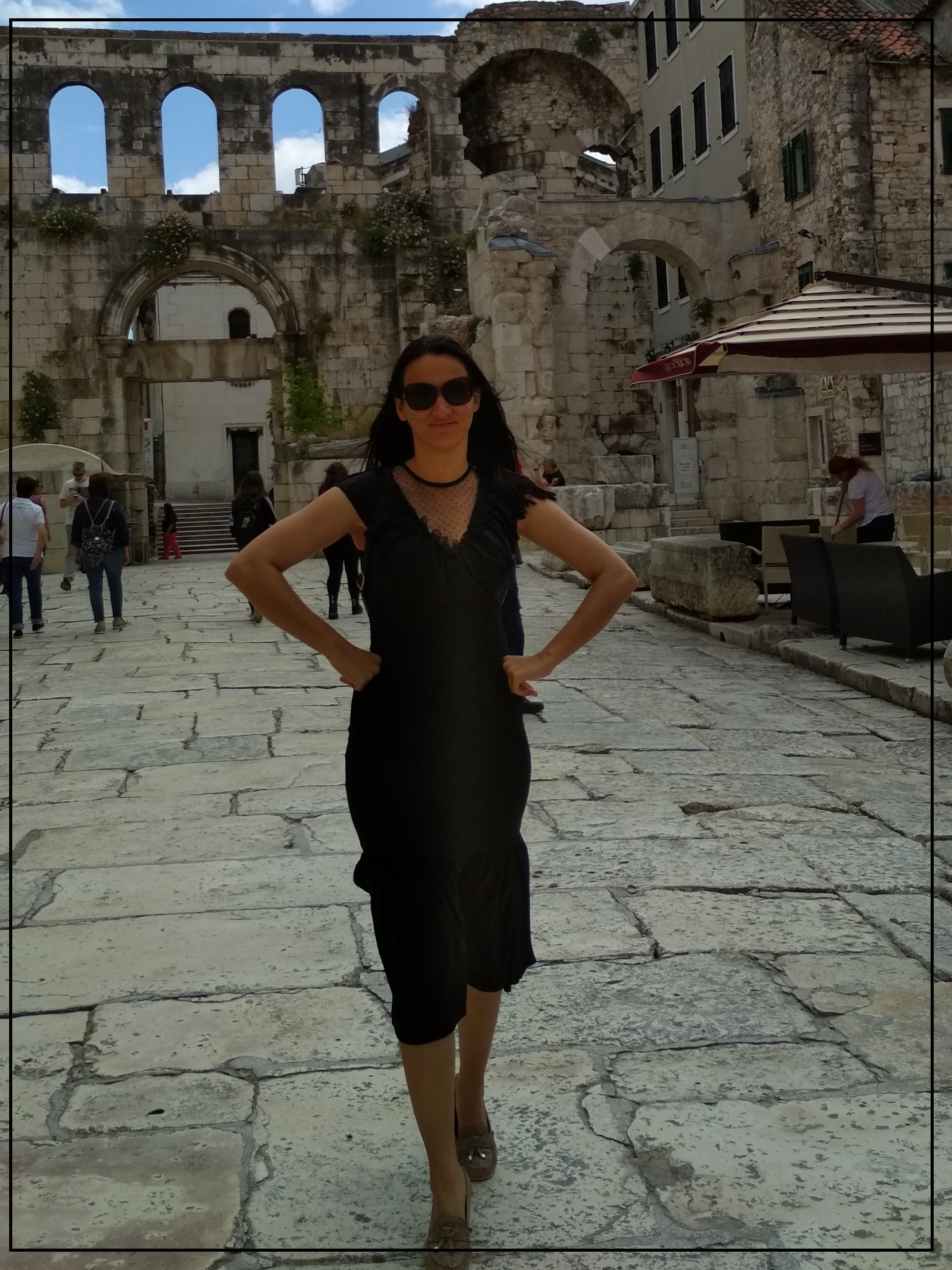 THE MAIN CITY SQUARE
Another place worth the mention is city's square Narodni Trg better known as Pjaza. One of top locations in Split city! This square was formed in the 13th century, when the city's growth demanded a larger main city's square. During its long life, this square saw some changes and it even changed a few names. It started it's long life as a square of saint Lawrence, because in the past a church devoted to this saint was located here. The church is no more, but many medieval structures remain. The main city's square  attractions include a Gothic sun clock (Can you see it behind me?), a Renaissance palace Karepich (Karepić) from 16 century, palace Cambi, palace Pavlovich (Pavlović),  a late Romanesque palace from Korchula's lord Ćubrian Žaninović and many other gorgeous historical old buildings.
MANY OTHER CHARMING SQUARES (TOO MANY TO MENTION THEM ALL!)
There are too many historical squares worth seeing for me to fit them into a single post. What I recommend is exploring the city and finding them for yourself. 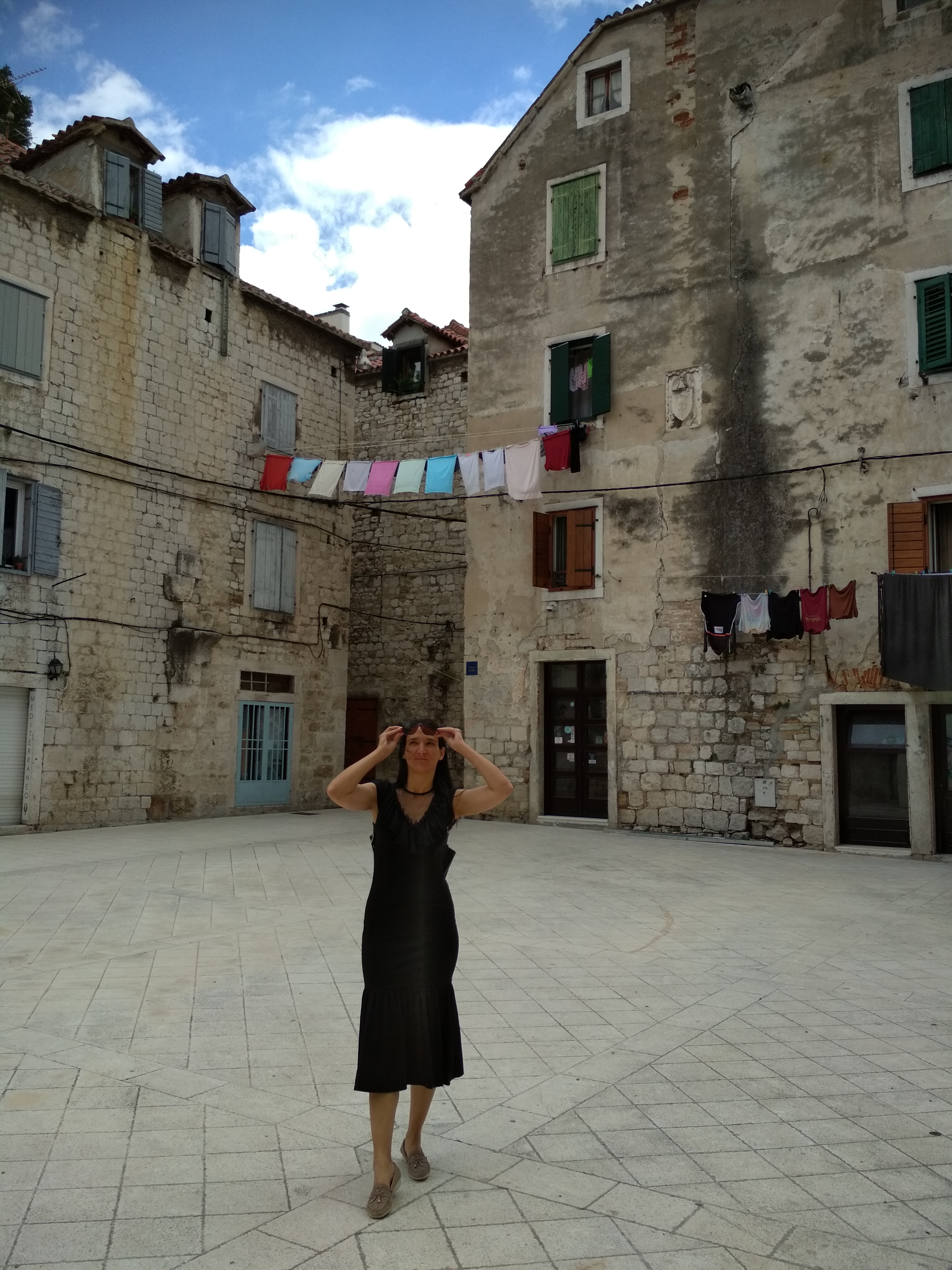 WHERE TO HAVE A CUP OF COFFEE? HOTEL MARUL
One of my favourite place to have a cup of coffee in the centre of city is hotel Marul (neither a sponsored nor affiliated link) just because of how peaceful it is there. A green oasis of sorts. Hotel Marul has a beautiful garden and the staff is very friendly. This hotel is located right next to a monastery and a church so you can also enjoy a nice view. 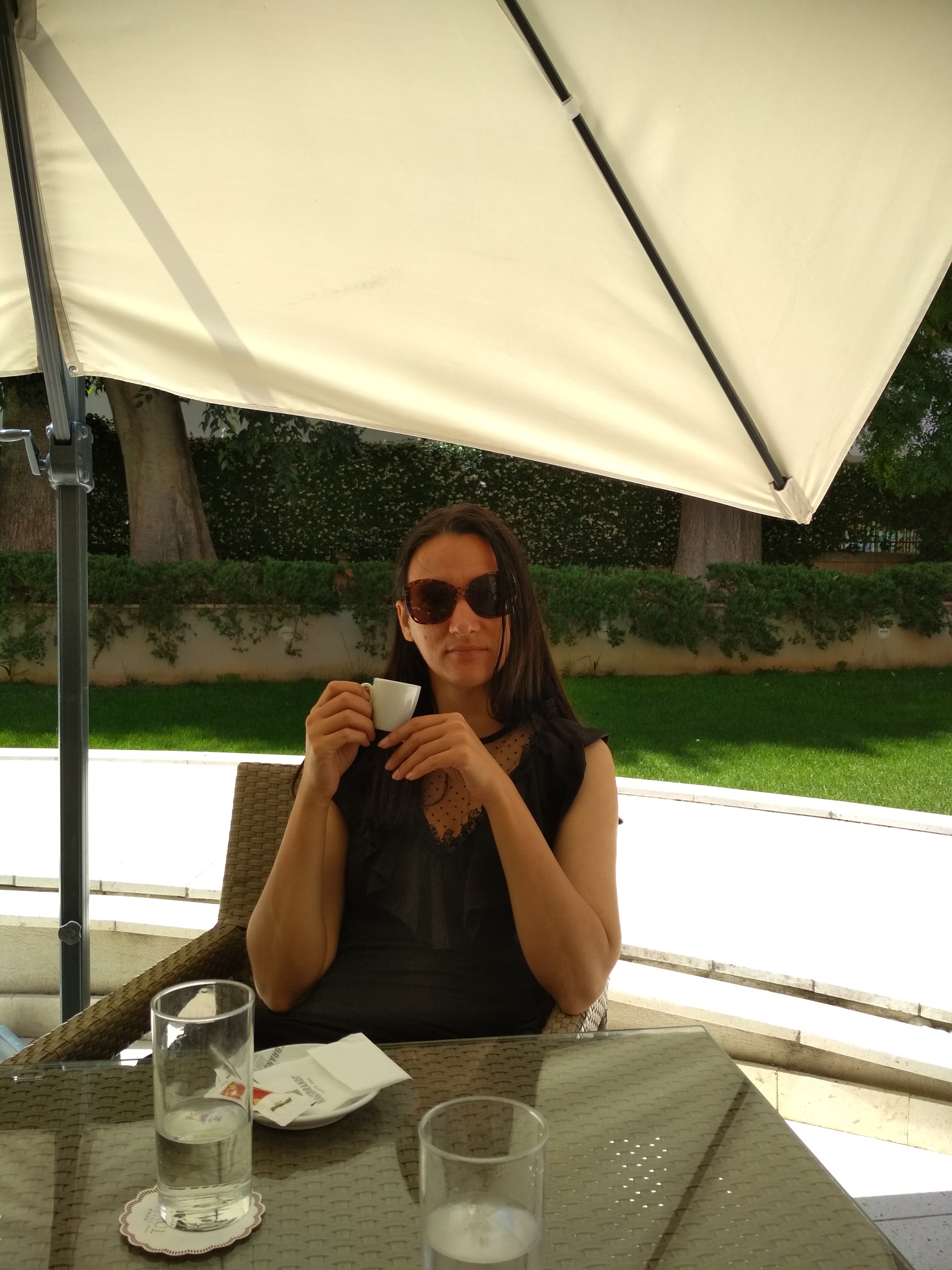 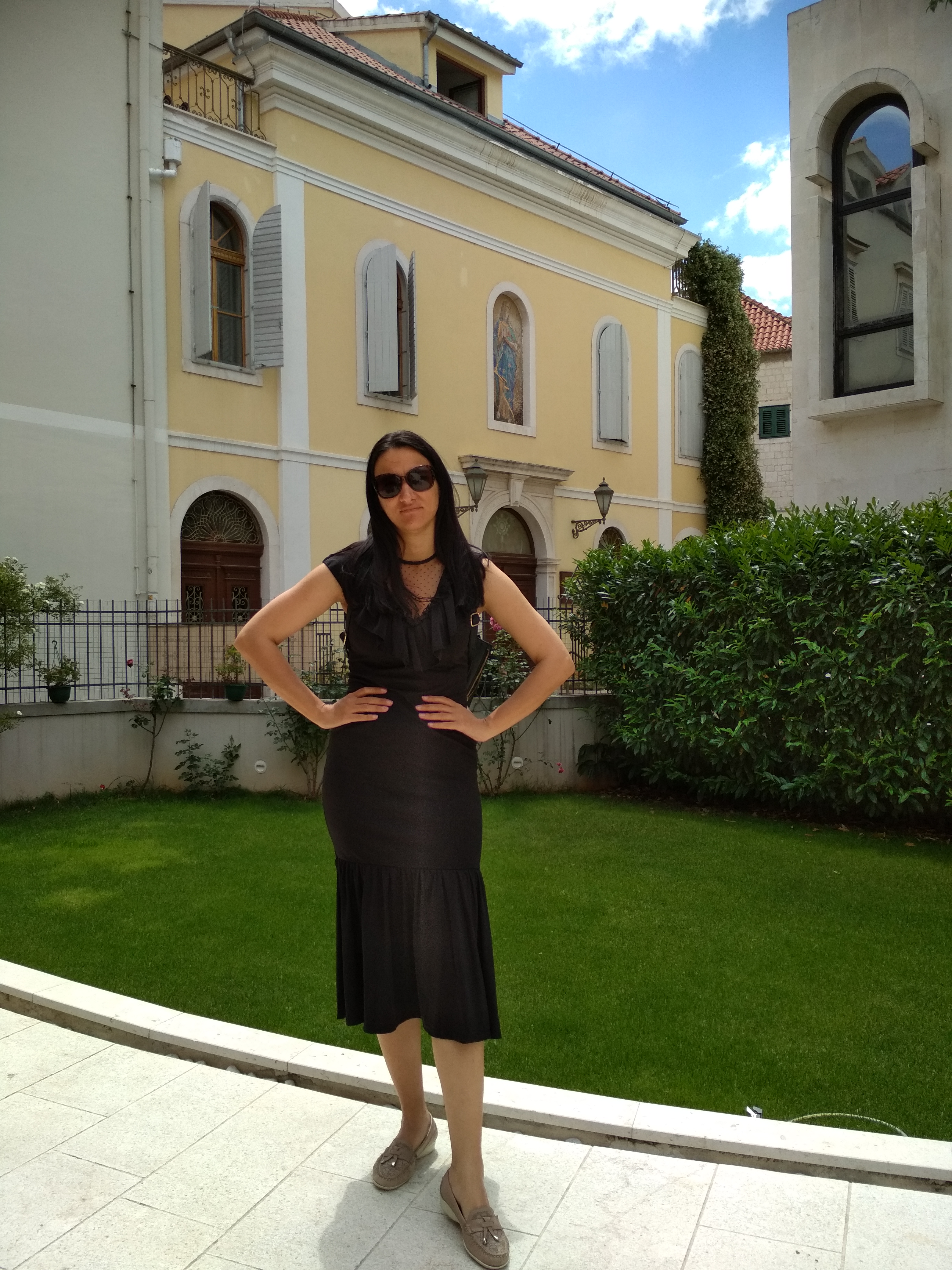 CROATIAN NATIONAL THEATRE IN SPLIT
HNK Split is one of my favourite places in Split city.  Open in 1883, Split's National Theatre is one of the oldest surviving theatres in the region. At time time of its opening, it had a capacity of 1000 seats (at time Split's population counted only 16,000 ). It was the largest theatre of Southeast Europe in its time.  It's such a gorgeous building too! It is worth visiting just for the sight of it. Moreover, this is really the perfect place to see a play, a ballet or an opera, especially so if you're a fan of historical theaters. Why not take the opportunity to see a play on a historical stage? When it comes to Croatian National Theatre Split, I particularly enjoy their opera performances. They have some of the best opera champions. 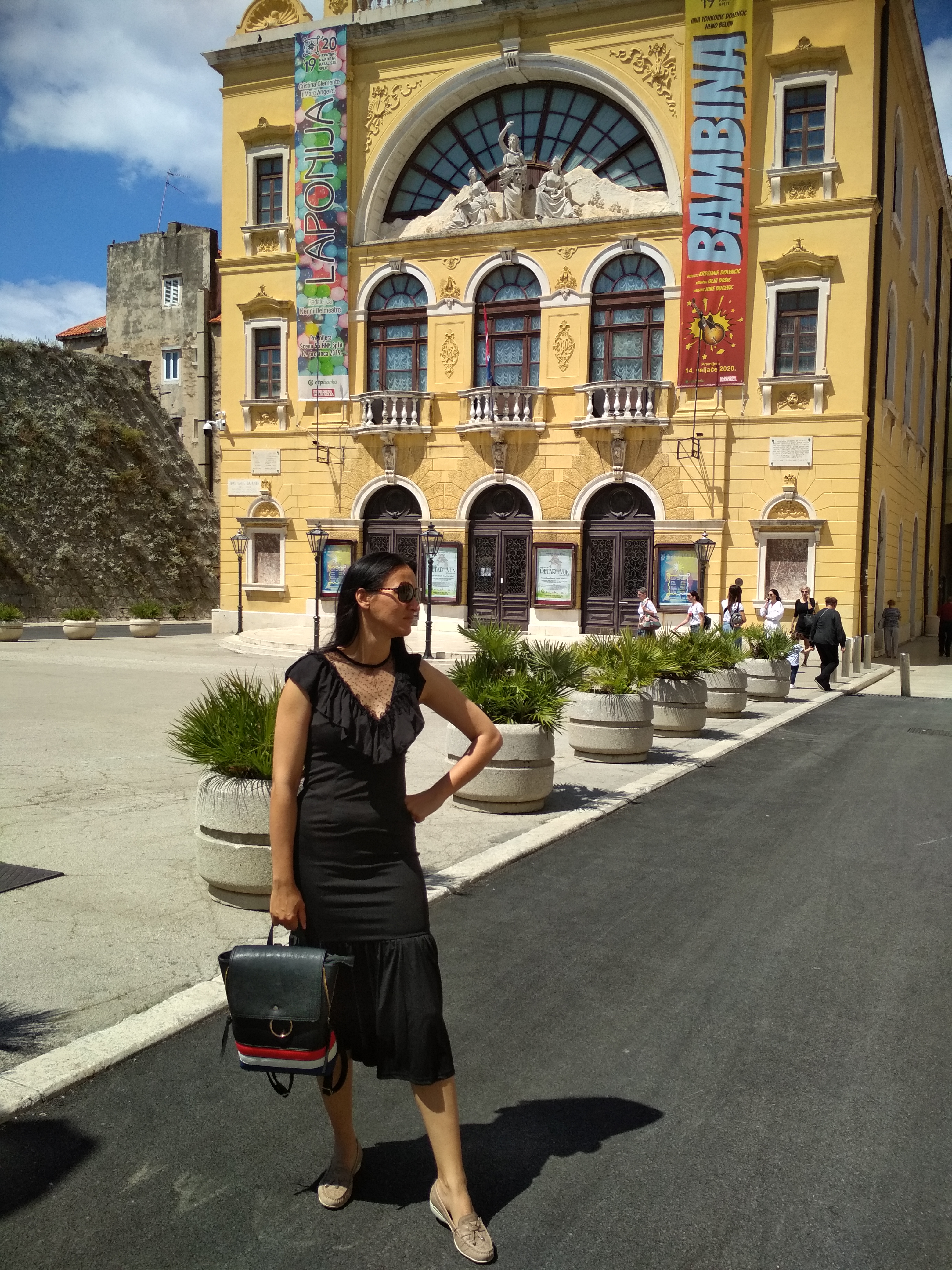 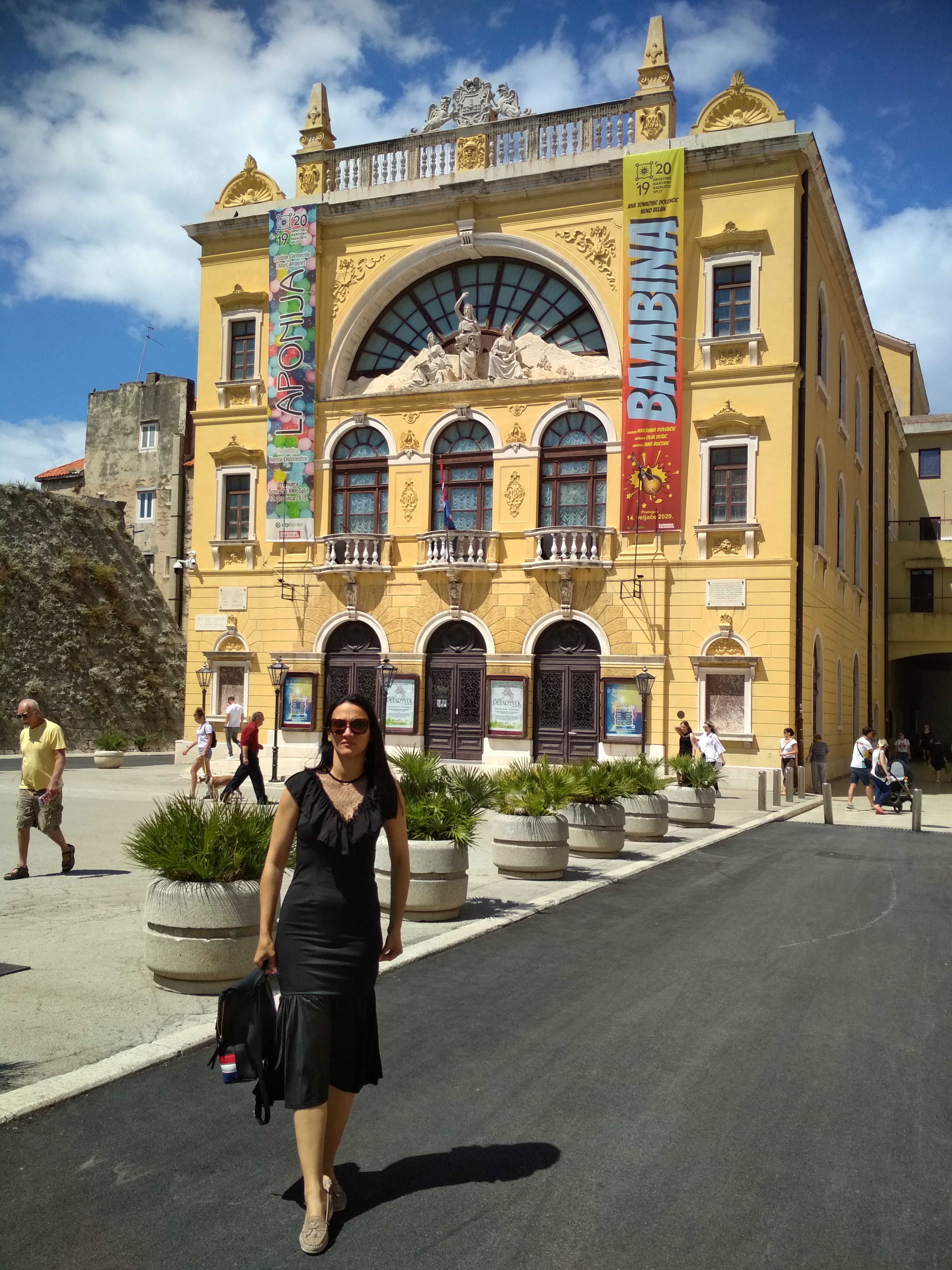 MONASTERY&CHURCH OF OUR LADY OF HEALTH
The church of Our Lady of Health was build in the thirties on a location where an older 18th century church was located. The original church was built in the baroque style as was the bell tower that is still standing. The present day church of Our Lady of Health is built in a modernist style. The monastery was build in the 18th century by Franciscan monks who escaped Turkish invasions. It was connected with the church later on. Today these two constructions contrast one another, one being more modern, the other more traditional. 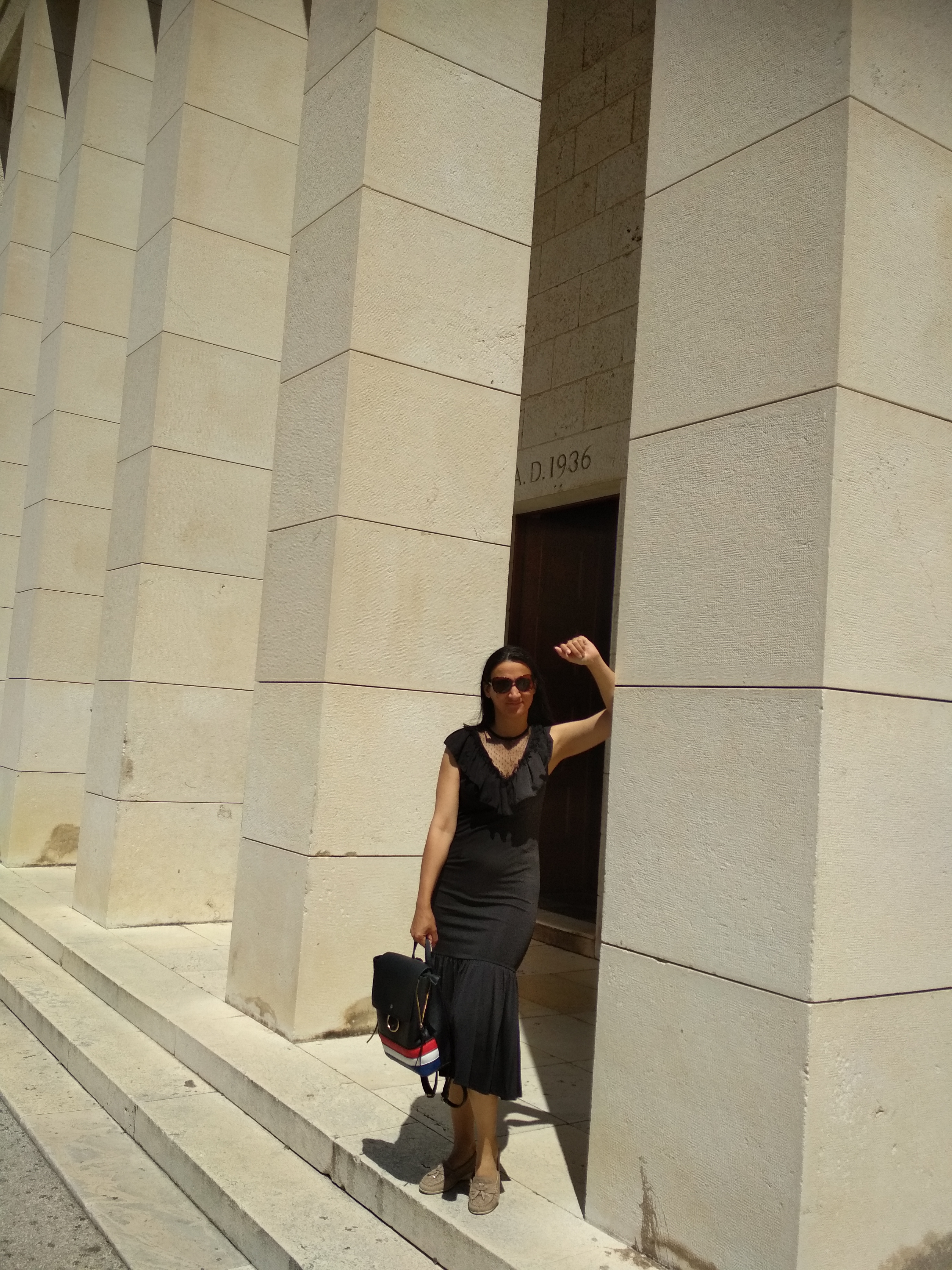 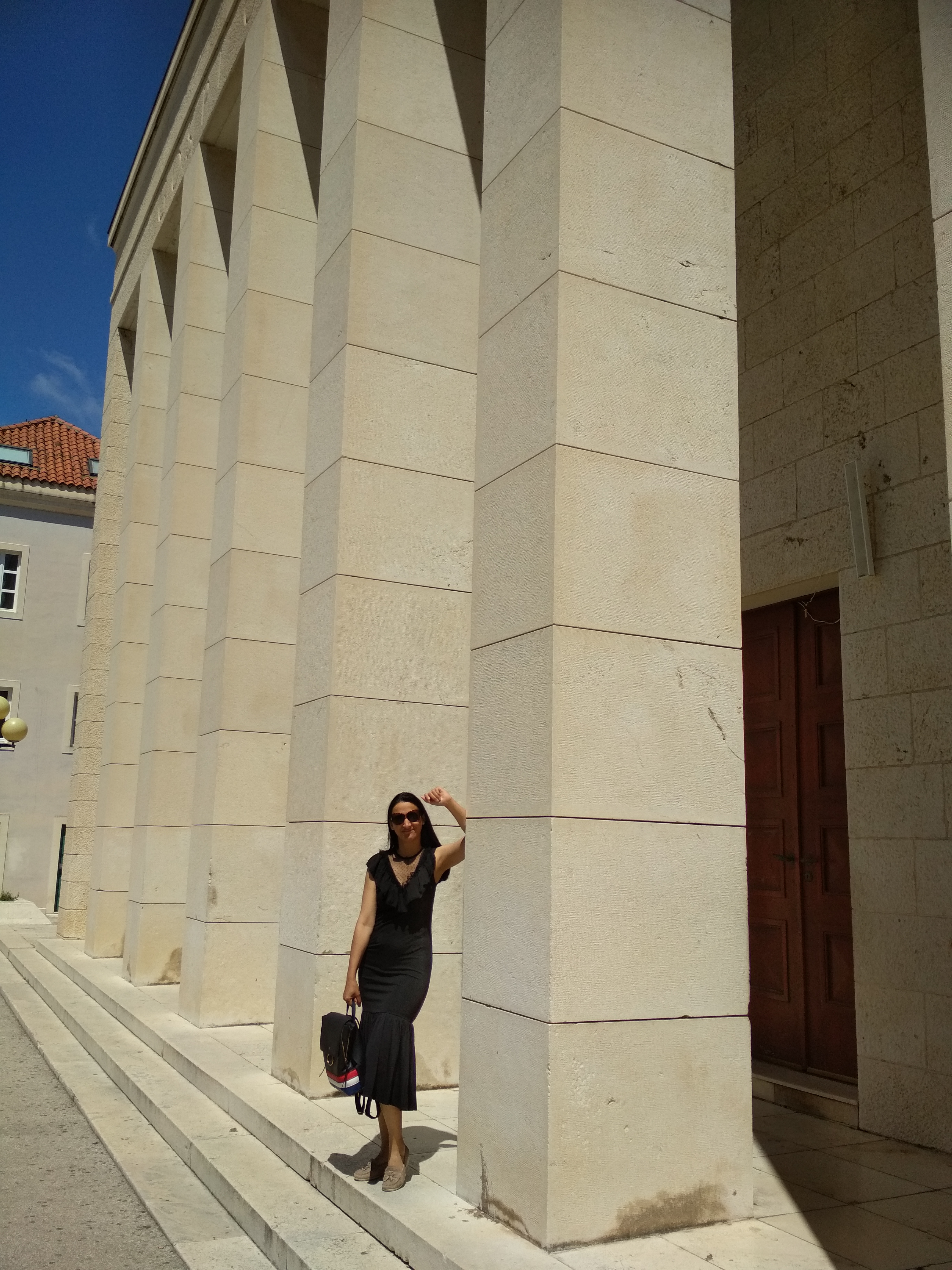 Thank you for reading and visiting. I hope you're feeling and doing better than me. Have a lovely day! Stay safe and take care.