August 15, 2018
Today's post is a continuation of this one.  If you remember last time we stopped at Peristyle, the main square during Roman times. Today Peristyle serves the purpose of 'Piazza Del Duomo', that is the cathedral's square. That's what we checked out last time. Now, we're going to continue walking through the narrow street (filled with cute shops) that leads to another square "Narodni Trg Pjaza" ( I suppose we could translate it as People's Square/Piazza). Narodni Trg, a city square that was a logical consequence of city's urban development, is a lovely place to visit. There are some really nice restaurant and coffee places there. This main city's square is quite photo/Instagram worthy as well.  I should know, since it's one of my favourite places in Split city. For centuries this place has been the centre of life in Split city, so it is definitely worth a visit. Maneuvering Split's Mediterranean narrow streets can be a challenge at times, but the walking distance between these two squares is minimal, so you can be sure you won't get lost. Speaking of which, using square's as reference is a great way to orientate yourself in Mediterranean villages and cities. That's how I would do it when I was a little kid. Once I grew older, it became natural to me.

What to Wear For Sightseeing: Interesting Facts About Split City 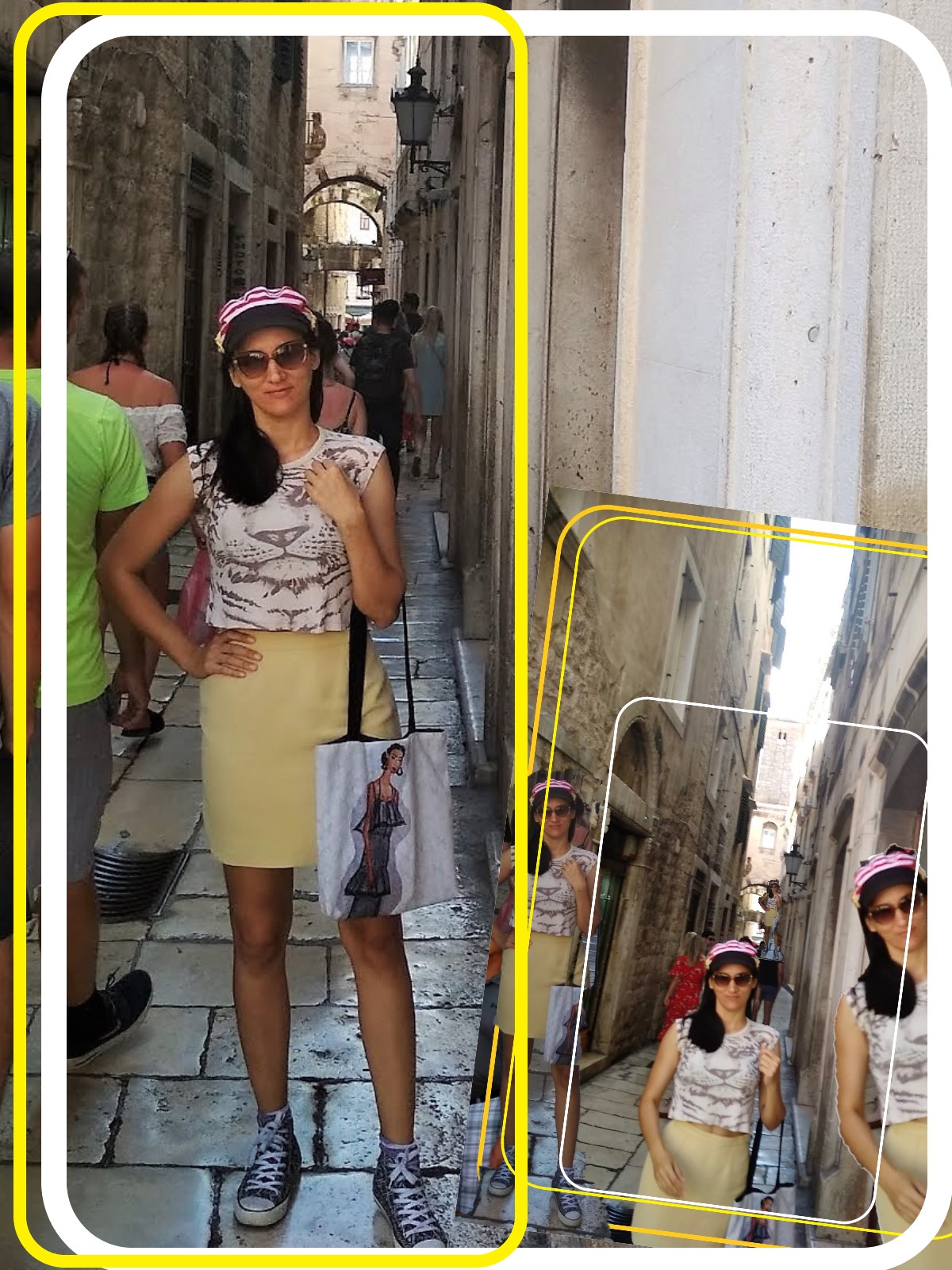 Here we are, at city's square Narodni Trg better known as Pjaza. One of top locations in Split city! This square was formed in the 13th century, when the city's growth demanded a larger main city's square. During its long life, this square saw some changes and it even changed a few names. It started it's long life as a square of saint Lawrence, because in the past a church devoted to this saint was located here. The church is no more, but many medieval structures remain. The main city's square  attractions include a Gothic sun clock (Can you see it behind me?), a Renaissance palace Karepich (Karepić) from 16 century, palace Cambi, palace Pavlovich (Pavlović),  a late Romanesque palace from Korchula's lord Ćubrian Žaninović and many other gorgeous historical old buildings. Too much history to be fitted into one post, but I hope I managed to select good highlights for you. I have many fond memories of this square, one of them being book swamping. When I was younger,  this is where the students would meet to exchange handbooks (and buy new ones). There used to be several book stores here! Some of these book shops are gone, but at least one is still here so if you want to shop books, this is as a good place as any. Speaking of shopping, the prices in most cafes here are slightly more affordable than those on Split's famous promenade Riva (possibly because there is no direct sea view here). I think the prices in restaurants are about the same, though. 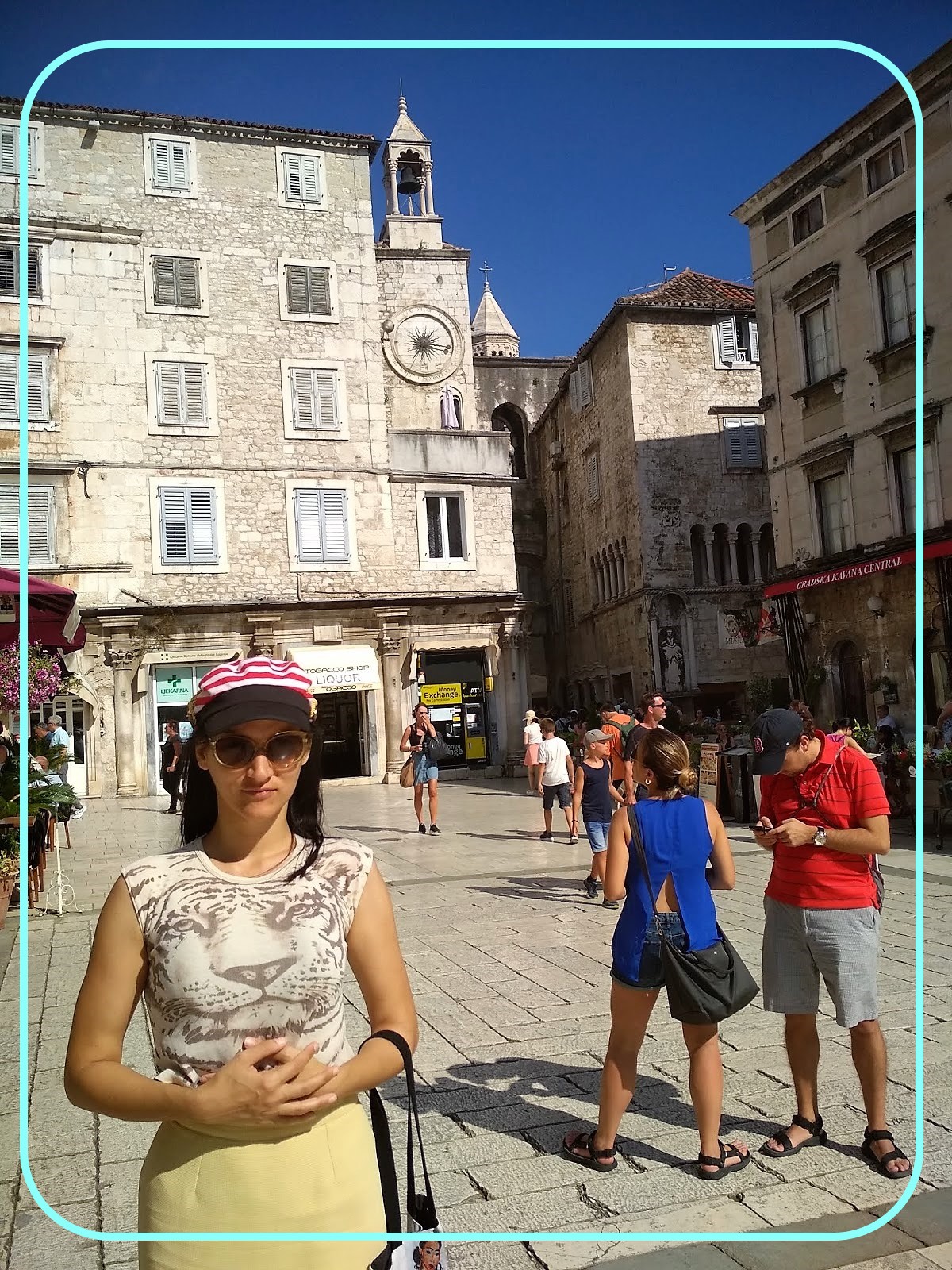 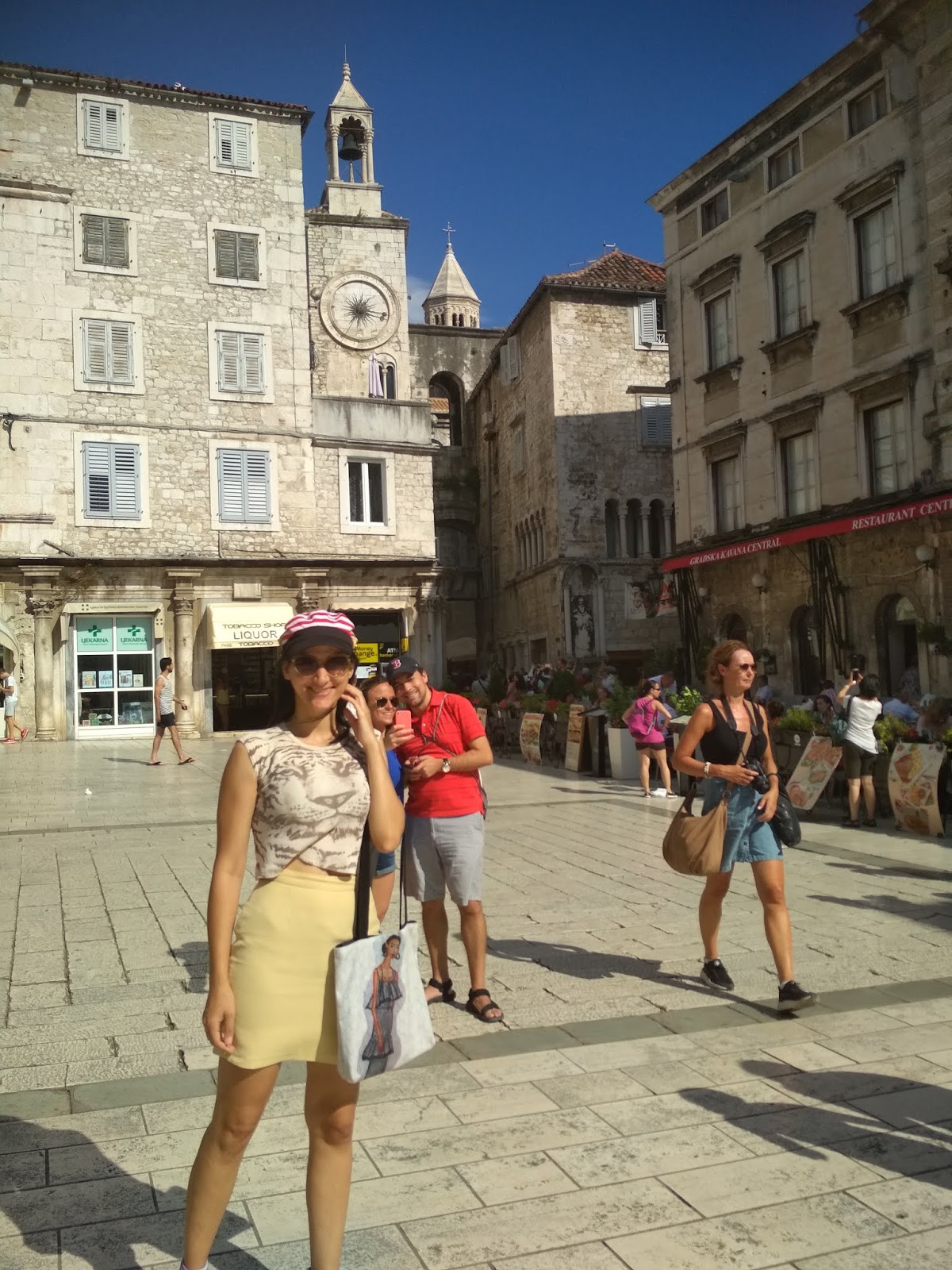 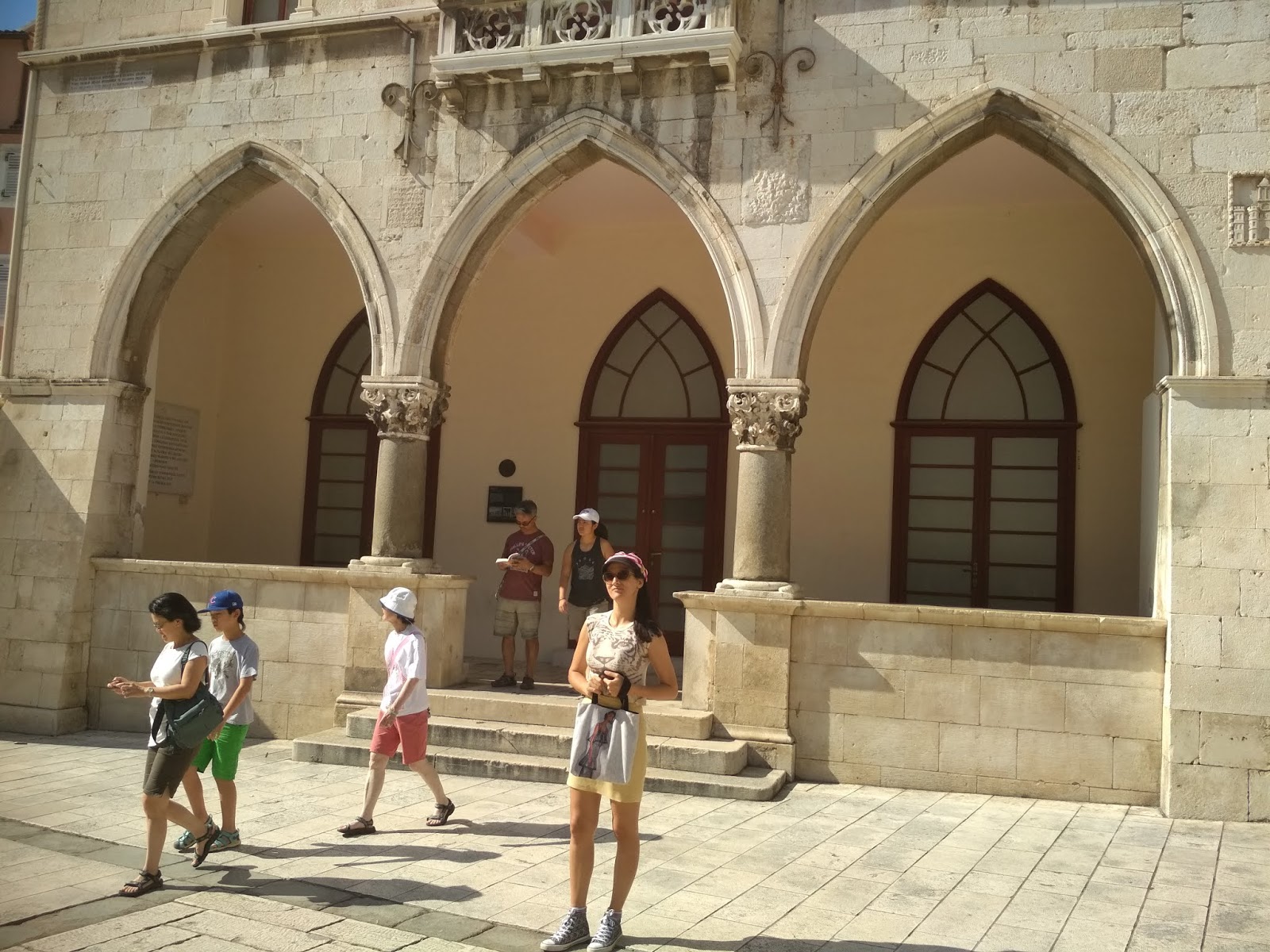 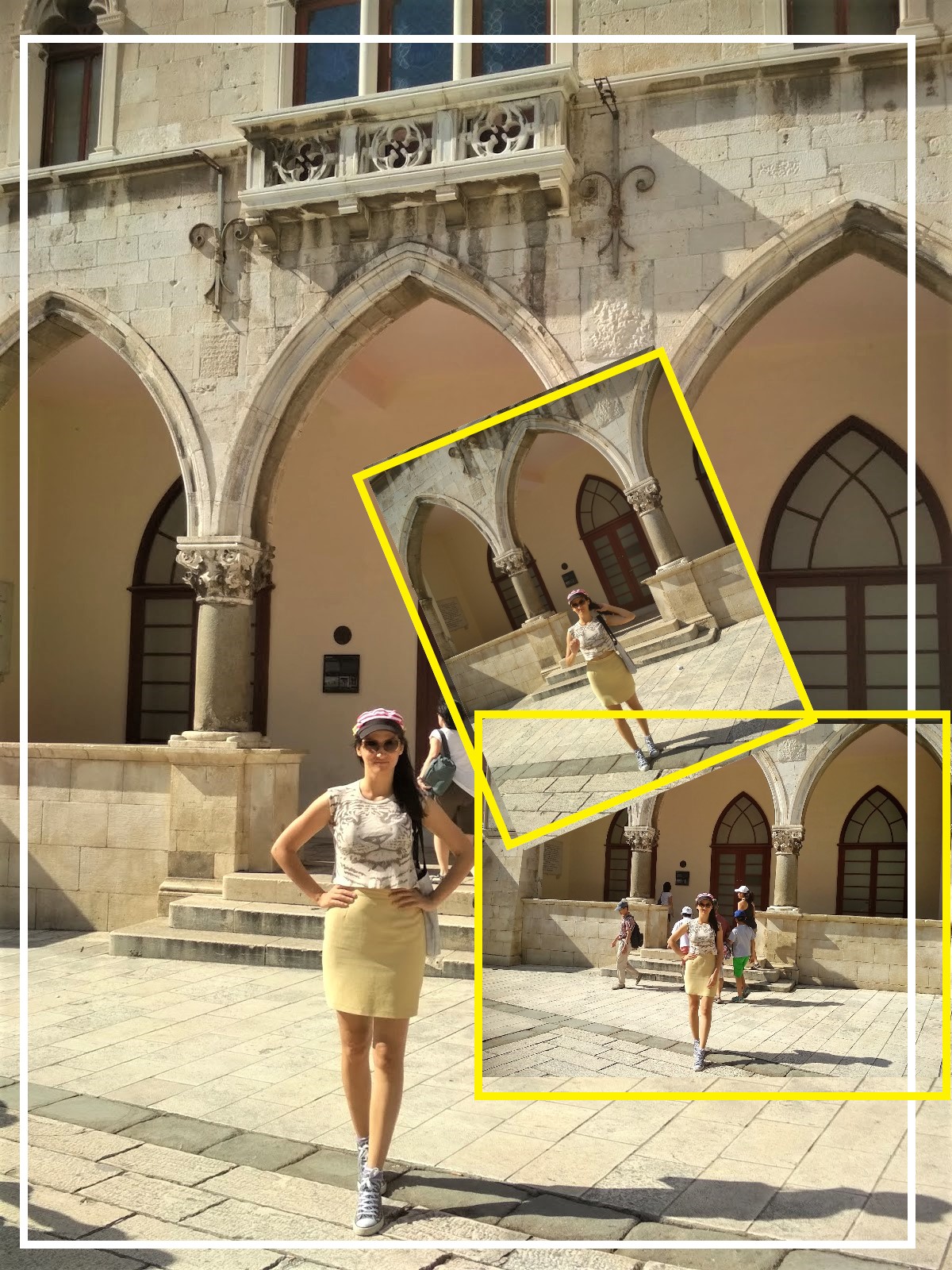 Moving on. I want to share a few images of Split's National Theatre with you. Open in 1883, Split's National Theatre is one of the oldest surviving theatres in Dalmatia's region. At time time of its opening, it had a capacity of 1000 seats (at time Split's population counted only 16,000 ). It was the largest theatre of Southeast Europe in its time.  It's such a gorgeous building too! It is worth visiting just for the sight of it. Moreover, this is really the perfect place to see a play, a ballet or an opera, especially so if you're a fan of historical theaters. Why not take the opportunity to see a play on a historical stage? When it comes to Croatian National Theatre Split, I particularly enjoy their opera performances. They have great opera champions. The ballet company is very good as well. Order tickets online to to make sure you get them on time. 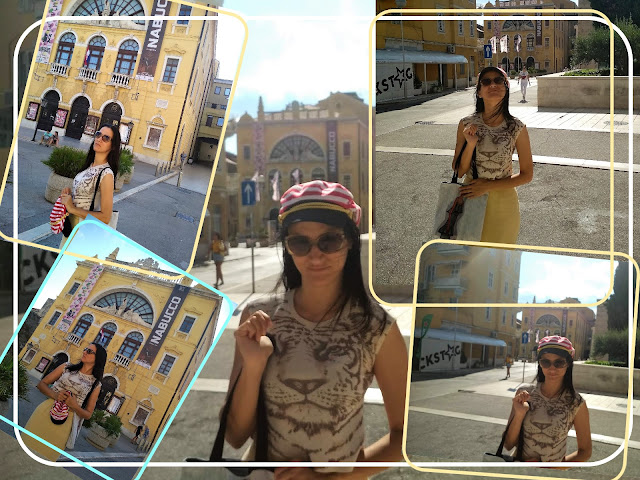 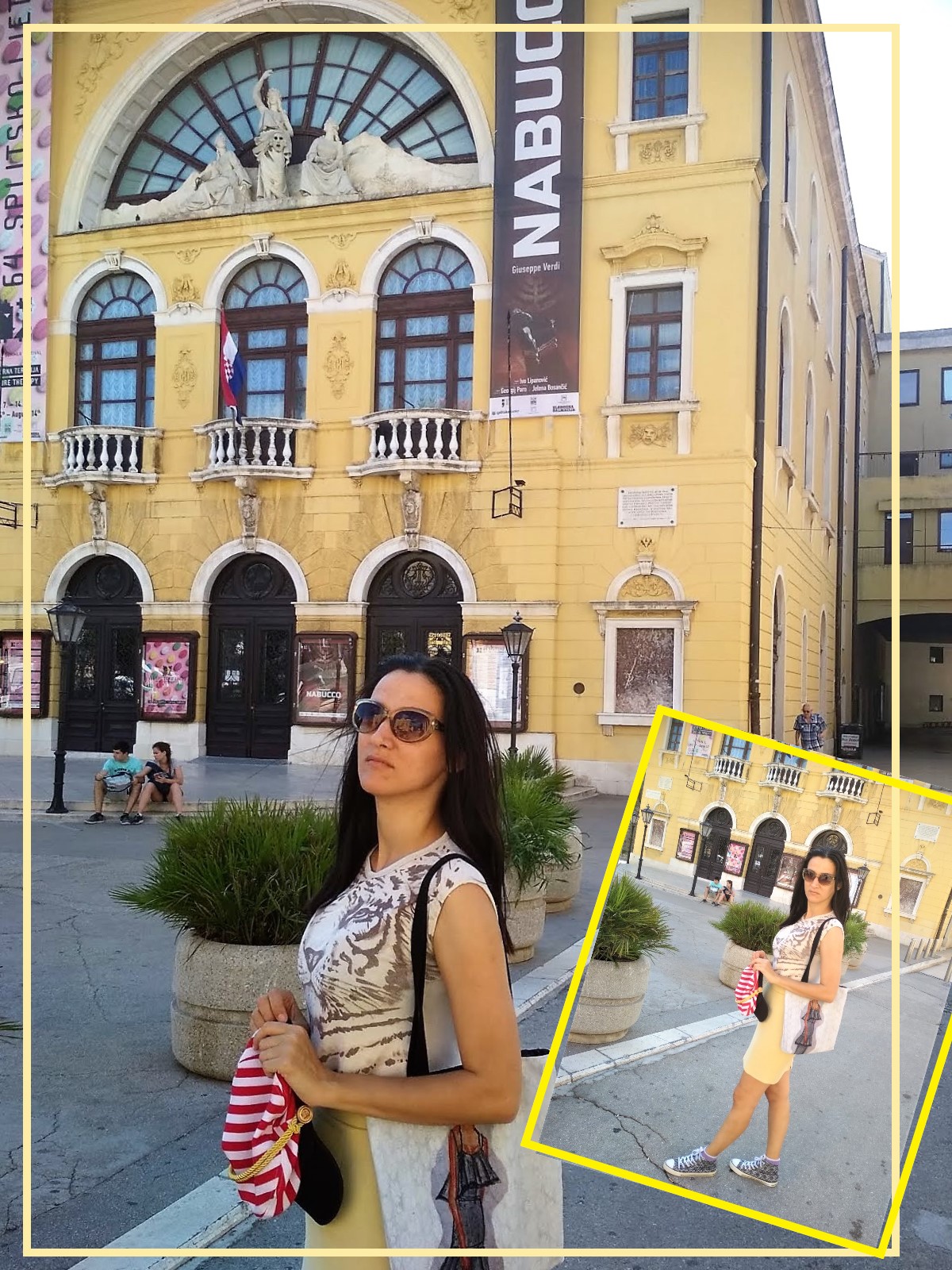 Thank you for reading and visiting. I hope you have enjoyed finding out something new about Split city.  Are you enjoying this summer? I hope you are. Have a great day!

This morning I read an amazing novel. Le Diable au corps (translated as The Devil In the Flesh) is a novel by Raymond Radiquet. Believe it or not, this was by first book by this French writer. I don't think I even heard of him before, which is odd, but well, it happens. In his time, Raymond was quite a celebrity and he is still considered as one of the important French writers of that period. Did I like this novel? Quite frankly, I loved it. I just couldn't put this novel down. I must have read it an hour or so. I got up a bit more earlier this morning so I actually had time to read it with my morning coffee (it is not a very long novel but still it is amazing how easy it was to find one's self glued to those pages). Perhaps I should make it a habit, getting up more early so I can read more.
Jutros sam pročitala divan roman. Đavo u tijelu  (naslov izvornika Le Diable au corps) je roman Raymonda Radiqueta. Vjerovali ili ne, ovo je moj prvi roman ovoga pisca. Mislim da nika…
Read more