September 21, 2018
Today I'm sharing a new fashion illustration with you. The dress I illustrated is a Dolce & Gabbana creation from Autumn/Winter 2018/2019 collection. Speaking of which, how did you like the collection? Are you a fan of this designer duo? This is not the only black dress from that collection that caught my eyes, but it's the one I deemed the prettiest. The black dresses from this D&G collection are definitely eye candy. In the past I have illustrated this brand a couple of times. If you want to see more of mine D&G inspired fashion illustrations, you can check out some out here and here.
The fashion illustration I'm sharing today is a mixed media, coloured pencils and watercolour on paper. I prepared a few photographs of the 'making of' process and a short description of the drawing and painting process. Scroll down to see and learn more. On overall, I'm happy how this turned out. I'm even considering gifting it to somebody. It's neither a super detailed realistic creation or an extremely artistic illustration, but it's definitely more than a simple fashion sketch. I did put some time and effort into it. Not a terrible amount of time and effort but I did put some thought into it and I think it looks nice enough to be showed. Since I'm hoping to start a  new ' Friday Fashion Illustration' feature, it makes sense to post it here, doesn't it? 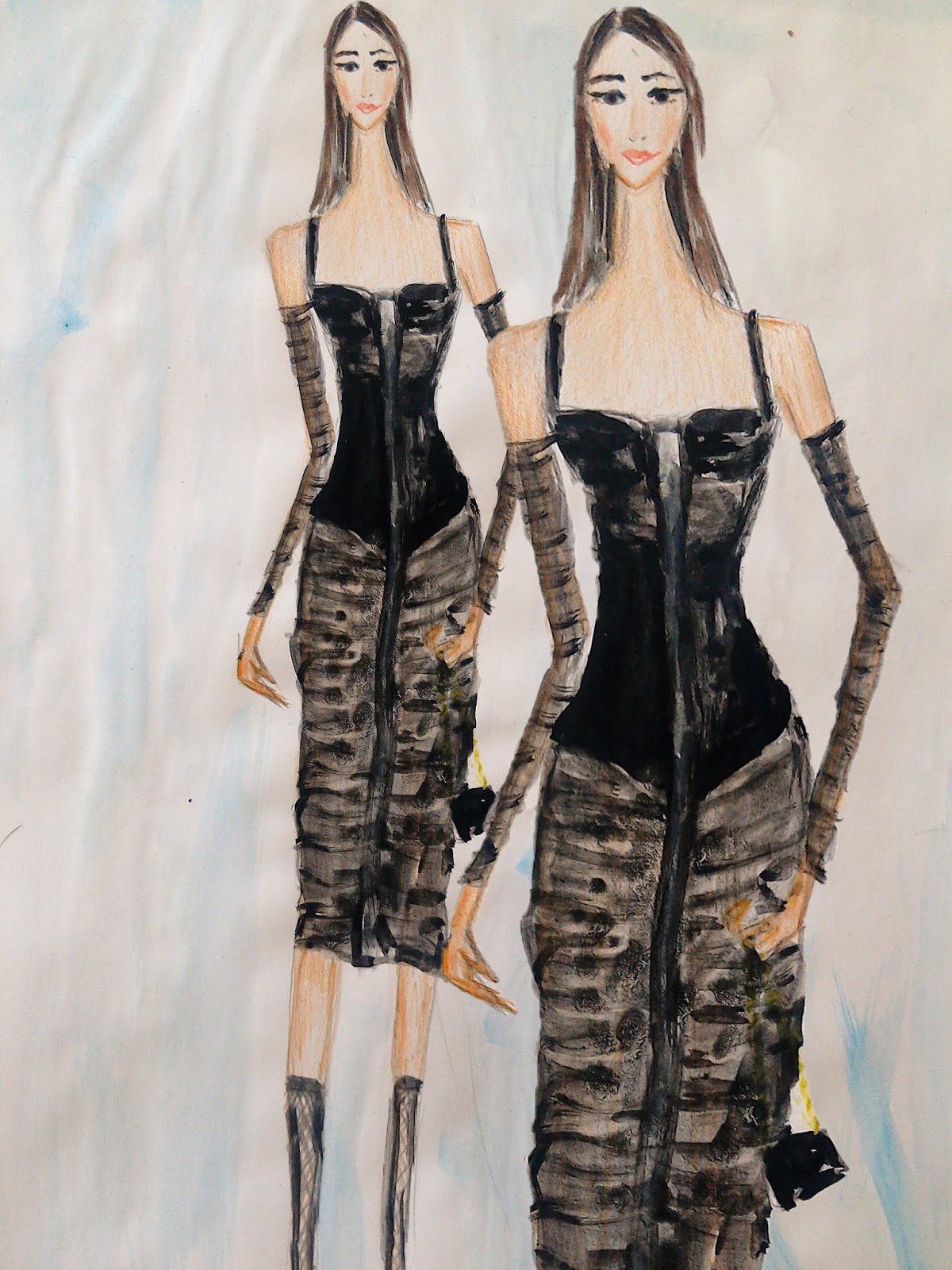 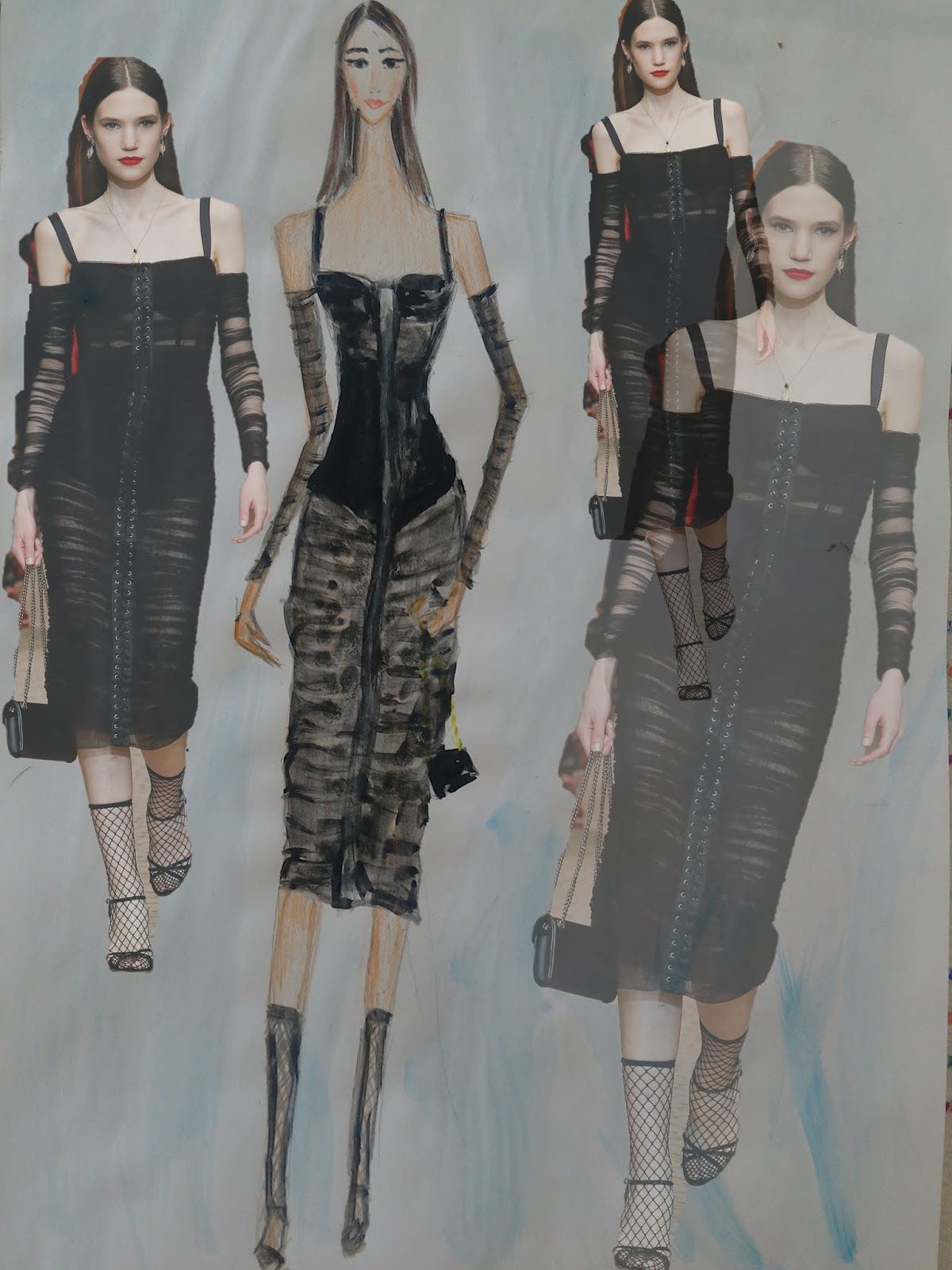 MAKING OF A FASHION ILLUSTRATION
THE SKETCHING PROCESS IN 3 STEPS

As I said, this is a mixed media illustration. First I sketched the body and the dress outline with an ordinary pencil, then I coloured the body with a coloured pencils in a brown shade. I choose a body pose that I like and I went with it. Typically when I want to illustrate a runaway look, I don't like to rely only on photographs because it is hard to see the details (such as how the fabric falls) on a frozen image. That is why I like to sit down and watch the entire show on the YouTube. I usually mute it because I'm not a fan of modern music, but I do pay attention. There is something fun about selecting a runaway look to illustrate and waiting for it to hit the stage. 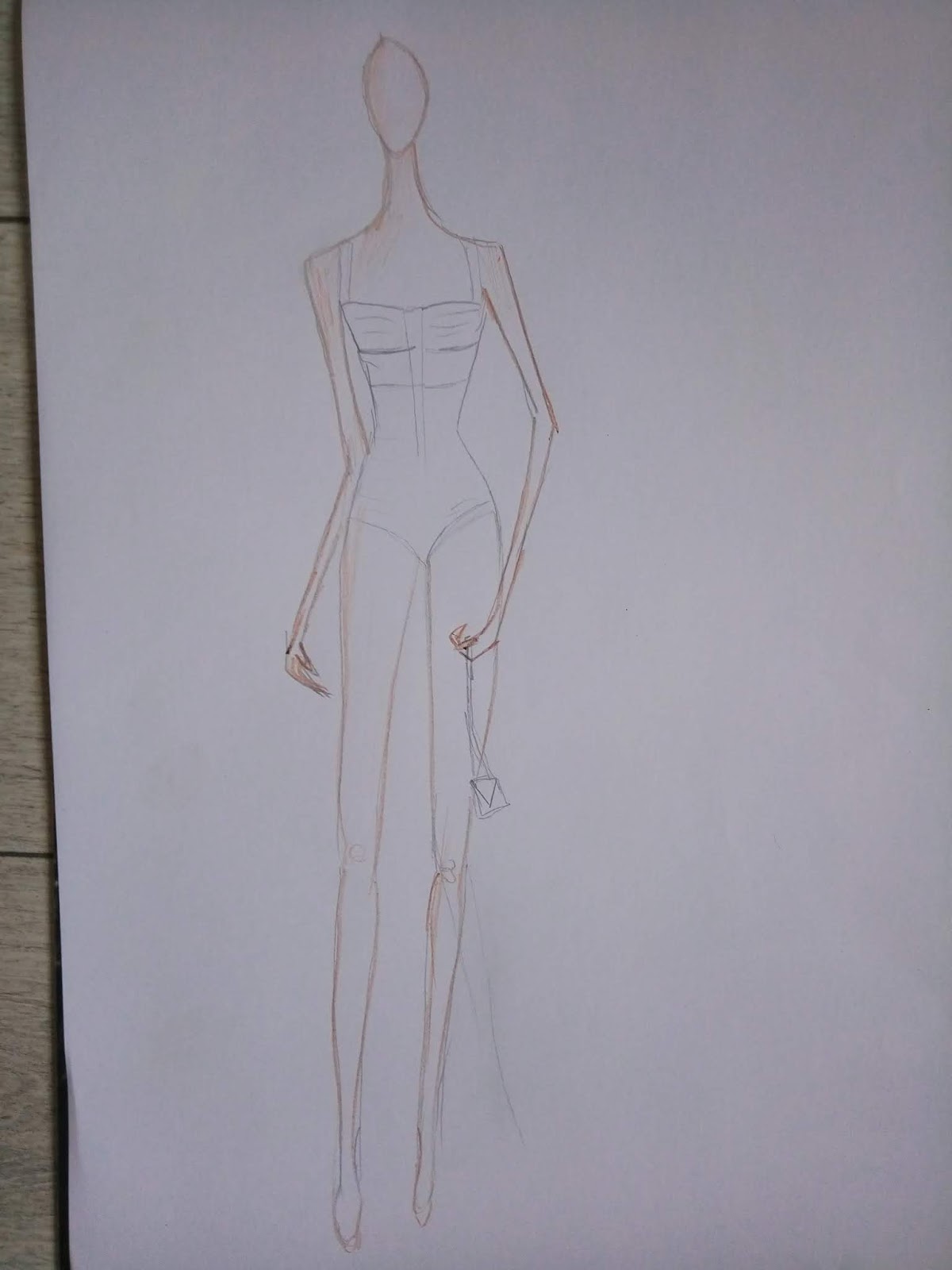 The second thing I did was to add more details. I illustrated a sheer dress so I had to make sure to convey that. I colour the darker undergarments with a black pencil and drew the details that were to represent sheer tulle material. I coloured them with a black pencil just a little bit. As you can see, I've also drew some other details, such as the fish net stockings and the gloves with a black pencil. 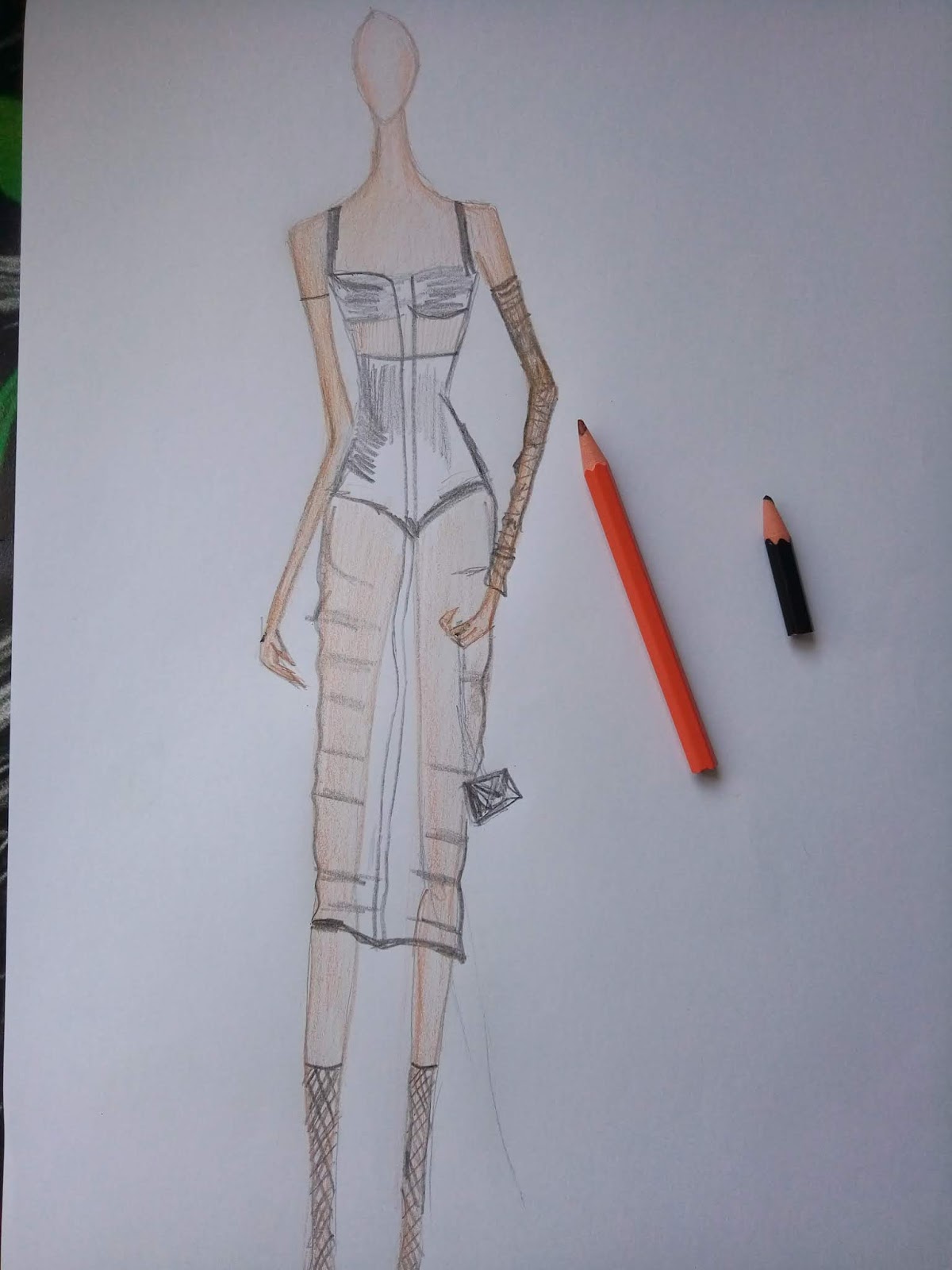 Finally, I coloured the dress with watercolours. I tried to capture the material that way. I also painted some details such as the eyes and the hair with the watercolours. I think that adding the watercolour was the right thing to do. I even added a  blue background (that for some reason seemed appropriate). And that is how this mixed media illustration was made! Let me know what you think. 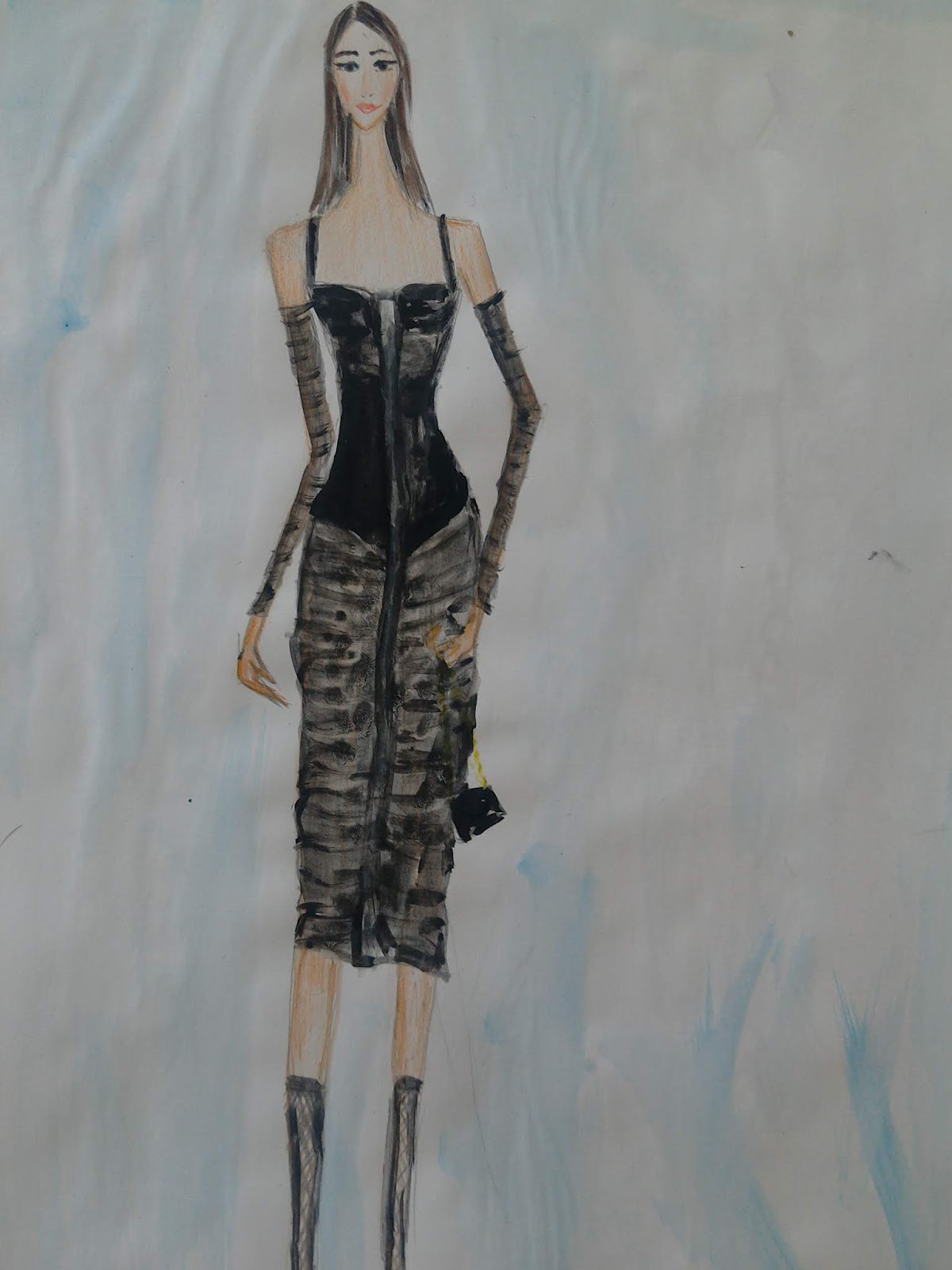 I'd also like to thank you for all your support and get better wishes. They are very much appreciated. It's been a stressful period for me, health problems and some other things, but hopefully the difficult times are coming to an end. I promise to catch up with your blogs when I can. Speaking of which, I'll probably blog less frequently in the time to come and spend less time on social media. Have a fantastic weekend everyone! 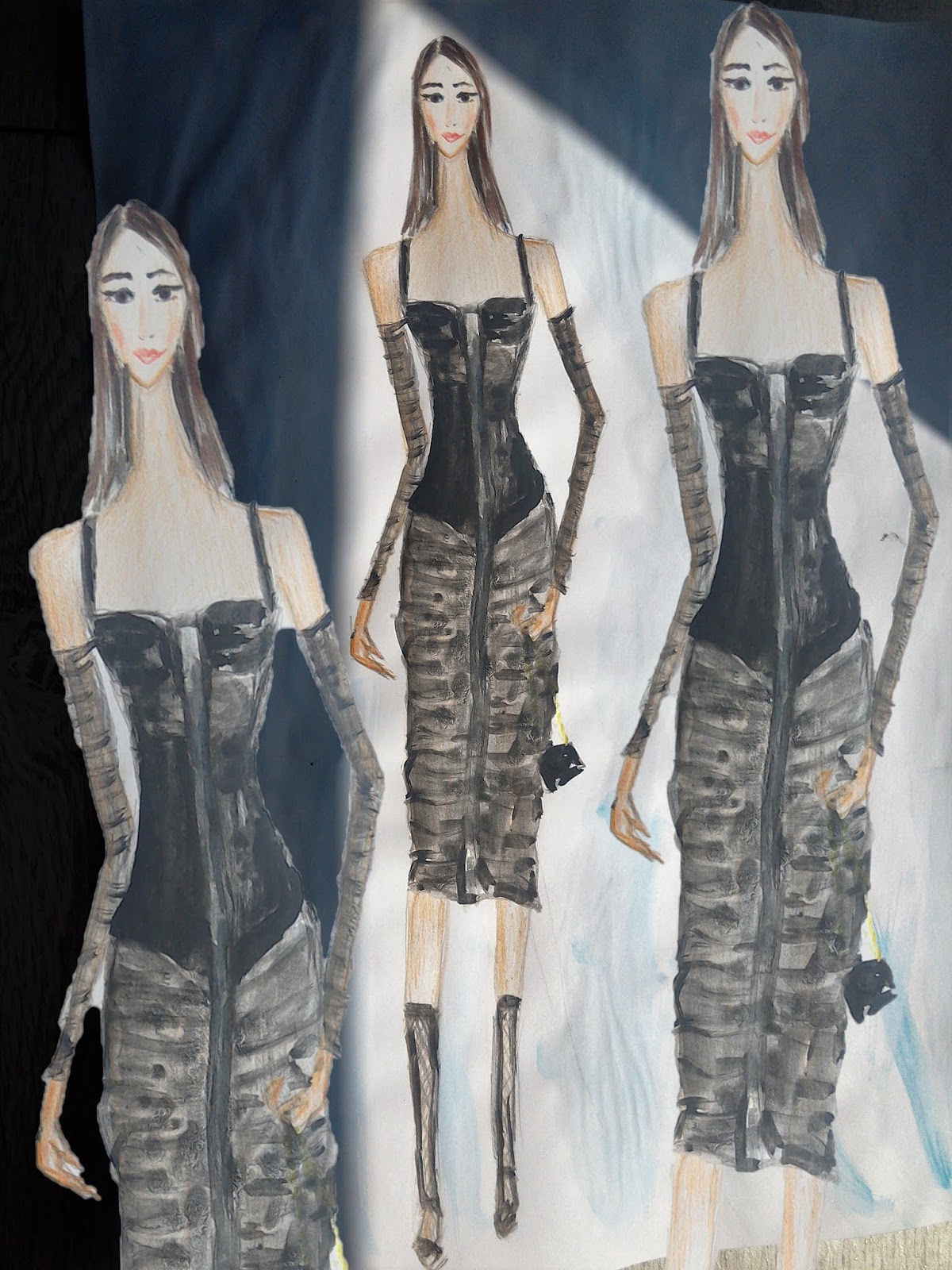 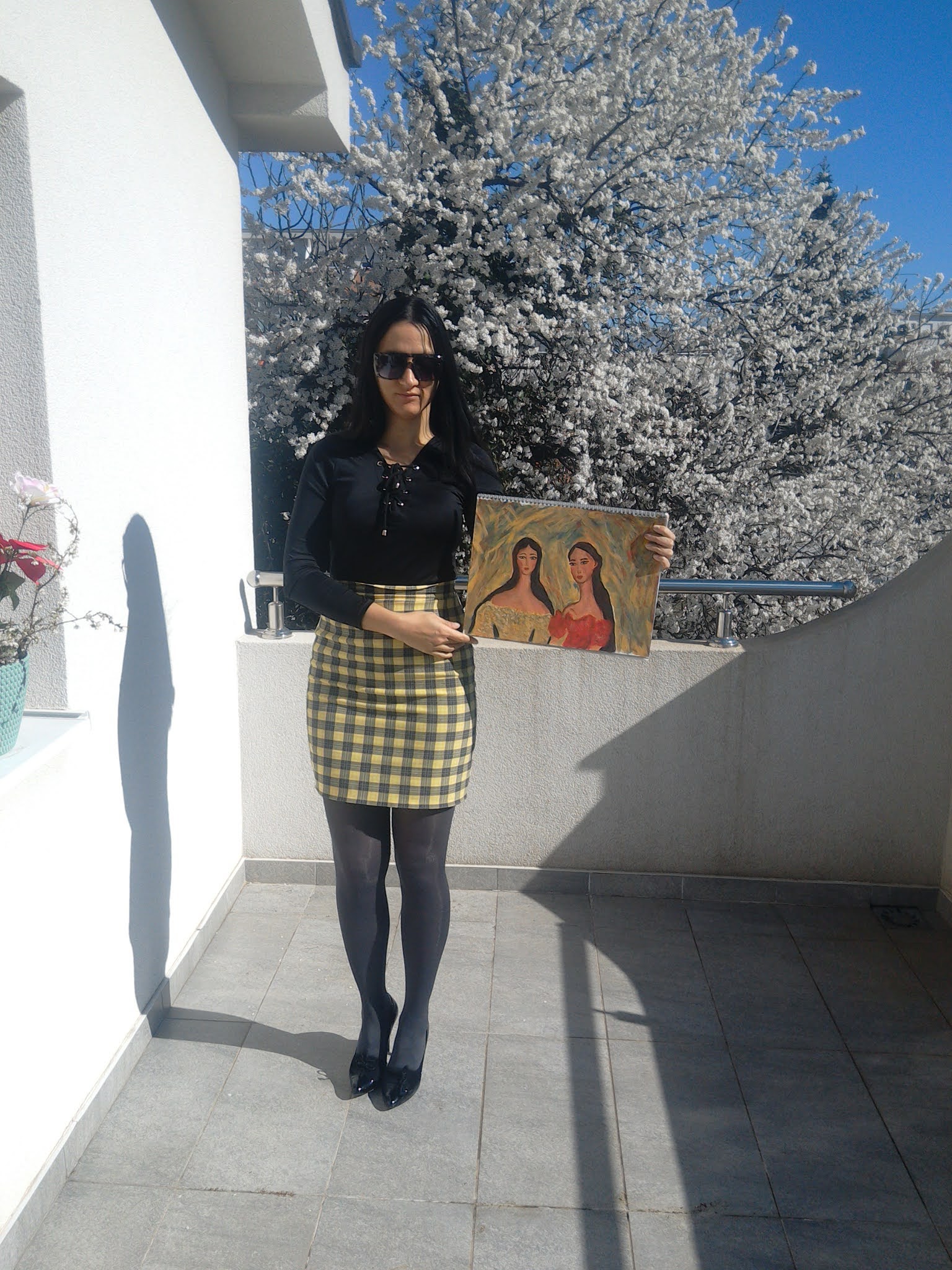 Hello readers! How are you doing? Today I'll share some new paintings with you as well as show you a cosplay outfit. Lovely Kezzie from kerenzaallin-garner.blogspot.com is celebrating her 40th birthday and in her honour some bloggers are wearing Dr Who inspired outfits. Kezzie always does such a great job of cosplaying Dr Who, especially so when it comes to Clara's outfits.  I haven't really seen a lot of Dr Who episodes but I'm familiar with the concept of the show.  There are some definitely lovely fashion moments there. My cosplay is not the best because I didn't manage to find anything exactly like Dr Who outfits I was aiming for, but here it goes. I'm cosplaying Clara's red tartan skirt outfit by wearing a yellow tartan skirt. I could have done a better job if I planned this look in advance. I wanted to wear a white shirt with this but I didn't manage to find any white shirts.  This vintage skirt is my mother's and the black top is actually a dr
Read more 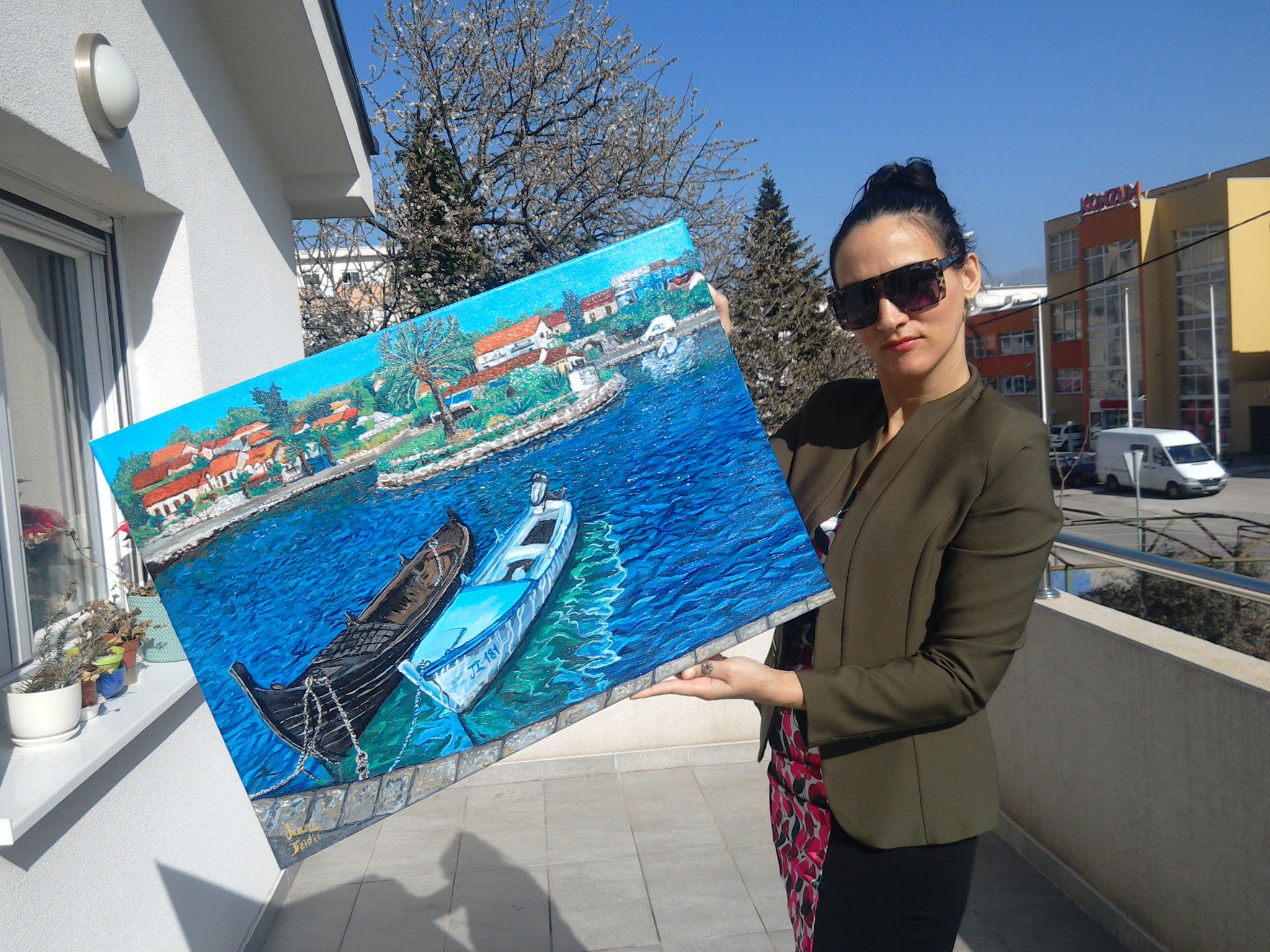 Today I'm excited to share with you my new acrylic painting of Vrboska village on island Hvar. The title of the painting is: Lost in Time. That's what this village feels like to me: a magical oasis lost in time. In other words,  Vrboska  served as a perfect inspiration for this sun-bathed painting. The painting itself took me about 100 hours to finish. It was a very labour intensive piece and I worked on it for two weeks every day. I don't know how well you can see it, but I spent hours working on the tiny details, making sure I captured every shadow. I used a photograph taken by my husband as a reference, but I made some small changes. For example, I didn't include myself in the composition because I wanted the attention on the fishing boats. The painting was a challenge. It required a lot of work and it caused me joint pain. I think it was worth it in the end because when I look at it, I really feel as if I was there in Vrboska. You will see the reference photograph o
Read more

30+ WAYS TO STYLE A MAGENTA COAT 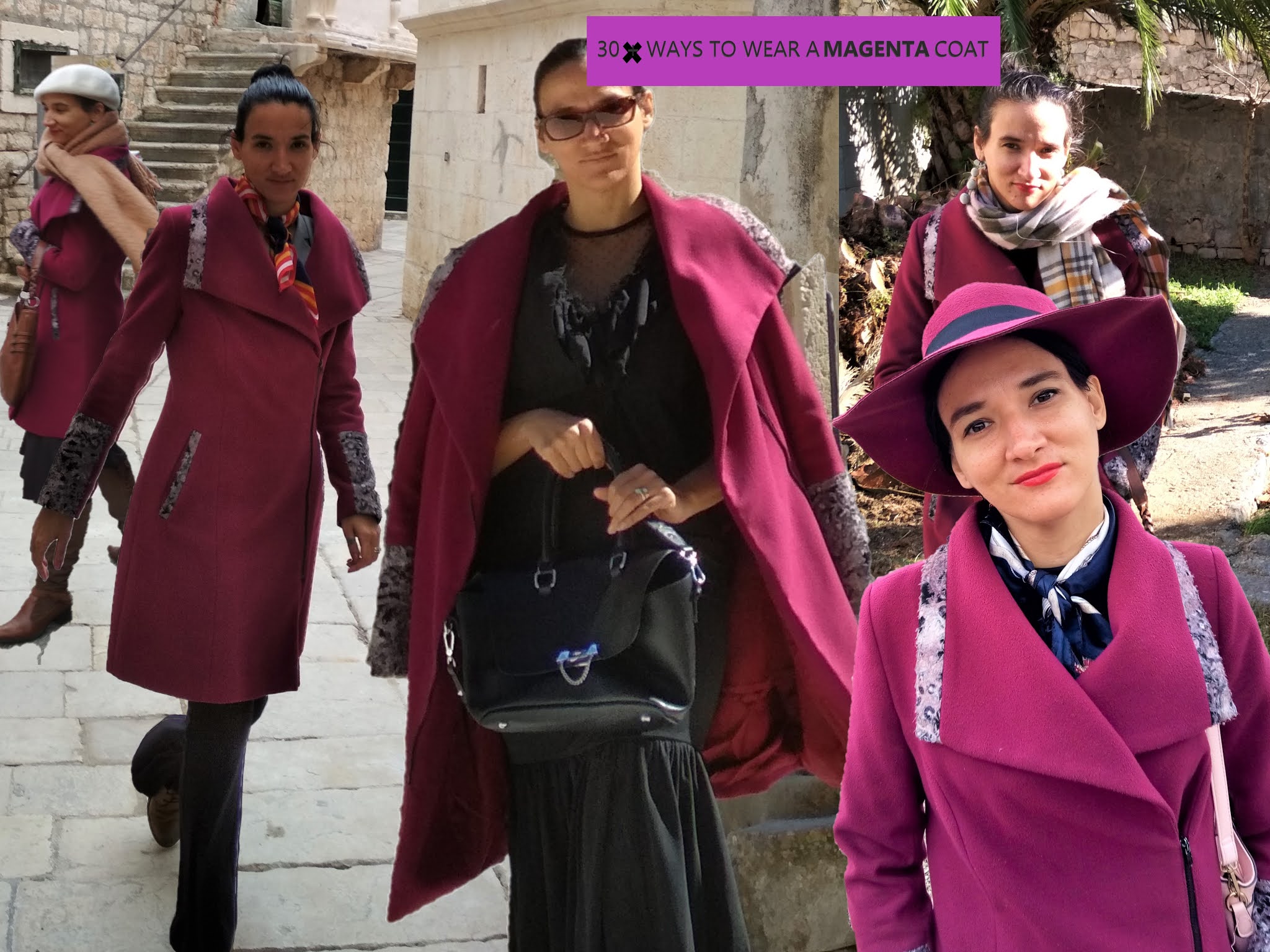 Hello readers. How are you? I hope you're doing well. Today just a quick post focusing on sustainable fashion. There are many ways you can be more sustainable in your fashion choices from shopping vintage or second hand to recycling your outfits and wearing your clothes as much as possible. Shopping your closet is perhaps the most economical way to be fashion sustainable as it doesn't cost you anything. Indeed, one of the ways you can reduce your carbon print is by avoiding fast fashion and excessive consumerism by wearing what is in your closet.  Today I'll show you plus thirty ways to wear a magenta coat. I'm sure I wore it even more than that, but these are the outfits I found browsing through my archives. I purchased this coat three years ago in a local store. It was made locally (I do try to support the local brands when I can). I already did a similar post devoted to this coat but then I was on less than 20 wears while now I'm on plus 30. One of the things I l
Read more 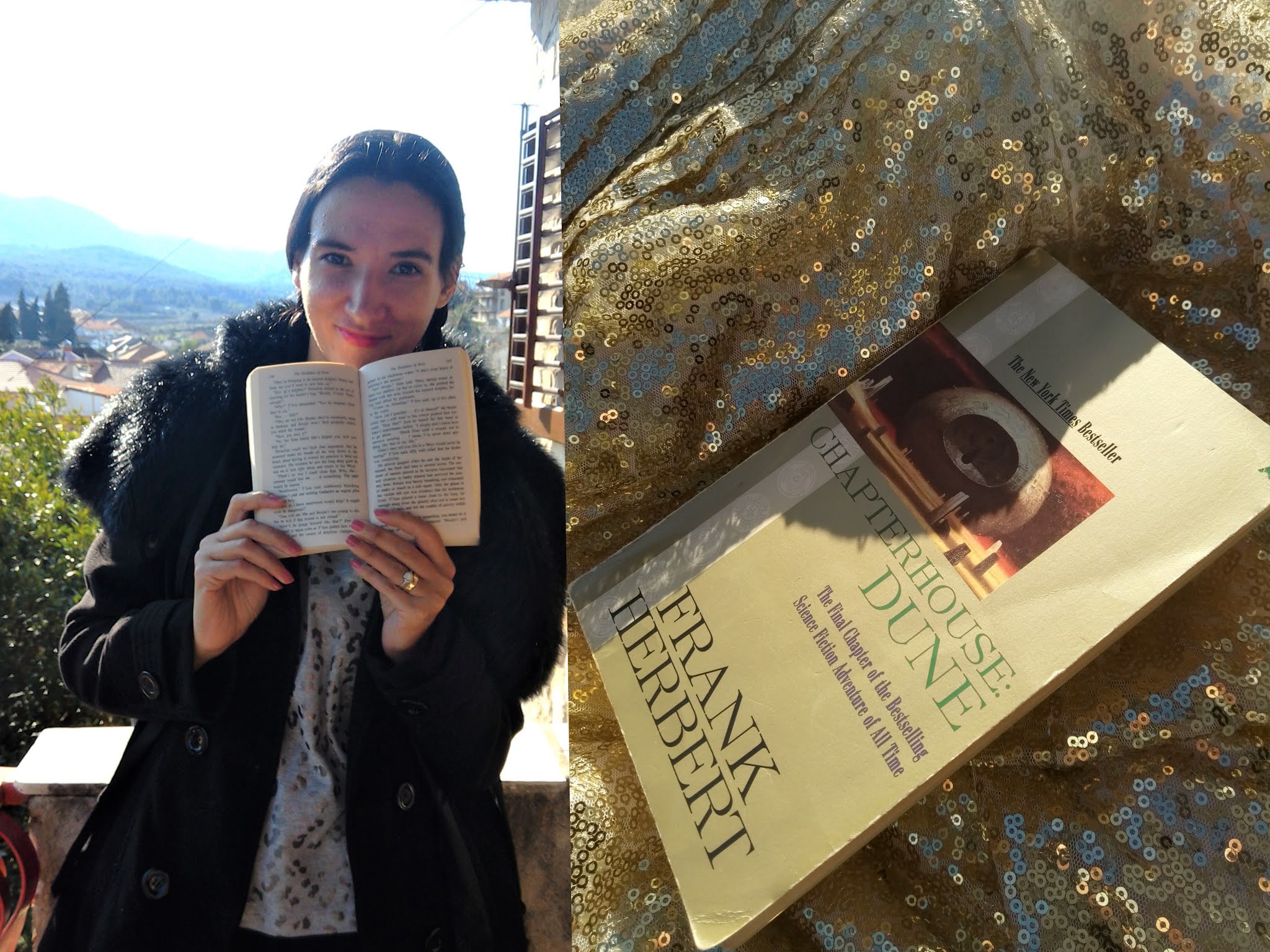 Hello, readers! This February I reviewed the first three books in the Dune series: Dune , Dune Messiah and Children of Dune . Today I will review the three remaining novels in this series: God Emperor of Dune , Dune Heretics and Chapterhouse: Dune . Naturally, since I'm reviewing sequels and comparing them one to another, there are bound to be some spoilers. Do skip these reviews if you want to avoid spoilers completely. If you are a fan of Frank Herbert, I also reviewed  and recommended some other works of his such as novels  The White Plague and The Godmarkers , so feel free to read those reviews as well. Scroll down to read the fourth, fifth and sixth novel in Dune Chronicles.  GOD EMPEROR OF DUNE, BOOK #4 IN THE DUNE CHRONICLES I absolutely loved this book even if some see it as a weaker work. God Emperor of Dune is different from others novels in the series, and while I can understand why it might be off putting to some, for me this is the most beautiful and personal narrati
Read more