IS MOSTAR A GOOD EASTER DAY DESTINATION? PLUS A SPRING OUTFIT PROPOSAL

April 20, 2019
Luckily for me, Mostar is an excellent Easter day destination. You see, I had travel plans for this Easter weekend, but I caught a bad cold so I decided to stay in the city I'm currently based in. That's actually not a bad thing because (if you ask me) Mostar makes for a great Easter day destination. Naturally, I've would have loved to visit my family, but since that wasn't possible, I'm happy to be spending Easter in Mostar. I've already cleaned and decorated my home for Easter so I'm all set. I've also prepared an outfit proposal but more about that later on. First I'll talk a bit about Mostar. Why is Mostar such a great spring destination? I can think of a number of reasons, but from top of my head I would say wonderful climate, beautiful landmarks and interesting history. Mostar is gorgeous in spring time. With its seven rivers and a number of lovely parks, Mostar can feel like a city oasis. 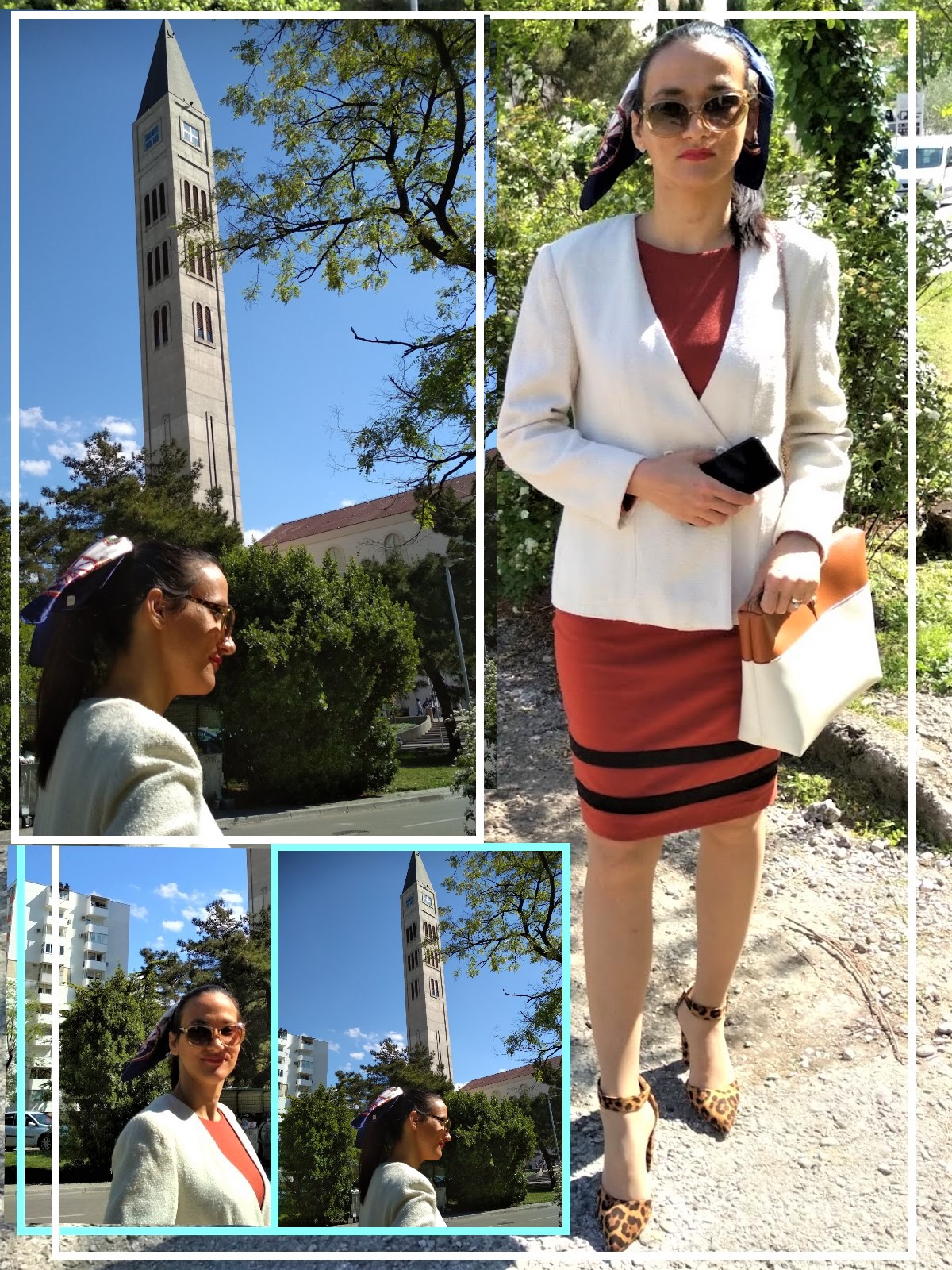 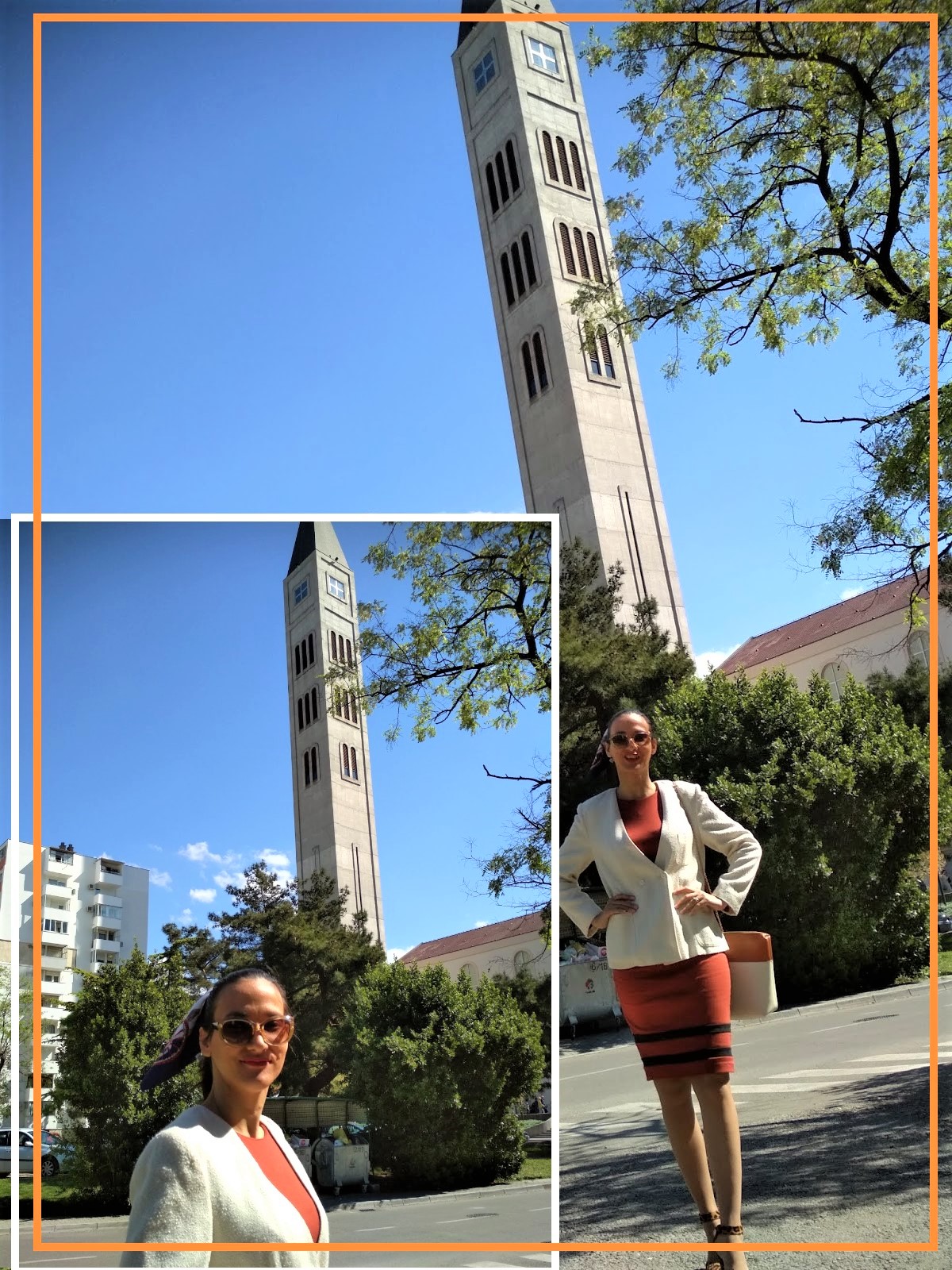 Spending Easter in Mostar is something I would definitely recommend. If you are a believer, there are also plenty of churches where you can attend the holy mass. The multicultural environment makes it perfect for lovers of history and culture. According to the last population count, there are 105, 797 people living in Mostar (48.9 % Croats,  41.1% Bosniaks and 4.1 % Serbs ) so as you can see it is a multi-ethnic town. Mostar is also multi-religious, Catholicism, Orthodox Christianity and Islam are the three main religions present here. Today I'll talk a bit about some of Mostar's churches. I'll present two of the larges catholic churches in Mostar to you. The first one is the church and monastery of Saint Peter and Paul. The second one is the city's cathedral. If you want to see a more detailed view of these two imposing churches, you're welcome to check my posts here and here. 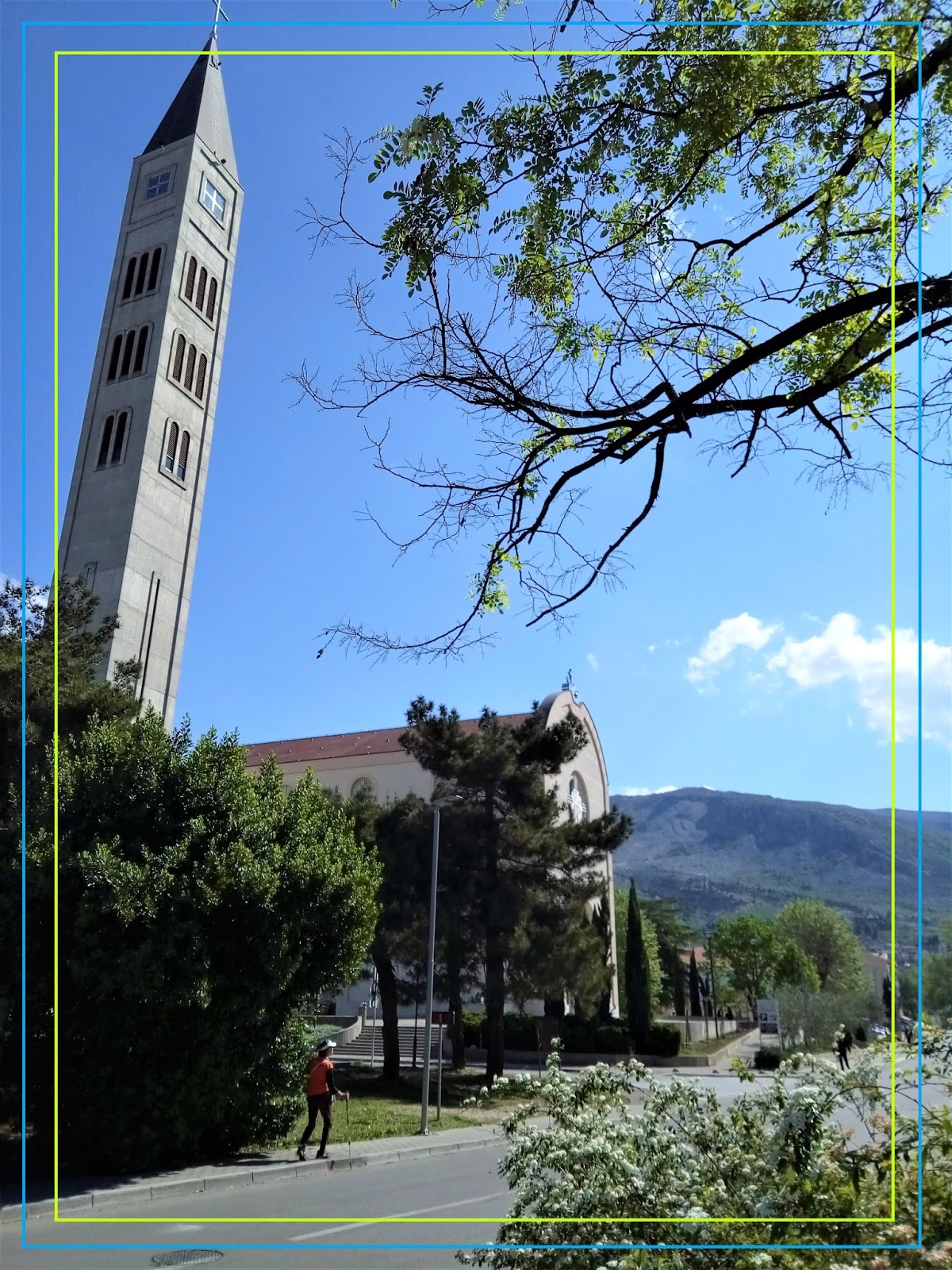 THE CHURCH AND THE MONASTERY OF SAINT PETER AND SAINT PAUL, MOSTAR
People who aren't from Mostar often mistake this church with the city cathedral. I know I used to do  so in the past. Like many others, I assumed it was the cathedral because it is so grand and impressive. This church and monastery are actually quite new. This church of Saint Peter and Saint Paul is newly built because the old church dating back to the 19th century was completely destroyed in the war. It was rebuild in recent times and now it also includes a large monastery and a church tower. The church of Saint Peter and Saint Paul can also boost with an impressive library that contains 40,000 volumes of old and vintage books. This complex is a very imposing structure with its church tower that stands 107 meters tall. If you're not afraid of the heights, I recommend paying it a visit. The view from 107 meters is quite majestic. As you can imagine, the view from this bell tower offers an amazing panorama. There is an elevator that takes you almost all the way to the top, so you just need to climb for a little bit. Make sure you bring warm clothing, at 107 meters it can get windy. I'm not entirely sure about the admission price, I think I payed around 3 euros when I was there last. There is no fee for entering any of the churches in Mostar that I know of, just this bell tower. I enjoyed visiting it, even if personally I think three euros is a bit pricey, the view was still worth it. 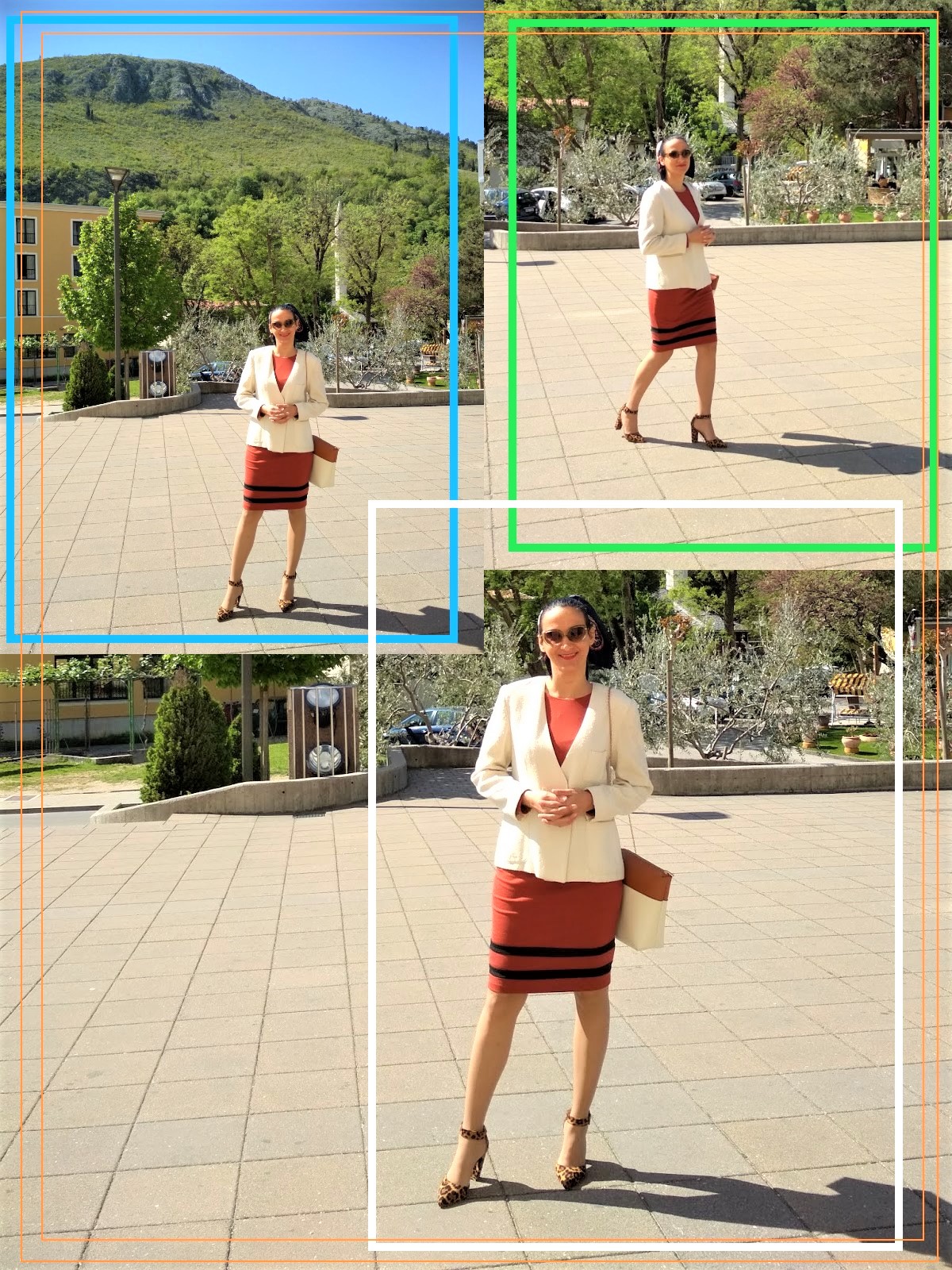 Behind the church, there is a lovely cafe and snack bar Campanile where I often stop for a cup of coffee. Besides beverages, they serve cakes and ice-cream here. At Campanile, they also sell souvenirs, sweets and books. Possibly they also offer some other services. Anyhow, it is a peaceful place to stop by for a cup of coffee. After mass, it can get a bit crowded, but generally speaking, it's one of a more chilled places with a lovely terrace outside and black and white photographs of Mostar city inside. There is another cafe across the street and the coffee there is just as good. There are also a number of small hotels and motels in the immediate vicinity where you can order coffee as well. I can probably name the nearest cafe serving establishment anytime anywhere. I've developed a  bit of caffeine dependency, I'm afraid. I love tea just as much as coffee. Anyhow, there are literally hundreds of cafes in Mostar and most of them serve excellent espresso and tea. 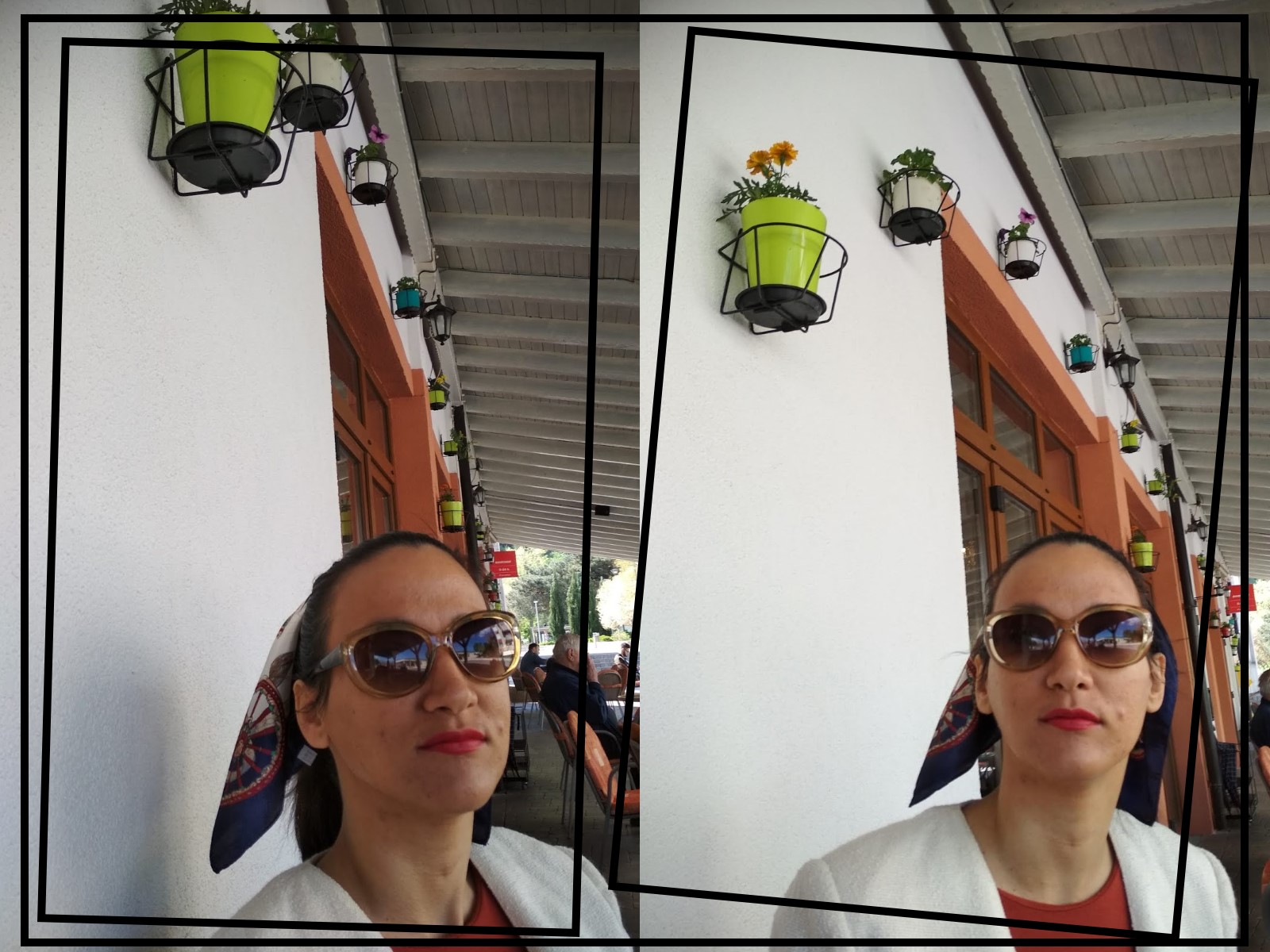 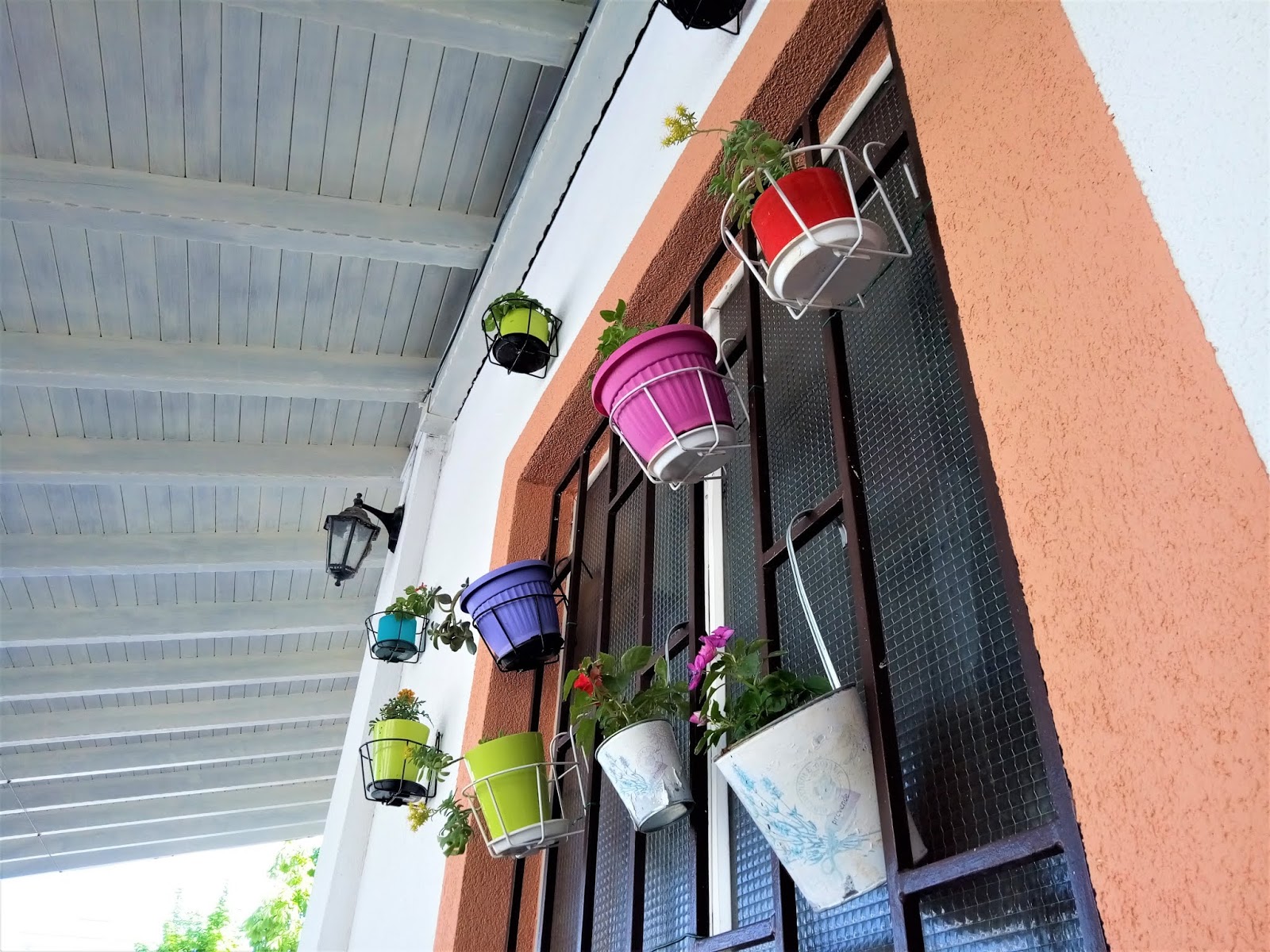 OUTFIT PROPOSAL OF THE DAY: ORANGE DRESS AND LEOPARD HEELS

Now, before we move onto the next landmark, I'll say a few words about my outfit proposal. I wore this outfit to church yesterday. We originally went to Saint Peter and Saint Paul church to pray but as it was still closed (it was very early in the morning), we went to the city cathedral that was luckily already opened. I like the colours of this outfits, I think I'll wear this outfit on repeat. Orange, white and brown seems like a good combination of colours. The orange dress I'm wearing is a designer piece (from a local brand Bellissima), the white blazer is vintage and the bag was a gift. I wore this dress with leopard heels and a white bag to keep the colours in tone. I also added a scarf as a finishing touch. I do like this trend of wearing scarves in one's hair, it's tres chic, don't you agree? If you pay attention to the background, you'll see how fabulously green Hum hill is this time of year. It makes me want to climb it asap. 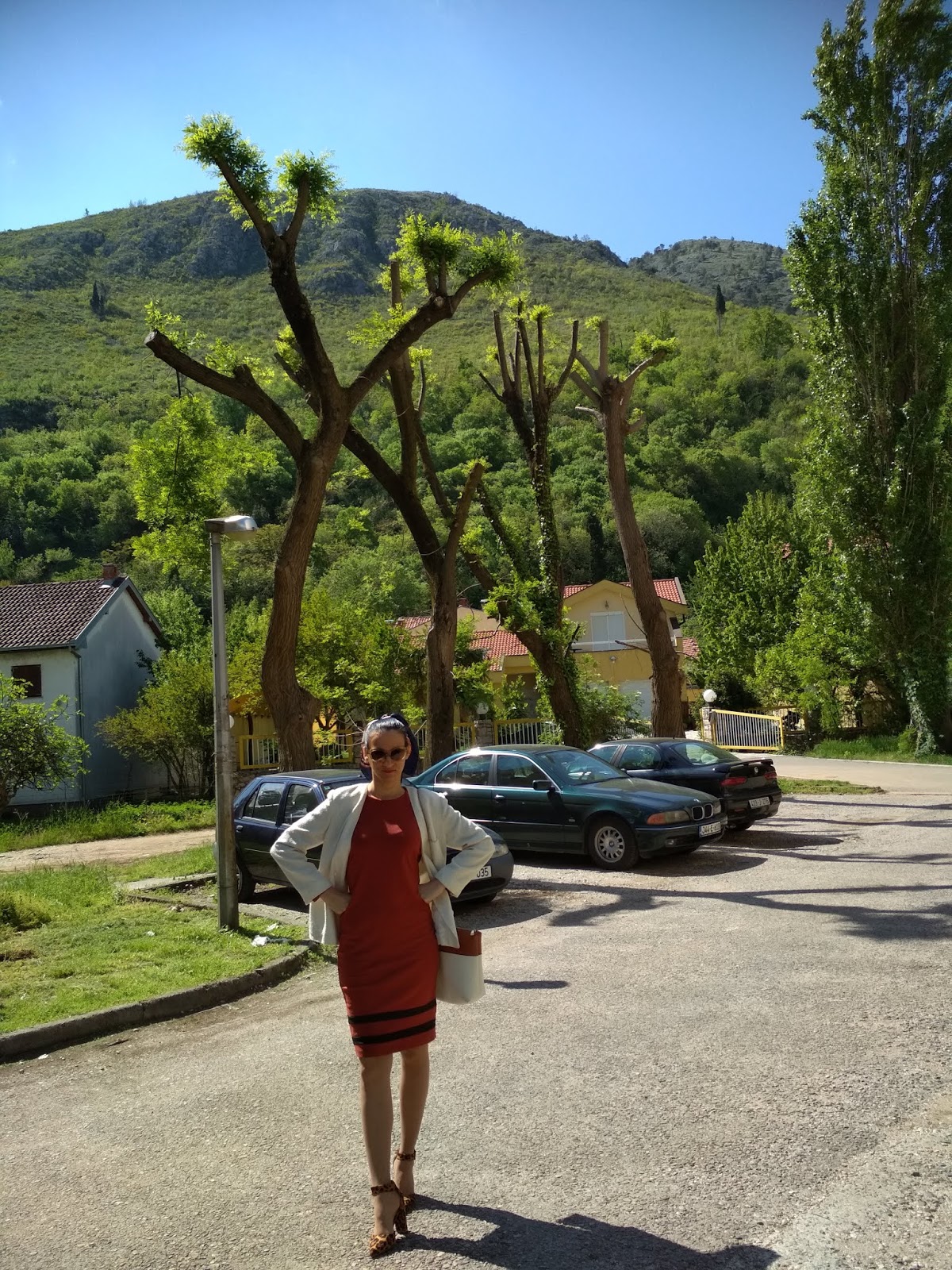 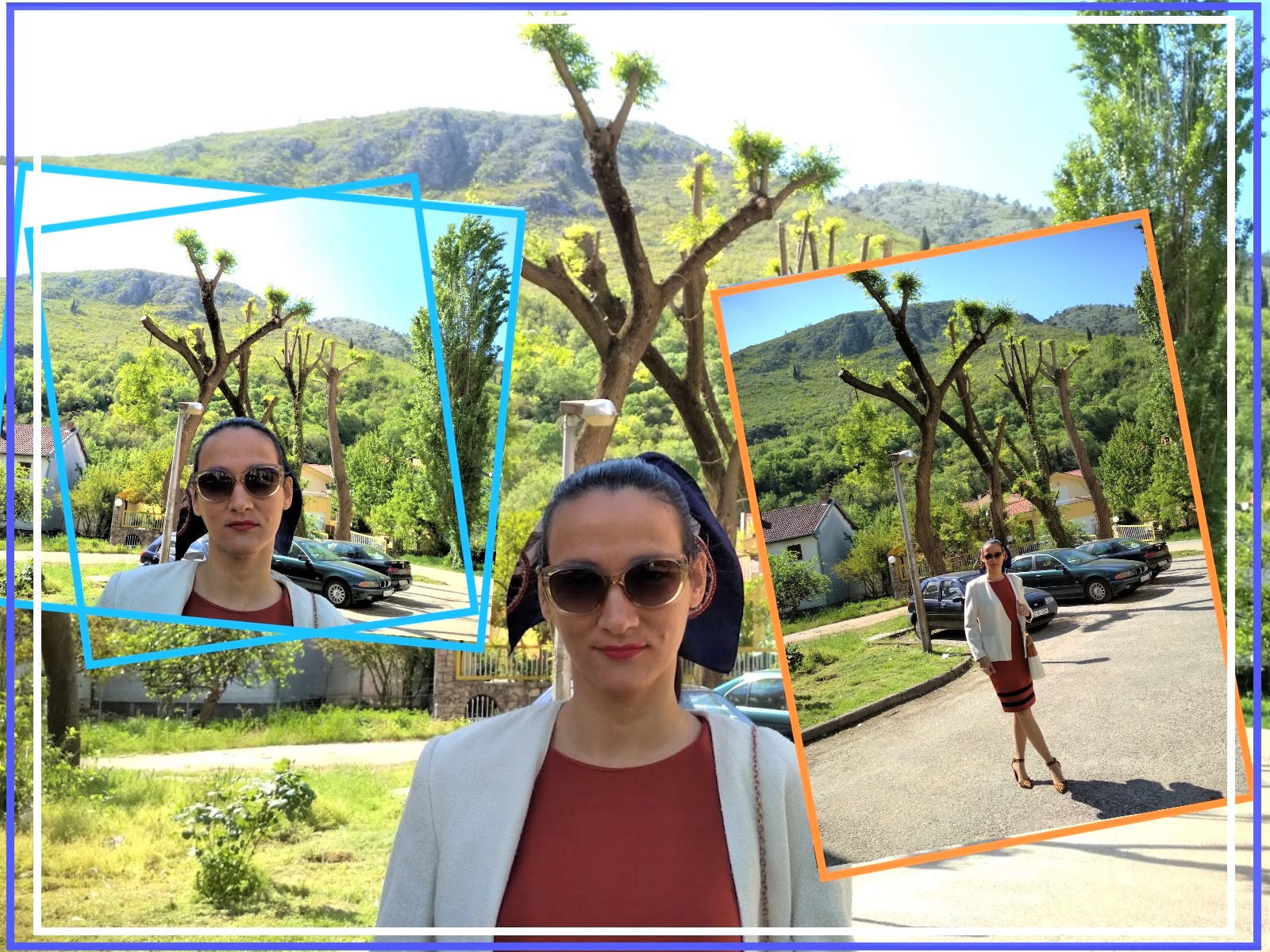 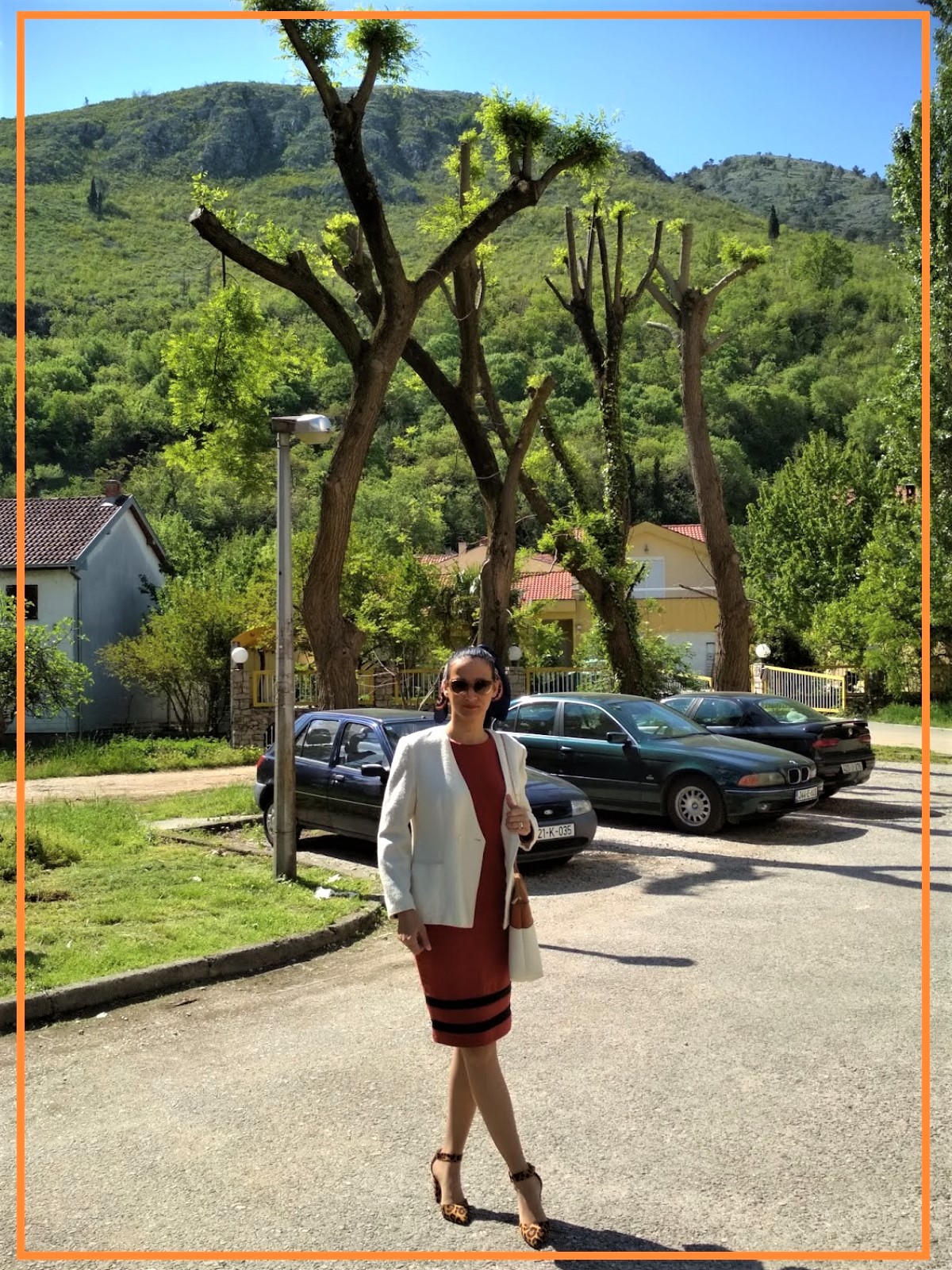 THE CITY CATHEDRAL, CHURCH OF MARY QUEEN OF SKY AND MOTHER OF CHURCH

Mostar's city cathedral is quite modern in design.  Its official name is Cathedral of Mary, Queen of the Sky and Mother of Church. Mostar's city cathedral was build in the eighties and the time period marked it in many ways. It is because it was build during the communism that its size was limited. The bell tower was added later on because of the same reason: communism. Despite the legal restrictions for religious building that existed during communism,  the cathedral has a nice design. The inside of the church makes me think of mountain churches for some reason. It is not something I'd expect in a Mediterranean church, but then again its design is modern.  The cathedral is located in vicinity of bishop's residence, that is as far as I know, not opened for viewing. 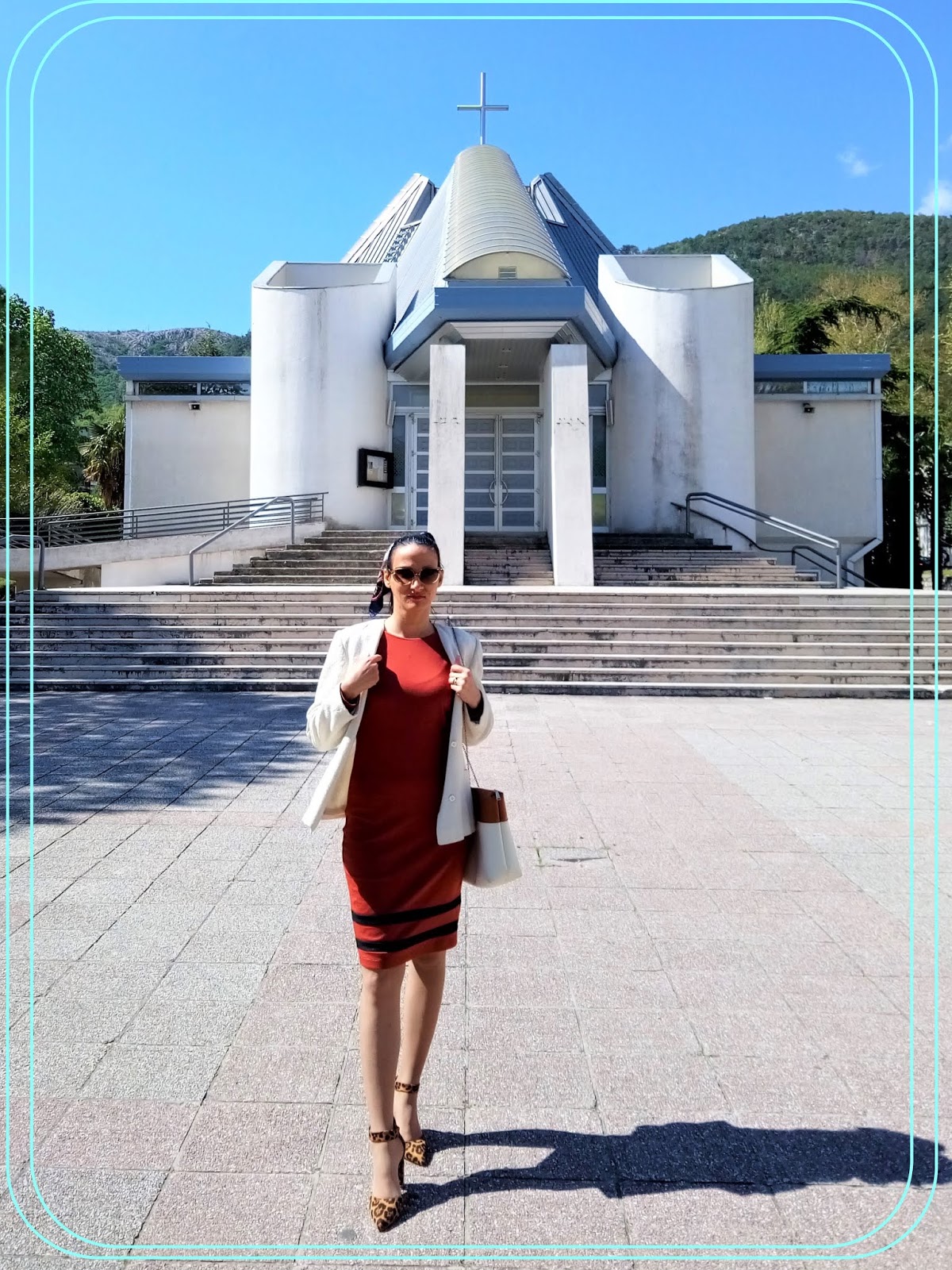 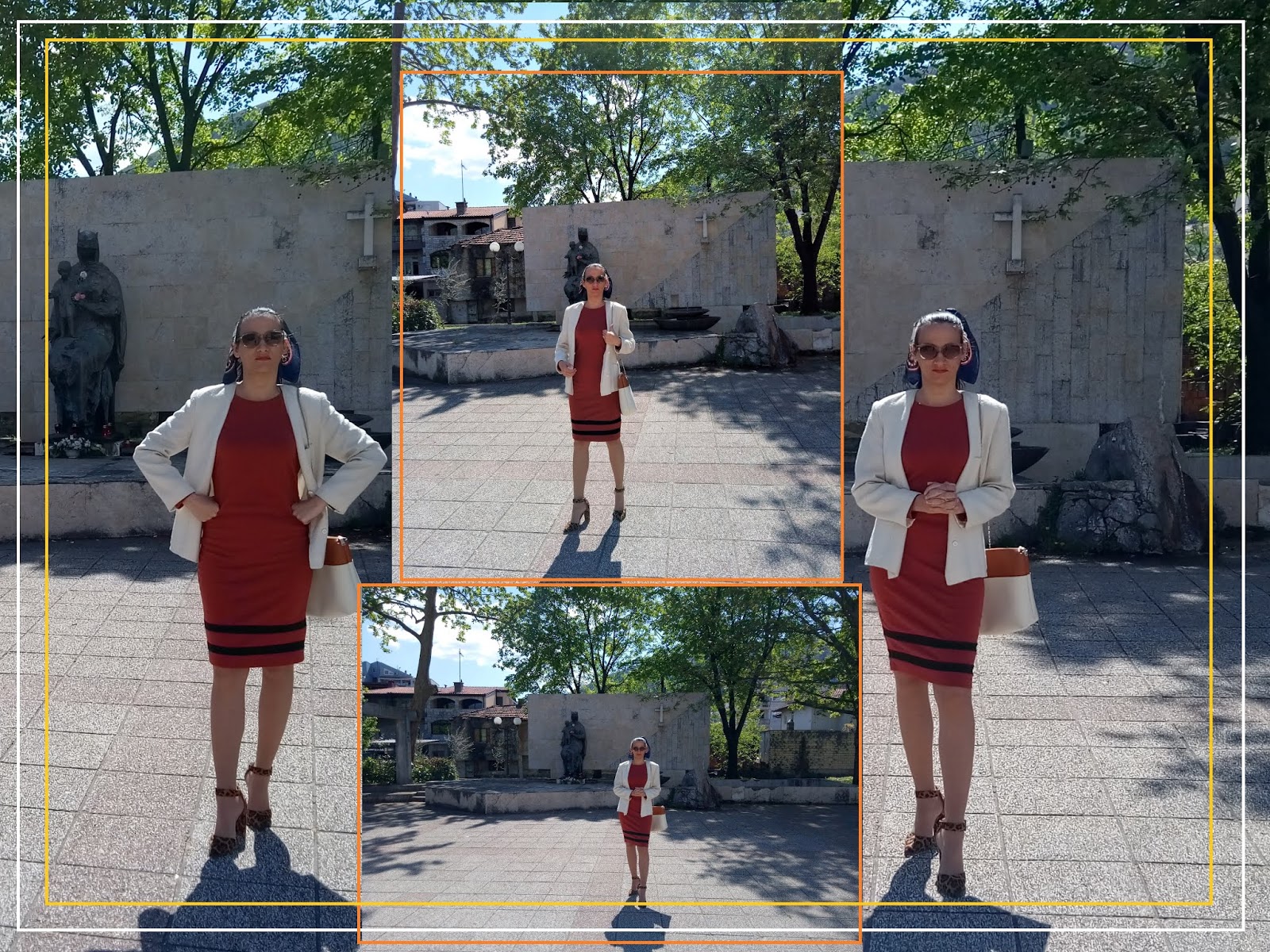 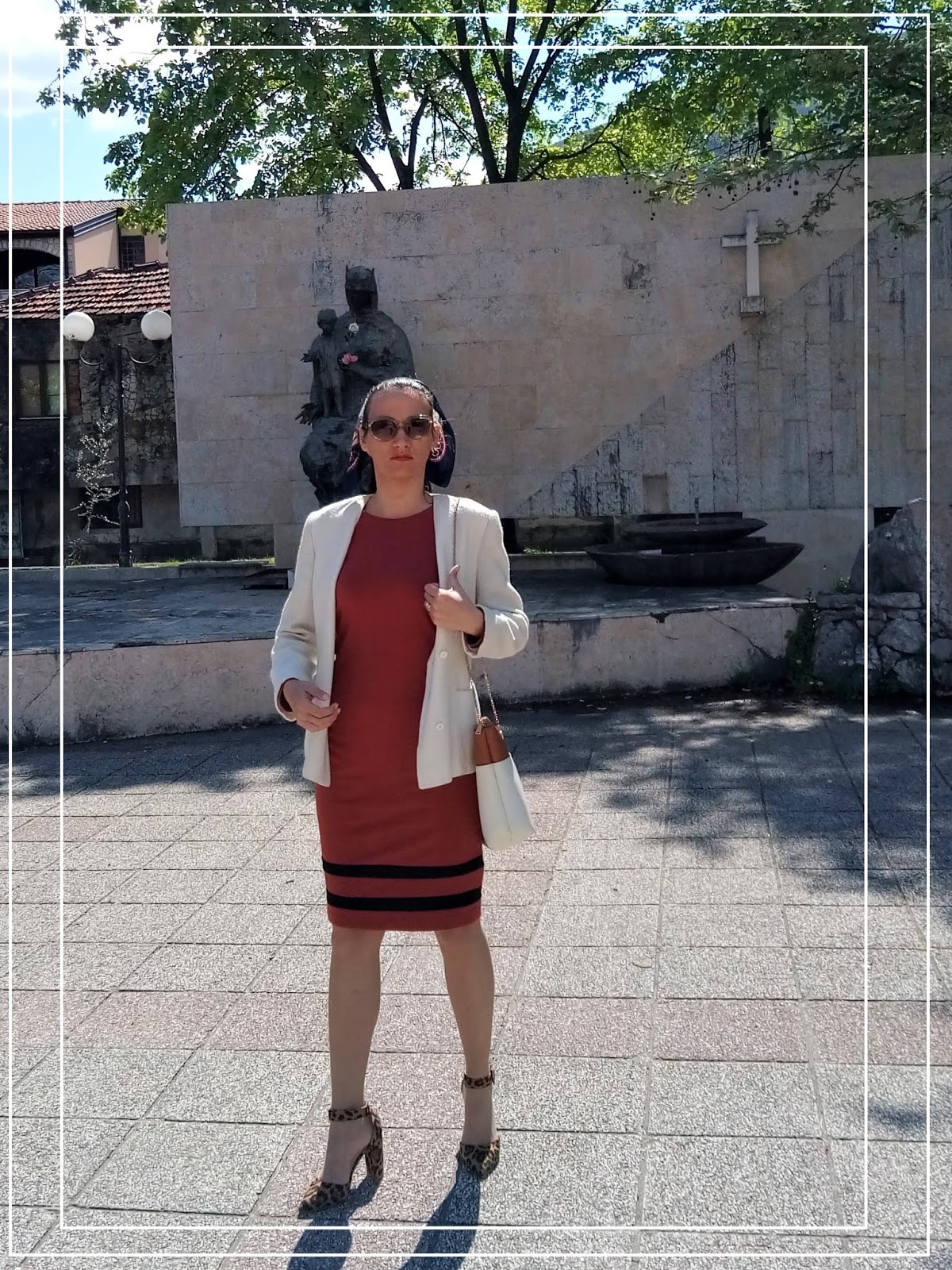 That would be all for today. Are you ready for Easter? As I already said, I'm all set. I took all day to clean my house, prepare the decorations and everything for Easter. I really enjoyed decorating my home this year. I didn't buy any new decorations because I'm trying to be more environmentally friendly. Instead of buying new decorations, I just improvised a bit and used the old ones in a new way. I also coloured my Easter eggs using wine, which is a natural and non toxic way of colouring eggs that I can totally recommend. All you need to do is place the eggs in wine, boil them for about twenty minutes and then left them in wine over night. In the morning, you just place them on a napkin and let them dry. You can use the left over wine for cleaning purposes. I've already blogged about non toxic ways to colour eggs, but I can prepare another post if you're interested. 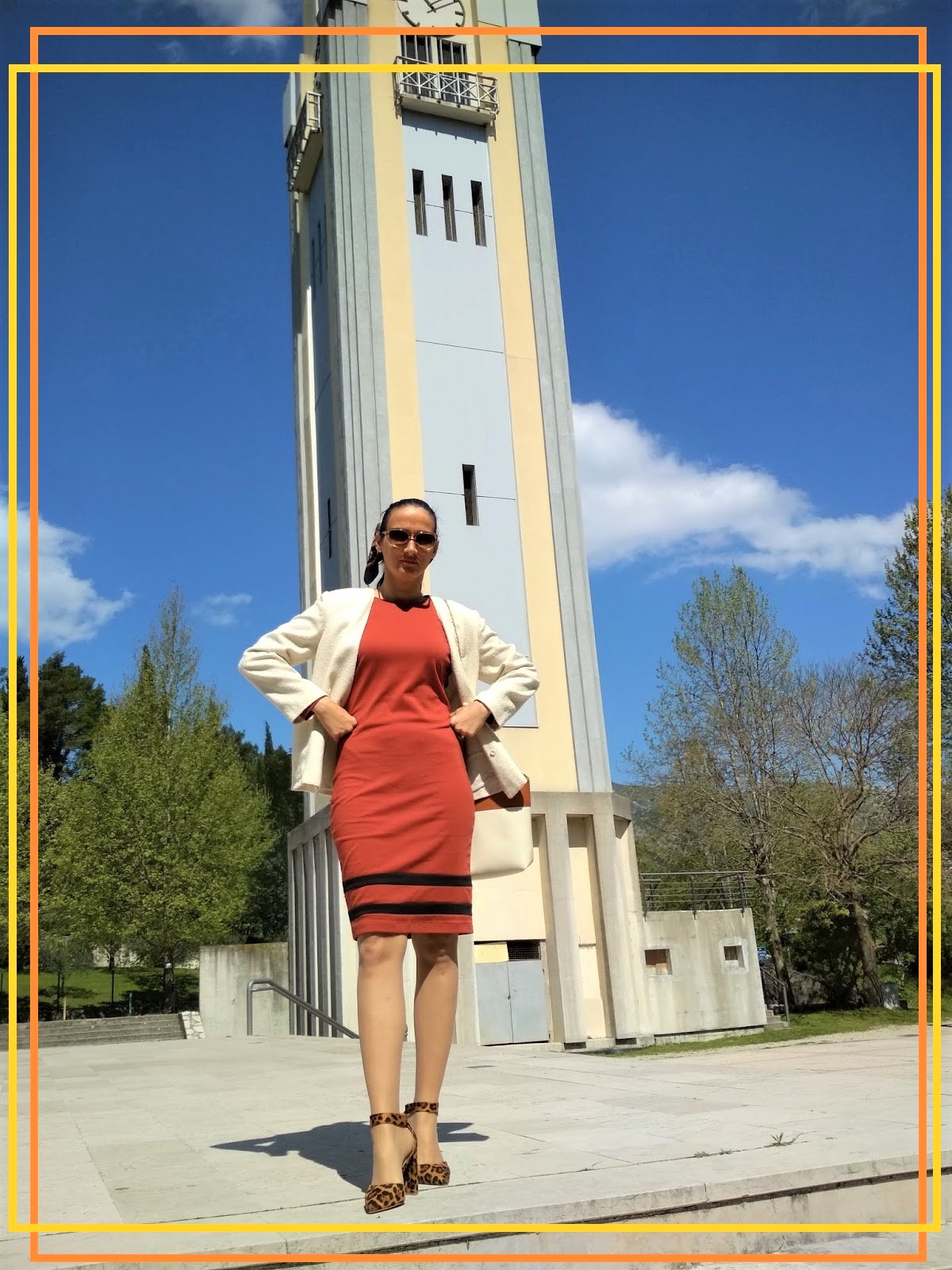 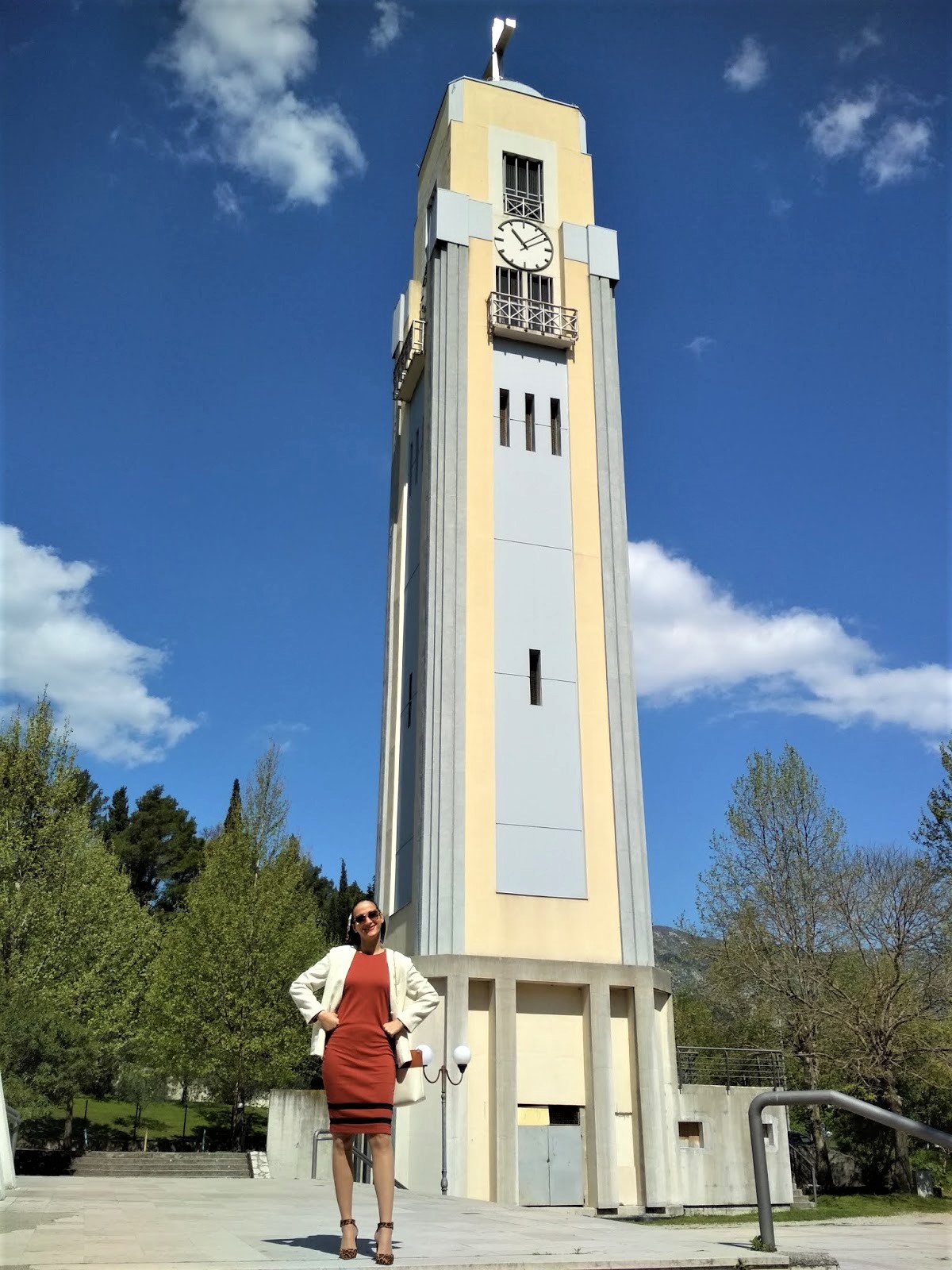 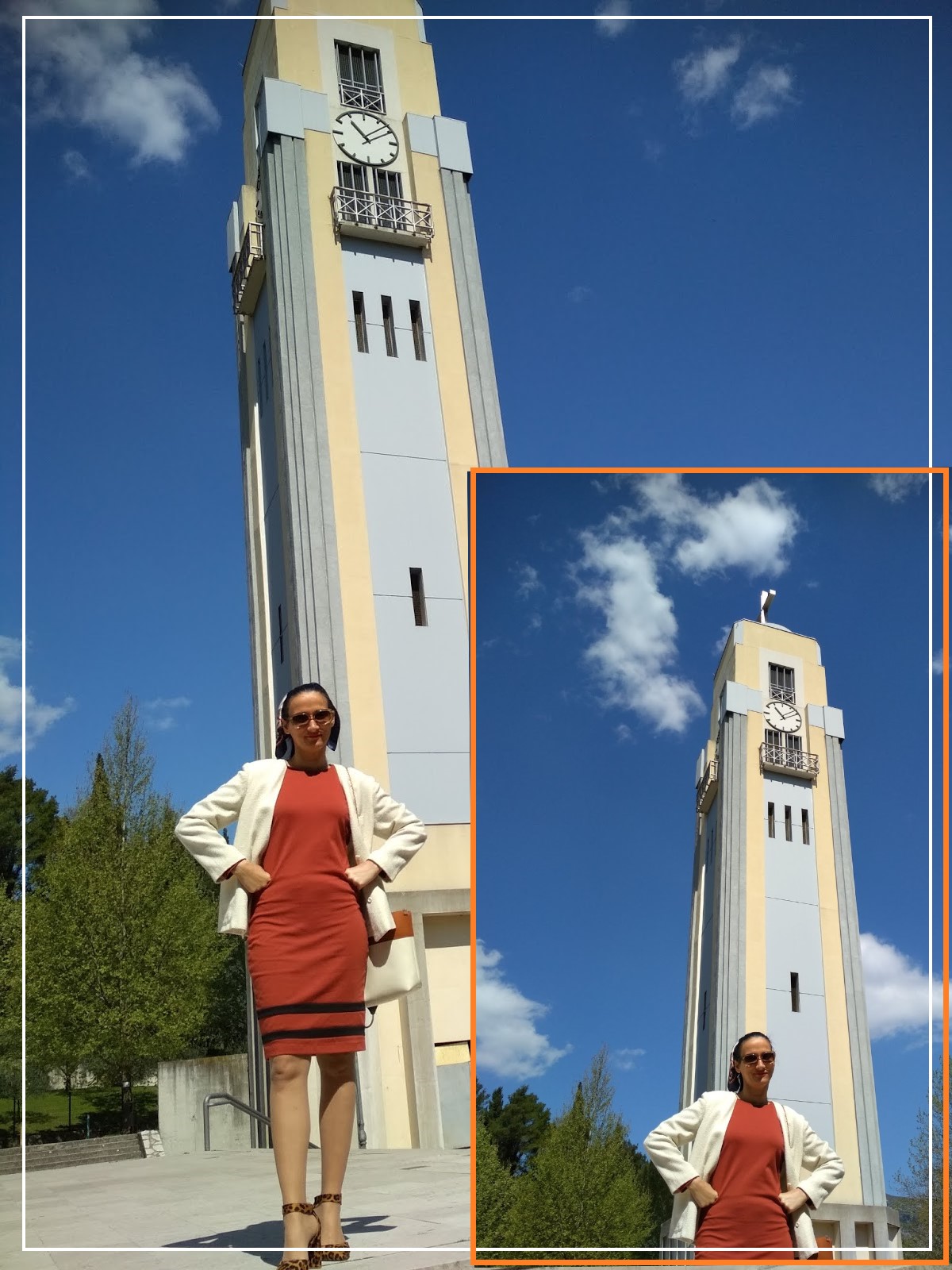 Thank you for reading. Have a great weekend! Happy Easter day to those who celebrate it!

I've linked up this look to Modish Matrons link up and Mica's weekly wear link up.

HOW TO STYLE RED CLOTHING ITEMS FOR WINTER?

January 22, 2020
A few posts ago (yes, bloggers calculate time in post activity), I wrote about red accessories for winter but I also wanted to write about red clothing items you can wear this time of year. In fact, I was planning to write a big post about wearing red in winter but I realized that I need to split it in two because it was too long. Apparently, I have a lot to say about why wearing red in winter is a good idea. So, today I'll basically post the part two of my red in winter fashion musings. Red is a bold, energetic and dramatic colour. If you ask me, wearing red is a great way to invoke good luck in our new year. You can pair red with neutral colours to tone it down or with vibrant ones to make your outfits even more noticeable. Lunar Year festivities are a perfect time to embrace the red clothing items. Moreover, Valentine's Day is not too far off either. If you're looking for some winter red outfit inspiration, you have come to the right place. HOW TO WEAR RED IN WINTER?   My…
86 comments
Read more

VISIT MALA STINIVA BAY ON ISLAND HVAR WITH ME (PART 1)

January 26, 2020
Today I'm taking you to Mala Stiniva Bay on island Hvar. I might talk for a living, but before this beauty I was left speechless and it's not even the first time I have visited this place. If you remember, I blogged about Mala Stiniva Bay back in 2018 and I originally visited it a few years prior to that rather lengthily travel post. My husband loved this place, so I promised to take him back some time. We went there last week. After I finished working, I put on a pair of white sneakers and drove there. When we got there, we just stared at this bay because it is so overwhelming beautiful. Now, that says something coming from someone who spent most of their summers on this island, mind you. Even for high standards set by island Hvar, this bay is enchanting. Most bays on island Hvar are absolutely gorgeous, but somehow this one stole my heart.  Mala Stiniva Bay belongs to Poljica village on island Hvar (not to be confused with a group of villages located on Dalmatian coast that…
40 comments
Read more